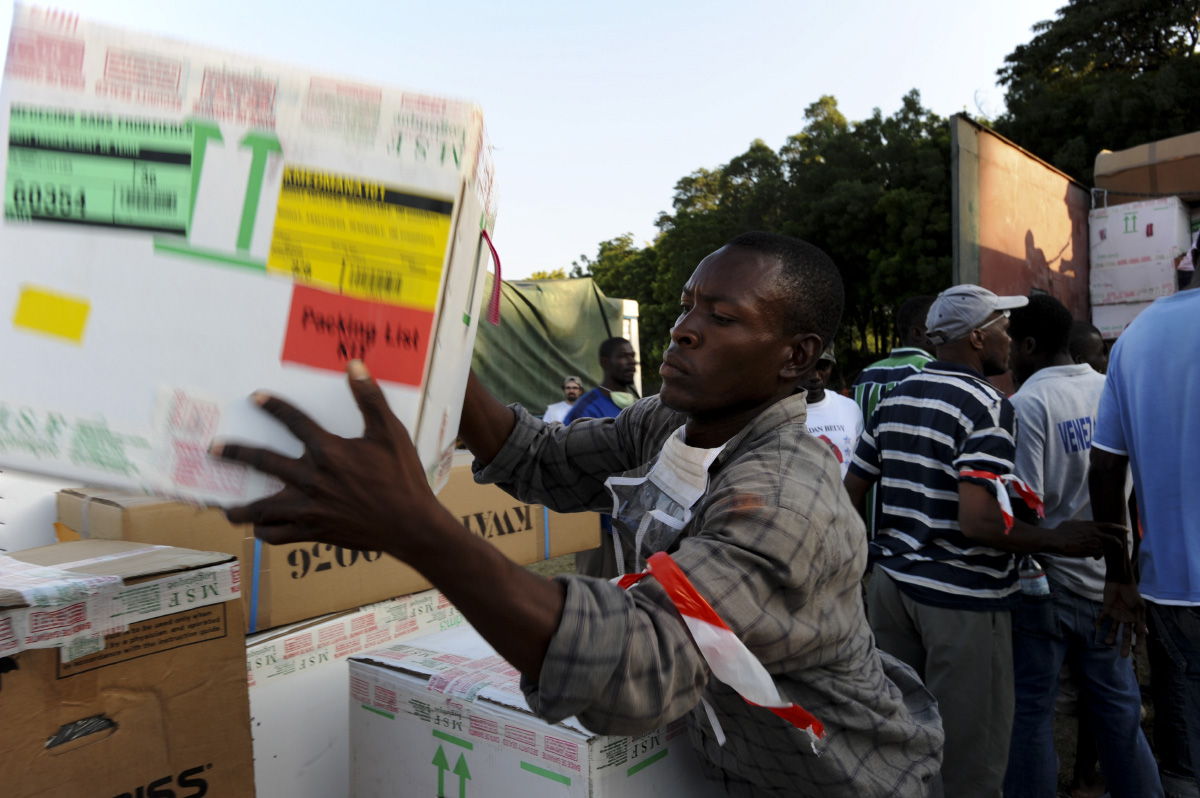 Haiti: The emergency phase is not over

Dr Marie-Pierre Allié, president of Médecins Sans Frontières-France, who recently returned from a field visit to Haiti, analyses the situation there one month after the disaster. At present, areas of concern include the vacuum caused by the withdrawal of some of the international medical teams who rushed to the scene after the earthquake, the ongoing lack of shelter and the slow pace of aid distribution.

In Haiti the need for aid was unusually extensive and deployment was necessarily slow and perceived as inadequate.

One month after the earthquake, what is the situation in Haiti?

The extent of the destruction that I observed in the field is very unusual. This disaster leaves a profound impression even on those with prior experience in natural disasters, even after seeing the images over and over. In some places, families are living in the rubble of neighbourhoods that have been completely destroyed. In other areas, the buildings still standing seem to be very unstable and dangerous. According to the United Nations, approximately 500,000 displaced persons have moved to more than 300 resettlement sites in the capital, but this is just part of the problem. We are talking about a capital city of 2.5 million people where almost no one is sleeping under a roof at this point.

Some of the residents – about 20 percent – have left Port-au-Prince. Nearly everyone else is sleeping outside, in public areas or in front of their house, whether it is standing or not. At the same time, there is a certain return to normalcy. Markets have resumed, businesses are open and the clean-up is proceeding.

This impressive resumption of activity contrasts with an ongoing lack of organisation, one month after the earthquake. It's still hard to obtain access to food and shelter, both of which are limited. There is a visible and obvious humanitarian presence in some areas and practically none in others – with no apparent coherence with the extent of the destruction. Overall, basic needs are not yet being met, which inevitably creates tensions and, possibly, security risks in the long term. In addition, many people need mental healthcare to deal with the trauma they have experienced – loss of family and destruction of their home – and to confront the precariousness of their current situation. There is a sharp contrast between the massive mobilisation abroad in terms of donors and the emergency aid that has been sent, and in the field, where this aid is reaching with difficulty a population that feels it's being ignored.

What are the priorities?

We are not out of the emergency phase yet. At this point, there are two particularly important issues. Overall, it is essential to provide shelter faster. When hundreds of thousands of families are living unprotected from the weather, in crowded sites with few latrines, you have a major health risk. No epidemics have been noted to date, but living conditions could promote the spread of a host of illnesses, specifically diarrhoea and skin infections. The rainy season begins in a few weeks and we could see increased respiratory infections. We are already observing a spread of these illnesses among our patients.

According to the UN Office for the Coordination of Humanitarian Affairs, fewer than 300,000 people have obtained temporary shelter. In some cases, it is no more than plastic sheeting. Only approximately 20,000 tents have been distributed; five times that number are needed. Our teams have begun distributing tents, primarily to patients who leave the hospital and to 1,800 families in a camp near Saint-Louis. Additional distributions are planned.

The lack of housing also contributes to crowding at medical facilities. Some patients are healthy enough to leave the hospital and continue their treatment in an outpatient clinic. However, they remain hospitalised because they lack shelter suitable for continued recovery. Of course, we have to think about more long-term solutions and organise the reconstruction, but shelter – probably tents – and basic materials like blankets are needed immediately. Showers and latrines must be built right away. It's not a simple matter because there is not much space and many of the displaced persons want to stay in Port-au-Prince, because that's where the work is. In the immediate future, tents may provide temporary, moveable shelters. The search for long-term solutions must not deprive Haitians of shelter during the rainy season.

What is the most important issue?

Some of the emergency medical teams sent by other countries are leaving, although their patients still require treatment. Many of the wounded who were operated on need revision surgery and full post-operative care, which requires weeks of hospitalisation. Our teams have sharply expanded their post-operative capacity and continue to work on that issue. We are organising comprehensive services, including medical and nursing care, physical therapy and psychological support. The needs in this area are now considerable, but the resources are now being cut back. The public hospitals need to free up beds so that they can resume their normal activities.

It is premature for the other international medical teams to be leaving. It is too early for a return to normal. The rapid withdrawal of international teams after just a few weeks is not appropriate in a context like this, where many wounded people require care for some period of time. This is a recurring issue in this kind of crisis. We saw it in Pakistan after the 2005 earthquake, and after the tsunami.

Immediately after the quake, several countries positioned themselves to take charge of coordinating the emergency aid. Did this have a negative impact?

The massive mobilisation by certain countries to help the Haitians definitely had positive impacts. Significant resources were deployed, for example, to bring key infrastructure like the airport and port back into operation.

The next question is, again, one of priorities. Should the assisting country first set up its headquarters and ensure the comfort of its troops – or would it be a better idea to give the country's authorities the resources they need to carry out their role?

During a meeting with the Minister of Health in Port-au-Prince, I was struck by the very limited resources available to the Ministry's staff. The lack of coordination in the medical area posed a problem during the first two weeks. It occurred that our teams were assessing needs in a specific area and starting to work, while other teams wanted to launch their activities in the same place.

Large-scale natural disasters always bring political strategies and rivalries to the surface. They are also domestic issues because the public expects its country to provide aid. You have to make sure that these issues do not harm the effectiveness of aid operations. With regard to reconstruction, that is a matter for the Haitian government and society to decide. No other state has the legitimacy to make those decisions in the place of a country weakened by a natural catastrophe.

Given the current situation, have aid actors failed?

It's normal to see a delay of a few days before aid arrives in the field and a few weeks before resources are deployed to cover all needs. In Haiti's case, the needs are unusually extensive and the arrival and deployment of aid was necessarily slow and perceived as inadequate. This is a new kind of situation that involves massive destruction in a capital city. The Haitian government and the UN staff on site were harmed directly and physically, and took additional time to be able to organise an effective response.

The second factor is that essential infrastructure was largely destroyed. An entire section of the health system was unable to function. The roads and the main airport were destroyed and there was no nearby alternative because, as is the case everywhere, the main resources were located in the capital. There was a bottleneck that slowed the delivery of aid considerably.

Beyond logistical issues, aid deployment was also slowed by security conditions. All the actors are looking for solutions to be able to distribute aid. This is not unique to the Haitian context. The distribution of emergency aid is very often complicated, particularly, as is the case here, in an urban context. But you can't do just anything. To my mind, dropping foodstuffs by helicopter in populated areas, as we saw early on in Port-au-Prince, is a very counterproductive and dangerous action. It may be effective to quickly announce that tons of aid has been distributed but it creates a risk of accidents and riots, and the most vulnerable have little chance of obtaining any of the aid.