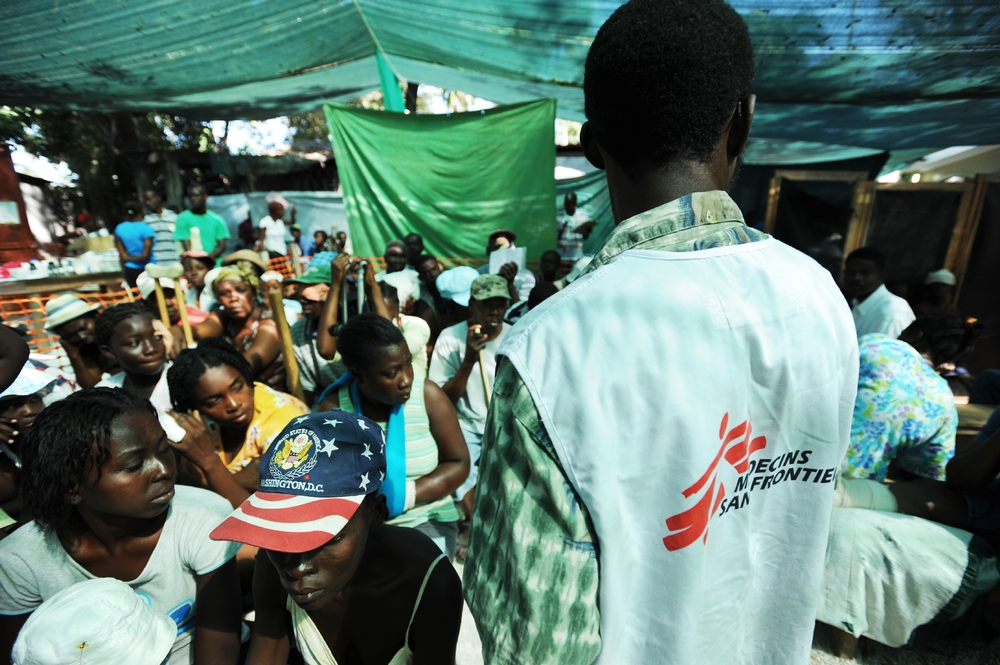 Five years have passed since a truly devastating earthquake shook Haiti, affecting approximately 3 million and killing 220,000 according to government estimates. What is the situation in Haiti now after five years of reconstruction efforts, and what healthcare does Médecins Sans Frontières / Doctors Without Borders (MSF) still provide in the country?

Five years after the earthquake

What is the overall medical and humanitarian situation now five years after the earthquake?

Before any sort of assessment of where we are now, we should remember that on the 12th January 2010, 60% of an already dysfunctional health system was destroyed in an instant. Furthermore, 10% of Haiti’s medical staff were either killed or subsequently left the country. This was quite simply catastrophic.

MSF had to relocate services to other facilities, build container hospitals, work under temporary shelters, and even set up an inflatable hospital. We had already been present in Haiti for the previous nineteen years, filling pre-existing healthcare gaps; we knew that most health systems would struggle with a cataclysmic event such as this, let alone one that was already struggling under normal circumstances.

Fundamentally, the vast majority of the Haitian people still struggle to access the healthcare they need. For example, the HUEH (Hôpital de l’Université d’Etat d’Haiti), the only public hospital offering orthopedic surgical care in the country, has still not been fully rehabilitated and so cannot run at full capacity.

Furthermore, while money has been spent on building hospitals, quite a few, such as one built in Carrefour, currently stand as empty shells because of inadequate planning to ensure proper trained staff, sufficient drugs, money, guaranteed maintenance and medical material to run them.

Julie Remy
Surgery makeshift area outside the building of the Carrefour hospital.

Has donor money improved the situation?

While progress has been made, we are not in a position to track the outcomes of the huge influx of donor funding into the country following the earthquake.

It is clear, however, that the massive influx of money that followed the earthquake in an effort to “build back better” in Haiti has not given adequate priority to healthcare. In part due to the presence of other actors and the reconstruction effort, it is true that MSF has transitioned away from running activities directly related to the earthquake response.

But we still find ourselves filling important gaps in the Haitian healthcare system, gaps that perhaps would not be present if some of these reconstruction projects had been better planned.

What are MSF’s priorities in Haiti?

MSF continues to manage four hospitals in the earthquake-affected area of Port-au-Prince and Léogâne providing emergency trauma and obstetrical care, neonatal emergency healthcare and treatment of severe burns. Despite the widespread urban violence and frequent intense traffic accidents, and a dramatic increase in the number of deaths from trauma from approximately 1 per 20,000 in 2002 to almost 1 per 10,000 in 2012, traumatology services are almost inexistent.

Julie Remy
In 2014 in its hospital in Tabarre alone, MSF treated 1325 violent trauma cases and almost 6500 accidental trauma cases, performing on average 130 surgical interventions a month. And despite high burns risk resulting from precarious living conditions and families living in single rooms, MSF runs the only major burns unit in the country.

Beyond these activities, until such a time as the Haitian Ministry of Health can take over, the other major priority remains cholera. Here, four years on from the disease’s reappearance in the country after a 150-year absence, the emergency response remains inadequate.

It should be clear to the Haitian government and its donor partners that cholera outbreaks will continue at least for the medium-term. Despite this, during an outbreak from September to December in 2014, the response system quickly stalled as funding was not released fast enough. MSF had to step in again and set up its own cholera treatment centres as well as give financial support to the Ministry of Health’s efforts to treat patients. Overall last year, MSF treated over 5600 patients with symptoms of cholera, more than half of whom came in a single peak from mid-October to mid-November.

There is no adequate system in place to provide urgent care, despite the existence of a National Plan for the Elimination of Cholera. The Haitian authorities, in collaboration with their international partners, must activate an emergency response and quickly integrate cholera case management into their health structures.

What more needs to be done in Haiti?

Healthcare needs to be a much higher priority for the authorities and their international partners than it is right now. The health budget is low, and in general we are seeing a transition away from an emergency humanitarian-based response towards a development-based one. While this is crucial for building a proper and functional healthcare system, it must not come at the expense of capacity to respond to emergencies in the present.

Julie Remy
Raphaël Delhalle, belgian nurse and a volunteer are explaining to a 12 year old boy with a broken leg and injured foot in Martissant that he will be transfered to Saint Damien Hospital for a surgery.

Funding mechanisms must be capable of releasing money in a timely fashion in emergency situations such as cholera outbreaks. In addition, we need more coherent planning from those involved in the reconstruction effort so that we do not have situations where hospitals are constructed without adequate thought given to how to staff them, finance them, and stock them so that they can actually function, which has been the case in some facilities up until now.

Over the ten months following the devastating 2010 earthquake in Haiti, MSF treated 360,000 patients, performed over 15,000 surgeries, and distributed over 50,000 tents and half a million square litres of water per day.

MSF currently manages four hospitals providing emergency trauma and obstetrical care, neonatal emergency healthcare and treatment of severe burns, and has additionally treated more than 204,000 victims of cholera since 2010, with a mortality rate less than 1 percent

Find out more about MSF's response to Haiti earthquake