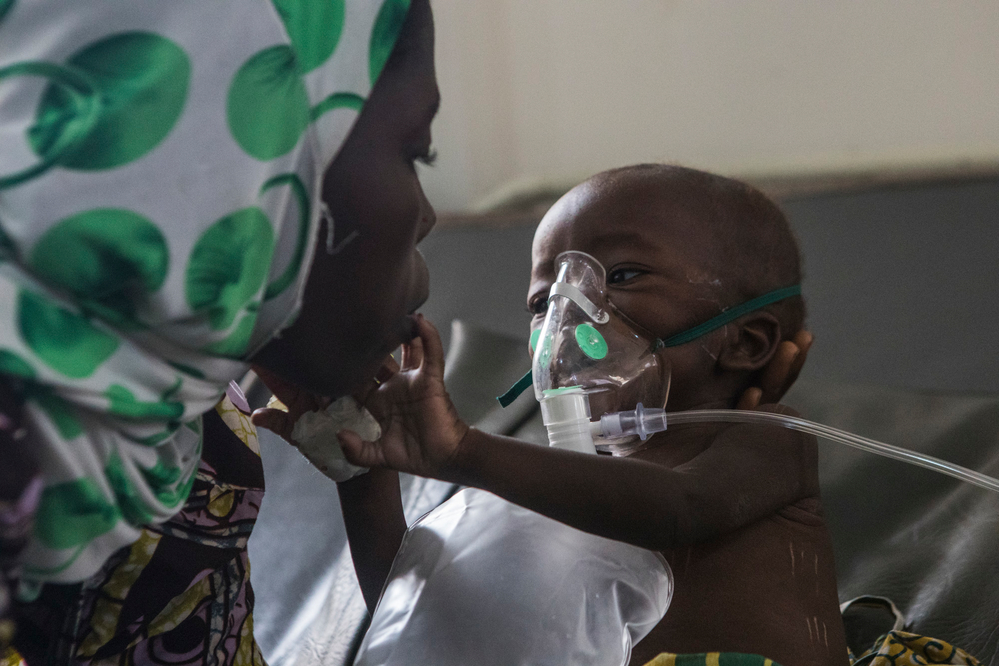 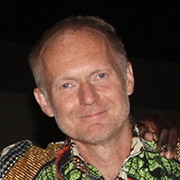 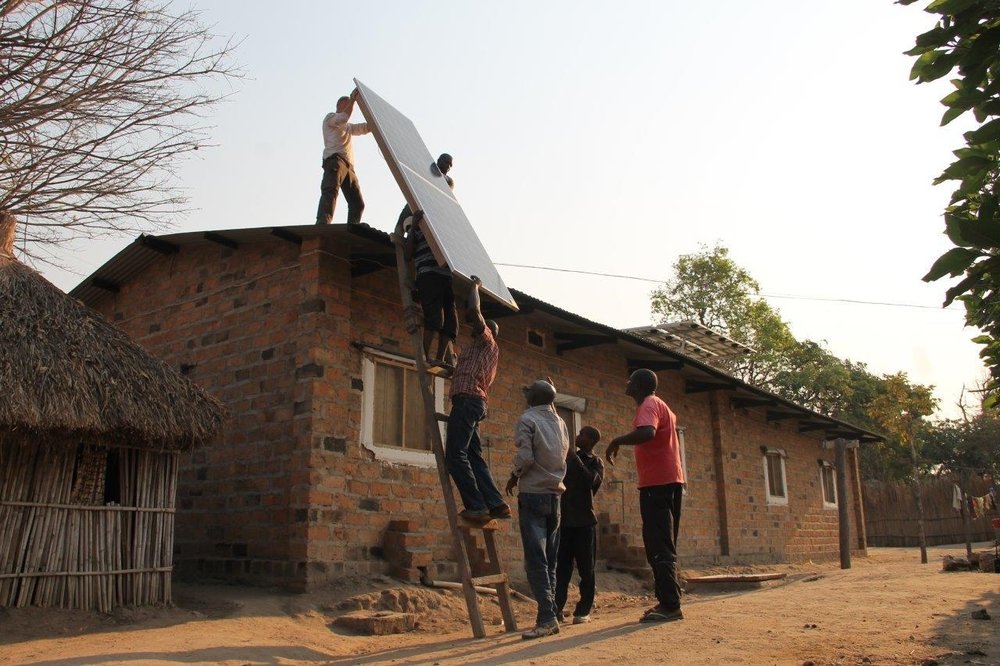 Per-Erik Eriksson/MSF
An MSF team is installing solar panels on the roof of Shamwana hospital, to make sure electricity remains on in the hospital and keeps the cold chain running.

Oxygen concentrators consume a great deal of energy. To power a single oxygen concentrator continuously takes over 100 litres of diesel per month. They require so much energy that in many MSF projects, they are the primary energy consumers.
The use of oxygen in MSF projects is increasing exponentially, as our doctors and nurses adopt new techniques for treating newborn babies, for instance. This means that providing an adequate supply of medical grade oxygen is a growing challenge.

The spark of an idea

On my first posting with MSF, I worked as a technical logistician in Shamwana, a remote village in the Democratic Republic of the Congo. After 10 years of providing medical care, surgical, reproductive and mental health services, the time had come for MSF to hand the running of the hospital over to the Congolese Ministry of Health.
There was one problem.
The hospital was extremely off-grid, and like many MSF hospitals and clinics, relied on deliveries of diesel fuel to run the generators. In MSF’s absence, these deliveries would not be sustainable. But without electricity from the generator, the hospital would not be able to turn on the lights, let alone the oxygen concentrators.
In the months before MSF was due to hand the running of the hospital over to the Ministry of Health, we had an idea. After a lot of phone calls, a scramble for supplies and a race against the clock, we managed to install a set of solar panels on the roof of the hospital, with batteries to store the energy. It was enough to provide electricity for lights, medical oxygen, and to operate a ‘cold-chain’ – the refrigeration necessary to keep some medicines effective.

The Shamwana project got me thinking. If it could work there, could solar power help to provide other  hospitals with a sustainable oxygen supply?  In Shamwana we’d used batteries to store the solar power and then to power the oxygen concentrators.  But the batteries only have a limited lifespan, and in remote areas can be expensive and take time to replace.
What if we could use the direct power of the sun to produce the concentrated oxygen during the day, and then store it so it was ready for use when needed? No batteries required.
A team of us decided to investigate. Some of us are from MSF's Innovation Unit in Sweden, and others are part of MSF's operational centre in Amsterdam.  We applied to the ‘Sapling Nursery’ - a fund that supports MSF staff to try out new approaches to the challenges of working in medical emergencies.  And they said yes.

Expensive to produce, risky to transport

Our research shows that MSF hospitals and clinics primarily rely on small, moveable oxygen-concentrators originally designed for patient home-use. Like the hospital in Shamwana, most are using diesel generators to power these. 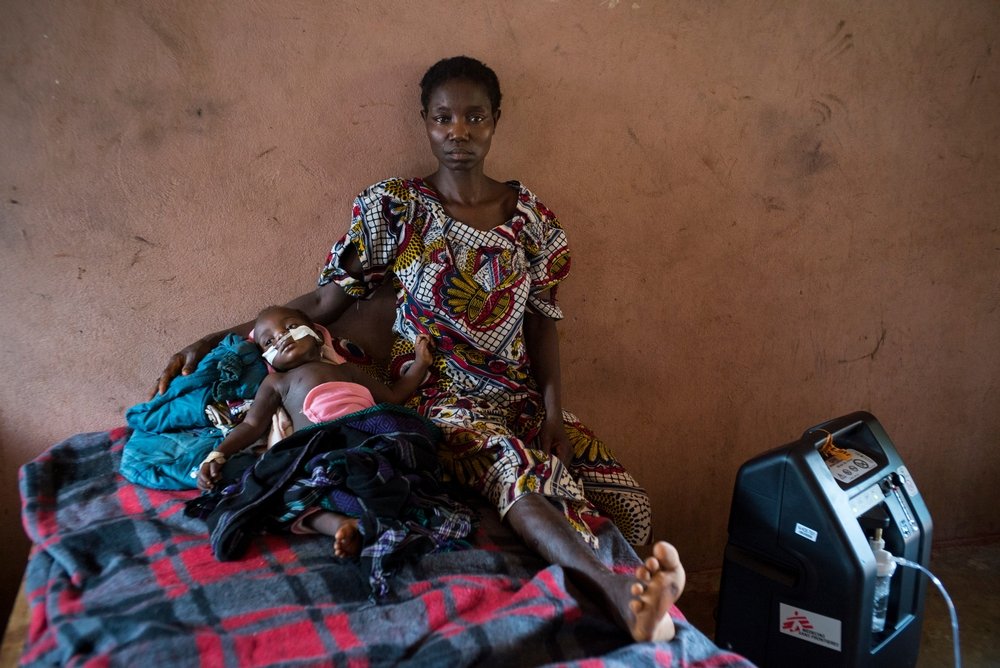 Diana Zeyneb Alhindawi
Motolo Kendombi is 9 months old and breathes through an oxygenator in the MSF wing of the hospital in Monga. He suffers from measles and pneumonia.

We looked at the figures and worked out that the cost of running one of these generators for a year in the Democratic Republic of the Congo was around 5,200 Euros. Obviously the cost of diesel will vary from country to country, but that amount is several times what it costs to buy the concentrator itself!
In some hospitals MSF staff also use high-pressure bottles of oxygen. These come with risks, as the canisters are prone to exploding if not stored and transported properly. The sheer volumes needed are a challenge to transport – especially when you are bringing all your supplies in by truck to a clinic in a remote location.
Another reason to see if solar power could be the answer!

We met with some of the companies who make this kind of equipment for hospitals. None of them had thoroughly considered the possibility of using solar power for their equipment.
Even worse, the costs of investing in such large-scale equipment at our hospitals was many times more expensive than using the portable generators MSF uses currently.
The extra cost is down to supply and demand: medical oxygen generator stations are specialist equipment produced in small batches for hospitals. It’s expensive. The portable concentrators MSF currently uses are mass produced for the large home care market, so they’re much cheaper.
The price and energy obstacles meant we needed to consider a new strategy: low-pressure storage technology.

Instead of using high levels of pressure to squeeze the oxygen into the storage bottles, a low pressure approach has a much bigger tank, and uses a system of pipes to deliver the oxygen to patients;
There are advantages and disadvantages;
Because the oxygen isn’t as compressed as in high pressure solutions, the gas has a much larger volume, which means a bulky storage system. You also have to assemble the system of pipes, which means it’s not as flexible as just bringing a concentrator to a patient’s bedside;
But, piped oxygen can be more comfortable for patients because they don’t have a noisy concentrator running constantly by the bed. It’s also better for infection control, since the concentrators would not be moved between and operated close to patients.
Although taking a low-pressure approach looked like it could be a possible answer, there was no product on the market that could do what we needed it to. We were going to need help.
Diamedica (UK) Limited, a medical equipment manufacturer specialising in product development for challenging environments, agreed to work with us to create a prototype. 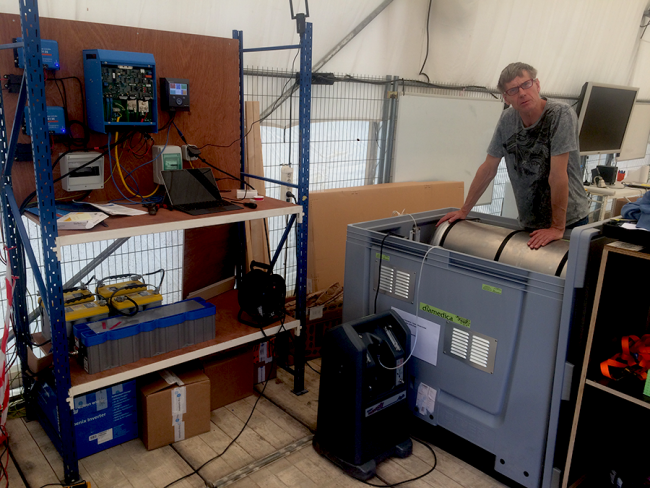 The prototype, ready for testing!

So, with our new plan in place, we could begin testing out the idea. For space and support, we headed to Brussels, to L’Espace Bruno Corbé (EBC).  The only potential problem was the slightly unpredictable Belgian sun...

L’espace or ‘the centre’, provides medical, technical and logistical support for MSF training and innovation activities. It's an off-grid compound in the middle of Brussels, without either mains electricity or running water, making it a very realistic testing ground. The primary purpose of it is for training - it’s designed to be as close to the field without being in the field.
Testing began with the solar power system. To run the oxygen generator, we would need the solar power system to maintain a steady output of 1.1 kW (AC at 220V) over as many hours as possible. 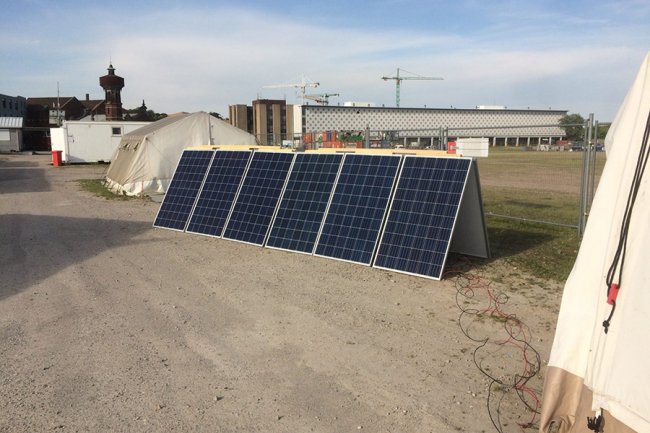 Our solar panels set up for testing in sunny Brussels.
The Belgian sun shone for us, but maintaining a steady output of electricity depends on a steady input of sunlight. Not so easy when you remember that the sun moves over the course of a day!
We found the least expensive and simplest option would be to install the panels and orient half directly to the east (to catch the sun in the first half of the day) and half to the west (to generate energy in the afternoon);
Could it work? Next we focused on the oxygen compression and storage. Would the low pressure system work with solar power?
To create the prototype used for the test, Diamedica adapted equipment originally designed as back-up oxygen supply to keep anaesthesia machines running in the case of power failures
The system consists of a standard oxygen concentrator, a small compressor and two separate storage vessels of 120 litres each.
After a series of tests and a lot of maths, we were sure: a solar powered oxygen concentration and storage system is feasible! 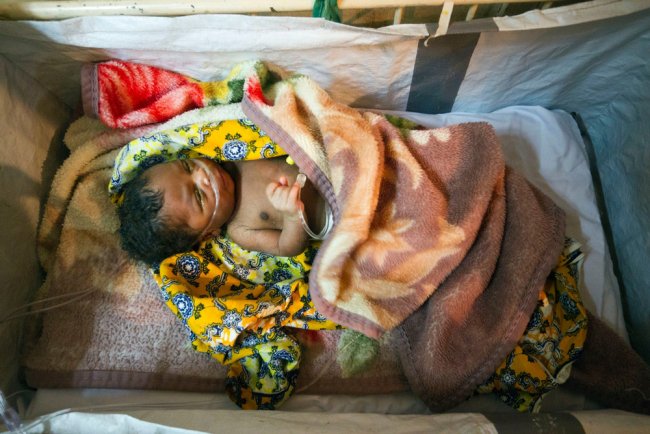 Solar-powered oxygen generation could help patients like this one in future.

There are lots of next steps, such as working out the piping necessary for distributing the oxygen from a low pressure system, and even comparing a this to a more economical high pressure system we’ve recently learned about. But we have definitely reached a milestone. The system worked.
MSF as an organisation tries to cultivate a culture of innovation. Ensuring patients will have life-saving medical grade oxygen there when they need it, even after MSF moves on, really underlines why this is so important.

more from our blogs