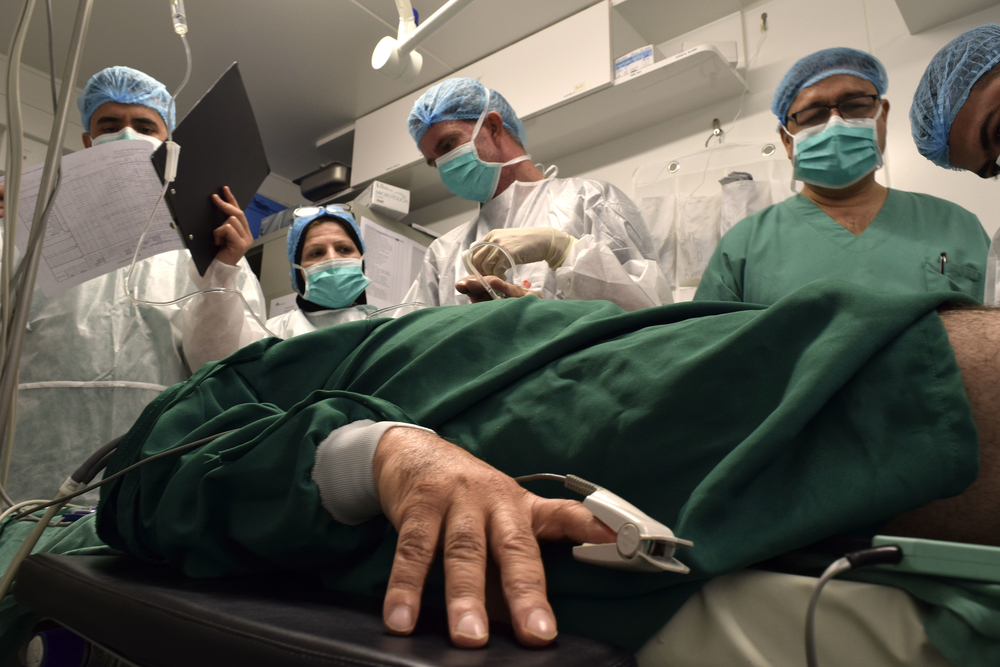 Saad sits in his bed and stares at the window, enjoying for a moment the pale light that filters through. He is alone in his isolation room, the doctors having just finished their daily medical consultation. They told him that he would be having surgery again soon – his fourth surgical intervention since the accident.

Saad*, aged 46, is from Mosul, Iraq; his family has lived there for generations. But the life he knew changed dramatically when a bomb went off in his neighbourhood, just as Saad was walking towards his car to go to work. “It was an incredibly hot, overcast morning, like lots of days,” he remembers. “But suddenly an explosion knocked me over and I fell unconscious.” The blast was not close enough to kill Saad, but his leg was badly injured, fracturing his tibia and fibula. Saad was taken to hospital for surgery. “The first surgery I had consisted of inserting an internal fixation into my leg to enable me to walk again,” he says. “But the recovery was excruciating and there were complications.”

When MSF opened a post-operative care facility in East Mosul in April 2018 for people injured by violent or accidental trauma, Saad was admitted there. A biopsy showed that his internal fixation needed to be removed and replaced by an external one, and that he had developed a multidrug-resistant infection.

Saad’s case is not an isolated one. Almost 40 percent of patients admitted to MSF’s post-operative care facility in East Mosul arrive with multidrug-resistant infections, and antibiotic resistance is a problem throughout the country. While the incidence of antibiotic resistance is particularly high in Iraq and across the Middle East, it also occurs in many other countries around the world where MSF works. Antibiotic resistance is not new, but it urgently needs to be addressed to prevent it becoming one of this century’s major public health challenges.

When a person has a bacterial infection, they are generally treated with antibiotics – the only available drugs that are effective against bacteria. But the bacteria can adapt to the drugs to ensure their survival. This ability to adapt and survive is called antibiotic resistance and can be caused by the overuse or misuse of antibiotics. In many low and middle-income countries, antibiotics are frequently available over-the-counter, rather than solely on prescription by a doctor, so their overuse and misuse is a common problem. In the long run, antibiotic resistance has a tremendous impact on people’s health. If antibiotics lose their effectiveness, essential medical procedures can become too risky to carry out. Antibiotic resistance also complicates the recovery of patients injured by violent or accidental trauma, such as the ones that MSF treats in East Mosul. 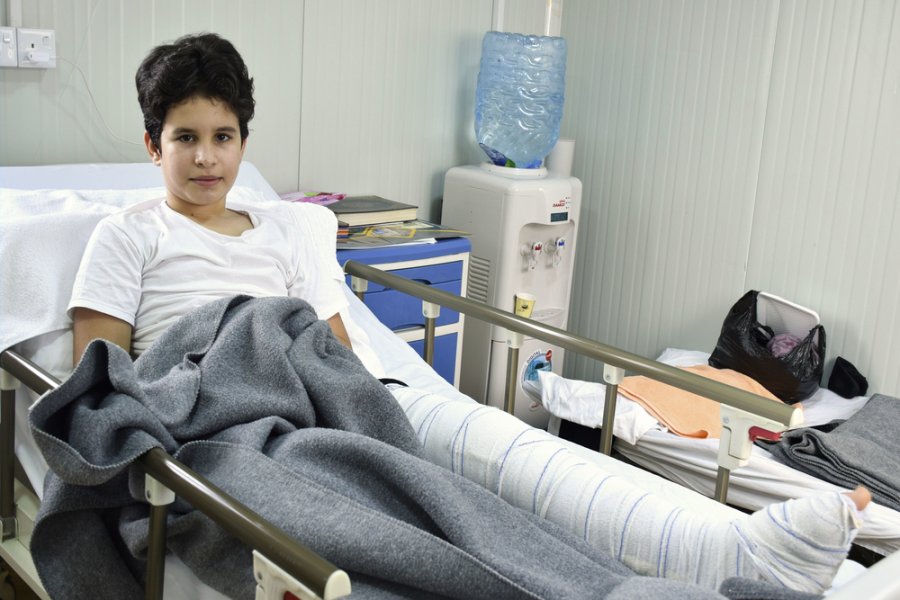 Candida Lobes/MSF
Ali Monir, 12, rests in his room, in MSF’s post-operative care facility. Ali has been hospitalised because of a leg fracture. Medical tests revealed that Ali presents a multidrug-resistant infection.

When its post-operative care facility opened last year, MSF put in place antibiotic stewardship and infection prevention and control (IPC) measures in order to limit the impact of drug-resistant infections. “It’s crucial to avoid the transmission of multidrug-resistant infections between patients in the facility,” says An Caluwaerts, MSF’s advisor on IPC. These measures can be as simple as making sure that people wash their hands properly. “Hand hygiene in healthcare facilities is one of the most important IPC measures to prevent this transmission,” says Caluwaerts. “Undertaken at the right time, hand hygiene can prevent the spread of resistant or sensitive organisms present in our environment and in our body.”

‘Contact precautions’ are also fundamental: patients with multidrug-resistant infections are given single rooms, rather than staying in open-plan wards, to avoid the spread of infection to other patients and medical staff. Contact precautions also include the use of personal protective equipment, such as gloves and gowns; limiting the transport and movement of patients; using dedicated patient-care equipment; and making sure that patients’ rooms are thoroughly cleaned and disinfected regularly.

The importance of mental health and health promotion services

Because of their physical isolation within the hospital, patients with drug-resistant infections are more likely to experience psychological difficulties related to what they have experienced and the challenges of their treatment. “People who are in ‘contact isolation’ experience higher levels of anxiety, depression and anger than other patients,” says Olivera Novakovic, a psychologist in MSF’s East Mosul project. “Many of our patients experienced traumatic events, and they have more time to think about it when they are in isolation rooms.”

MSF mental health staff are on hand to help them cope. “We’re developing individual psychological programmes according to the age and the level of education of our patients,” says Novakovic. “Psycho-education is a crucial phase, because if the patient understands why he’s in contact isolation and what drug resistance is, naturally he will become more compliant with the treatment.” 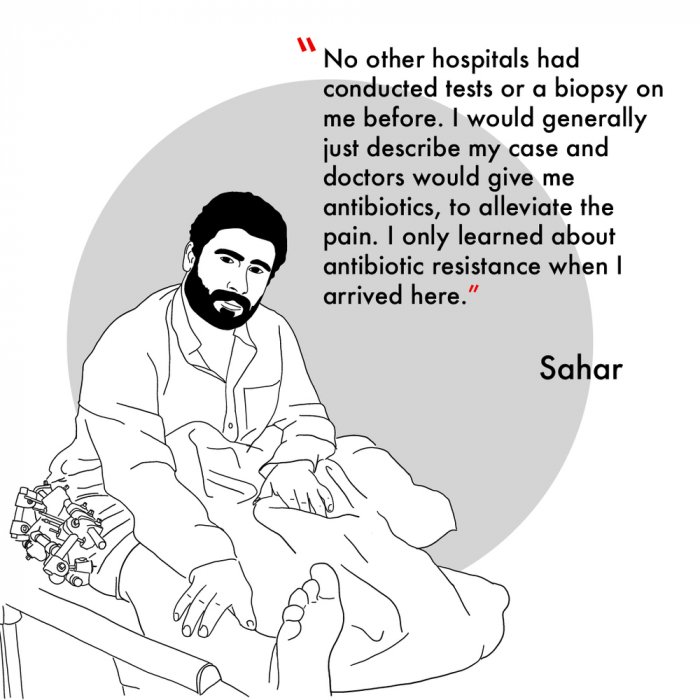 At the same time, MSF’s health promoters raise awareness about multidrug-resistant infections among patients and caretakers. “Antibiotic resistance represents a severe threat to public health and it shouldn’t be underestimated,” says health promoter Karam Yaseen, bringing to an end an awareness session in the hospital.

Data suggests that antibiotic resistance rates in Middle Eastern countries, including Iraq, are alarmingly high. MSF recommends that all medical and paramedical professionals avoid the unnecessary use of antibiotics. MSF also strongly recommends that the Iraqi Ministry of Health takes all necessary measures to make the population of Iraq aware of the severe impact on their health of the misuse or overuse of antibiotics.

*The name of the patient has been changed to protect his identity.