Iraq: Severe COVID-19 patients “were almost sure to die”

At the end of July 2020 in Baghdad, the capital of Iraq, something strange started happening. In hospitals across the city, the doctors and nurses sweating in the Iraqi summer heat noticed that while their COVID-19 intensive care units were ever full, the wards for people with less severe cases were emptying out.

“The hospitals had been over-capacity in Baghdad and people were scared, so they were resorting to home care,” explains Omar Ebeid, project coordinator in Baghdad for Médecins Sans Frontières (MSF).

People stopped going to hospitals. They came only when it was so late that they were almost sure to die. 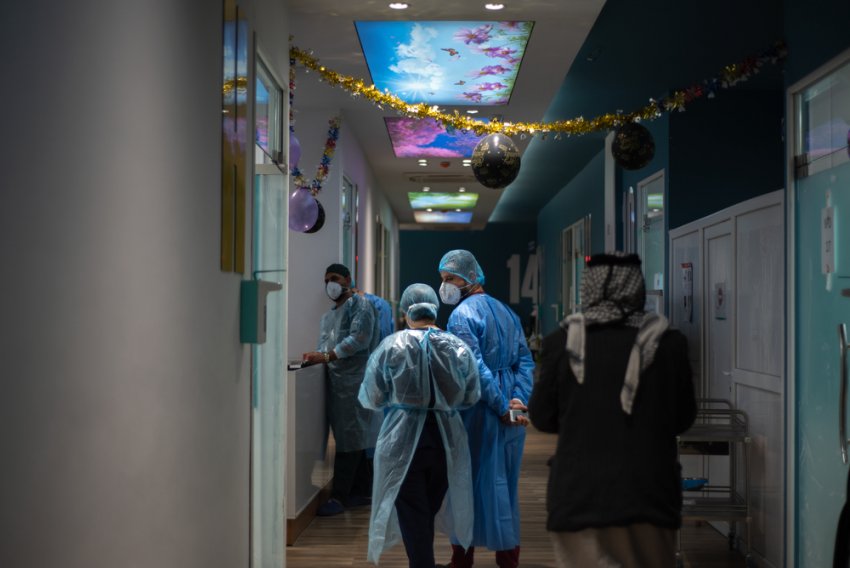 The hospitals in Baghdad are used to seeing sudden influxes of injured people, from the bombings that have followed the US invasion and the following long years of conflict. As COVID-19 began to spread through the city’s streets last summer, however, weaknesses in the overstretched health system quickly became apparent.

“We tried to get her a test, but we couldn’t,” says Hiba of her mother, Neamat, who fell sick in November. “We did a CT scan and saw that her lungs were all white, very damaged by the coronavirus.”

“As I’m a pharmacist, I thought that we could manage it at home,” Hiba continues. “The hospital was very last thing I thought of doing.”

Eventually, however, Neamat’s condition deteriorated badly and Hiba was forced to bring her mother to a public hospital. 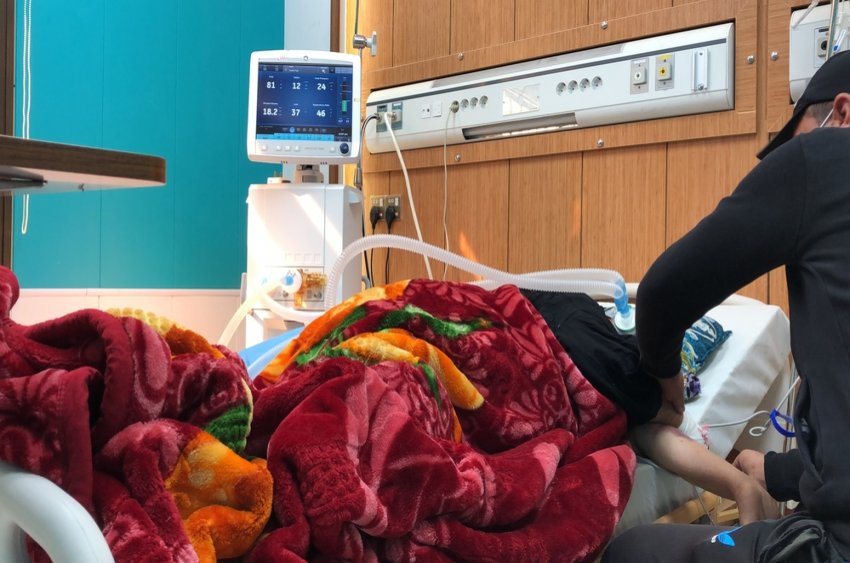 Hassan Kamal Al-Deen/MSF
A COVID-19 patient, who is under oxygen therapy, and her son at the MSF-run ward of the COVID-19 centre at Al-Kindi Hospital, Baghdad.

“There was a different doctor every day, and each doctor was writing a different prescription,” says Hiba. “There were only two or three nurses for about 20 patients, it was impossible for them.”

Medically, the situation here has been very difficult... As patients have been hesitant to come to hospital, they are arriving very late, with very low oxygen levels.

MSF teams were providing support in the respiratory care unit of Al-Kindi hospital throughout June, July and August. They saw first-hand the increasing needs and how the hospital was unable to cope with the flood of COVID-19 patients that needed close and consistent follow-up.

“It was understandable that we saw many staff scared of COVID-19 and hesitant to work,” says Gwenola Francois, MSF Head of Mission in Iraq.

MSF therefore agreed with the health authorities to add our own COVID-19 treatment ward inside Al-Kindi hospital, which opened in September with 24 beds, and later expanded to 36 beds in a purpose-built facility. 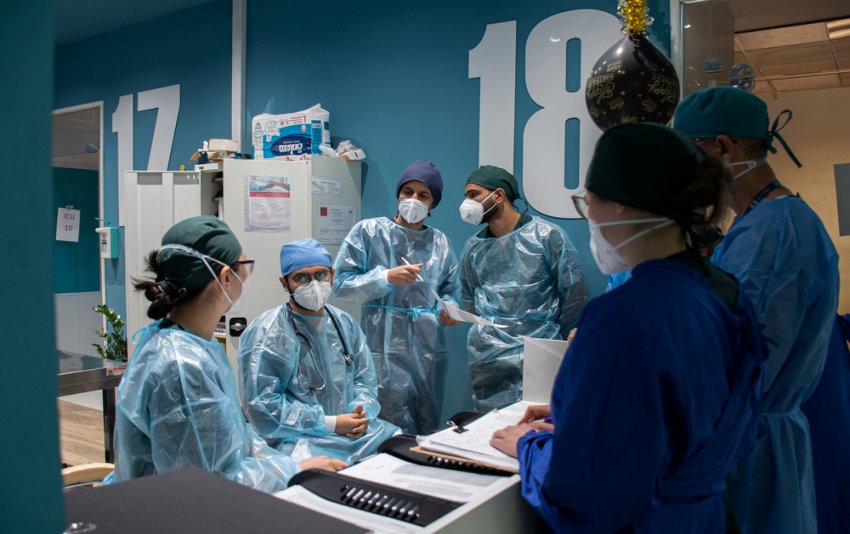 In the unit, doctors, nurses and other staff circulate in masks and blue gowns, taking vital signs, adjusting settings on ventilators, and explaining to family members what the situation of the sick person is and what treatments they are being given.

“We previously saw that sometimes caretakers could be violent towards healthcare workers when a family member died,” explains Ebeid, the project coordinator.

“We tried to avoid such violent reactions by increasing our communication with the families, and luckily we have not had any issues with violent caretakers on our ward.”

This level of communication is especially important in a unit that has treated many very sick people, with the death toll reflecting the seriousness of the cases received: there were 168 people admitted between September 2020 and February 7, and 86 of those died.

“Medically, the situation here has been very difficult,” says Dr Aurelie Godard, MSF’s intensive care adviser who worked in Al-Kindi in September and October. “As patients have been hesitant to come to hospital, they are arriving very late, with very low oxygen levels and lots of complications.”

“When we started, the mortality rate for critical patients was almost 100 per cent, and although we’ve brought it down, it’s still very high,” Dr Godard continues.

“But working with our Iraqi colleagues we quickly developed new ways of working together and started to be able to discharge some patients that previously would have died.” 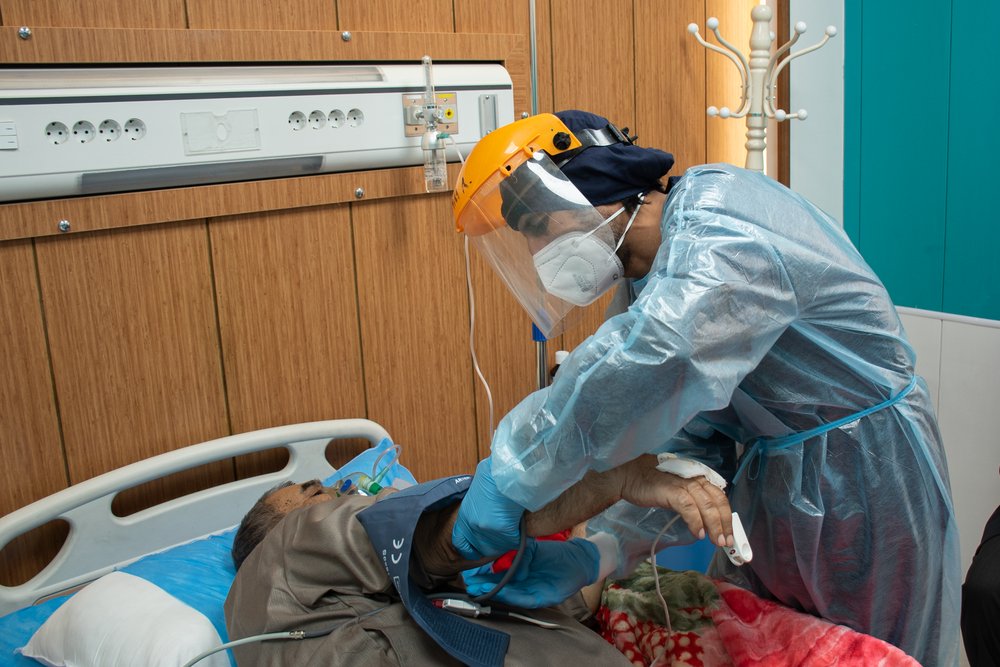 Hassan Kamal Al-Deen/MSF
MSF Nurse, Mahmood Mohammed, checking up on the condition of a COVID-19 patient who is admitted to the MSF-run ward of the Al-Shifaa 13 COVID-19 centre at Al-Kindi Hospital, Baghdad.

“In the first days of my work I was a little bit hesitant,” remembers Mahmoud Faraj, a nurse from near Mosul who is working with MSF in Baghdad.

“I was thinking about driving for five or six hours to work with people with the coronavirus, while other people were fleeing from this new dangerous disease.”

“But when I eventually worked with the patients and saw how people’s conditions change and how happy they become when they improve, I felt that I’m providing a great service,” says Faraj.

Keeping an eye on a worrying situation

There is a jarring contrast between the world inside the ward – where many sick people struggle to breathe or are unconscious with machines breathing for them – and the world outside where life seems to continue without much sign that COVID-19 has taken a painful toll on Iraq. 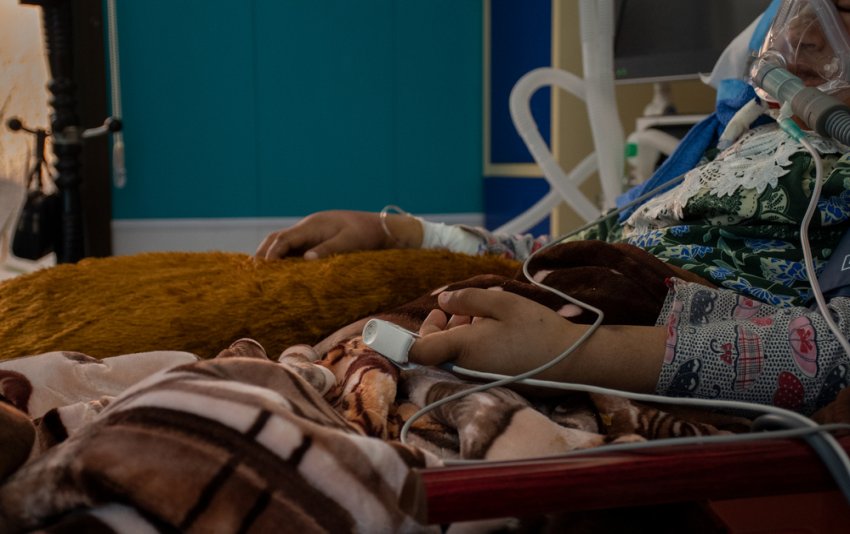 Hassan Kamal Al-Deen/MSF
Fatima, 19 years old, is receiving medical care at the intensive care unit of the MSF-run ward of Al-Shifaa 13 COVID-19 centre. Fatima developed bilateral kidney failure as a complication of COVID and has to undergo dialysis on regular basis.

Businesses remain open; with the country in the throes of an economic crisis, and no state support available, many Iraqis have had no choice but to keep on working as normal despite the pandemic.

Unfortunately, many people are also not wearing masks in public, although it is officially compulsory to do so.

“We are keeping a close eye on the situation because this increase is really concerning for us,” says Francois, the Head of Mission. “We are ready to keep supporting the Iraqi health authorities in case hospitals are overwhelmed again.” 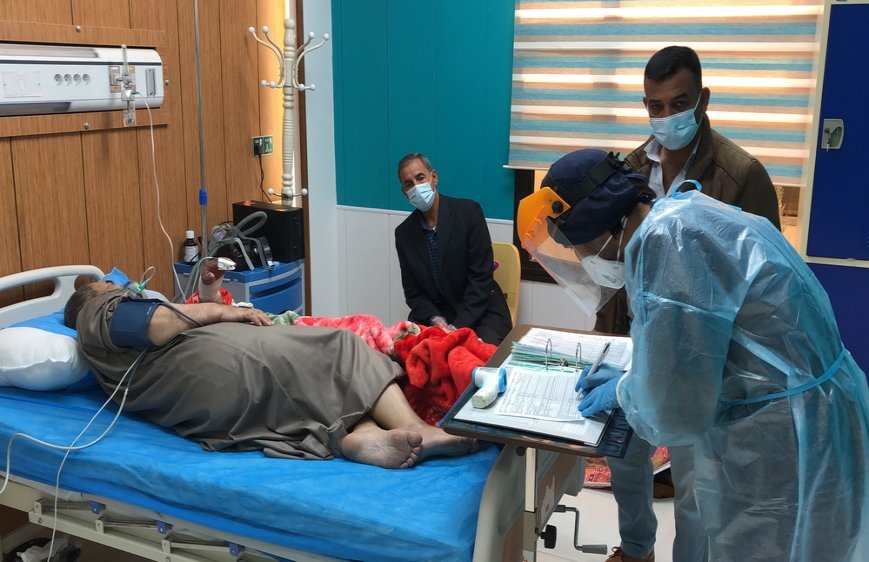 Hassan Kamal Al-Deen/MSF
An MSF Nurse, Mahmood Mohammed, checks up on the condition of a COVID-19 patient at the MSF-run ward of the COVID-19 centre at Al-Kindi Hospital, Baghdad.

Francois emphasises that mask wearing, hand washing and practising physical distancing all have a role to play in reducing the severity of a possible second wave.