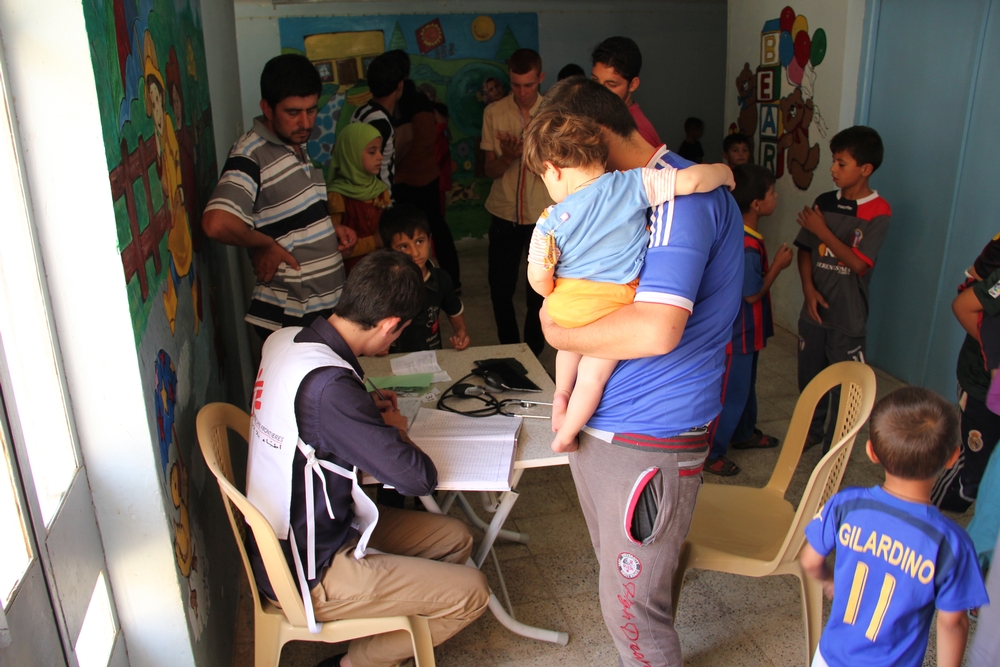 Iraq: 'Today the greatest medical needs remain in areas that are extremely difficult and dangerous to reach'

With the resurgence of violence in Iraq, hundreds of thousands of people have fled the major Iraqi cities of Mosul, Fallujah and Tikrit in the past month as a result of fighting between armed opposition groups and the Iraqi army. Jump to map

On 11 June, a team from the international medical organisation Médecins Sans Frontières/Doctors without Borders (MSF) withdrew from a clinic it was about to open in Tikrit as a result of the deteriorating security situation. Two days later, the clinic was damaged by aerial bombing.

In recent weeks, MSF has provided support to a number of hospitals in the cities of Tikrit, Hawija, and Heet in the form of staff, medicine and equipment. Emergency and surgical services are being maintained in these hospitals despite very difficult working conditions and without continuous support from the central health authorities.

“The level of dedication of the Iraqi health staff in these hospitals is really impressive,” says Fabio Forgione, MSF’s head of mission in Iraq.

“Doctors, nurses and support staff keep on working despite the extremely difficult conditions.  They have to deal with a lack of drugs and medical supplies, with shortages of water and electricity and with a high level of insecurity that makes moving around very difficult.”

Committed local medical teams are managing to provide basic services in a number of hospitals in areas affected by the violence. In the city of Heet, for example, emergency, orthopaedic and gynaecological surgery continue, while this week more Iraqi doctors and nurses started providing maternal healthcare and care for chronic diseases with remote support from MSF.

Some 82,000 displaced people have settled in Heet after fleeing fighting in Fallujah, among them a number of doctors.

At the same time, MSF teams are assessing and treating the health needs of displaced people living in camps, as well as the largely ‘invisible’ people trapped in areas where fighting continues, or camped out in unused buildings such as schools, churches and mosques.

MSF teams are also running mobile clinics in areas to the south of Kirkuk city, and in the region between Dohuk governorate and Erbil, where the majority of displaced people have gathered. Mobile teams are carrying out an average of 50 consultations per day at each location, mainly for communicable diseases in children, such as chickenpox and diarrhoea, and for chronic diseases in adults, such as hypertension and diabetes. They also provide care for pregnant women.

At present, the main challenge for MSF is the security situation in contested areas and areas under the control of armed groups.

“Providing the most basic assistance and medical care is extremely challenging for humanitarian organizations on the ground, given the security situation,” says Forgione.  “Today the greatest medical needs in Iraq remain in areas that are extremely difficult and dangerous to reach. The only certainties today are that people who are fleeing or are trapped by fighting find themselves in increasingly risky health situations, and that whatever aid we can provide remains insufficient.”

MSF has worked continuously in Iraq since 2006. In order to ensure its independence, MSF does not accept funding from any government, religious committee or international agency for its programs in Iraq, and relies solely on private donations from the general public around the world to carry out its work. In Iraq, MSF currently employs over 300 staff.