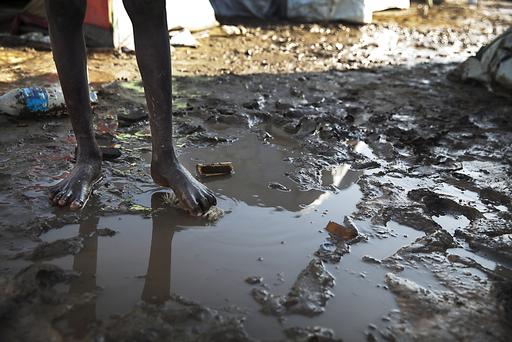 In a blistering criticism of the United Nations mission in South Sudan, Doctors Without Borders said that the mission is refusing to quickly move 21,000 displaced people from a UN base to safer grounds before the rainy season.

Doctors Without Borders said the decision by senior UN personnel is a "shocking display of indifference" to refugees who could be exposed to waterborne diseases and epidemics.
The aid group said it questions the UN's commitment to meeting the needs of South Sudan's most vulnerable people. It also criticised the unsanitary conditions at one of the UN camps.
Upcoming seasonal rains will endanger the refugees, and the group wants them moved to drier grounds, it said.
The UN spokeswoman in South Sudan, Arianne Quentier, said the UN is aware of the dangers at the camp and that people are being moved out. She said more than 1,500 people have already been transferred.
"We are very concerned that the combination of congestion and heavy rains is turning the site into a death trap prone to outbreaks of waterborne diseases like cholera," she said. "We are confident everyone will be moved by May when we close the Tomping site."
The Tomping camp, situated adjacent to Juba's international airport, has sheltered thousands of residents trying to escape massive violence that broke out in mid-December between supporters of the former vice president and the current government and military. Attacks were often ethnic in nature.
Inside the camp, a mini village has formed with a special roped-off "VIP" section for government officials and senior figures. With little to do to keep themselves occupied, small children splash around in drain water while families live in shacks and poorly constructed tents. The rains have made the site muddy and large pools of water have become breeding grounds for mosquitoes. Aid workers worry about cholera outbreaks.
Doctors Without Borders said that during recent rains 150 camp latrines collapsed and mixed with floodwater.
It noted that Hilde Johnson, the head of the UN mission, said earlier this month that Tomping is at "imminent risk of turning into a death trap".
But Doctors Without Borders said there is not enough time to move the remaining 20,000 people at the camp before the rains pick up. It said better space at Tomping should be used.
"They say there is not enough space at Tomping, but this is a sickening argument when on the other side of the barbed wire there are dry parking and storage spaces," said Carolina Lopez, the emergency co-ordinator for Doctors Without Borders.
Press Association
This content originally appeared in The Irish Independent