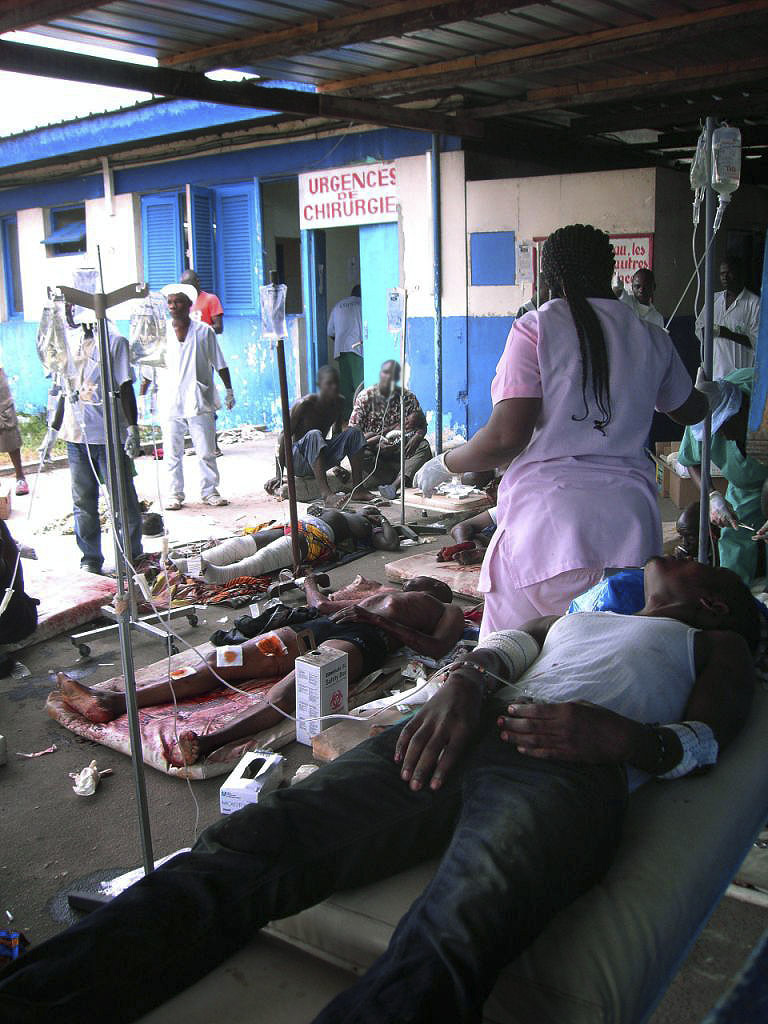 Ivory Coast is experiencing a new spiral of violence that is endangering populations’ access to medical care. Confrontations raging in parts of the capital city of Abidjan and in the western part of the country have displaced tens thousands of people. Facing the same insecurity as the rest of the population, health care workers are fleeing medical facilities in the conflict areas.  Shortages of medicines are only exacerbating the problem of reduced access to care.

In Abidjan, health authorities report that nearly all medical workers in six hospitals have fled as a result of the insecurity. Only one hospital in the Abobo neighborhood, Abobo Sud, is functional.  MSF has been working in the hospital since late February, handling medical and surgical emergencies in cooperation with the Ministry of Health. Medical teams there have treated 273 emergency patients over the past three weeks, 225 of whom had bullet wounds. Women and children have died of their injuries.

"We heard gunfire in Abobo every day," said Dr. Okanta Chibuzo, an MSF emergency doctor who recently returned from an assignment in Abidjan. "We admitted 10 to 15 wounded people every day."

On March 17, the Abobo market was attacked; wounded people filled the hospital. MSF teams working with Ministry of Health staff treated 66 people with bullet or shell wounds. None could be brought to the hospital by ambulance.

"Some of the wounded were brought in trucks that usually transport food,” said Dr. Chibuzo. “All of them were urgent cases."

The outburst of violence in Ivory Coast has led people to seek refuge in locations believed to be more secure. In Abidjan, residents have fled en masse to improvised reception sites, or have returned to their home villages. Tens of thousands of Ivoirians have sought refuge in neighboring Liberia, where MSF's mobile teams provide care. Population movements in the western part of Ivory Coast began in December.  While some people have returned to areas south of Danané, the front line is shifting further south and increased fighting in the Guiglo area has led to further displacements of people.

Paralysed
The population’s access to assistance in the western region is a serious challenge.

MSF teams are providing primary health care in many towns and villages on both sides of the front lines and are supporting several hospitals. However, the proximity to the fighting complicates the teams' ability to travel.

The country’s banking system and business networks are also paralysed. Coupled with transportation problems, this has led to serious disruptions in the distribution and supply of medicines in several regions of the country.

MSF is a medical humanitarian organization that observes strict neutrality and impartiality in its operations. Its activities in Ivory Coast are funded exclusively by private donors, ensuring its complete independence. MSF works in Abidjan, providing emergency medical assistance. In the western part of the country, it provides primary healthcare services and supports hospitals in Duékoué, Guiglo, and Bangolo. MSF also provides primary healthcare services in Nimba County, Liberia. MSF teams in Ivory Coast are comprised of 35 international staff and 135 Ivoirian staff. Five international staff and 25 Liberian staff work in MSF projects in Liberia.