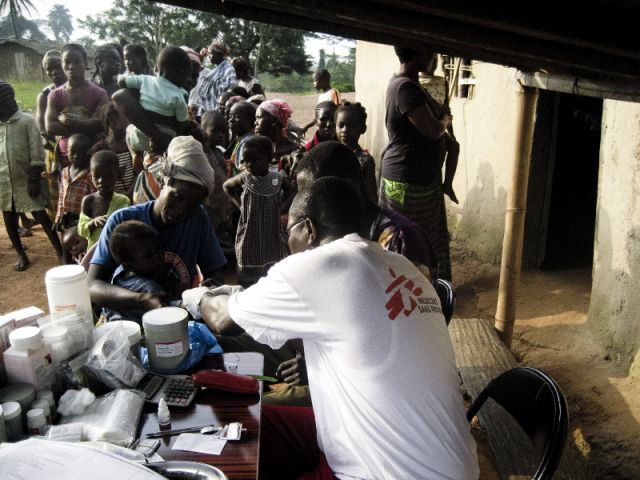 MSF expressed concern over the deteriorating situation in the west of Ivory Coast and the border region with Liberia. As the population flees violence, medical staff are deserting health posts. Faced with this increasing volatility, MSF medical teams are adapting their operations and the organization is asking all parties to the conflict to allow its medical teams to care for patients, regardless of their affiliations.

In the west of Ivory Coast, where local medical personnel have abandoned health centers, MSF has set up a mobile medical team to provide primary healthcare services in the north of the Duékoué district. However, on March 3, as residents of this area began to flee, MSF was forced to halt its activities due to security concerns. Displaced persons around the city of Toulepleu, located near the Liberian border and currently inaccessible, have also taken flight.

“It is critical for patients to have access to health facilities,” said Mego Terzian, MSF emergency coordinator. “MSF medical teams, who strictly adhere to the principles of impartiality and neutrality, must be able to care for patients, regardless of their affiliation.”

MSF has been present in the west of Ivory Coast since the end of December, providing medical care in the city of Guiglo and in a camp in Duékoué housing 12,000 displaced people. MSF has also been working for the last five weeks in Duékoué’s hospital, where it is caring for 63 wounded patients. Although the MSF surgical team withdrew after local personnel returned, MSF is continuing to provide consultations in the hospital.

Last week in the town of Danané, near the border with Liberia, MSF treated 10 wounded patients in the hospital, where MSF teams had already pre-positioned medical equipkent and supplies. However, because electricity is no longer available in the area, access to clean, safe water is problematic.

MSF has also witnessed a worrisome deterioration in the city of Abidjan, and is working to provide support for hospital facilities there.

Tens of thousands of refugees fleeing to Liberia

Across the border in Liberia, where more than 70,000 refugees have been registered in the district of Nimba, MSF teams have increased their assistance to the local and refugee populations.

MSF teams are providing support to the health centers and are also operating mobile clinics and a medical facility in the Bahn refugee camp. Roadways have been made nearly impassable by rainfall, so the movement of refugees toward the camp, which was designed to house 15,000 people, has been slowed.

“In Liberia, starting on February 24, we have witnessed the arrival of a second wave of refugees,” said Ritter. “People are afraid and do not speak of returning.  And they fear for those who have remained in Ivory Coast.  It is important to continue to provide assistance wherever the refugees are found, and wherever the local population has been made vulnerable by this massive influx of people.”

MSF opened its first project in Ivory Coast in 1991. Until 2007, MSF teams were working in MACA prison in Abidjan, in the hospital of Bouaké city, and in the western regions in the hospitals of Danané, Man, Bangolo, and Zouan Hounien. The teams conducted primary and secondary healthcare activities as well pediatric and obstetric care. During the crisis period, MSF also provided surgical treatment to wounded people, ran a nutrition project and an integrated HIV/AIDS and tuberculosis treatment program. MSF withdrew in September 2007, when the situation in the country had stabilized.
MSF has worked in Liberia since 1990. In June 2010, MSF transferred the last of its hospital-based health care projects to local authorities. MSF continues its work in the capital of Monrovia, supporting the Ministry of Health and Social Welfare with the medical needs of victims of sexual violence.