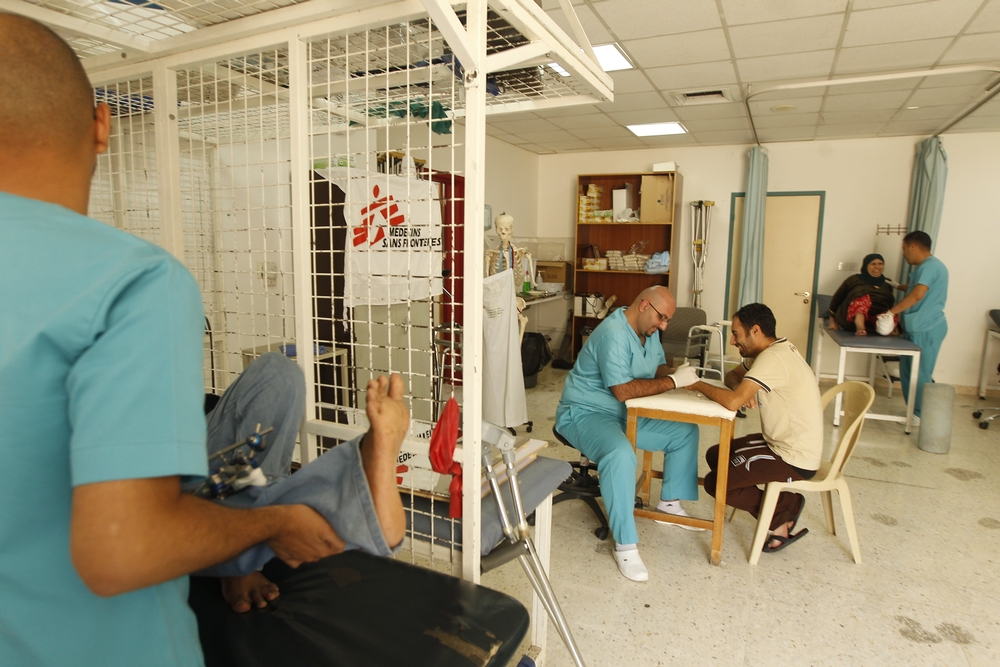 A newly upgraded reconstructive surgery hospital in Amman, Jordan, has been opened by Médecins Sans Frontières/Doctors Without Borders (MSF). The hospital serves war wounded patients from across the region who have no access to specialised surgical care.

The project was established in 2006 in response to the absence of such care for victims of the war in Iraq and has since expanded to receive patients from Iraq, Gaza, Yemen, and Syria.

Nine years later, MSF has enhanced the capacity of the project by moving to another hospital structure and renovating it to better cope with demand.

Ahmad Khalifa, a 15-year-old from Iraq

Ahmed was injured in October 2010 when an ambushed car exploded a few metres from his school building.

He doesn’t like to describe this moment and is trying to erase it from his memory. All he remembers is the noise of the ambulances arriving and fire all around him.

He arrived at the MSF surgery project in Amman in 2011 with severe burn injuries to his face, neck, arms and other parts of his body. He's had 22 surgeries since, with his next surgery due in September.

"This hospital has become a second home for me; I’ve made more friends here from the other patients than I have in Iraq. The new hospital is a convenient place and we get to watch football matches on TV. I support Real Madrid and I will always do so," said Ahmad.

The hospital provides a comprehensive care package for its patients, which includes physiotherapy and psychosocial support alongside surgical interventions.

Patients are also given accommodation, now available on site in the new location, and financial travel assistance to reach the hospital and return home after or in between treatments, if the care plan is staggered over time.

“In this new and expanded facility, our highly trained and specialised medical teams from the region are able to improve the quality of care provided to our patients.

"Our highest patient quota is currently from Syria, followed by Yemen and Iraq. The people of these countries have already witnessed and experienced so much suffering,” said Marc Schakal, MSF’s Head of Mission in Amman, Jordan.

Mustafa Abdullah, a four-year-old from Syria

Mustafa suffered severe injuries to his hip, leg and head in August 2014 when a barrel bomb fell on his family house.

Both his father and mother were killed as well as one of his sisters and a cousin. He crossed the border into Jordan from Syria with his grandmother after spending 17 days of treatment in a field hospital in the village.

Four months later, he was identified by an MSF doctor in Zaatari camp for Syrian refugees in Jordan and admitted to the Amman reconstructive surgery project. He had one orthopedic surgery in his leg and is currently undergoing physiotherapy until his next surgery is scheduled.

Since 2006, the hospital has admitted over 3,700 cases and conducted over 8,238 surgeries. Cases are identified by a network of Medical Liaison Officers in the patients’ countries of origin. Such numbers are just a drop in the ocean in the numbers of war victims suffering the consequences of regional turmoil.

"While they may receive initial care for their wounds, our patients do not usually have access to such specialised surgical procedures in their home countries, which are mostly at war.

"These hard to reach services include orthopaedic, maxillofacial and plastic reconstructive surgery, which we provide at no cost to the patients and lower running costs than the private sector," said Dr Ashraf Al Bostanji, Head Surgeon.

The hospital has also conducted over 134,620 physiotherapy procedures and 45,660 psychosocial sessions since it was first established.

Mustafa Irshaid, a 14-year-old from Syria

Mustafa was severely injured on the 29 September 2013 when a missile fell near the restaurant he was helping his father at after school.

One of his arms was amputated; he also had amputation from below the knee on one of his legs. He arrived in Amman hospital for the first time in 2014 and had bone graft surgeries alongside physiotherapy treatment to help him regain the strength and mobility needed to stand up again and leave his wheelchair behind. In a couple of weeks, he will receive prosthetic limbs.

"I like the new MSF hospital as it has more space and I can do more activities with other patients in-between surgeries." Mustafa said. "My father is with me in the hospital and he always tells me I have to be patient because one day I will finish my treatment.

"I used to play football with my friends in Syria in the afternoons and I hope after the completion of my treatment with MSF in Amman, I will be able to play football again. It doesn’t matter if I play with a normal leg or prosthetic leg as long as I can enjoy playing and can kick the ball again."

What makes this hospital stand out?

“The surgical techniques adopted in this project are world class. For instance, our team conducts microsurgeries, which involves three main types of surgeries: free flaps, nerve grafting and hand surgery. What makes this project stands out is implementing such a high level of technical expertise for war victims in the humanitarian medical field,” explains Dr Ashraf.

MSF has been present in Jordan since 2006. In 2013 it set up a mother and child health care project in Irbid, which also offers mental health support, and an emergency trauma project in Ramtha close to the Syrian border.

Find out more about our work in Jordan