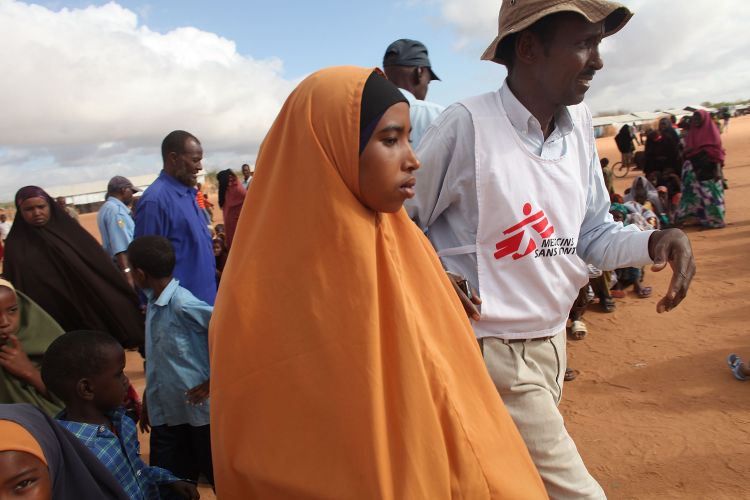 The 'Ifo Two' refugee camp lies empty whilst tens of thousands of Somali refugees live in unacceptable conditions less than 10 kilometres away. Despite a number of aid agencies, including MSF, being ready to assist the more than 400 refugees who arrive each day, negotiations for the opening of the new camp continue to be blocked.

Ifo Two, near Dadaab in eastern Kenya, was planned to house the constant influx of new arrivals fleeing war and drought in Somalia. Instead, two months after the refugees were due to be relocated (on 2 November 2010), the camp lies empty whilst thousands of refugees live in appalling conditions on the outskirts of the already congested Dagahaley camp.

In the first two weeks of January alone, almost 6,000 refugees made the perilous journey from Somalia to Dadaab. However, instead of finding the assistance and protection they need, refugees – caught in the middle of the negotiations about opening the camp – are being left to live in undignified and unacceptable conditions outside the camp.

“The minimum international humanitarian standards are not being met. The refugees have scarce access to water, food, non-food items and shelter. There are no latrines, making open defecation the only option, and increasing the risk of the spread of disease, particularly in this vulnerable population group that is already fleeing years of war,” says MSF Humanitarian Affairs Officer, Elena Estrada.

Last November, MSF warned that the situation of refugees in spontaneous settlements outside Dagahaley was deteriorating after their makeshift shelters and food supplies were destroyed following heavy rains. Since then, the health status of the refugees has got worse and their living conditions more squalid.

Insecurity is another problem faced by the refugees. The majority of the new arrivals are children, women and the elderly. Living outside the camps mean they have little or no protection and are vulnerable to further violence.

In Ifo Two, aid agencies are waiting to resettle the refugees in an area equipped with clean water, sanitation, schools and health services. An MSF medical team has been on standby since last October, ready to assist refugees in a temporary health facility whilst a 45-bed hospital is being built.

Established in early 1991, the Dadaab camps were intended to house 90,000 refugees. In 2008 the three camps were declared full and unable to host more refugees. Dadaab currently hosts over 308,000 refugees. After negotiations with the local community, elected leaders, provincial administration and member of parliament, in December 2009 the UNHCR was granted permission to extend Ifo camp, with the capacity to accommodate 80,000 refugees. In July 2010, MSF committed to providing healthcare services in Ifo Two. Despite MSF’s commitment towards the refugee population and its redeployment of resources, MSF has not been able to assist the refugees, as Ifo Two is still not operational.

MSF urgently calls on the responsible parties involved in the negotiations to allow for the immediate reallocation of the refugees from Dagahaley camp in Dadaab to Ifo Two extension camp.

MSF has been assisting Somalis since 1992. The medical humanitarian organisation started work in Dagahaley camp in March 2009, providing medical care, including surgery and maternal health services, in a 110-bed hospital. The four MSF health centres offer vaccinations, antenatal care and mental healthcare, with an average of 10,000 patient consultations every month.