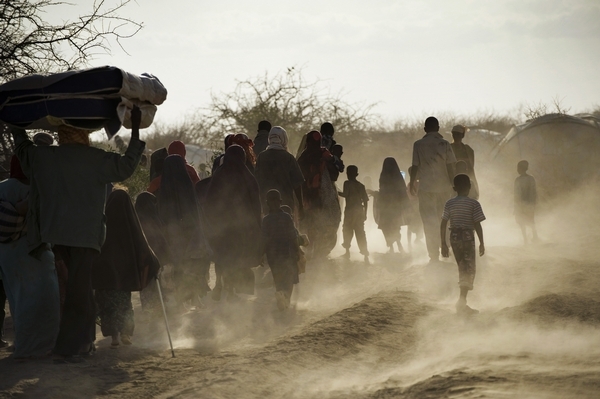 Kenya: Dadaab emergency only a matter of time

It is only a matter of time before the next emergency hits Dadaab refugee camp, says a briefing paper released today by Médecins Sans Frontières/Doctors Without Borders (MSF) ahead of World Refugee Day.  "Dadaab: Shadows of Lives" describes the plight of half a million refugees living in increasingly insecure conditions with nowhere else to go, and argues that there is an urgent need to explore alternatives.

On guard against emergency

“Today, even though people are fed, Dadaab is no longer a refuge,” says Dr Elena Velilla, MSF’s country representative in Kenya.

“It is clear that the current model of the camps is not working. How many more nutritional crises or measles epidemics will it take before we start looking for a solution?”

Refugees – most of them women, young children and the elderly – continue to arrive from Somalia. But Dadaab can no longer offer them safety. In and around Dadaab, the security situation is getting worse, affecting services and the provision of aid by MSF and other organisations.

After a number of serious incidents in October 2011, including the kidnapping of two MSF aid workers, humanitarian activities in the camps were scaled down and registration and medical screening of newly arrived refugees brought to a halt. In the eight months since then, new arrivals have had to find shelter with long-term refugees in the already overcrowded camps, and there have been outbreaks of measles and cholera.

Possible alternatives to Dadaab put forward by MSF include persuading the international community to allow more refugees to resettle abroad, relocating the refugees to a safer area in camps of a more manageable size, and developing opportunities for refugees to become more self-reliant.

“A refugee camp is not a long-term solution,” says Dr Velilla. “Thousands of vulnerable people have already suffered too much. In a safe haven, health and dignity should be guaranteed. As long as no action is taken, the Somali refugees will continue to pay the price.”

MSF runs a 300-bed hospital in Dagahaley, one of the five camps that make up Dadaab. There are currently more than 850 severely malnourished children enrolled in the nutrition programme. MSF staff carry out an average of 14,000 medical consultations each month and admit 1,000 refugees as inpatients. The hospital also provides maternity care, surgery and treatment for HIV/AIDS and tuberculosis.  MSF also runs four health posts in Dagahaley providing basic healthcare including antenatal care, vaccinations and mental healthcare.

In October 2011, two MSF aid workers, Montserrat Serra and Blanca Thiebaut, were abducted in Dadaab refugee camp while carrying out emergency assistance for the Somali population. They remain in captivity, and MSF, while continuing to respond to acute crises, has put on hold the opening of any non-emergency projects in Somalia until their release.