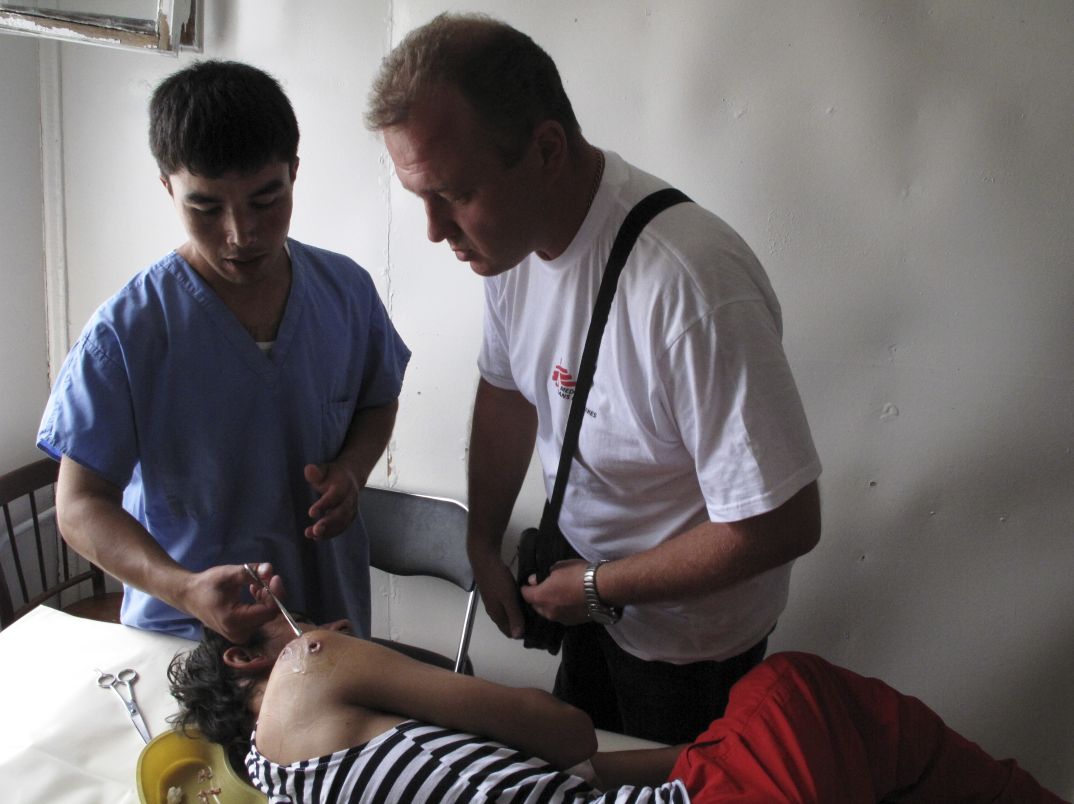 27 wounded, two dead, at a hospital in Osh on Monday 21st June

The situation is still very tense in Osh and Jalal-Abad, southern Kyrgyzstan, where violent clashes have killed hundreds since June 10th. MSF teams are on the ground providing medical care to the victims and displaced and giving support to the local health structures.

On Monday 21 June, an MSF medical team learned of a new violent episode in Nariman, in the outskirts of Osh, southern Kyrgyzstan. The team visited the hospital in Nariman where 25 wounded were receiving care and two were reported to have died.

“The patients were all men suffering from wounds such as head injuries, ribs fractures, and bruises,” says Andrei Slavuckij, MSF coordinator in Southern Kyrgyzstan. “Theses wounds were clearly related to violent beatings. This is just a new example that violence and tensions are far from over here.”

The hospital personnel were able to cope with the number of patients but the hospital lacked basic drugs and medical material, which MSF then donated.

MSF witnessed the presence of four unidentified armed persons in the premises of the hospital, a situation which may prevent other wounded people to seek medical care.

“If other people are wounded, they may be hiding somewhere and be too scared to come and get medical care at the hospital,” adds Slavuckij. “In addition, some ambulances cannot refer severe patients to more specialised medical structures because their drivers have received death threats in some places at checkpoints for doing so. It is essential that patients who need care have total, unhindered access to medical structures.”

On Tuesday 22nd June, an MSF team encountered a very difficult situation at a health facility in Onadir, an Uzbek community of 55,000 inhabitants located south of Osh. “The medical personnel are totally exhausted,” says Sonia Peyrassol, psychologist and project coordinator. “They have been treating patients night and day since the first day of the crisis. “Both the patients and the medical staff are in deep shock. When we asked them ‘how are you?’, they started crying and telling us terrible stories.”

On the same day, MSF provided post-operative care to 50 patients who had been wounded in the earlier days of the crisis. MSF is now supporting the clinic by setting up surgical capacity and reinforcing maternal and paediatric care as well as treatment for chronic diseases. A MSF surgeon, a medical doctor and a nurse will be permanently based in Onadir and work alongside the clinic’s staff. Psychological care will be at the core of MSF’s work.

More than ten days after inter-community clashes erupted in southern Kyrgyzstan, the situation is still very tense in and around the cities of Osh and Jalal-Abad. MSF has observed that some of the people who fled violence, some by crossing the border to Uzbekistan, have now started to return to their places of origin.

A lot of houses in Osh and its surroundings have been burnt, and many people are still very scared, hiding or barricaded in their neighbourhoods. Many rumours are circulating also which only serve to aggravate this fear.

Six MSF teams on the ground

MSF is now working in Osh and Jalal-Abad, as well as in four sites located close to the border with Uzbekistan, providing medical support to health structures and care to the many people who have been affected and displaced by violence.

MSF has organized six teams comprising doctors, surgeons, nurses, psychologists and logisticians. Four of the teams are focused on giving assistance to families displaced by the violence and who are living in dire conditions.

Besides medical care and psychological support, they have been distributing 1000 hygiene kits and other emergency relief goods for 5000 people.

Two other teams are based in health structures in the cities of Osh and Jalal-Abad, assisting the local health personnel and providing them with medical supplies – for instance, 2000 treatments for chronic diseases have been donated to the Onadir polyclinic. On Wednesday, June 23, MSF staff have given around 300 medical consultations a day, including care to many wounded people.

On the other side of the border in Uzbekistan, MSF has been training and supporting local psychologists in order to offer mental health support to refugees, concentrating on group counselling sessions and training to counsellors.

An assessment of water and sanitation needs is planned. MSF has been supporting the refugees with relief items, which had been donated into a central stock.

Since June 23rd, the situation is changing and the team has seen many refugees leaving. As a consequence, the mental health activities have been ordered to stop by the authorities. The team on the ground is continuing to monitor the situation and preparing to support other MSF teams on the Kirghiz side of the border.

MSF has worked in Kyrgyzstan since 2006 and in Uzbekistan since 1997 providing medical treatment to tuberculosis patients, including those suffering from the most resistant form of this disease.