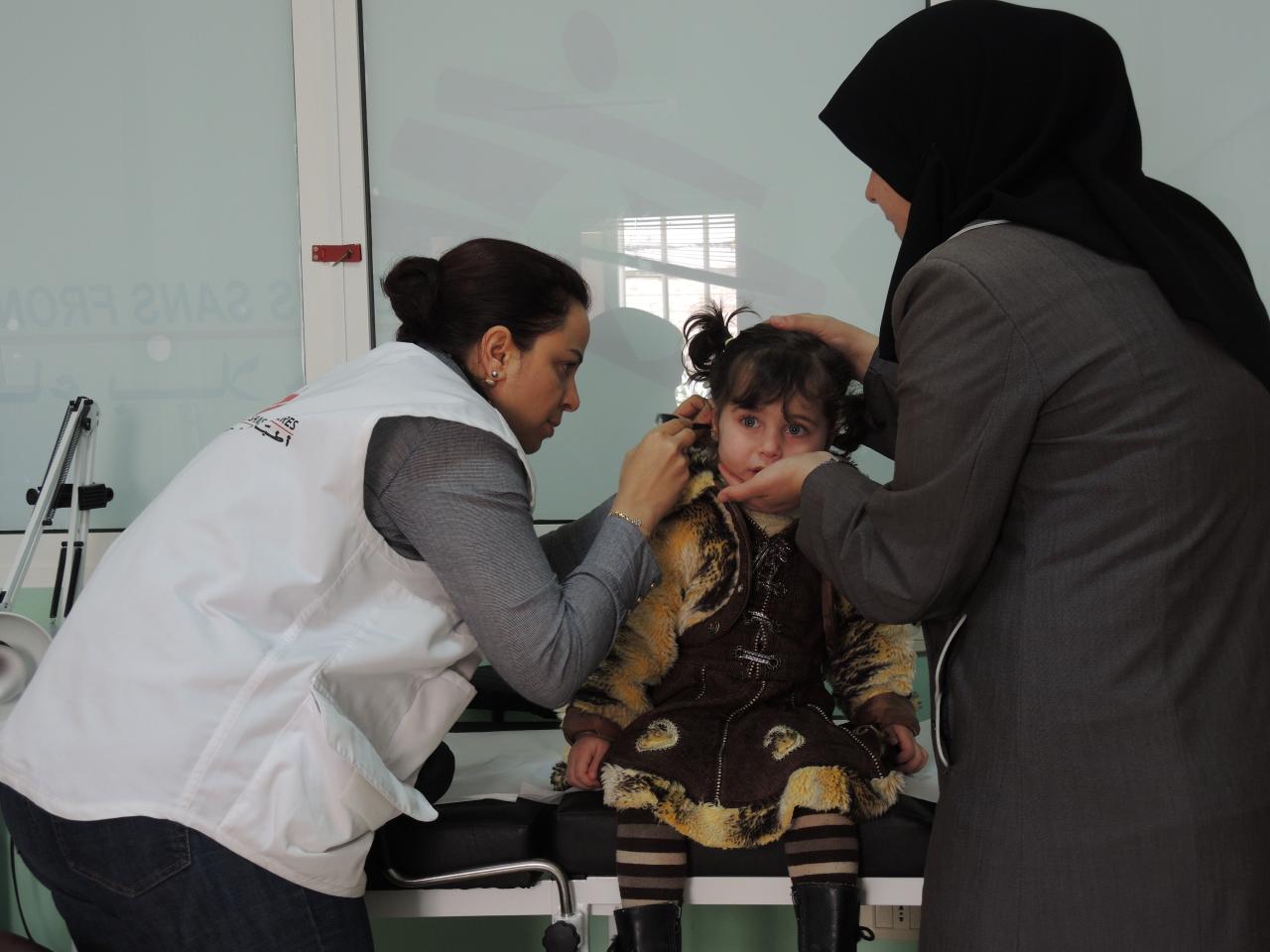 More than 10,600 Syrian families who have fled their country have taken refuge in Tripoli, Lebanon’s second-largest city, located approximately 30 kilometres from the Syrian border. Its population includes 500,000 Lebanese citizens, Palestinian refugees living in the Baddawi and Nahr el-Bared camps, and, now, more than 42,000 Syrians who have sought refuge in the city.

Lebanon 2013 © Aurelie Lachant//MSF
In the Dar-al-Zahraa clinic in Tripoli, Dr Maha Naja from MSF examines a Syrian little girl who came with her mother. Lebanon 2013 © Aurelie Lachant//MSF
The communal dynamics in Tripoli are complex. The majority of the population is Sunni, living alongside smaller Alawite and Christian communities. For several decades, a sectarian conflict has divided Sunnis and Alawites in the Bab al-Tabbaneh and Jabal Mohsen neighborhoods, exacerbated over the past two years by the war in Syria.

Since the Syrian crisis began, Tripoli’s government-run hospital has received a flood of wounded Syrian patients. “This hospital is key to providing emergency medical care for the Lebanese population and for Palestinian and Syrian refugees,” explains Dr. Rachid Khaldoun, a Médecins Sans Frontières/Doctors Without Borders (MSF) emergency physician. “The needs are huge.”

MSF has been supporting the hospital’s emergency department since May 2012, both with human resources and trainings of medical staff in emergencies management. MSF also provides medical equipment and supplies.

Today, the hospital’s emergency department serves an average of 1,730 patients per month. That number includes approximately 20 wounded Syrians and more than 340 refugees with medical and pediatric emergencies. The hospital is now the primary treatment point in all of northern Lebanon for Syrians requiring emergency treatment. Those wounded when fighting erupts in Jabal Mohsen and Bab el-Tabbaneh are transferred to the hospital. During the last flare up, between May 19 and 26, 102 wounded people were admitted.

“Tripoli faces not only a significant inflow of Syrian refugees who need emergency humanitarian aid, but also the worsening of the local conflict linked to the war in Syria, which has its own medical and humanitarian consequences,” says Ghassan Hanna, MSF’s deputy program coordinator in Tripoli.

Primary healthcare to respond to the growing medical needs

Jabal Mohsen and Bab al-Tabbaneh, among Tripoli’s poorest and most marginalized neighbourhoods, offer limited access to medical assistance. MSF is thus providing primary health care in two clinics in the neighbourhoods, in addition to technical support, medicine, and medical supplies.

In February 2012, MSF opened a clinic at the Dar al-Zahraa Hospital, in another area of Tripoli, to treat Syrian refugees and the most vulnerable among the Lebanese population. A doctor and two nurses provide free healthcare and treatment. The number of daily consultations can rise to 70, given the increasing flow of Syrians arriving in northern Lebanon.

Lebanon 2013 © Aurelie Lachant//MSF
Lebanon 2013 © Aurelie Lachant//MSF
“Most of the Syrian patients come for treatment of chronic or acute medical problems,” says Dr. Maha Naja of MSF. “It’s very difficult for refugees to pay for medicines, which are very costly. With the war, people must give short shrift to their health. Survival is what counts today, including access to water and food. We see many patients suffering from chronic diseases, whose health status worsened because they had to interrupt their treatment. ”

Other illnesses, such as dermatological ailments and nutritional deficiencies and disorders, are linked to poor living conditions—many families are crowded into very small spaces—and the economic shortfalls many refugees face, even when it comes to providing for their most basic needs.

“The refugees have significant medical and social welfare needs,” says Naja. “We see many cases of bed-wetting among children and other illnesses associated with patients’ psychological status. Families who have lost someone are traumatized psychologically, and this can have an impact on their illness. For a mother who’s lost a son, taking drugs to treat a chronic illness becomes a secondary concern.”

Some patients are referred to MSF’s mental health clinic at the governmental hospital in Tripoli. A psychiatrist and a psychotherapist provide consultations and medication, if necessary, to victims of the local conflict and to Syrian and Palestinian refugees. MSF social workers visit Lebanese homes and Syrian families who have taken refuge in basements, warehouses and garages and are living under harsh conditions.

“Most of our patients have symptoms of depression and anxiety,” says MSF psychotherapist Layal Rahhal. “The local conflict has imposed extreme pressure on the communities. People are afraid to leave their homes. Some even refuse to come here, even though we’re located just a few steps from where they live, because they’re afraid that they’ll be shot.”

The Lebanese, Syrian and Palestinian communities in Tripoli have significant mental health care needs, as reflected in the continuing increase in the number of patients and visits to the clinic. Most of the Syrian refugees are experiencing post-traumatic stress symptoms and personality and anxiety disorders associated with or worsened by the conflict. “We also treat people who were cared for in Syria but had to interrupt treatment when they fled and now can’t resume for financial reasons,” says Rahhal.

MSF has been working in Tripoli since 2012. The team includes 42 people, composed of 37 national staff and five international staff. By the end of April 2013, MSF had carried out 16,991 primary healthcare consultations, including treatment for chronic and acute diseases, vaccinations and perinatal care, and 1,582 mental health care consultations.