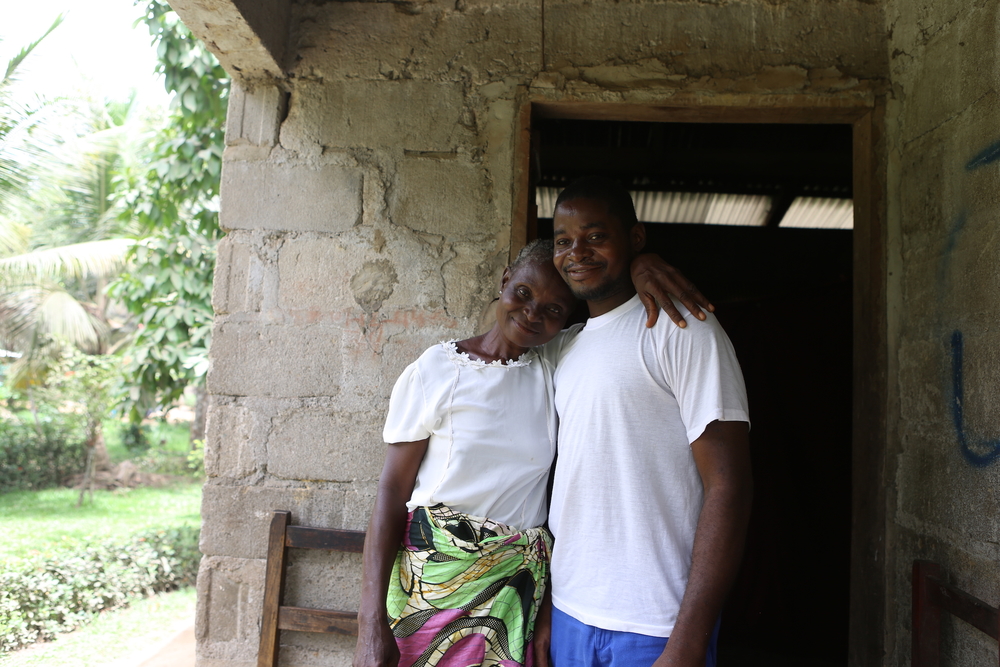 Timothy T.T.* is a 32-year-old man who lives with his mother, brother, and sisters in a community of neat cinder block homes just outside the hustle of urban Monrovia, Liberia’s capital. Each home is surrounded by palm trees, forest brush, and small lawns crossed with laundry lines. Domestic privacy is punctured by dirt trails that run right up to and past each home. Everybody knows everybody’s business. But sometimes that’s a good thing.

"When I came back he said, ‘I loosened the chain. You’re not supposed to tie me.’ I said ‘Well, I don’t want you to be going from here to there. That’s why I tie you. It’s not in my heart to tie you.’ For I’d seen Timothy moving shameful and disgraceful and sorrowful. So I bought another chain."

When Timothy’s mother, Susana Foley, talks about him, it’s with profound affection and tenderness. They’ve been through hell together. And because of her devotion, along with help from Doctors Without Borders / Médecins Sans Frontières (MSF) and the Liberian Ministry of Health, they’ve come out the other side.

“When Timothy was (growing) up, I didn’t see anything bad,” Susana says. “He was going to school... He used to play football. And through the football they gave him a scholarship.”

Timothy graduated from high school and got a job with a bottled water company. For several years he was doing quite well, living on his own, seeing his family frequently, and pursuing his interests in travel and study—he had applied for a visa to attend university overseas. When his schizophrenia surfaced, it was shocking, like he’d become an entirely different person overnight.

Susana vividly remembers the day in October 2014 when everything changed. They were getting ready to go to church and Timothy seemed stressed and disoriented. Then he picked up his Bible and ran out of the house as though someone were chasing him. Later that day in church, he asked his mother if she knew God, and then he held a chair up over his head and started speaking, she says, “like a monster.”

It wasn’t only in church that Timothy’s behavior sowed fear and disruption. Out in the community he acted aggressively, getting into fights and drinking too much. At home he terrorized his siblings. This was not the responsible, intelligent young man his family had known for nearly 30 years; he had become an irrational, dangerous person. Susana brought him to every church in their area. From her perspective, he must have been possessed by demons, but no preacher or healer was able to cure him. She was worried about his safety when he was out of her sight—if he angered the wrong person, he could get seriously hurt, or worse.

Finally, she did the last thing she wanted to do, but the only thing she knew would keep him safe.

“I went and bought a chain,” she said. “I put a chain on him.” It attached to his ankle he ran up and around a cinder block in the wall of his bedroom. He could move around the small room, which was right next to the common area of the house, and he could make a lot of noise, but he couldn’t attack his brother, couldn’t physically intimidate his mother, and he couldn’t leave.

Timothy managed to escape a couple of times. She says he found the key, he says he busted the chain. Either way, the chain was quickly replaced and the family struggled along.

Weedor G. Forkpa is a young woman who radiates competence. As a mental health clinician employed by the government at the primary care clinic in Bromley community, close to where Timothy lives, her desk holds stacks of neat folders and one purple pen that she clicks and holds poised in the air as she reviews Timothy’s file.

“We received a complaint last October through the community health workers who visited the community where Timothy lives,” she says, scanning the file. “We went to his house and we saw Timothy—he was in chains. And we met with the family.”

Weedor and her colleague assessed Timothy’s condition. “We told the family that there is treatment available that is free of charge and Timothy needs to start it right away.” 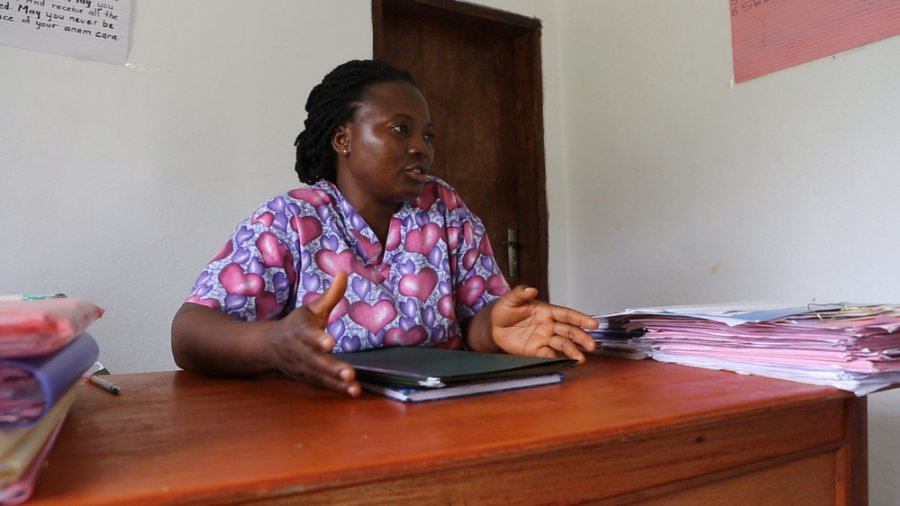 Just a year ago, before MSF started supporting Liberia’s mental health system, this medication, haloperidol, most likely would not have been available, and Weedor may not have even heard about Timothy’s case.

In just the last 30 years, Liberia has experienced two civil wars and a catastrophic Ebola outbreak. Like every aspect of life in the country, the health system was tremendously impacted by these cataclysmic events. Many medical professionals left—or, during the Ebola outbreak, perished—institutions have had scant resources, and many people’s health knowledge and health-seeking behavior is limited.

MSF played a critical role in fighting the Ebola outbreak that hit Guinea, Sierra Leone, and then Liberia hard from 2014 to 2016. The organization closed its last Ebola-related projects in Liberia—survivor clinics that offered care for people who continued to have physical and psychosocial issues after they recovered from the disease—in 2016.

When the mental health team began looking for services where they could refer their remaining patients, they learned that there was only one practicing psychiatrist and one psychiatric facility—which was providing only minimal care—in the entire country. This is what prompted MSF to conduct an assessment of the mental health needs in Liberia and ultimately partner with the Ministry of Health to improve and grow their services.

With only a bare bones national mental health system, it makes sense that many people in Liberia would not know about mental illness, or that it can be treated. Although Timothy’s case is an extreme example, he is not the only mentally ill person to be restrained by chains in Liberia. And the practice of chaining is certainly not unique to that country. MSF mental health experts say this happens nearly everywhere there is a lack of mental health resources. Around the world people are chained in homes, in yards, in religious and health institutions. The practice was not uncommon in US insane asylums before antipsychotic drugs were developed in the mid-20th century.

Though people in Susana’s position often have no better options, chaining is not a humane solution to mental illness—it imposes a loss of dignity and freedom, not to mention physical danger. So, when MSF teams learn of someone being held in chains, they work with the family or caregiver to provide treatment and get the patient safely out of those harsh restraints.

MSF teams have seen that investing in community-based care like the model introduced in Liberia can make a huge difference in the lives of people suffering from illnesses such as bipolar disorder, severe depression, post-traumatic stress disorder, and, as in Timothy’s case, schizophrenia.

“I’ve got a belief that this man is well”

MSF began working with the Ministry of Health in 2016 on an ambitious five-year plan to create and offer to the population mental health services that had never been offered before. The project aims to integrate mental health care into primary health facilities, with MSF providing three main pillars of support: access to medication, which has been an ongoing challenge in the country; provision of training to clinicians like Weedor by MSF-hired staff; and development of community outreach.

The community aspect of the plan is as crucial as the others. MSF-trained psychosocial staff work with government community health workers—they go into the areas around each of the four primary care clinics that also offer mental health services, and their job is threefold: They identify new patients and refer them to the nearest clinic; they follow up with patients; and they raise awareness and combat stigma around mental illness in schools, churches, and other public spaces.

Mietta Cooper is the community outreach worker who first discovered Timothy. When she visited his area, the community leaders told her that he displayed the kinds of behavior she described to them as mental illness, and that he was at home in chains. She asked if she could meet him, so they led her to Susana’s house and introduced her to the family. “We could not reach Timothy because he was violent at that time,” she says. “So we talked to his mother and we told her about the treatment. She told us Timothy cannot come to the hospital because he is violent. So we came back to the health center and we told the mental health clinician about him.”

Weedor and another clinician came to Timothy’s home and assessed his condition. The symptoms of psychosis were immediately clear, she says. Eventually, he would be diagnosed with schizophrenia, but on that day, Weedor initiated home treatment with Timothy and his family. At first, Susana was responsible for giving her son his pills. On the third day of treatment, he had his last violent outburst. “He picked up a chair, he wanted to hurt me,” Susana said. “I walked behind him, I grabbed him, and the other children came and took the chair from him. When they did that, he lay down. He never cussed; he never fought after that.”

After two weeks on medication, Timothy seemed stable. “Before treatment, Weedor says, “he was hearing voices and at times he would get angry; he wanted to fight. He would see things on the wall and would go on about hitting the wall. (The voices) were saying that (his family) wants to harm (him), saying his family doesn’t love him, they are jealous of him.” Now, he was no longer hearing the voices, she says. “And if he hears them, (he said) he will not obey.”

Six months after starting treatment, Timothy is responsible for his own medication and he comes to the clinic in Bromley every week for a check-up. He has a calm, agreeable demeanor and moves slowly. In addition to monitoring the clinical effects of the medication, Weedor engages Timothy in conversation. They discuss his actions and the harm versus benefit of the choices he makes.

Mietta continues to visit Timothy every week at home. “The first time I saw Timothy,” she says, “you couldn’t connect with him. But now you and Timothy can sit and talk. I’ve seen his condition change. He is getting better. He is improving.” 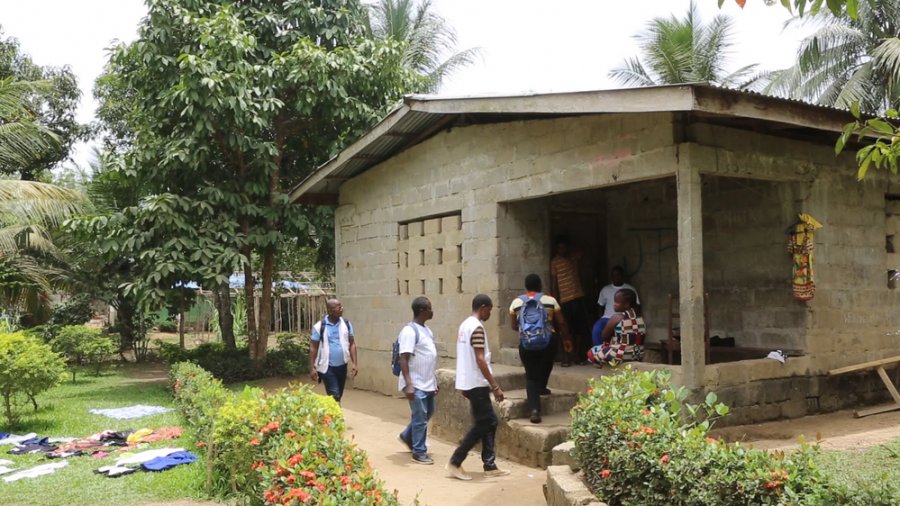 With the full spectrum of treatment and support, Timothy has made striking progress. “I’ve managed to change my behavior,” he says, “what I say and do around people. I’m able to be with people.”

Susana confirms the dramatic improvement in her son since he started receiving care. Since then, she says, “No harming, no cussing. So I say God bless you people. Because since you started the treatment, I’ve got a belief that this man is well.”

Timothy is also aware of the critical role his family has played in helping him through his illness. “My family went through life with me,” he says, “true life with me.”