February 14, 2022- Monrovia, Liberia- People with epilepsy face many challenges in low-resource countries such as Liberia, where the disease often remains undiagnosed, untreated and misunderstood. 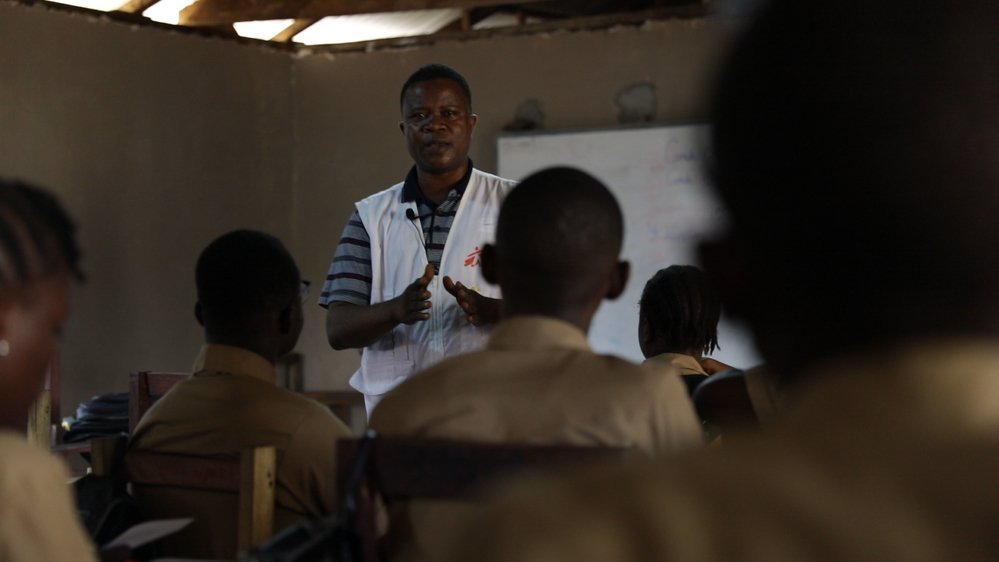 Epilepsy is a chronic disease of the brain characterized by recurrent seizures, which can vary from brief involuntary movements to severe convulsions.

Seizures can be debilitating and dangerous for the person experiencing them and troubling to those around them.

Without a medical diagnosis, families often turn to traditional or religious healers in search of a cure

Amuchin Nango was nine years old when he suffered a head injury in a bicycle accident and began experiencing seizures falling to the ground, jerking uncontrollably, even biting his tongue.

His family got so confused and did not know what to do,” explains Abraham Kollie, a psychosocial worker with Doctors Without Borders/Médecins Sans Frontères (MSF) in Liberia.

“At some point the family believed it was spiritual, like witchcraft."

"He was taken to so many traditional healers in Liberia and Sierra Leone, but the treatments could not yield any good response.”

“At some point the family believed it was spiritual, like witchcraft"

At school, Nango suffered repeated seizures, and some of his classmates made it clear they did not want him there, perhaps thinking it was a contagious disease.

“Even the principal had problems with it,” Nango recalls. “I told my mother, no need for me to attend there.”

It was only in January 2018 eight years after his symptoms startedt hat Nango found the help he needed.

Months earlier, MSF had begun providing epilepsy and mental health treatment in collaboration with local health facilities in Monrovia and other areas of Montserrado County.

Jean-Clement Ishimwe/MSF
As of early 2022, more than 1,200 patients with epilepsy are receiving treatment through an MSF-supported health facility in Montserrado County, Liberia. (February, 2022).

Nango’s family learned about these services at a community meeting organized by MSF.

Soon, he came with his family to Pipeline Health Center in Paynesville, where he was screened by a mental health clinician and eventually diagnosed with epilepsy.

Epilepsy is the world’s most common chronic neurological disorder, affecting an estimated 50 million people, according to the World Health Organization.

“Around 80 percent of people with epilepsy live in low- and middle-income countries, and almost three-quarters of them do not receive the treatment they need”

[LÉONARD NFOR][NEUROLOGIST WHO RECENTLY COMPLETED AN MSF ASSIGNMENT IN LIBERIA]

It may have a variety of causes, including complications during childbirth or infections that affect the brain, and sometimes the cause cannot be determined.

“Around 80 percent of people with epilepsy live in low- and middle-income countries, and almost three-quarters of them do not receive the treatment they need,” explains Léonard Nfor, a neurologist who recently completed an MSF assignment in Liberia.

“In Africa the prevalence of this disease is very high and qualified personnel are lacking. We must therefore find a system where epilepsy can be treated despite the absence of specialists in the disease.”

In Liberia, MSF partnered with the Ministry of Health in Montserrado County to train and supervise mental health clinicians at five health centers. The clinicians diagnose and treat epilepsy and psychiatric disorders with guidance from specialized MSF staff such as Nfor.

Medications play a key role in controlling symptoms such as epileptic seizures, while counseling also helps patients understand how to manage their condition.

Psychosocial workers and community health volunteers spread the word that treatment is available, and they work with families and communities to reduce the social stigma that many patients experience.

Nango’s experience of dropping out of school is far from unique. More than half of MSF’s epilepsy patients are school-age children, yet a majority are not attending school.

Jean-Clement Ishimwe/MSF
Amuchin experienced epileptic seizures since childhood and faced social stigma as a result, which led him to drop out of school. (February, 2022).

Social stigma is the primary reason why about 10 percent of these children dropped out, MSF has found, while other reasons include financial hardships or poor health.

After Nango was on treatment for epilepsy, it still took a concerted effort to enable him to return to school.

“Our psychosocial team continues to work with Mr. Nango and his family through home visits, phone calls, and the provision of psychoeducation at his school”

“Our psychosocial team continues to work with Mr. Nango and his family through home visits, phone calls, and the provision of psychoeducation at his school,” Kollie says.

“After an intensive awareness raising on epilepsy with students and administrative staff, Mr. Nango was finally accepted back in school.”

Two years ago, Nango graduated from high school, and he is now proudly working as a junior high school teacher. He spreads the word that epilepsy treatment is available and has encouraged other people with seizures to seek care.

Jean-Clement Ishimwe/MSF
With treatment and psychosocial support from MSF, he was able to return to high school and graduate. He is now a junior high school teacher. (February, 2022).

His own symptoms are well controlled by medication.

This International Epilepsy Day, February 14, 2022, MSF psychosocial workers are visiting health centers and schools in Montserrado County to further raise awareness. Their T-shirts carry a clear message meant to reduce the stigma that Nango and many other patients have experienced. They say: “Epilepsy is not contagious.”