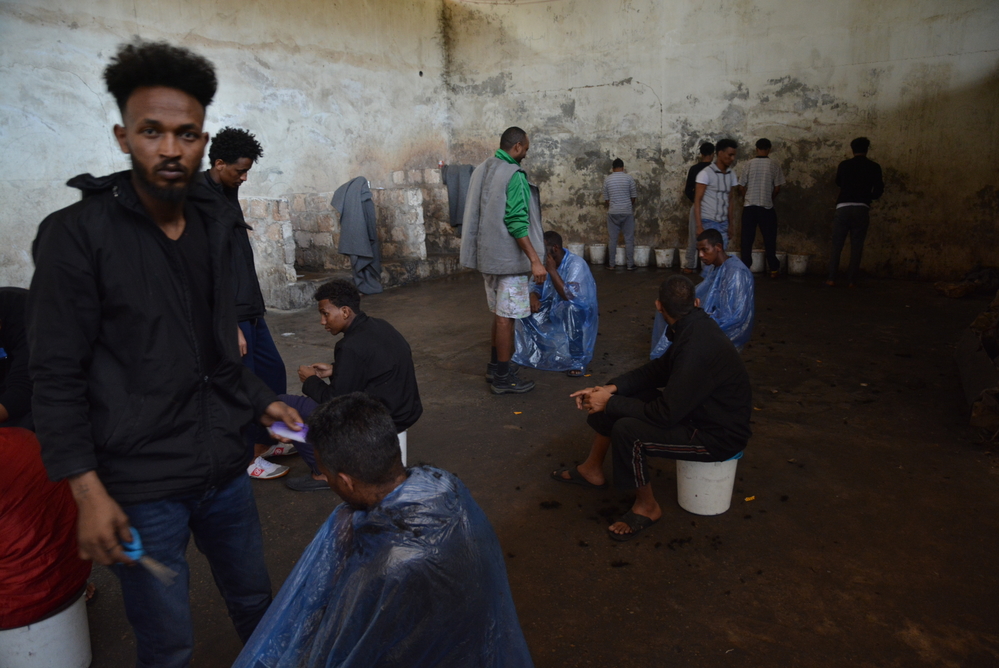 Libya: The closure of Misrata detention centre exposes migrants and refugees to even worse conditions

The transfer of more than one hundred detained migrants and refugees between detention facilities in Libya only exposes people to further inhumane and dangerous conditions, warns MSF.

On 14 October, Libyan authorities closed the Karareem detention centre in Misrata, in the central coastal region of Libya, and transferred more than a hundred refugees and migrants arbitrarily detained in this facility, to two other detention centres in the same region, Zliten and Souq Al Khamees.

"Closing one detention centre would be a positive step if refugees and migrants were provided freedom of movement, protection and assistance. But here, they are moved from one detention centre to another, seeing their conditions go from bad to worse and stuck in an endless cycle of despair and violence."

The conditions of detention in these two centres are known by Libyan authorities and UNHCR to be extremely bad, as reported by MSF teams on several occasions.

Men, women and children arbitrarily detained for months and in many cases years, with little access to food, water and open air, will be exposed to the same inhumane conditions. Some of them suffered torture and trafficking during their stay in the country.

From bad to worse

“Closing one detention centre would be a positive step if refugees and migrants were provided freedom of movement, protection and assistance."

"But here, they are moved from one detention centre to another, seeing their conditions go from bad to worse and stuck in an endless cycle of despair and violence. At the bare minimum, they should have been released and taken care of in a safer environment,” says Sacha Petiot, MSF head of mission in Libya.

"Alternatives to detention must be urgently developed, such as setting up shelters to provide immediate, temporary protection in Libya."

The armed conflict that started in April around Tripoli has made the situation more dangerous for the refugees and migrants detained in the areas where clashes occur. In this grim context, the tragic death of an estimated 60 people during an airstrike on Tajoura detention centre late at night on 2 July prompted renewed calls for the closure of Libya’s detention centres, including by Libyan authorities themselves.

There are currently no safe locations in Libya where refugees and migrants can find protection and assistance.

The only UNHCR-managed facility, the Gathering and Departure Facility (GDF) in Tripoli, is now saturated and UNHCR has claimed that it cannot accommodate more vulnerable people.

“We need more life-saving evacuations outside Libya. And it is urgent to develop an alternative to detention, such as setting up shelters to provide immediate, temporary protection in Libya. Otherwise, the most vulnerable refugees and migrants are condemned to endless detention and exposed to major threats and suffering” says Petiot.

MSF has worked in Libyan detention centres since 2016, providing general and psychological health care services and emergency referrals to hospitals, to alleviate the suffering of refugees, asylum seekers and migrants arbitrarily detained, and to expose the inhumane conditions of detention. MSF reiterates its call to release them, to scale up evacuations outside Libya, and put an end to the EU policy of intercepting and forcibly returning to Libya people who try to escape by sea.

In addition to its programs in Libya, MSF also operates in the Central Mediterranean Sea in partnership with SOS Méditerranée, on board the search and rescue vessel Ocean Viking, as refugees and migrants continue to risk their lives in order to flee the horrific treatment they face in Libya, and effective and dedicated search and rescue capacities are still critically missing.