Libya: MSF statement on forced disembarkation of people in Misrata

On November 20, 2018, Libyan security forces conducted an operation to forcibly disembark 81 refugees and migrants remaining on the Panamean-flagged cargo ship Nivin, docked in the commercial port of Misrata, while an MSF team was prevented from accessing the area. Among the group forcibly disembarked, there were over 20 minors, people who reported having been victims of trafficking and torture, and others declaring to be registered with the UNHCR.

Since then, we have not had access to any members of the group previously onboard the Nivin. We are not authorized to see patients we had previously been able to treat and follow up for 10 days and we are extremely concerned by the lack of official information regarding their current location and medical status.

The initial group of 97 persons onboard the Nivin should not have been returned to Misrata but brought to a port of safety in accordance with international and maritime laws. Based on UNHCR official positioning, Libya cannot be considered as such. 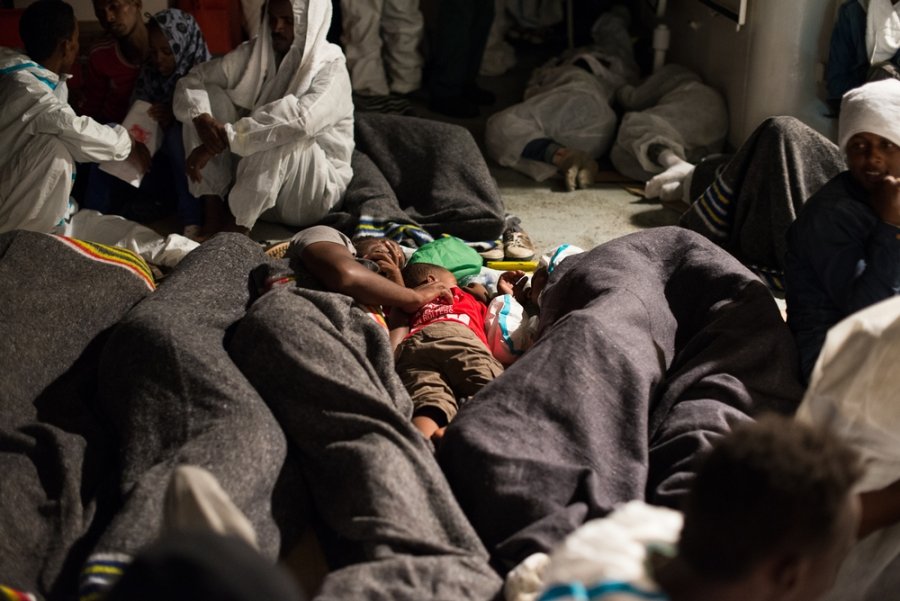 Fabian Mondl/SOS MEDITERRANEE
Refugees rescued from the sea sleep on the deck of the MSF search and rescue vessel Aquarius. File image from 2016.

Between November 11 and 18, prior to the forcible disembarkment, MSF medical staff carried out over 90 medical consultations onboard the Nivin. On November 14, 14 vulnerable people left the Nivin and were transferred to official detention centre. The rest of the group continued to refuse to disembark in Libya for fears of having to face arbitrary detention and other dangers they have experienced first-hand during their stay in the country.

We are appalled to see that during 10 days, despite our repeated calls to avoid a violent outcome, no compromise was reached to implement an alternative to detention. What happened instead has once again demonstrated the failure to provide much needed protection for people seeking safety.

The reality today is that people being intercepted at sea and brought back to Libyan shores in violation of international law and maritime conventions are left with no other option than indefinite arbitrary detention. This tragic situation is the result of deliberate and concerted efforts by Europe to prevent refugees, migrants, asylum-seekers from reaching its doorsteps at any cost. Most recently, Italy went a step further in branding people who flee for their lives and those who assist them as criminals by requesting the seizure of the MSF and SOS Mediterranee-operated rescue boat Aquarius for alleged anomalies in its disposal of on-board waste. This follows two years of smear campaign, judicial investigations, and bureaucratic obstacles against our humanitarian work.

more on our work in libya >