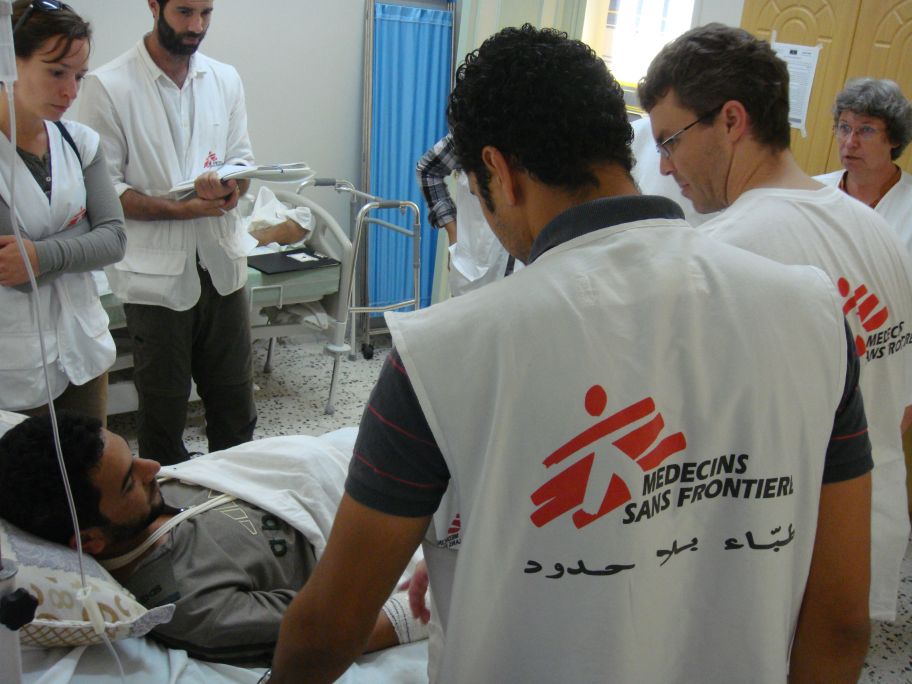 Libya: "in Sirte there are probably 10,000 people still trapped by fighting"

In this interview conducted on 13th October 2011, Dr Gabriele Rossi, MSF emergency coordinator, describes a very serious situation in Sirte. On the night following the interview, six patients died at Ibn Sina hospital because they could not be operated on. In the north part of town, thousands of civilians remain completely trapped by the fighting.

“We are in Ibn Sina hospital right now, which is the main hospital in Sirte. We have been here for three days. Today we have been hearing more firing and shooting than yesterday – there is lots of noise, and the constant sound of heavy artillery. The fighting is going on in the north of the city, and from here we can see a lot of fighters heading towards the frontline, with ammunition, with armoured pick-ups and even tanks.

All the houses destroyed and empty

In the areas of Sirte we have travelled through, there are no civilians at all: all the houses are destroyed and empty. Before the conflict, there were 100,000 people in Sirte, but in the past three or four weeks, 75 to 80 percent of the people have fled, most of them towards Misrata. The estimated 10,000 people who are still here are in the north part of town and are completely trapped by the fighting. There is no water or electricity.

In the hospital we have electricity, thanks to a generator, but until today there was no water. The atmosphere in the hospital is extremely heavy. There are about 50 patients, all with trauma wounds, fractures or burns, and all in need of surgery. Most of the patients are young adults, but we also have some women and children who have been injured in the fighting.

In the past few days, the patients haven’t been able to receive proper medical care, due to a shortage of doctors and due to the lack of water. Without water it’s impossible to do any kind of surgical intervention. The wounds of some patients are really bad and very infected. They need urgent surgical debridement. The situation is very serious.

MSF has brought in 50,000 litres of water and more water was brought in by other actors. So we now have water running in the hospital.

Safety in the hospital

Ibn Sina hospital is in a very damaged state, with signs of the heavy fighting. All the patients are on the ground floor, while the first floor and the basement are taken up with about 50 people who are sheltering from the violence and waiting for the chance to leave.

Security-wise, the hospital is not safe. Yesterday and today, there have been a lot of fighters entering the hospital with guns, checking every patient and looking for we don’t know who. It is very important that hospitals, medical staff and ambulances are allowed to provide aid unhindered and in safety. For our team it’s not safe to stay here at night for the moment, so each evening we make the two-hour journey back to our base in Misrata.

The hospital’s medical staff have been amazing – I would say they have been truly heroic. In the past weeks there were about five Libyan doctors working here, and 25 to 30 nurses, many from India and Bangladesh. The staff have worked through the intense crisis of the past few weeks and been directly exposed to violence. They have worked under shelling, under bombing, and under the threats of Gaddafi loyalists ordering them to come and treat their soldiers. Now they are exhausted and need all the support they can get.

Fortunately the staff situation is better now, as the hospital has just received eight medical doctors from Tripoli – including surgeons and anaesthetists – and four more nurses. So now the situation is returning to normality. MSF’s team is made up of three medical doctors, two nurses and a psychologist, and we have just been joined by two more nurses and two psychologists.

The mental health needs are enormous. At least 15 of the 50 patients, all of whom have trauma-related injuries, are also in huge psychological need, suffering from post-traumatic stress disorder. They suffer from nightmares, flashbacks, and depression. Some can’t even speak, but just cry, and one patient is suicidal.  All of the patients, particularly the mothers and the children, are in enormous need of support – they’re trying to bear the weight of what’s happened to them.

When we first arrived there was a lack of medicines. The first delivery we did was of painkillers, antibiotics for all the wound infections, plus drugs for chronic diseases. The pharmacy is chaotic, but at least now it is well furnished.

Everyone here has a huge commitment to improve the conditions in the hospital to make it functional. In Sirte, there are probably around 10,000 people still trapped by the fighting, some of them injured but unable to leave their houses. If the situation calms down over the coming days, people will be able to access the hospital, which will receive many more patients. That’s why it’s so important to ensure that everything – the staff, the medicines, the electricity and the water – is in place.”

MSF has been present in Libya since February 25 and is currently working in Bani Walid, Misrata, Sirte, Tripoli, Yefran, Zintan. To ensure the independence of its medical work, MSF relies solely on private financial donations to fund its activities in Libya and does not accept funding from any government, donor agency, or from any military or politically affiliated group.