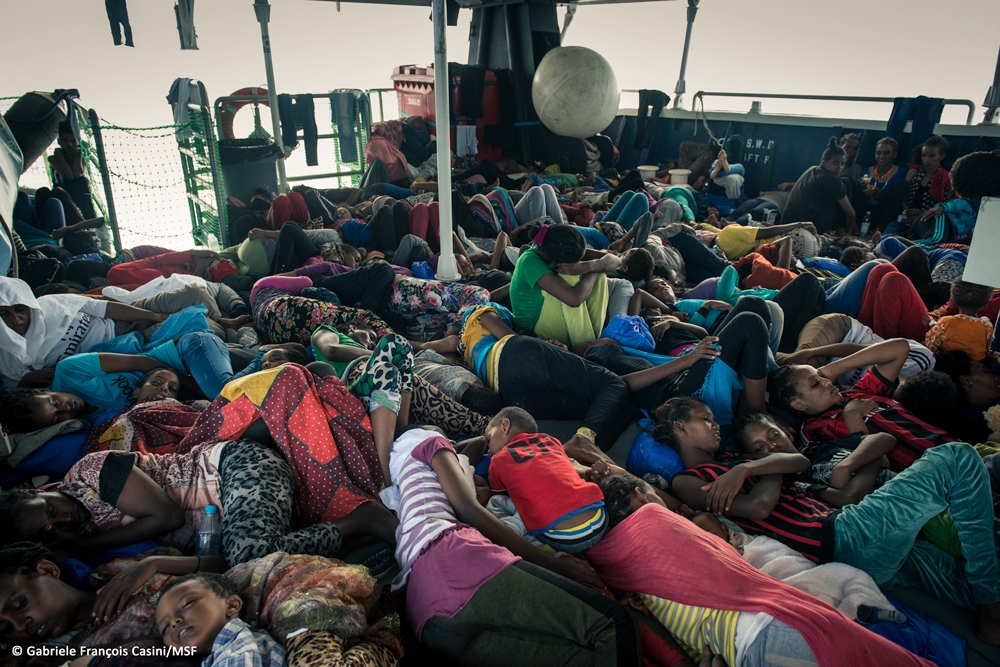 Mediterranean: Busiest day ever for MSF search and rescue teams

Médecins Sans Frontières/Doctors Without Borders (MSF) yesterday rescued 1,658 people in its biggest day of operations on the Mediterranean Sea since operations began on 2 May.

In six separate rescue operations, the three search and rescue vessels - Dignity I, Bourbon Argos and the MY Phoenix, operated jointly with MOAS - brought on board people primarily from Eritrea, Nigeria and Somalia, many of them women (547) and children (199), including many toddlers and babies.

Beginning at 7am, when the Bourbon Argos rescued 353 people from a wooden boat in the international waters north of Zuwara, the day continued with the Dignity I rescuing three inflatable boats with a total of 323 people onboard.

Then the Bourbon Argos rescued another wooden boat bringing a further 650 people on board, and finally the MY Phoenix rescued 332 Eritreans from a wooden boat in the early afternoon.

One of the people rescued by the Bourbon Argos was a pregnant woman who went into labour soon after being transferred onto the boat.

MSF decided to call for an evacuation, and she was transferred to a speed boat operated by the Italian Coast Guard and brought to hospital.

An Eritrean woman woman after being rescued. She travelled in a boat with 332.

“Yesterday was a day of big numbers for MSF’s search and rescue operations, but for our teams at sea the focus is always on the individuals,” said Lindis Hurum, MSF Emergency Coordinator on the Bourbon Argos.

“My most touching memory from yesterday would be of Senait, a young Ethiopian woman who, at eight months pregnant went into labour just after she was rescued.

"Like any father to be, excited and nervous about the birth of his first child, her husband Joseph did not leave her side.

"The young couple was medically evacuated to allow Senait to deliver her baby safely in Italy. Our team is now anxiously awaiting news of the baby’s arrival.”