In the Central Mediterranean, survivors on the Geo Barents give voice to the violence they have experienced and witnessed.

13 January, 2021 - In December 2021, the Médecins Sans Frontieres (MSF) search and rescue vessel Geo Barents saved 558 people across eight rescues of boats in distress in the Central Mediterranean.  Many of these people had not only survived the sea, but also severe violence—inflicted in Libya, from where they had fled; in their countries of origin; and during their journeys. 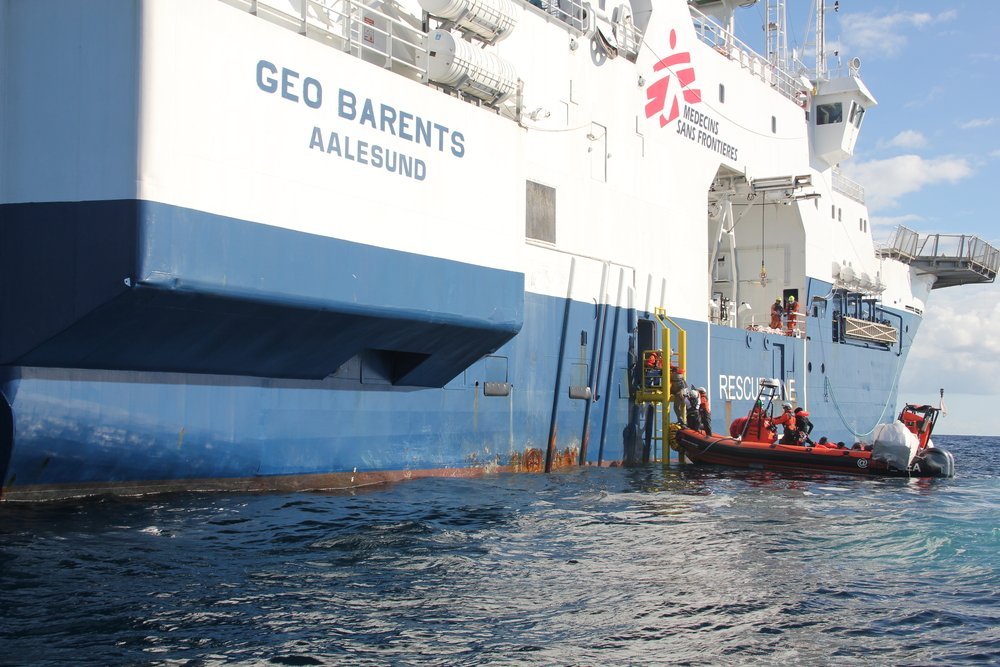 There were several people who arrived on board with physical injuries that were visibly fresh, including fractured bones. These types of injuries required urgent pain management, which can be challenging in the crowded environment of the ship.

Most told our medical teams that these injuries had been sustained just before or during the time they were leaving the Libyan coast. Others had older wounds. 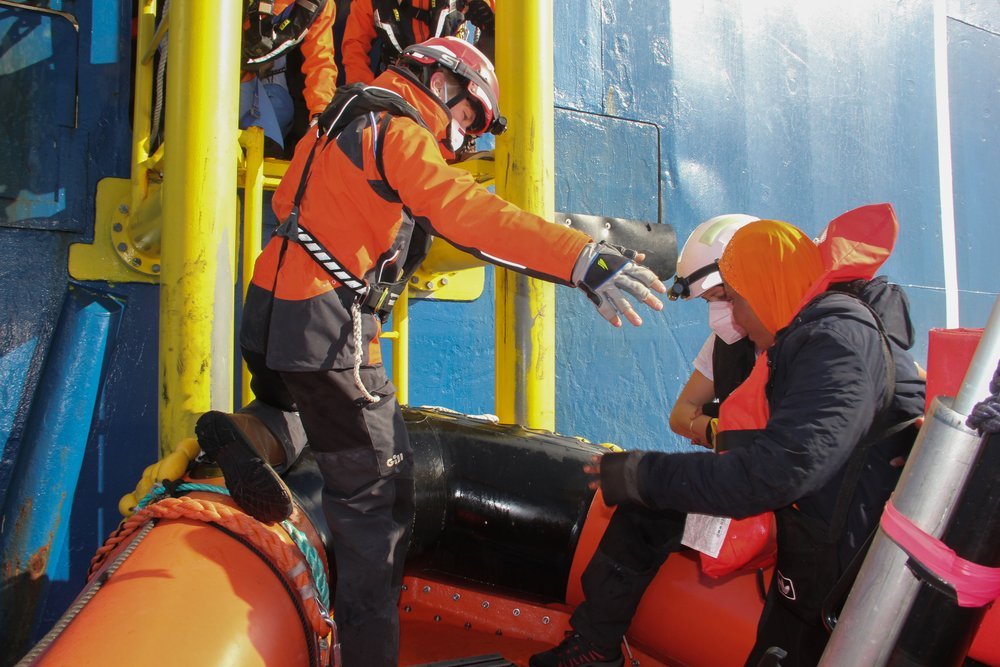 Some people said that their injuries were inflicted in Libya by detention centre guards and non-state armed groups, and others that it occurred at the hands of the Libyan Coast Guard during interceptions at sea.

“I suffered a lot in Libya,” says Aissatou*, a 21-year-old woman from Cameroon.

“When I entered Libya, I didn’t have any scars. Now, my whole body is covered in scars.” 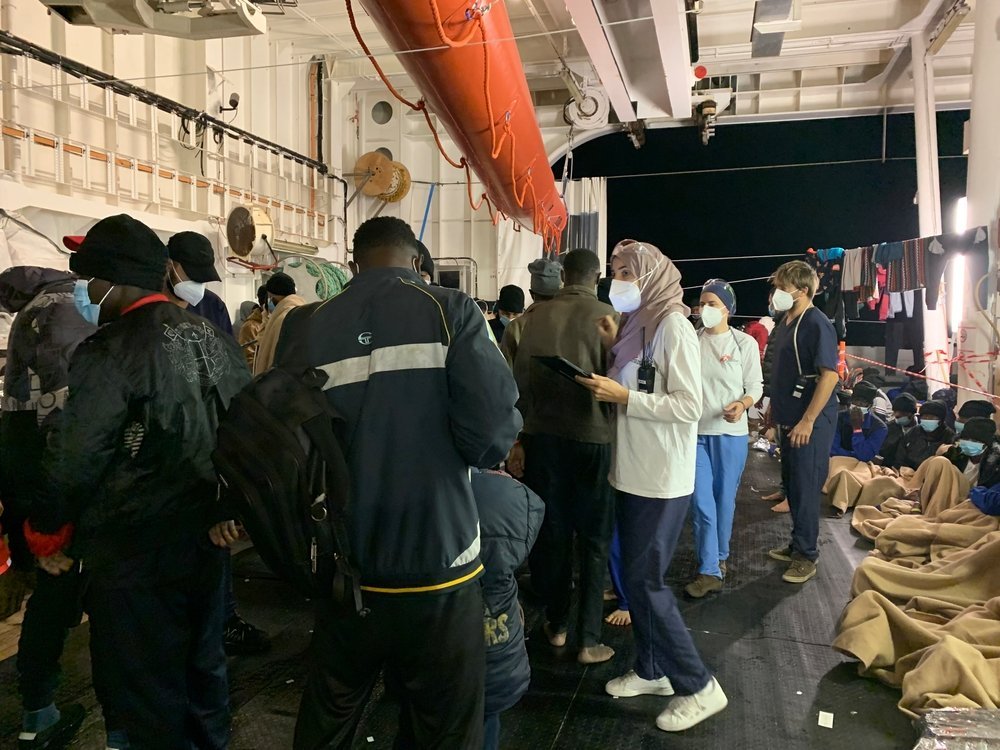 Eloise Liddy/MSF
On December 23, at around 4am in the morning, MSF teams brought 76 adults and children to safety off a packed rubber boat. (December 23, 2021).

Aissatou has a large scar on her chest, a reminder of being stabbed as she escaped from a prison in Libya.

“It was a women’s prison, so the guards were always raping the girls."

"They did not feed us well. We did not have clothes; we lived in the dirt." 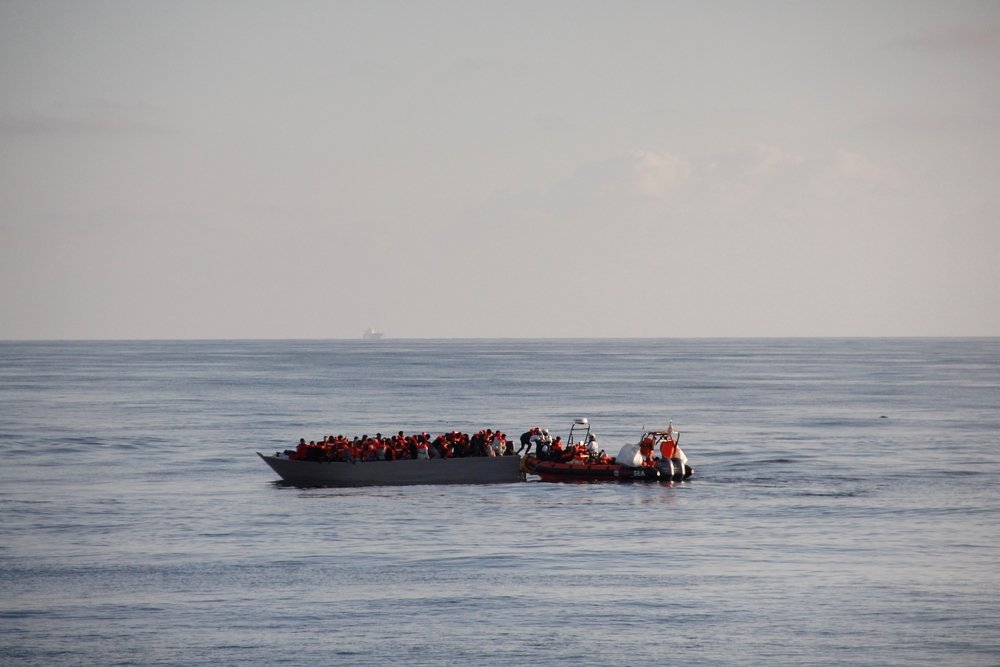 "Whenever we tried to escape, they called the [gangs] to come and whip us… they beat us with their Kalashnikovs.”

One day, several of the women including Aissatou managed to run out of the prison. “When [the guards] saw that the girls were escaping, they took everything they could—iron [bars], weapons—to hit us."

"This is when a guard stabbed me in the chest."

"He stabbed me with a metal pipe,” she says. 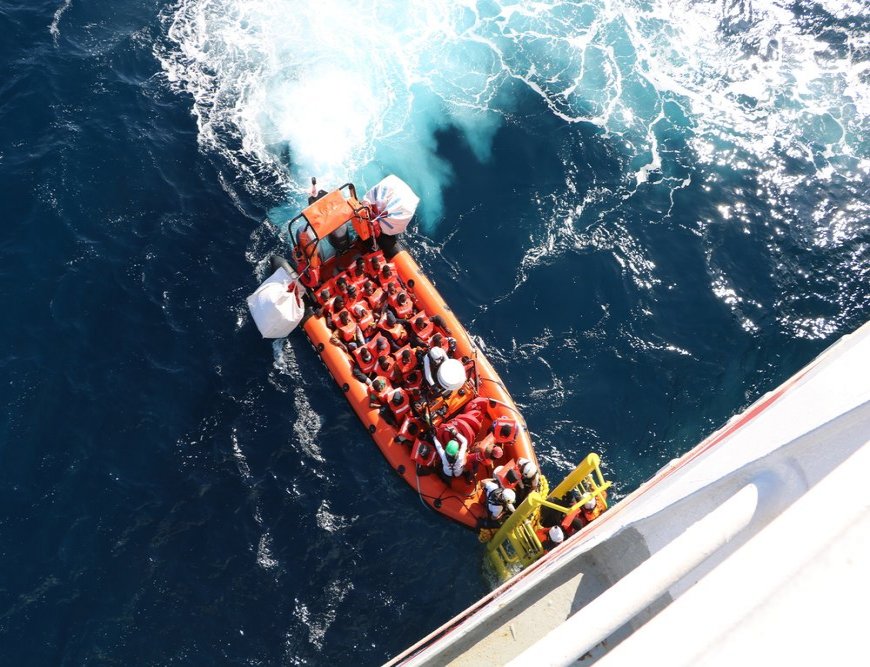 Eloise Liddy/MSF
MSF teams rescued 82 people from a boat in distress, off the Libyan coast. (December 22, 2021).

“Many girls were injured, but we ran anyway. My clothes were damp with blood."

"I asked people in the street to hide me.”

Another man speaks of the violence he experienced in Abu Issa detention centre in Zawiyah, roughly 50 km from Tripoli, where he was held for over a year. 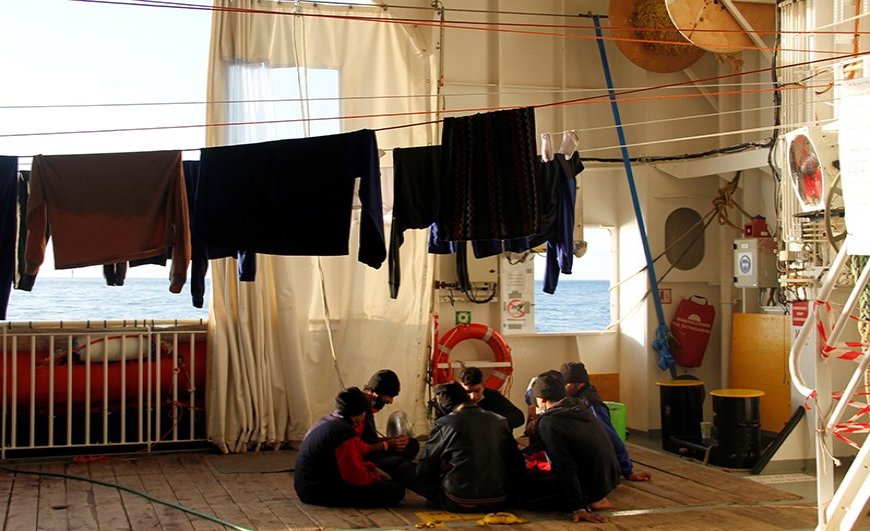 Eloise Liddy/MSF
A group of survivors on the shelter deck of Geo Barents. (December 21, 2021).

“They would beat us every morning… sometimes they hit you with their guns, [or] wooden or metal pipes; electricity; everything. I suffered from a lot of injuries.”

“People told us about being beaten or stabbed, with wooden or metal sticks,” says MSF medical team leader Stefanie Hofstetter.

“Others reported being beaten with guns."

"We also saw people with smaller wounds all over their bodies: when we asked about these wounds, they usually said that they’d been burnt with hot water or melted plastic poured onto the skin.”

"When we asked about these wounds, they usually said that they’d been burnt with hot water or melted plastic poured onto the skin."

Hofstetter says that medical teams on search and rescue ships in the Central Mediterranean have been treating rescued people with these types of injuries for years. 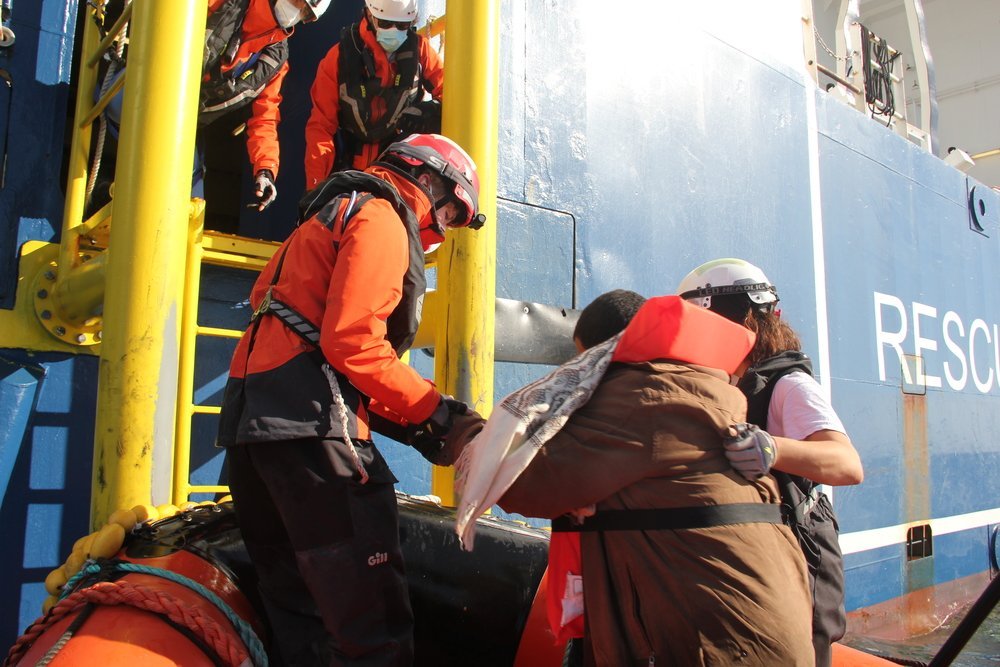 “The situation has not changed: the violence is always occurring."

"The only thing that changes is how the violence is inflicted upon people.” 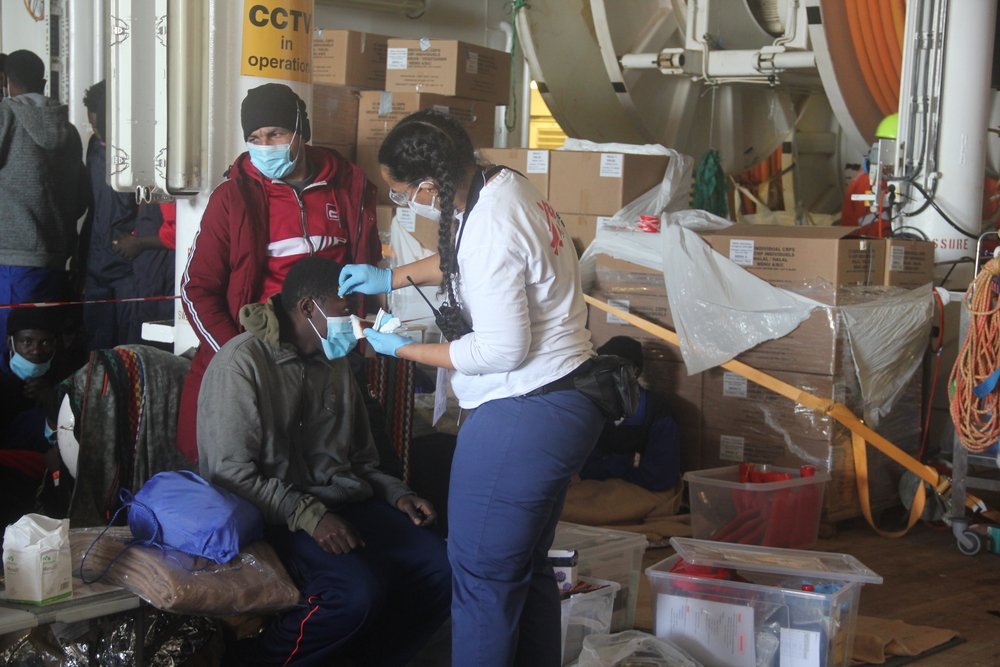 Many had experienced this abuse over a long period of time.

Aissatou was among those who experienced sexual violence while being held by traffickers in large warehouses near the sea, before entering the boats leaving Libya.

“The smugglers, they rape us in the campo (warehouses)."

"If you refuse, they will put the blade on you... you have no choice.” 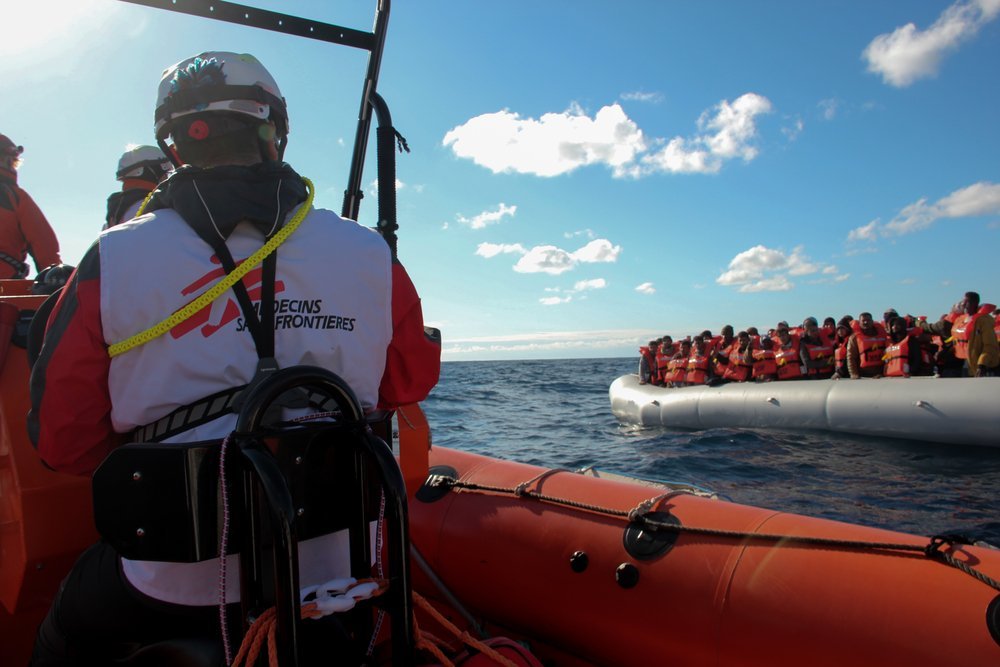 Eloise Liddy/MSF
MSF Search and Rescue teams preparing the rescue of a rubber boat in distress with 49 people on board. (17 December, 2021).

Ahmed*, 17, from a Sub-Saharan African country, witnessed rape while in prison in Libya. “A lot of people suffer… for women it is hard.

Libyan men will take a woman [from the prison]; she will come back sick, with no medical assistance.”

"If you refuse, they will put the blade on you... you have no choice.”

Ahmed says that in Libya, it was impossible for survivors to report these horrific experiences or ask for help for fear of retaliation: “If you speak, they kill you or [the woman].”

Aissatou agrees: “We suffered many things, but we did not speak [in Libya]. Who would we complain to? There is no law. You can only pray to God that if you go in the water, someone will save you.”

The opportunity to speak

For survivors who have experienced long periods of fear and stress associated with severe violence, the MSF medical team on the Geo Barents focuses on basic mental health support that begins to provide a sense of safety and dignity. 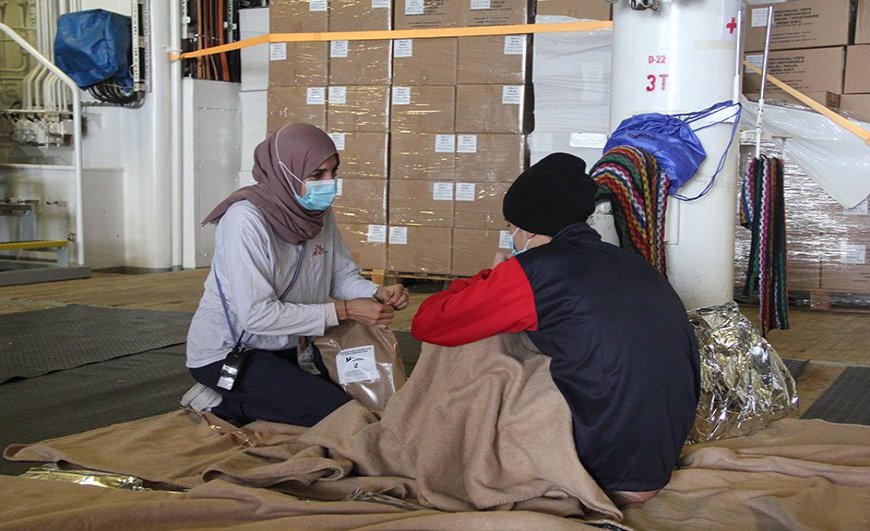 Eloise Liddy/MSF
Hager, MSF's psychologist on board the Geo Barents talking to a survivor. (December 18th, 2021).

Psychologist Hager Saadallah says the opportunity for survivors to speak with a medical professional and have their experiences acknowledged is often one of the most significant things the team can offer.

“What people need at this point, as they are still on the move, is to simply have the possibility to speak about what they have been through”

“What people need at this point, as they are still on the move, is to simply have the possibility to speak about what they have been through,” she says.

“Being able to speak, and have someone listen, is completely normal for you or me."

"But it’s something survivors often haven’t had access to.” 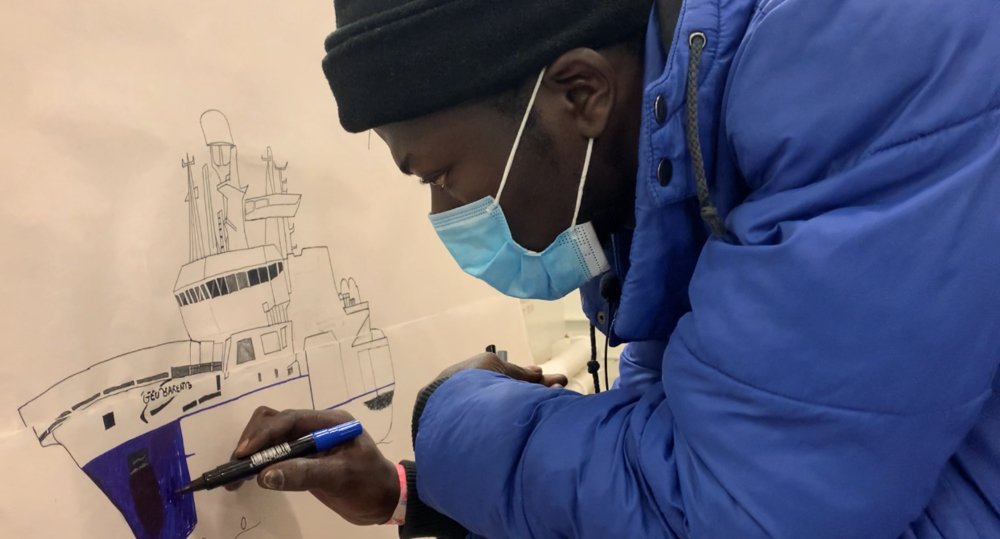 Geo Barents midwife Kira Smith says this opportunity is especially important for those who have experienced sexual violence.

“Often, when I speak with one of the survivors, it’s the first time they’re talking to anyone—especially a professional—about what happened to them,” says Smith.

“I aim to make them feel safe and valued, and to let them know that it’s not their fault." 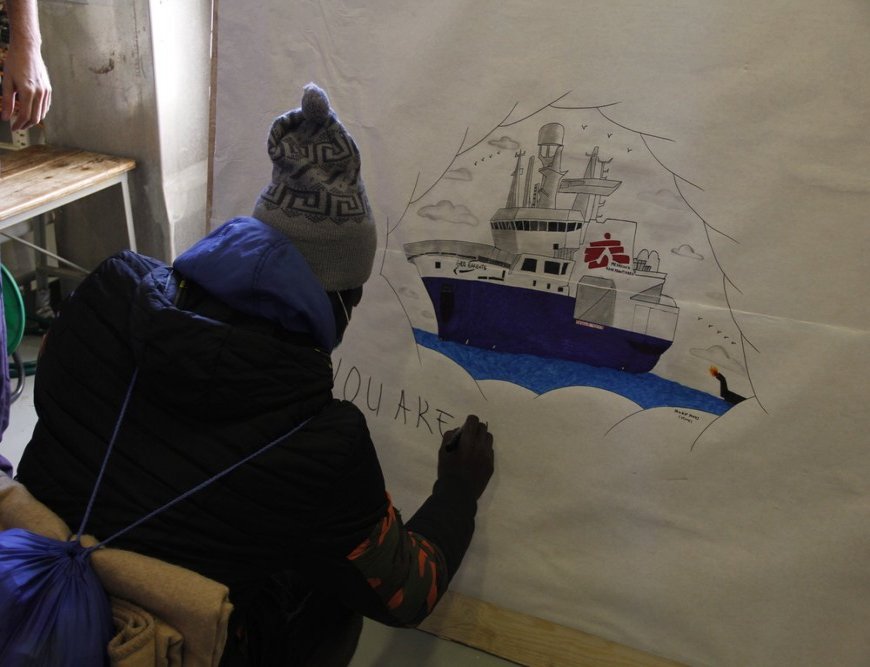 Eloise Liddy/MSF
François* from Cameroon has been sharing his art with the MSF team during the last 9 days to express his gratitude and raise awareness about the abuses people face. (December 30th, 2021).

"That sets the foundations for what they should expect and feel they deserve from care providers down the track.”

“While there’s a lot we can’t do for people in their short time on the ship, they deserve to be heard and to be treated with dignity.”

Between 17 and 24 December 2021, MSF teams on board the Geo Barents rescued 558 people from boats in distress in eight rescue operations in the Libyan and Maltese Search and Rescue Regions. Among the survivors, 35 were women, two of them pregnant, and 174 were minors, of whom 143 were unaccompanied.