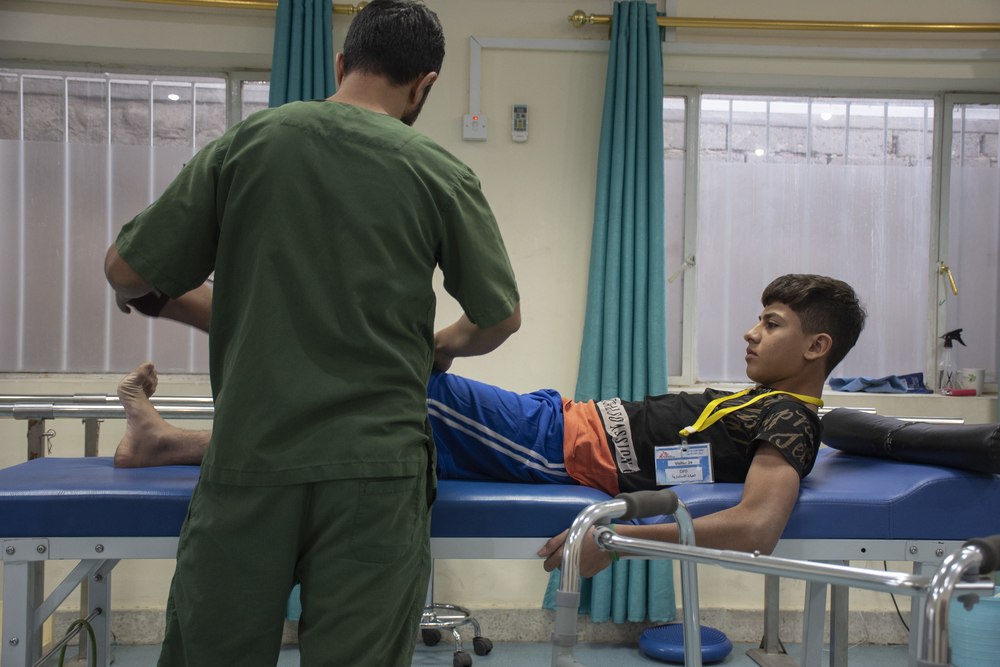 In 2017, when the war to retake Iraqi cities from the Islamic State (IS) group was leaving scores of people dead, wounded or maimed, Médecins Sans Frontières (MSF) opened the Baghdad Medical Rehabilitation Centre (BMRC) in the Iraqi capital to provide early medical and physical rehabilitation to the men, women and children wounded during the fighting.

As the war fell from the headlines, the BMRC expanded their admission criteria and began to receive the survivors of non-violent trauma, such as those involved in traffic accidents and industrial accidents well as those who continued to be injured in the ongoing violence in Baghdad.

When mass protests over deteriorating living conditions, unemployment and the lack of basic services broke out in Baghdad on October 1st, health facilities in the capital were inundated with those wounded in the violence accompanying the protests.

From the beginning, MSF kept a close eye on the situation in the capital and reached out to several health facilities to identify their needs, providing donations of emergency medical supplies and support. 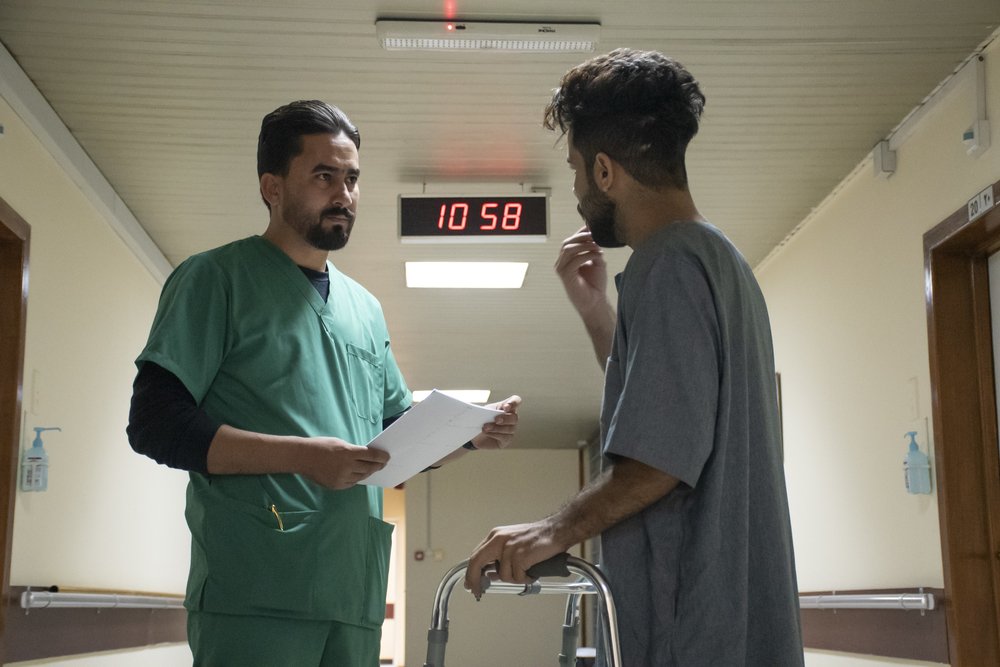 At the same time, the BMRC, which initially had a 20-bed capacity, was expanded to be able to care for up to 30 patients from October until December. The centre treats those in need of early physiotherapy and post-operative care, including mental health support to ease and treat accompanying mental health issues.

At around 9:30 AM on October 27, Yasser Falah’s* wife told him that she was pregnant. Two hours later, he was hit by a tear gas canister and rushed by a tuk-tuk to a nearby hospital. He was then referred to another hospital where he underwent two surgeries before being transferred to the BMRC to start his rehabilitation.

Yasser has troubles falling asleep at night. His mind travels to the country’s north where he had to dig his mother’s body out of the wreckage of their house following an airstrike during the war to retake Iraqi cities from IS. Despite taking sleeping pills he gets no more than a couple of hours of rest at night. He has lost his appetite and only takes a bite from the food stacked next to his bed every now and then.

“I graduated from the Institute of Fine Arts, but after the injury, I lost my craving to draw. I always think of my family and my work, I am the only source of livelihood for them but because of my injury I haven’t been working for the past three weeks,” he says.

With the metal spikes of an external fixator sticking out of his left leg, Yasser uses crutches to move around and go see other patients at the BMRC. He loiters on a rooftop to enjoy a few hours of sunshine and some cigarettes along with other patients. They befriend each other up there where they can share their hopes and worries, vent their emotions and dream of a speedy recovery to resume their lives. 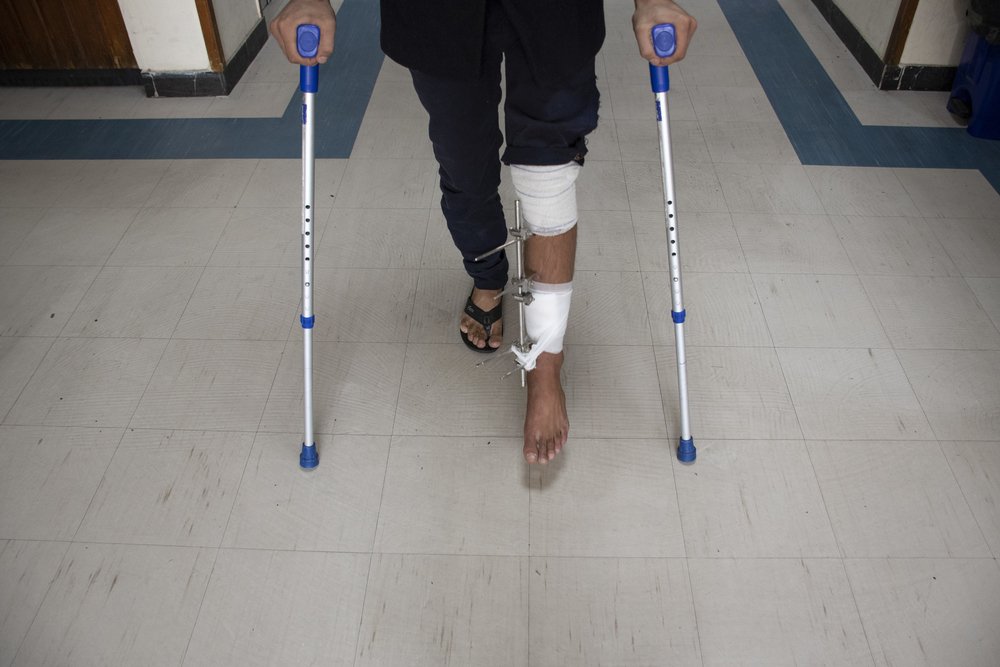 Yasser’s concerns are echoed by other patients at the BMRC who were injured during the protests. Whilst their wounds are not that shocking to the experienced Iraqi medical staff employed by MSF, the injuries of many patients are comparable with the war-wounded received in 2017 in terms of severity.

It took hours to extinguish and then remove the tear gas canister that was lodged in Saif Salman’s right leg. After several surgeries in different health facilities in Baghdad, the decision was taken to amputate it. Any further interventions seemed pointless. It had to be done.

“I was standing on al-Jumhouriyah Bridge when a tear gas canister hit my leg. It embedded in my leg and kept on fuming gas. I opened my eyes to tuk-tuk drivers and other people swarming over me. They carried me to a hospital,” he says, adding that he was shot from close range. 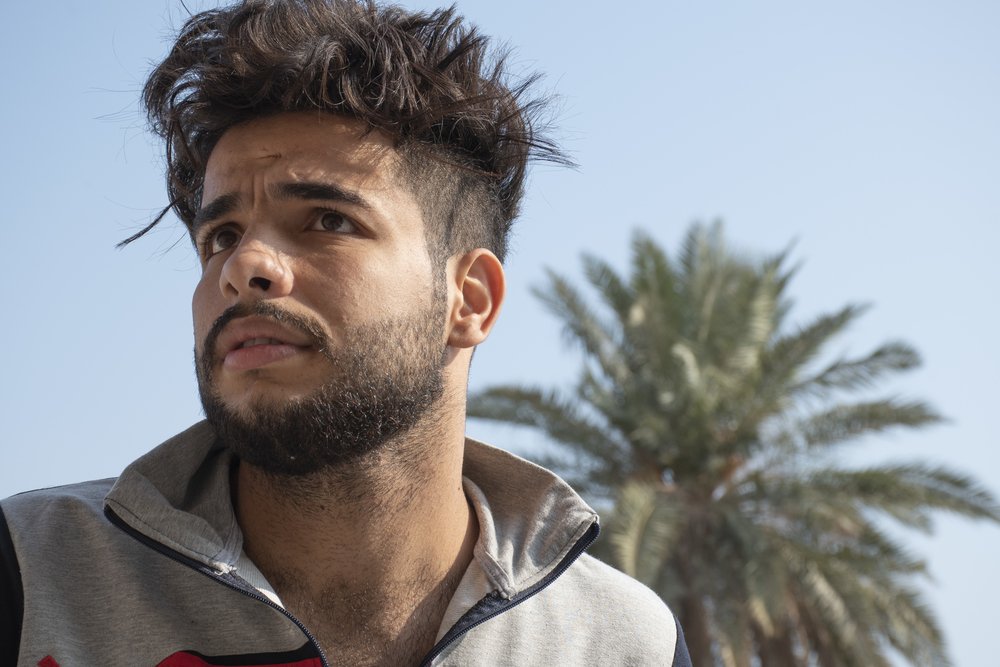 Nabil Salih/MSF
Saif Salman was injured when he was hit by a tear gas canister during recent protests in Baghdad.

“It’s true, they amputated my leg but I have two hands and another leg. Three more limbs that I can work with. I didn’t lose anything. In fact, I feel lighter now,” 24-year-old Salman says with a grin on his face.

His sense of humour will certainly boost his recovery process and those of his fellow patients but his trauma and anguish is hidden just below the surface. Salman breaks into tears when he remembers his classmate and friend who was killed during the protests.

“I cannot bear seeing his picture and get sad when I remember him. He didn’t deserve to die - I wish if it was me who died not him,” he says, sobbing.

Inside the BMRC, a multidisciplinary team of specialised doctors, nurses, physiotherapists, psychologists and non-medical support staff work not only to treat the patients in the in-patient department but also care as outpatients for those who are well enough to go home.

The work begins almost as soon as a patient’s anaesthetic wears off and the patient is referred to the BMRC by a network of doctors in Baghdad’s hospitals or by the MSF team touring hospitals in the city in search of patients in need of intensive post-surgery care and rehabilitation. 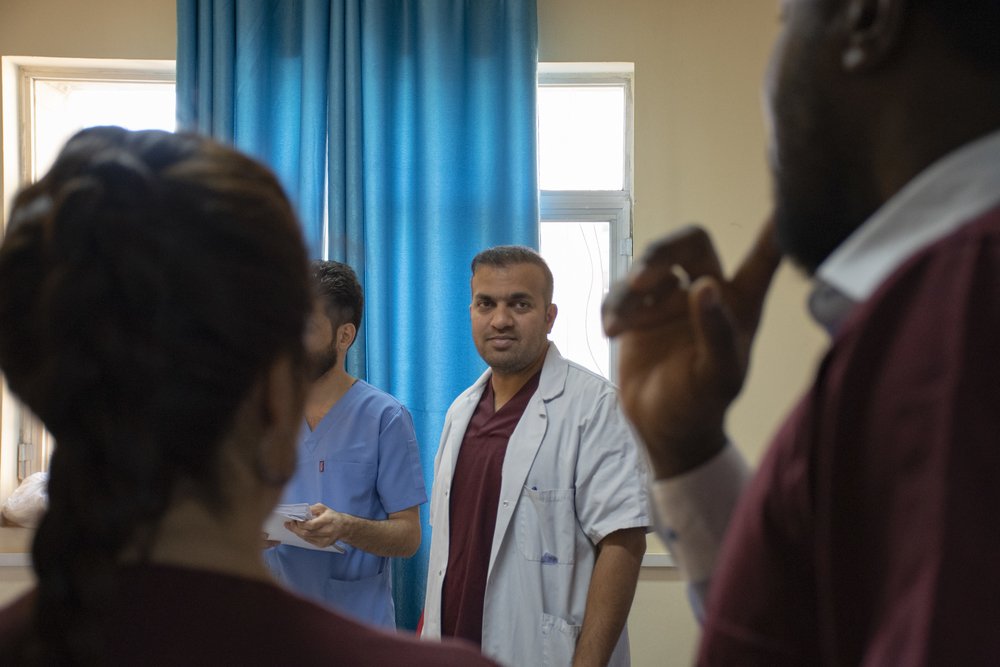 Dr. Khalaf says that the consequences of not receiving early post-operative care can include blood clots and infection. By reducing the impacts of the injuries and accelerating the patients’ recovery process, the medical staff at the BMRC “help them to reintegrate in their communities as active individuals, not a burden on other people.”

In addition to the physical rehabilitation, medical staff at the BMRC see mental support as a key ingredient of rehabilitation. In frequent mental health sessions, psychologists and counsellors seek to address depression and anxiety amongst patients, deal with their often traumatic memories and help them adjust to their new realities.

To date, 75 percent of the patients treated by MSF in the BMRC has been discharged with improved mental health status.

The lasting social impact of violence

Like many of those injured during recent violence in Iraq, 16-year-old tuk-tuk driver Kadhim Dhaygham and his brother were the breadwinners for their family. Like many others, they began to work from an early age due to the same dire economic conditions that pushed them to protest. 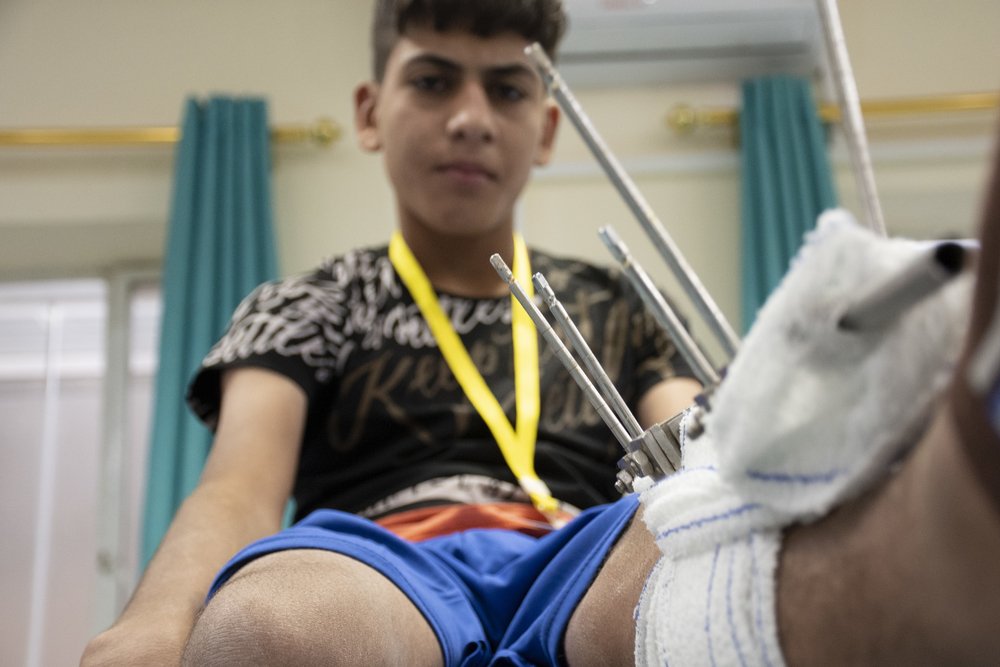 On the afternoon of Sunday October 27, after parking his tuk-tuk near al-Jumhouriyah Bridge and trying to cross the street, a tear gas canister slammed into Kadhim’s leg.

“It was so powerful that after hitting the person in front of me, it hit my leg and then the guy behind me. I tried to get up on my feet and started crawling then one guy carried me to a tuk-tuk. The driver drove me out to the Neurosurgery Teaching Hospital where they referred me to al-Kindy,” Kadhim recalls.

After undergoing emergency surgery and having an external fixator applied to support his broken bones in another hospital, Kadhim’s surgeon referred him to the BMRC, where Kadhim says medical staff “brought life back” to his leg with immediate physiotherapy.

Despite the improvement in his condition, Khadim has begun to feel that he is “deprived of everything.” He feels bitter for not being able to see his friends more often or leave his house. He longs for a normal life, enjoying outdoor dinners with friends and tuk-tuk rides in the city. Kadhim, who hails from a poor neighbourhood in the eastern part of the Iraqi capital, cannot wait to get back to work and help his older brother provide for his family.

“The two of us are responsible for supporting our family. We are like a pair of legs, if one of us falls, the other suffers too,” Kadhim ends.

*Name has been changed to protect identity.