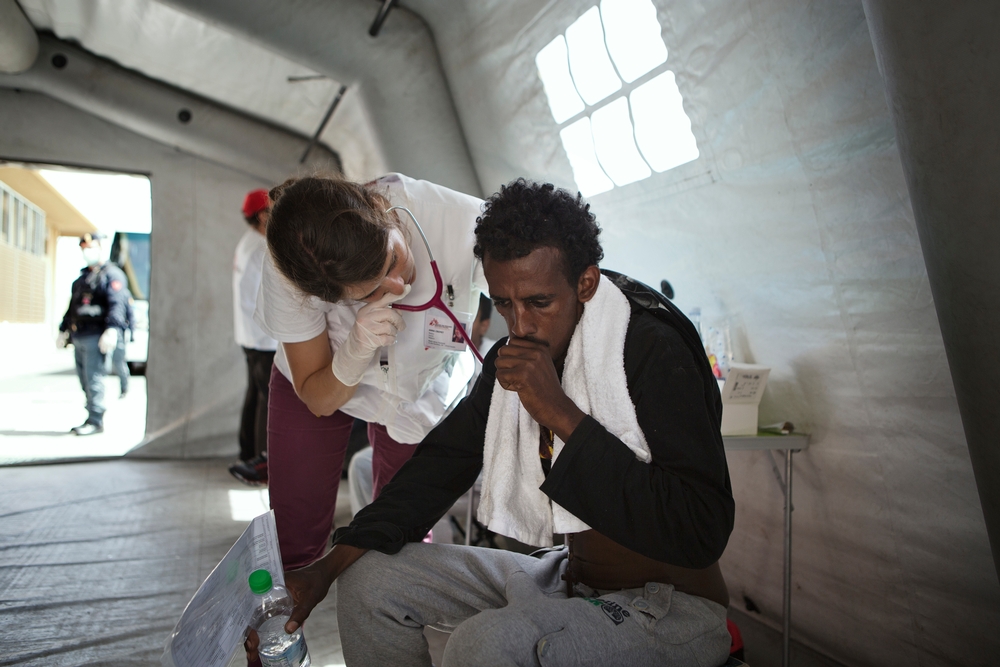 On Sunday 31 May, a team from Médecins Sans Frontières/Doctors Without Borders (MSF) provided emergency psychological support to recently rescued migrants at the port of Augusta, Sicily.

454 migrants had been rescued at sea trying to cross the Mediterranean from Libya over the weekend.

Seventeen of the passengers brought to Augusta were already dead before being rescued, due to asphyxiation from inhaling gasoline vapour during an engine breakdown.

Eighteen people received counselling from MSF’s psychological first aid team, who were deeply traumatised by having witnessed the deaths of their friends and family members during the journey.

The support provided was the first intervention of a new MSF psychological first aid team, composed of cultural mediators and a psychologist, which is on standby to be deployed to different landing ports in Italy within 72 hours after receiving any alert.

"It is clear that the situation was extremely difficult for the people onboard and many people were traumatised from having experienced very distressing moments during the journey.

We have set up this team in order to be able to provide psychological first aid to those who have suffered particularly traumatic experiences and need urgent psychological care upon arrival" says MSF psychologist Dario Terenzi. 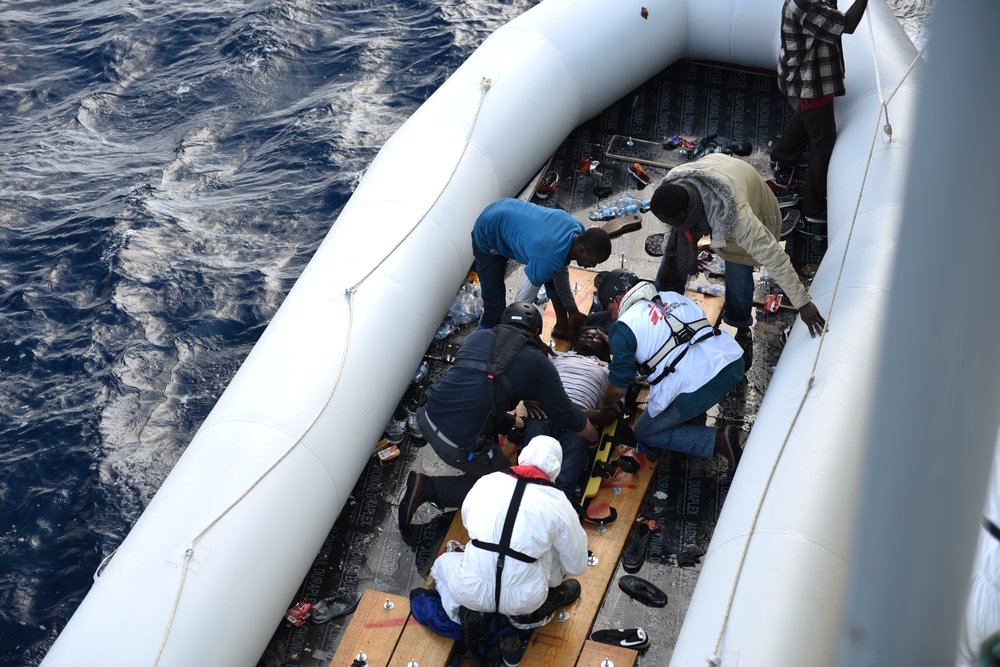 Francesca Mapelli/MSF
During the early morning rescue, one man was seriously exhausted and was too weak to get off the small boat on his own. The MSF team put him on a stretcher and lifted him on the Bourbon Argos where doctors rehydrated him and warmed him up.

In addition to the emergency psychological care, MSF treated over 50 people who had suffered burns from having come in contact with burning gasoline on the boat, providing them with disinfection and dressing.

“The people had been standing on the boat with water up to their knees. When their engine broke down, the burning gasoline started to float on the water inside the boat and came in contact with the skin of several people which caused several bad burns” explains Chiara Montalvo, MSF’s Field Coordinator in Sicily.

The MSF team in Sicily – made up of doctors, nurses, psychologists and cultural mediators – screens newly arrived migrants and provides them with medical assistance, both in the hours after they disembark and during their stay in the primary reception centre. 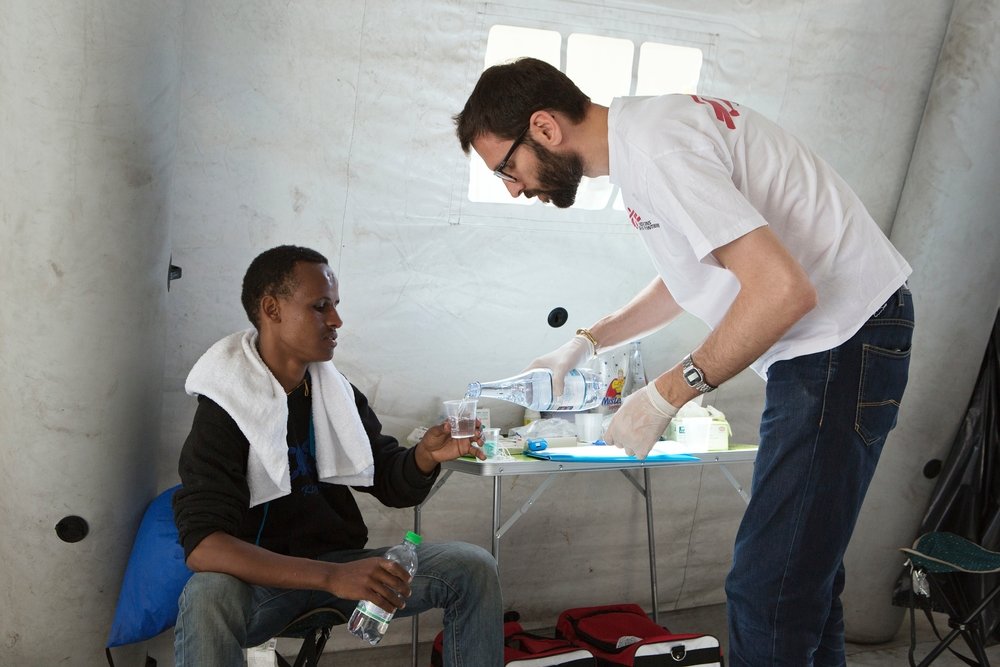 Alessandro Penso
Stefano Di Carlo, MSF coordinator, pours some water for an Eritrean man who has just arrived to Sicily on the search and rescue vessel.

Following the busy weekend for MSF’s teams in Sicily, the MSF Bourbon Argos search and rescue vessel rescued 325 people from three different boats on early Monday morning, most of these migrants coming from sub-Saharan Africa.

"For most of them, this moment ends an ordeal which has lasted months, even years.

"A bureaucratic ordeal ahead may also last as long - but at least on the Argos deck they can rest, aware that they have escaped the life threatening crossing from the shores of Libya” says Francois Zamparini, MSF’s emergency coordinator onboard the Argos.

MSF has provided medical screenings and distributed water and blankets to the migrants onboard the Bourbon Argos. 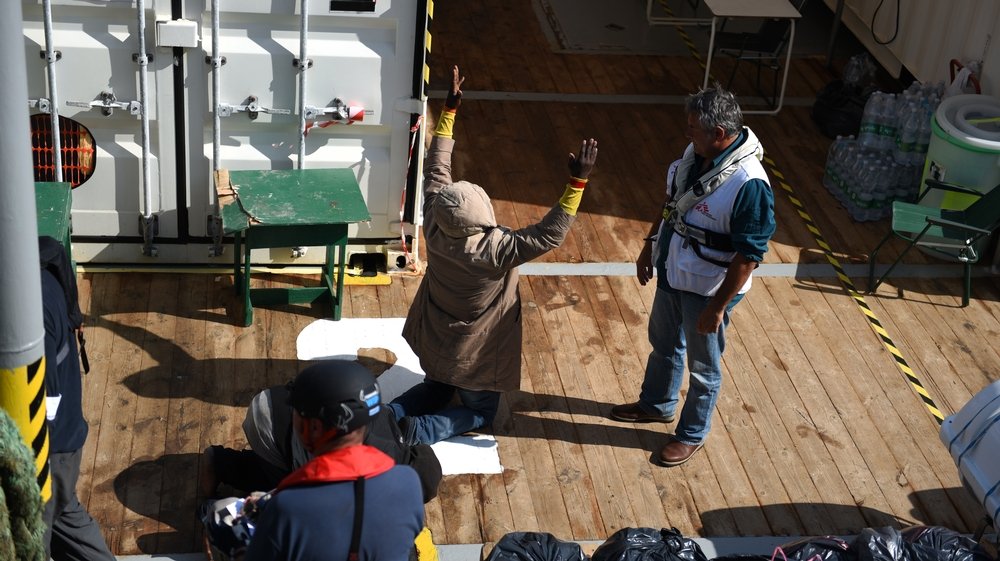 Francesca Mapelli/MSF
MSF ship Bourbon Argos is the first safe haven that these people have known in several months. While getting on the deck this feels finally true. It’s a moment to be happy, to praise, to show gratitude and let go of tension.

The ongoing work of MSF in the Mediterranean

MSF is working in the first reception centre in Pozzallo (Ragusa province, Sicily) in collaboration with the Ministry of Health to provide medical services to migrants, asylum seekers and refugees from the time they arrive and during their stay in the centre.

For over a year MSF has provided psychological support in all secondary reception centres in Ragusa province.

In May, MSF began to offer immediate psychological first aid to survivors from traumatic events during the sea journey, for example those who have experienced shipwrecks.

A team composed of cultural mediators and a psychologist are ready to be deployed to different landing ports in Italy within 72 hours after receiving the alerts.

MSF also provides mental healthcare support to people living in reception centres in Ragusa province. During the first four months of 2015, the team has screened 169 people and provided support to 76 patients. Almost 40% of them suffered from Post Trauma Stress Disorder (PTSD).

Since early May, MSF is carrying out search and rescue operations in the Mediterranean Sea through two ships – the MY Phoenix (operated jointly with Migrant Offshore Aid Station) and the Bourbon Argos.

MSF teams onboard work alongside search and rescue crews to provide medical assessment and care. The medical care ranges from primary care right through to resuscitation and advanced life support.

Find out more about our rescue work in the Mediterranean