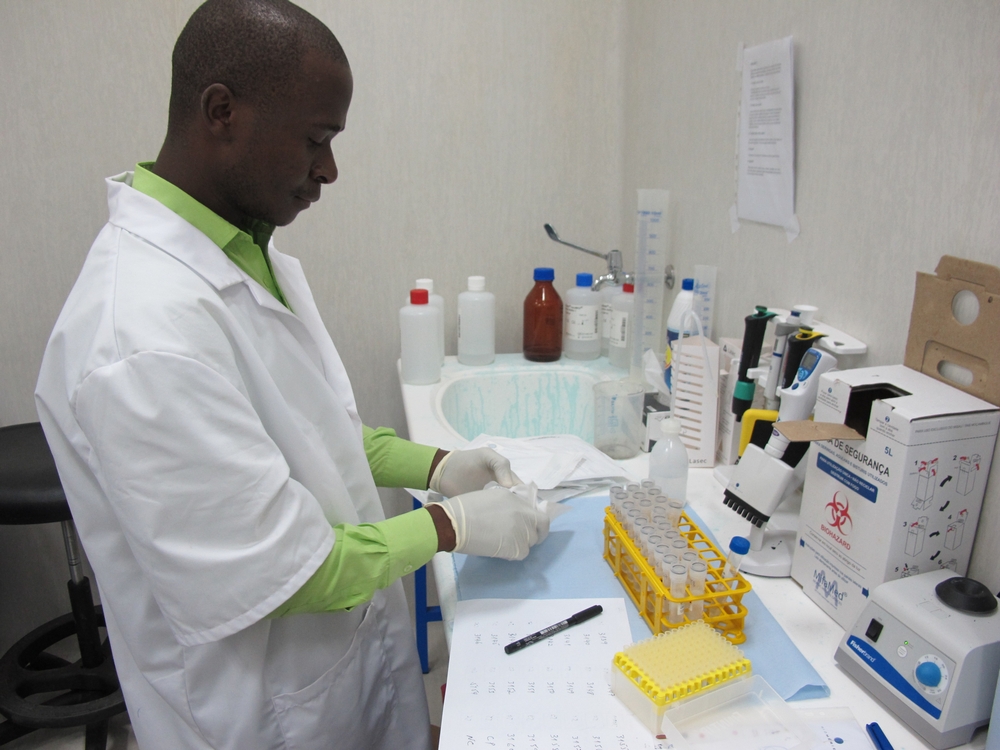 Mozambique: Bringing high-end care to those who need it most

In the informal market of Avenida 24 de Julho, in the heart of Maputo, tomatoes burst with sun and dumpsters with wet trash. Passers-by squeeze past piles of second-hand clothes that flirt dangerously close to the brown flows left there by this morning’s rain.

Down the road, a crowd waits under the shade of acacias outside Jose Macamo hospital, one of the three public hospitals in the 1.7 million-strong city.

They are here for their CD4 count, a test that measures how weak the immune system has become due to HIV and, according to the result, determines if they are eligible to treatment by antiretroviral drugs (ARVs).

“Disculpa! Disculpa!” (excuse me) we say as we cut through the crowd that pile thick into the hallway. With an HIV prevalence of 17% in Maputo, the virus is very much part of the daily life of the Mozambican capital.

We take a right into a narrow corridor where the faded yellow paint peels off in parts. Ilidio Silva Cavele turns a key. He opens a door to another world.

Only his bright anise shirt peeping from under his blouse breaks the blinding white of the room, a sterile cocoon for the viral load machine he turns on.

A few months ago, when MSF – with support from UNITAID – introduced the machine in the hospital, 25-year-old Ilidio was handpicked by his supervisor from the Mozambican Ministry of Health to be one of the three lab technicians trained to operate the machine, and he’s quite proud to show off his delicate handling of the state-of-the-art technology.

“I had heard of it at school, and it was very exciting to go from theory to practice,” he says.

Viral load monitoring has been used for years in Western countries and is recommended by the World Health Organization as the gold standard of care for HIV.

Unlike the CD4 test that is used for monitoring in most poor countries and gives only an indirect indication of the disease’s progression, this technology calculates precisely how much virus is present in the patient’s body.

It allows physicians to detect right away how well the ARV treatment is working, if the patient is not taking his drugs properly or has developed resistance to the first line of HIV drugs.

Thanks to this technology, HIV can become a chronic condition despite which, like diabetes or high blood pressure, HIV-positive people can live a long and healthy life.

But in places where it is most useful – countries such as Mozambique, where the needs are high but the funds low – viral load monitoring is only slowly being introduced.

In Mozambique, with the help of a grant from UNITAID, last August MSF introduced the first viral load machine in the public sector for the benefit of patients all over Maputo city.

For the first part of the process, Ilidio picks up a stack of paper blotted with blood stains; they are the first batch of the 140 samples coming in from MSF’s projects in Maputo that will be tested today. Ilidio leaves his smile and jokes (“I’m not even married yet, you know?”) and focuses on the minutia of lab work.

What he is doing is high-end technology; from the dried blood smeared in a sheet of paper the machine spits out a drop of clear, innocent-looking liquid that contains the deepest secret of the patient’s health: his RNA, a molecule which, with DNA and proteins, forms the base of all life. And, weaved into this building block of life: the HIV virus.

So, here it is, carefully manipulated by Ilidio’s deft hands: humanity’s deadliest enemy which, in the 30 years since it was identified, has infected over 70 million people – more than World War II’s casualties. Half of them have died already.

About 36 million people, like the throngs of women in colorful dresses pouring out of Maputo Hospital’s waiting area, need to receive treatment, either now or once the disease has done more damage in their bodies.

And more importantly, their treatments need to work well. It takes this high tech machine to ensure that it does.

Ilidio carefully brings the tiny vials to the next series of machines which, a bit like a microscope, will amplify the results already obtained so as to better detect how much virus there is in the samples.

This is the best news an HIV-positive patient can receive. It means that his treatment is working very well; by keeping an “undetectable” viral load not only he will never get sick because of HIV, but also the risk of his transmitting the disease to others is reduced by 96%.

“In terms of public health, viral load monitoring is key to beating HIV. That’s why it should be rolled out in the countries that need it the most, even if they lack financial resources,” insists Daniel Remartinez, MSF’s medical coordinator in Maputo.

Roll-out of technology is possible

Sarah-Eve Hammond/MSF
The main obstacle, of course, is financial. Viral load tests are expensive, especially for countries with high HIV prevalence which need to churn out hundreds of them each day.

And, until easy-to-use “point of care” devices arrive in the market, the machines need to be manned by highly trained professionals. But MSF’s experience in seven countries that have started to use routine viral load monitoring proves that the roll-out of the technology is possible.

In parallel, its partner in this project - UNITAID – maintains pressure on manufacturers to push prices down. Already, prices for a single test have gone down 35% in the past two years, down to under 20 USD today, and further price reductions are foreseeable in the near future.

In Mozambique MSF has introduced viral load technology into the public sector to help monitor how patients on ARV are doing. The Mozambican health authorities have plans to expand viral load monitoring to the whole country within two years according to a protocol that should be based on MSF’s experience with the support of the government.

MSF is introducing viral load monitoring in 8 African countries (the Democratic Republic of Congo, Lesotho, Mozambique, Malawi, South Africa, Swaziland, Uganda and Zimbabwe), thanks to a three-year grant from UNITAID.

Based on the specificities of each country, accessibility to the patients, and integration within the Ministry of Health, viral load monitoring can take many forms; from improving laboratory testing facilities and installing top of the art diagnostic platforms in the country, as is the case in Mozambique and Zimbabwe, to  rolling out new innovative “point of care” viral load devices that can be managed by lower-cadre health staff in smaller health structures, as is the case in Malawi and Uganda.

There is no justification for why patients in resource limited settings should not benefit from state-of-the-art diagnostic tools, when these become available. As the main single barrier to access to these tools is price and funding, MSF calls for reduced prices from laboratory manufacturers, and increased funding for treatment monitoring.