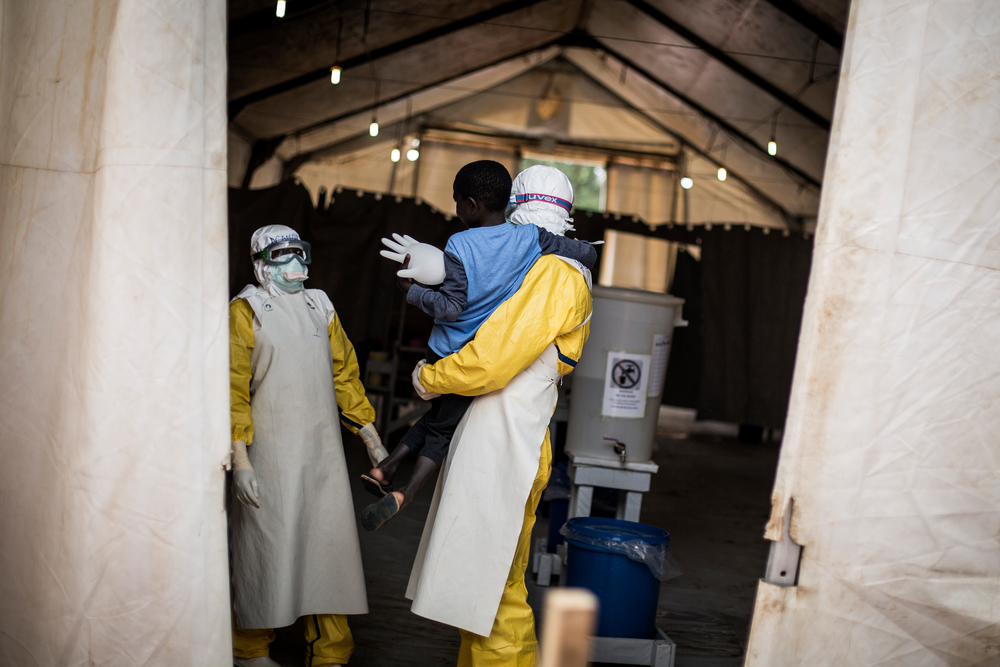 More than a year into the ongoing Ebola outbreak in north-eastern Democratic Republic of Congo, the disease has killed over 2,100 people.

The mortality rate is 67%, comparable with the 2014-2016 West Africa outbreak, when neither therapeutic treatments nor a highly effective vaccine were available, unlike today; as many as 40% of the deaths are represented by people who died at home before they could even be identified as patients[1].

While the pace of transmission appears to have slightly ebbed in recent months, some areas have been active hotspots for over a year now and other hotspots have become active again, after extended periods without reporting new cases.

A significant issue is that the pace of vaccination activities is too slow and only a fraction of the eligible population is benefiting from this critical tool[2], says Médecins Sans Frontières (MSF). One reason is the lack of transparency concerning vaccine supply chains by the World Health Organisation, which imposes strict limits on the number of doses deployed in the field.

MSF urges for an independent committee to be formed to facilitate a more transparent management of the vaccination programme.

Thanks to the efforts of the Ministry of Health and the World Health Organisation, approximately 225,000 persons have been vaccinated with rVSV-ZEBOV, an investigational vaccine produced by Merck that has shown very high levels of efficacy. This number remains largely insufficient though, as shown by the fact that the outbreak keeps “coming back’” to areas that have been supposedly covered by vaccination.

Vaccination – especially of healthcare workers – can be scaled up

“We think that upping the pace of vaccination is necessary and feasible: at least 2,000-2,500 people could be vaccinated each day, instead of 500-1,000 as is currently the case” says Dr Isabelle Defourny, MSF director of operations. “We have a vaccine that is proven to be safe and effective; we have teams ready to be deployed; there is no problem with the cold chain; there are enough doses to cover the current needs and to allow for an extension of vaccination coverage, as recently confirmed by Merck, the vaccine manufacturer; and when there is enough awareness, the vast majority of the population wants to be vaccinated.”

“Yet WHO is restricting the availability of the vaccine in the field and the eligibility criteria and their application for reasons that are unclear” Dr Defourny continues. “Even when it comes to frontline health workers (a known, easily reachable population), in a hotspot of the outbreak such as Beni, almost a third of them reported they have not been vaccinated.” 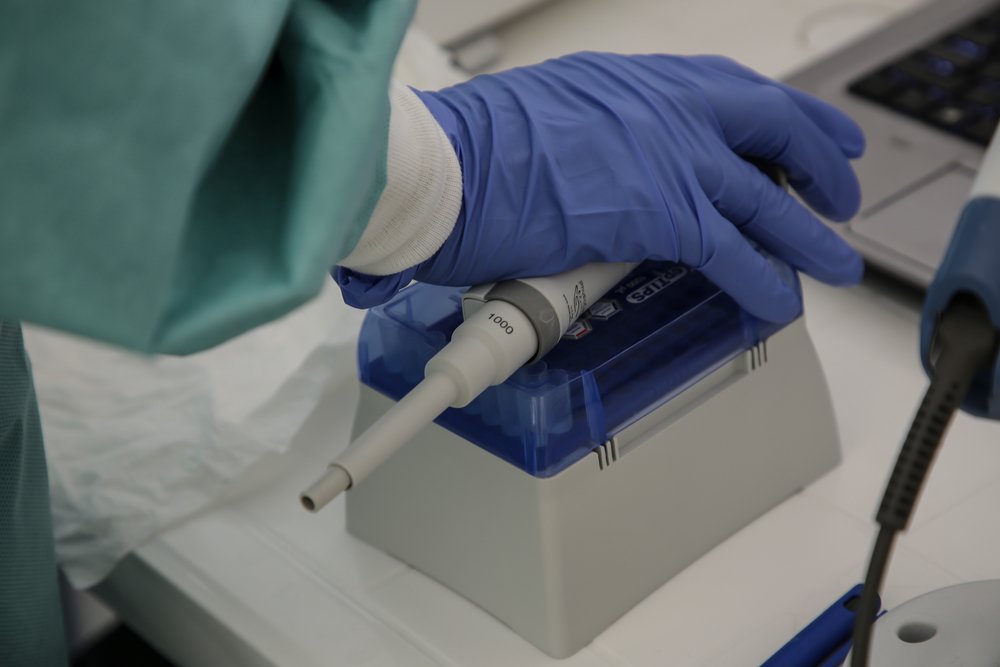 Carl Theunis/MSF
Close-up of the equipment to analyse blood samples in the low risk compartment of the Laboratory in an Ebola Treatment Centre (ETC).

“Community mistrust and resistance have often been pointed out as the major obstacles in the fight against Ebola. In reality, people would seek medical care at the onset of symptoms if we told them loud and clear that they can be cured with treatments recently proven[3] to greatly increase their chances of survival” says Dr Natalie Roberts, MSF Emergency Coordinator. “They would also come to be vaccinated in greater numbers if more people were aware they can be protected from the virus by a vaccine proven to be highly effective against Ebola[4]. We need to stop blaming communities for their own deaths and make sure more people have access to treatments and vaccines.”

MSF’s efforts to expand access to vaccination, in collaboration with the Ministry of Health and according to the recommendations of the Strategic Advisory Group of Experts (SAGE)[5] in May 2019, have been frustrated by the tight controls on supply and eligibility criteria imposed by WHO. MSF vaccination teams have often been forced to remain on standby in North Kivu, waiting to receive a handful of doses reserved to people on a pre-defined list.

“Time is of the essence in an outbreak: medical teams should be able to rapidly provide treatments or vaccines based on what they see on the ground” says Dr Roberts. “If a mother has been caring for her sick child who is then diagnosed with Ebola, not only do we want to diagnose and treat the child, but also we also want to provide the mother with post-exposure prophylaxis that could potentially prevent her from developing the disease, and vaccinate her whole community so that if she does get sick, they will have already developed immunity. But our capacity to carry out real-time assessments and react accordingly is severely undermined by a rigid system which is hard to comprehend. It’s like giving firefighters a bucket of water to put out a fire, but only allowing them to use one cup of water a day. Every day we see known contacts of confirmed Ebola patients who have not received their dose despite being eligible for vaccination”.

Such restrictions seem unjustified: rVSV-ZEBOV vaccine has demonstrated a good safety profile and a high level of protection against the virus in a Phase-3 clinical trial in Guinea in 2015. In the absence of regulatory approval, the Congolese Ministry of Health and WHO allowed the vaccine to be used under an ‘Expanded Access’ framework. Merck recently stated that in addition to the 245,000 doses already delivered to WHO, they are ready to ship another 190,000 doses if required and that 650,000 additional doses will be available over the next 6-18 months.

“To allow for the best possible use of experimental tools in an outbreak context, transparency is key” continues Dr Roberts. “How can we support the Congolese authorities in using these tools, how can we expect the Congolese people to trust a system that is not even transparent to front-line health workers like MSF?”

Médecins Sans Frontières calls for the urgent creation of an independent, international coordination committee, based on the model of the International Coordination Group created in 1997 composed of MSF, the International Federation of Red Cross, UNICEF and WHO, which proved successful in managing massive meningitis, cholera and yellow fever outbreaks with limited vaccine supplies. The committee would bring partners together to improve coordination on vaccination, increase transparency in stock management, share data, foster an open dialogue with the manufacturers and ultimately ensure that the vaccine is provided to all those most at risk of being exposed to the virus.

MSF has been active in the Ebola intervention in north-eastern DRC since its declaration on 1 August 2018. MSF teams have been involved in several activities including provision of care to confirmed and suspect Ebola patients, vaccination of frontline workers, strengthening of infection prevention and control measures and community outreach. They have also been working with numerous health facilities in North Kivu and Ituri in order to support access to general healthcare for the population during the Ebola epidemic.

[3] In August 2019, the independent Data and Safety Monitoring Board (DSMB) for the trial of four investigational agents for the treatment of Ebola virus disease recommended that the study be stopped and that all future patients be randomized to receive either REGN-EB3 or mAb114, because preliminary results indicated that those two products provided a greater chance of survival than the other two.

[4] rVSV-ZEBOV vaccine has been shown to be safe and highly effective against the Zaire strain of the Ebola virus following a “Phase III” clinical trial in Guinea, during the 2014-2016 outbreak. This vaccine was recommended by the Strategic Advisory Group of Experts on Immunization (SAGE) for use in Ebola outbreaks caused by the Zaire strain of the virus.

[5] SAGE is the principal advisory group for WHO for vaccines established in 1999.