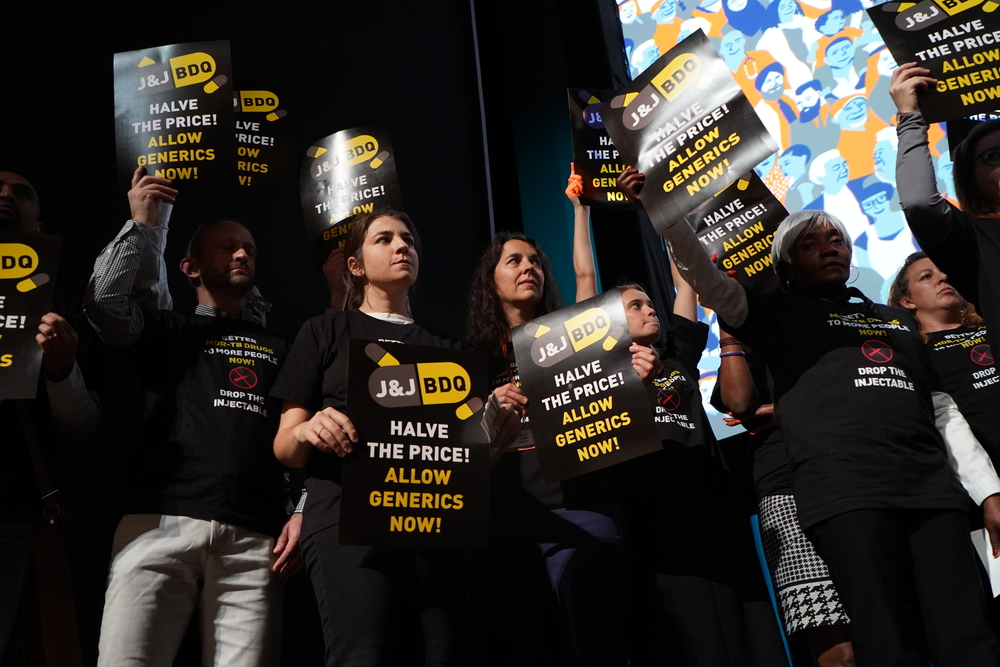 MSF: Johnson & Johnson Should Make TB Drug Available for All at $1/Day

MSF protests at J&J’s annual shareholders meeting to demand a say in how lifesaving tuberculosis drug developed with considerable joint efforts, including public funding and MSF operational research, will be made available and affordable.

At the Johnson & Johnson annual shareholders meeting today, the international medical humanitarian organisation Médecins Sans Frontières (MSF) demanded that the corporation reduce the price of the tuberculosis (TB) drug bedaquiline to US$1 per day to reflect the joint research efforts made to bring this drug to patients. While MSF recognises J&J’s significant efforts to develop this effective drug, the corporation should take urgent steps to make it affordable and accessible for all people who need it.

Bedaquiline, which replaces older, more toxic TB treatments, was developed with considerable taxpayer, non-profit and philanthropic support. Operational research carried out by MSF and others was key in generating evidence of bedaquiline’s effectiveness against drug-resistant forms of TB. Additional clinical trials, by MSF and others, are underway that could further inform treatment options containing the drug. Despite these joint efforts, J&J sets the price for bedaquiline at its own discretion, effectively deciding who can have access. People who can’t access the drug are forced to endure older, toxic treatments, including painful daily injections, that can cause devastating side effects such as permanent deafness and psychosis.

“J&J did not develop this important drug alone, and those who contributed to its development should have a say in how bedaquiline is made accessible at an affordable price for people who need it to stay alive and healthy,” said Dr Els Torreele, Executive Director of MSF’s Access Campaign. “We welcome J&J’s contributions in developing this new and more effective drug, but we can’t rely on company charity programmes to deliver the drugs we need to address global pandemics. For the development of bedaquiline, much of the critical work to demonstrate its therapeutic value was done by the TB community of researchers, ministries of health, and treatment providers, and financed by the public. These contributions must be recognised.”

J&J currently sells bedaquiline for $400 per six-month treatment course to countries eligible to buy the drug through the Global Drug Facility, a TB drug and diagnostic procurement mechanism that is part of Stop TB Partnership, operating out of a UN agency. J&J has not disclosed prices for the drug in other countries. Bedaquiline is just one of four or more medicines needed to compose a treatment regimen for drug-resistant TB (DR-TB), and most people require the drug for longer than the marketed duration of six months. As of November 2018, only 28,700 people had received bedaquiline worldwide since it was approved for use in 2012, which is less than 20% of those who could have benefitted from it. In 2019, the World Health Organisation (WHO) issued guidelines recommending bedaquiline as a core drug in the treatment of multidrug-resistant TB, thereby more than tripling the number of people who need it each year.

A coalition of groups including MSF has been engaging with J&J regarding the high price of bedaquiline since early 2014 and last year demanded at the TB Union Conference in the Netherlands that J&J lower the price of the drug to $1 per day. Researchers from the University of Liverpool have calculated that bedaquiline could be produced and sold at a profit for much less – as little as 25 cents per day if at least 108,000 treatment courses are sold per year. At $1 per day, the price would be $600 per person for the 20 months of treatment that many DR-TB patients require.

Bedaquiline was the first DR-TB drug to be developed in more than 40 years, and its development benefitted from considerable public investment. Evidence for the drug’s potential to improve cure rates with fewer side-effects was also the result of joint efforts by the global TB research and treatment provider community. It is therefore unacceptable that J&J alone decides who can have access to the drug and at what price. Contributions to building the evidence base for the therapeutic value of bedaquiline have come from US taxpayers, through agencies such as the National Institutes of Health, health ministries in countries with high rates of TB, the South African Medical Research Council, academic institutions, non-governmental organisations like MSF, and a host of philanthropic donors.

“It’s not complicated: drugs like bedaquiline that are created and developed together with the global TB community and using public money should be available to people who need them at the lowest possible price,” said Sharonann Lynch, HIV & TB Policy Advisor for MSF’s Access Campaign. “Considering the substantial public money that went into creating this TB drug, J&J needs to agree to sell it for no more than $1 per day. The public has already paid for this drug; it’s time the public has affordable access to it.”

After repeated public calls to J&J to recognise this joint effort and price this medicine more affordably, MSF sent a letter to the corporation in September 2018 to argue the case, but has yet to receive a response. 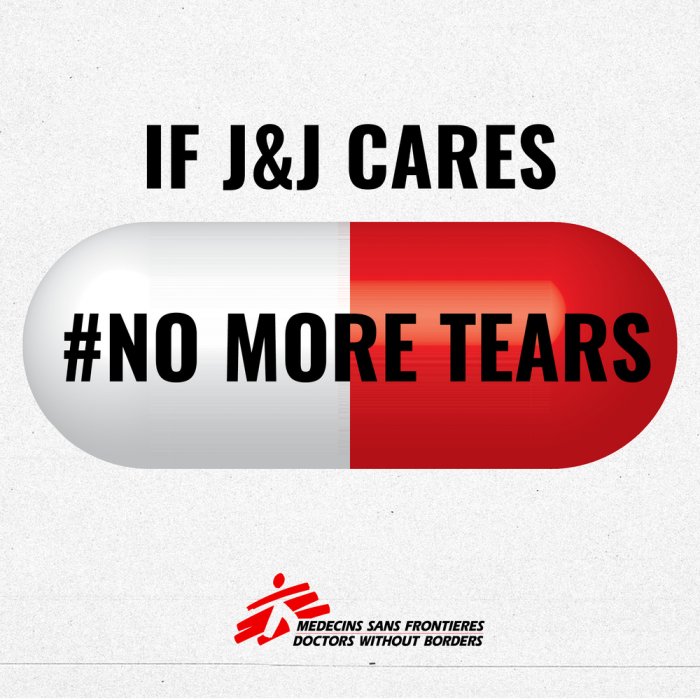 WHO recently recommended bedaquiline as a core part of an all-oral treatment regimen for DR-TB, and relegated drugs that must be injected and cause serious side effects to last-resort options only. Implementation of WHO’s recommendations will dramatically increase the number of people who should receive bedaquiline, but the rapid uptake of this better-tolerated treatment will happen only if J&J makes it widely available in an affordable way, including by allowing other TB drug manufacturers to make generic versions.

While J&J claims that their price is not a barrier to access, the corporation is working tirelessly to retain and extend the monopoly it currently holds on the drug – and to retain control over the price they can charge in each country. J&J is seeking to ‘evergreen’ its monopoly in countries such as India by filing additional, often questionable patents, which is a tactic commonly used by corporations to extend monopolies on their drugs beyond the standard 20 years. In this way, J&J aims to further delay the availability of alternative sources of this critical drug in countries with high rates of DR-TB, including India and South Africa.

J&J’s bedaquiline donation programme is another means by which the corporation has worked to retain decision-making power over who gets treated and where, rather than working collectively with the global health actors and the TB community that made development of bedaquiline possible. J&J announced its drug donation programme in response to public pressure to lower the price of this drug, but global health experts and WHO recommend against donation initiatives, which can undermine long-term efforts to increase access to affordable medicines. J&J’s bedaquiline donation programme has since ended, save for specific country announcements made by J&J, such as in India, where the corporation’s attempt to extend its patent monopoly is being challenged in the court system.

“J&J highlights its work on global health, its investment in developing this drug and its donation of bedaquiline to countries such as India,” said Lynch. “Yet, there is still no transparency on their actual R&D expenditures and the financial benefits obtained through tax breaks and other incentives. We are not looking for charity from Johnson & Johnson. Given the joint effort and public investment that went into developing this drug, they should not decide on its price and availability alone. Bedaquiline is a gamechanger in fighting TB, the world’s deadliest infectious disease. But what good is a lifesaving drug if the people who need it most can’t get it?"

Medical research and development to address people’s health needs wherever they live must be fostered as a collective responsibility, a transparent social contract between public and private sectors in which knowledge generated is shared, not privatised,” said Torreele. “Medical research must deliver public health tools that are available to all who need them, not luxury commodities. We invite J&J and other pharmaceutical companies to engage on those terms in pursuing research and development in the public interest, and bedaquiline could be a case-in-point to build from.”

MSF is the largest non-governmental provider of TB treatment worldwide and has been involved in TB care for 30 years, often working alongside national health authorities to treat people in a wide variety of settings, including chronic conflict zones, urban slums, prisons, refugee camps, and rural areas. As of September 2018, across MSF projects in 14 countries, more than 2,000 people have been treated with the newer drugs, including 633 with delamanid—the only other new TB drug developed in more than 40 years—1,530 with bedaquiline, and 227 with a combination of both medicines. Safety and efficacy data on the use of bedaquiline in MSF programs continues to contribute to the evidence base informing the use of bedaquiline in the treatment of drug resistant TB. Additionally, MSF is conducting two phase II/III clinical trials involving the use of bedaquiline: endTB and TB PRACTECAL.