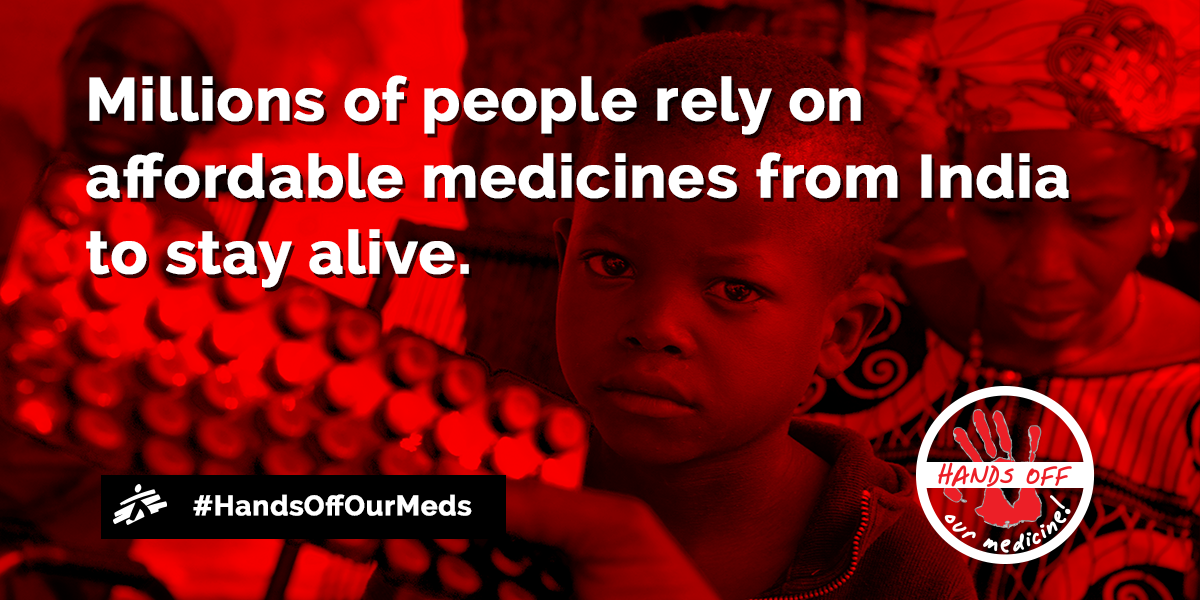 Médecins Sans Frontières/Doctors Without Borders (MSF) today launched a global campaign urging Indian Prime Minister Narendra Modi to stand strong in the face of intensifying pressure from the United States, Japan, Switzerland and the European Union to change India’s laws and policies in ways that would severely restrict the country’s ability to produce affordable medicines, upon which millions of people around the world rely.

MSF launched the campaign as the eighth round of negotiations for the RCEP (Regional Comprehensive Economic Partnership) trade agreement were taking place in Kyoto, Japan, which contains harmful proposals that would undermine access to medicines.

Medicines too expensive for developed countries

More than 80% of the medicines MSF uses to treat over 200,000 people living with HIV in its projects are Indian generics, and MSF sources essential medicines from India to treat other diseases, including tuberculosis and malaria. India also produces affordable versions of medicines for non-communicable diseases, now considered too expensive even for healthcare systems in developed countries.

“As doctors who have been relying on affordable medicines and vaccines made in India to do our work, we cannot afford to stand by silently as the tap of life-saving drugs gets turned off for people in our projects and beyond”, said Dr Joanne Liu, International President of MSF. “We want to send India a strong message of support as the world is watching anxiously to make sure it remains the ‘pharmacy of the developing world.”

India’s law sets the bar higher than other countries for what does and does not deserve a patent, in the interest of public health. This has allowed the robust generic competition to continue that has, for example, resulted in the price of a basic HIV treatment combination dropping by 99% over the course of a decade, from over $10,000 to around $100.

Through the RCEP negotiations, Japan is seeking to put in place several damaging provisions, all of which go beyond India’s obligations under international trade rules. They would allow companies to perpetually extend their monopolies by making modifications to existing medicines, a common pharmaceutical industry practice known as ‘evergreening.’

Further measures would allow companies to get a de-facto monopoly through the backdoor—even for drugs that do not merit a patent under India’s law—by restricting the ability of the drug regulatory authority to register generic drugs, unless expensive and unethical clinical trials are replicated, so-called ‘data exclusivity.’

Bilateral trade agreements under negotiation with the EU and European Free Trade Association (EFTA) —which also contained harmful provisions for access to medicines—had been stalled for years following intense push back from Indian negotiators and civil society, but talks are rumoured to be starting again soon.

The US government, backed strongly by its pharmaceutical lobby, is not only pressuring India to dilute its patentability standards but has been persistently pushing India to implement a drug regulatory system which essentially links registration of medicines to their patent status (patent linkage), and the Indian Ministry of Health appears to be seriously considering such changes.

“We have been working tirelessly for a decade and a half to make sure India can continue to be a lifeline for millions of people around the world who rely on affordable medicines to stay alive and healthy”, said Leena Menghaney, South Asia Director for MSF’s Access Campaign. “We shudder at the thought that we could lose everything and the multinational pharmaceutical industry could succeed in gutting generic competition from India so that profit reigns above people’s lives.”

In 2006, Swiss pharmaceutical company Novartis notoriously took the Indian government to court in an effort to change the country’s patent law, after the company was denied a patent on a cancer drug. The company lost its challenge in India’s Supreme Court seven years later, in a landmark ruling in April 2013. Nevertheless, the US, EU, Switzerland and now Japan are renewing efforts to push back against India’s laws and policies that make full use of public health flexibilities in international trade rules to increase access to affordable generic medicines.