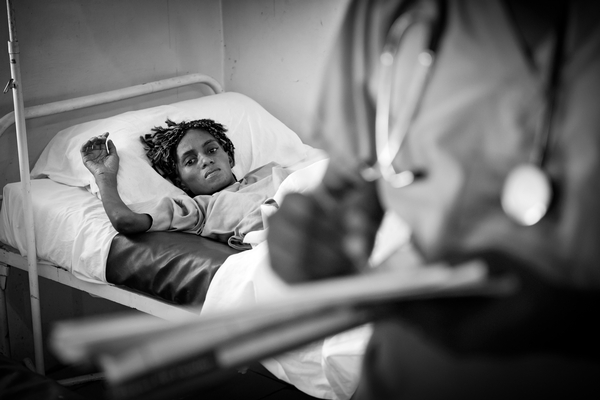 "In countries where we work, like Uganda, Mozambique, Zimbabwe, Myanmar or DRC, people affected by HIV, TB and malaria rely on international support to get the treatment they need to stay alive.

Because of waning political commitment, the Global Fund cancelled the funding round in 2011 and states it doesn't have the resources to make new grants for treatment for the next two years, which will have devastating consequences on the progress achieved in fighting the three epidemics over the last decade.

Democratic Republic of Congo 2011 © Mario Travaini MSF
Sefi, 32 years old, a patient at Centre Hospitalier de Kabinda (CHK) in Kinshasa. Democratic Republic of Congo 2011 © Mario Travaini MSF
Now that new scientific evidence shows that HIV treatment itself could be the one of the best ways to turn the epidemic around, it's time for governments to roll up their sleeves and commit to getting the Global Fund back on track. It’s the main financing instrument to provide treatment to millions of people waiting for antiretroviral medicines.

As the Global Fund turns the page with its leadership changes, it needs to stick to its core values of getting the best and most affordable treatment to as many people as possible as quickly as possible.  First on the to-do list should be holding an emergency donor conference so that affected countries can apply for new grants and expand life-saving treatment this year.

On top of voluntary funding, we also need predictable mechanisms - such as the financial transaction tax currently being debated in Europe - with part of funds generated to be dedicated to global health, including the Global Fund."