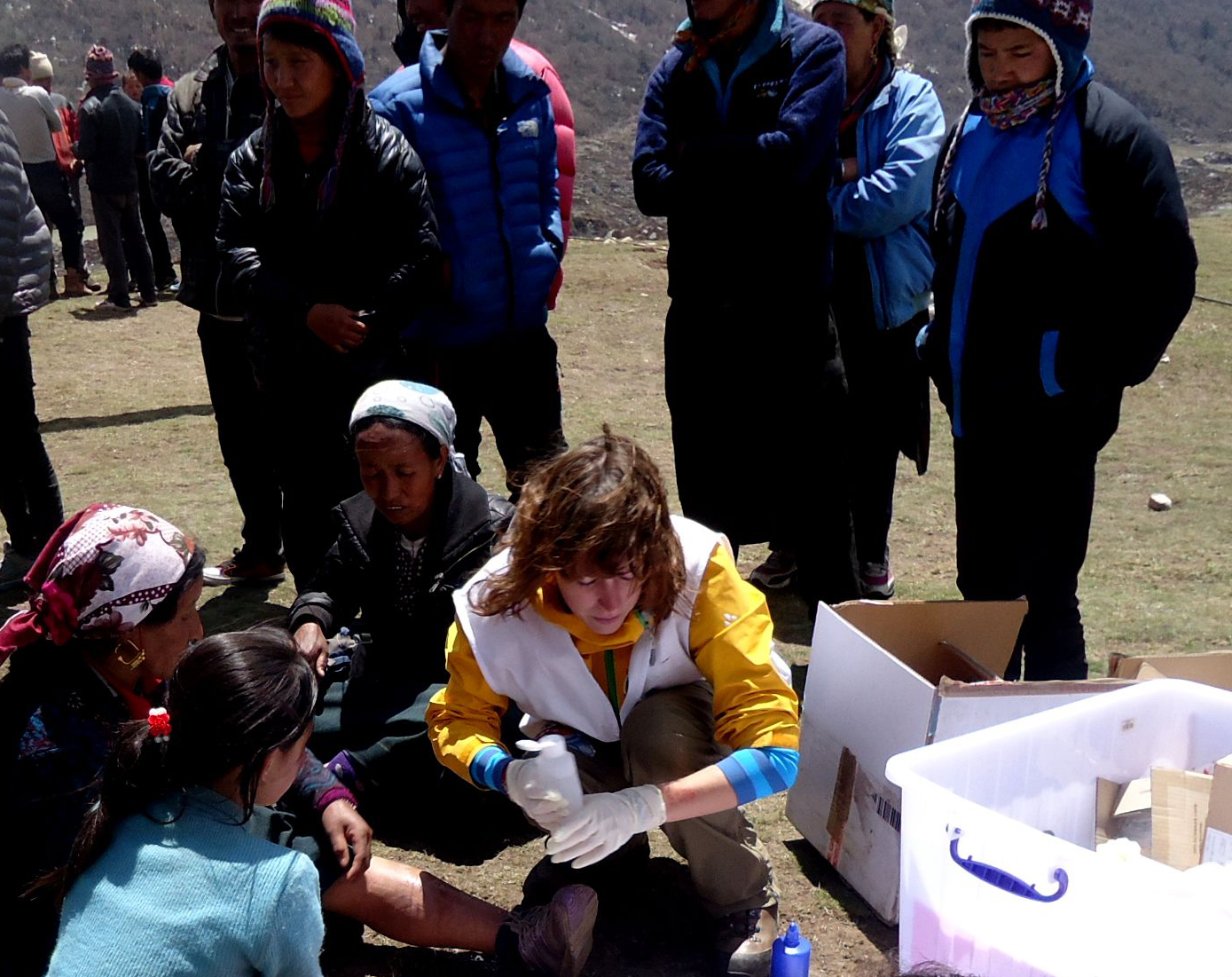 Anne Kluijtmans, an MSF nurse from Holland, was on holiday in Nepal when the earthquake struck on Saturday 25 April. She quickly joined the MSF teams who had arrived in the country to respond.

“I was in Lumbini, near the Indian border, when the earthquake hit. I felt like we were on a rocking boat. We asked people what was happening as we thought this was just a tremor. A few hours later we found out that it was a big earthquake, so I tried to find out whether MSF was coming.

I called the MSF office in India and was advised by one of their staff to quickly move to Kathmandu as the teams would be coming there.

Joining the team in Kathmandu

After a day and half struggle to find a plane that would fly me out of Lumbini, I joined the team in Kathmandu and now I’m helping run mobile clinics via helicopter, trying to reach people in remote areas who have not received any assistance yet.

On the first day of the clinic we got up at 4 am, having already packed all our supplies the night before, and went to the airport. We had to wait because it was raining and we were unsure whether we would be able to fly. We managed to take off a few hours later and headed up into the mountains.

When I had arrived in Kathmandu I thought it would be completely flat. It is bad, but what I saw in the remote areas is much worse. When you get up in the air you see how devastated these areas are.

Some villages are 80-100 percent destroyed. It was beyond my expectations.

Jean Pletinckx/MSF
MSF's teams are seeing people in need of basic healthcare, as well as a number of people presenting with wounds sustained in the earthquake that have now become infected.

We went first to Langtang National Park and flew over the main village. It was completely buried under an avalanche. People fled further up the mountain to the village of Kyanjin Gumba, which is at an altitude of around 3,800 metres and gets very cold at night.

The village is around 70 percent destroyed. They told us that more than 30 children have been orphaned.

Their parents died not in the initial earthquake, but were buried by the avalanche that came the next day. They didn’t see it coming; they thought everything was ok and then this happened.

The most severely injured people were already evacuated, but the others who remained hadn’t received any healthcare. There were people with skin infections and small children with deep cuts.

We did some dressings and found many people with infected wounds. We even saw some wounds that already had worms in them. We had to give out a lot of antibiotics so that the wounds don’t become septic, which could cause more deaths.

Jean Pletinckx/MSF
While the most critically injured people were evacuated in the days immediately after the earthquake, those remaining have been trapped in their villages as roads and walking tracks have been cut off by avalanches and landslides.

In Dozum village in Sindupalchowk district, I found an 85-year-old man who had been trapped under the rubble of his house, which was completely destroyed. His son was taking care of him and we checked that he was stable and gave him medication.

It was very tough before touching down each time, but I knew that people wouldn’t benefit from me being upset.

So I tried not to show my emotions and let them show theirs. I’m in emergency mode right now and am only concerned about trying to reach people.

People are very scared that there will be another earthquake or landslide, or that they will run out of food. In Kyanjin Gumba village, there were people who were obviously traumatised and couldn’t talk to us. They just looked right through us.

But there was also a woman who had started cooking for everyone. So people are coping in different ways. They’re very much in survival mode and mental healthcare is going to be crucial.

When the earthquake happened, my family and friends were of course worried about whether I was safe. When I said I was going to Kathmandu to help, they initially said I was crazy, but they also know that I’m a nurse and working with MSF.

If you’re in the country when something like this happens, you have to help. I have a lot of support from them and especially from the team.