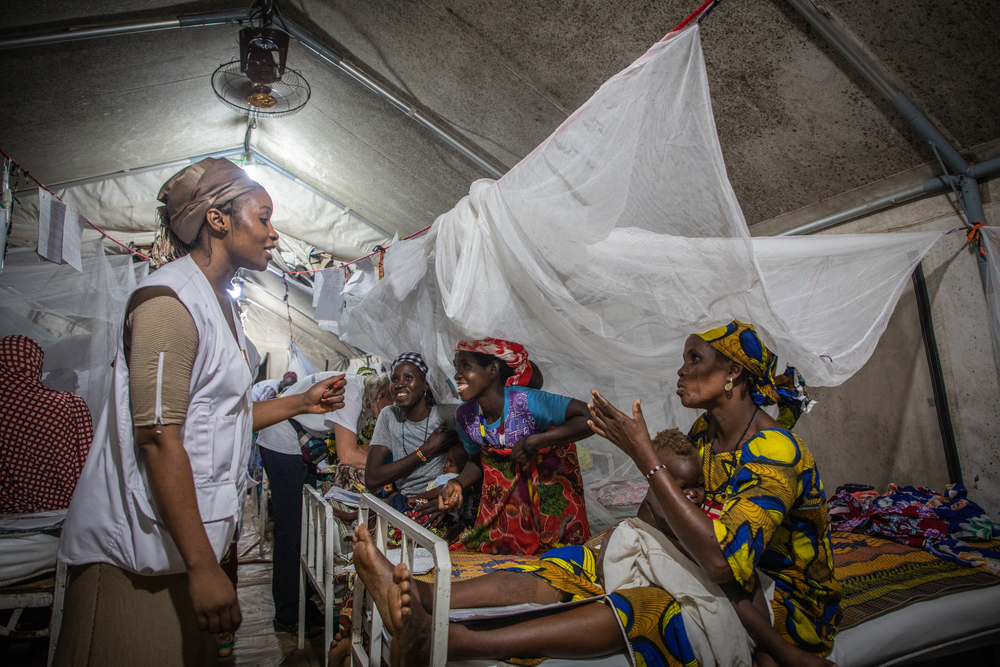 Niger: 15 years treating malnutrition and malaria around the clock

Every year, the combination of ‘hunger gap’ and rainy season trigger a spike in rates of malnutrition and malaria in southern Niger – particularly from July to October. Since the large-scale food crisis of 2005, the prevention and treatment of childhood diseases has greatly advanced: from ready-to-use therapeutic meals to more decentralised, comprehensive, patient-centred approaches. Hundreds of thousands of children continue to be affected by this chronic emergency though, and need timely, free-of-charge, good quality healthcare, especially during the seasonal peak.

When three-year-old Mohammed Sani arrived at the Magaria district hospital in Zinder region, he could barely open his eyes due to oedemas. He was suffering from kwashiorkor, a form of severe acute malnutrition characterised by a swollen face and limbs. Without treatment, complications are frequent and potentially life-threatening, with high mortality rates. Mohammed Sani was cared for by the Doctors Without Borders/Médecins Sans Frontières (MSF) team and recovered. Just before being healthy enough to leave, he was feeding himself, looking around with curiosity and defiance. After he was discharged, his treatment was home-based; his mother would need to give him sachets of ready-to-use food, and bring him to their closest nutritional centre every week for check-ups. 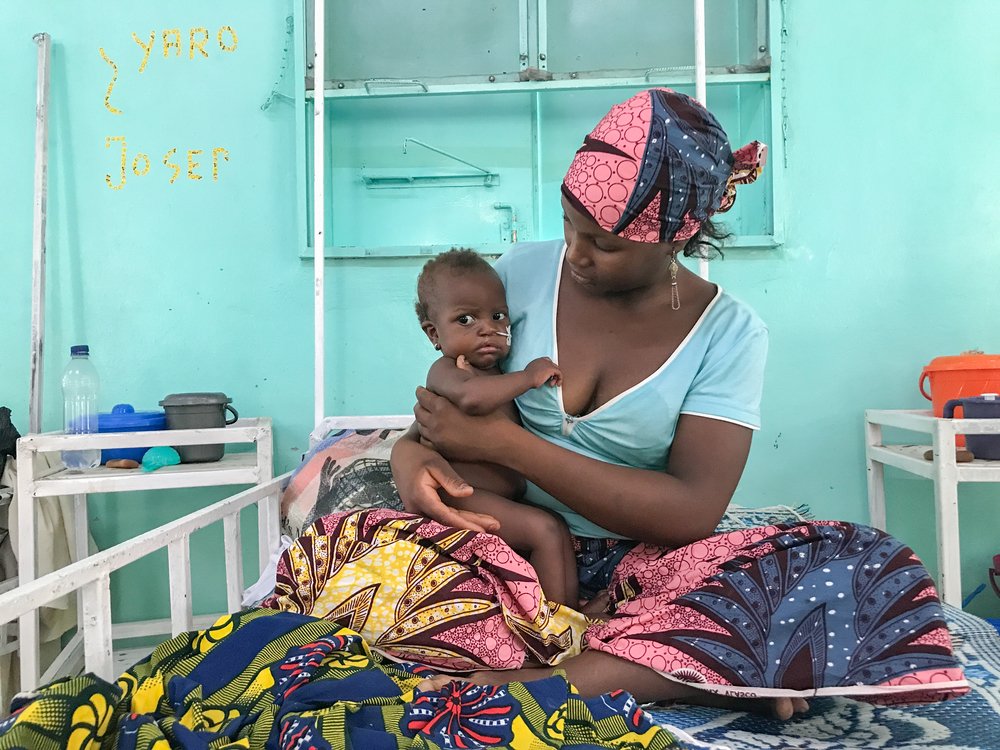 MSF/Ainhoa Larrea
6. Hospitals with qualified staff, and adequate medicines, equipment and infrastructure play a key role in the fight against potentially lethal diseases. From January to September 2019, MSF treated 10 800 children in the District Hospital of Magaria, in the region of Zinder.

For the last 15 years, international medical humanitarian organisation MSF has been working with the Ministry of Public Health to offer children like Mohammed Sani the best possible treatments. The first historical milestone for this partnership was the ready-to-use therapeutic food (RUTF), introduced in 2005, which was followed by other successful innovations.

JULY 2005. Widespread poverty and structural issues, compounded by drought and locusts, resulted in a large-scale food crisis. The nutritional situation became critical and radical measures had to be taken. A national protocol introducing RUTF was approved, which led to a massive expansion of ambulatory treatment for children with severe acute malnutrition. Nearly 70,000 children were treated across the country in 2005; 60 per cent of them with support from MSF teams.

FAST-FORWARD TO 2019. Hospitals with qualified staff, and adequate medicines, equipment and infrastructure play a key role in the fight against potentially lethal diseases. But for a lot of Nigeriens they remain the option of last resort. Many of the children admitted to hospital emergency rooms are brought there when their conditions have already drastically worsened and they are at further risk of death or lasting negative effects. The distance from rural communities to the hospitals, the cost of transport and other socio-cultural factors such as resorting to traditional healers first are often behind these late arrivals. 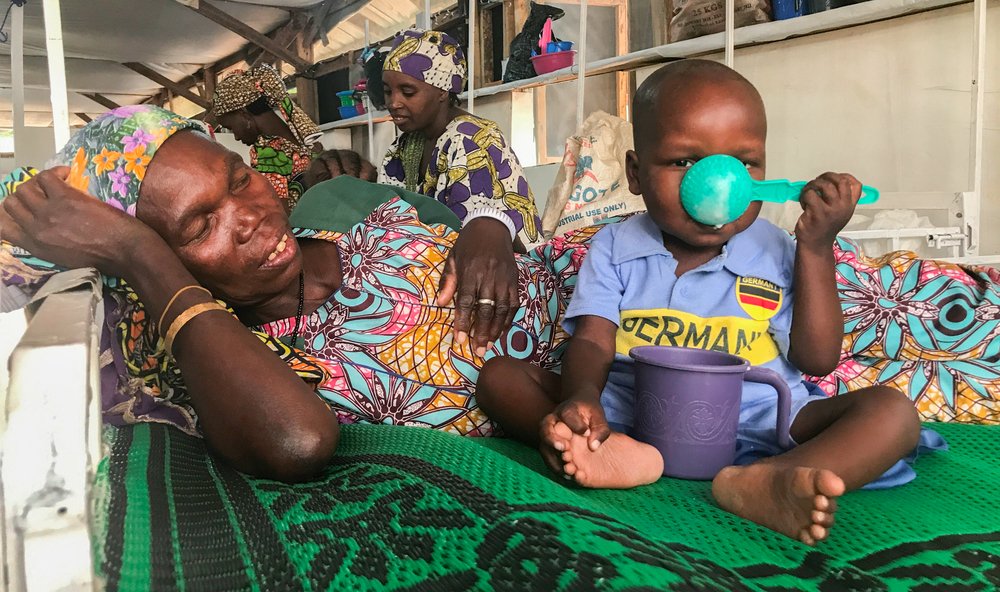 MSF/Ainhoa Larrea
When three-year old Mohammed Sani arrived at the Magaria District Hospital of Zinder region, he could barely open his eyes due to oedemas. He was suffering from Kwashiorkor, a form of severe acute malnutrition characterised by a swollen face and limbs.

Mohammed Sani is one of the more than 300,000 children treated by MSF in Niger, in partnership with the Ministry of Public Health, between January and October 2019. As in other countries in the Sahel region, the main causes of death for children under five years old in Niger are malaria, respiratory tract infections and diarrhoeas. Yet, it is estimated that malnutrition is an underlying contributing factor in nearly half of such deaths – and can severely hamper development among those that survive.

In 2018, the Government of Niger registered over 2.75 million cases of malaria, mostly during the seasonal peak between July and October, with 3,331 of these proving fatal. Children under the age of five were the worst affected, accounting for half of the deaths. A country-wide survey conducted by national authorities in October and November 2018 revealed that prevalence of severe acute malnutrition reached a worrying level, 3.2 per cent, when the emergency threshold is 2 per cent.

According to MSF Medical Coordinator in Niger, Rilia Bazil, “the good news is that we know the medical solutions to improve this situation. Nigerien healthcare has taken a number of positive steps since from the introduction of ready-to-use therapeutic food. This includes more inclusive criteria to define malnutrition; progress on child feeding practices; home-based screening of potentially malnourished children measured using the innovative Mid-Upper Arm Circumference (MUAC) tape; simple, rapid diagnostic tests for malaria; seasonal malaria chemoprevention; and improvements to ambulatory and facility-based treatments.” Ultimately, an increased public health approach, with a strong community-based component, is helping reduce the prevalence and rates of mortality linked to malaria and malnutrition. 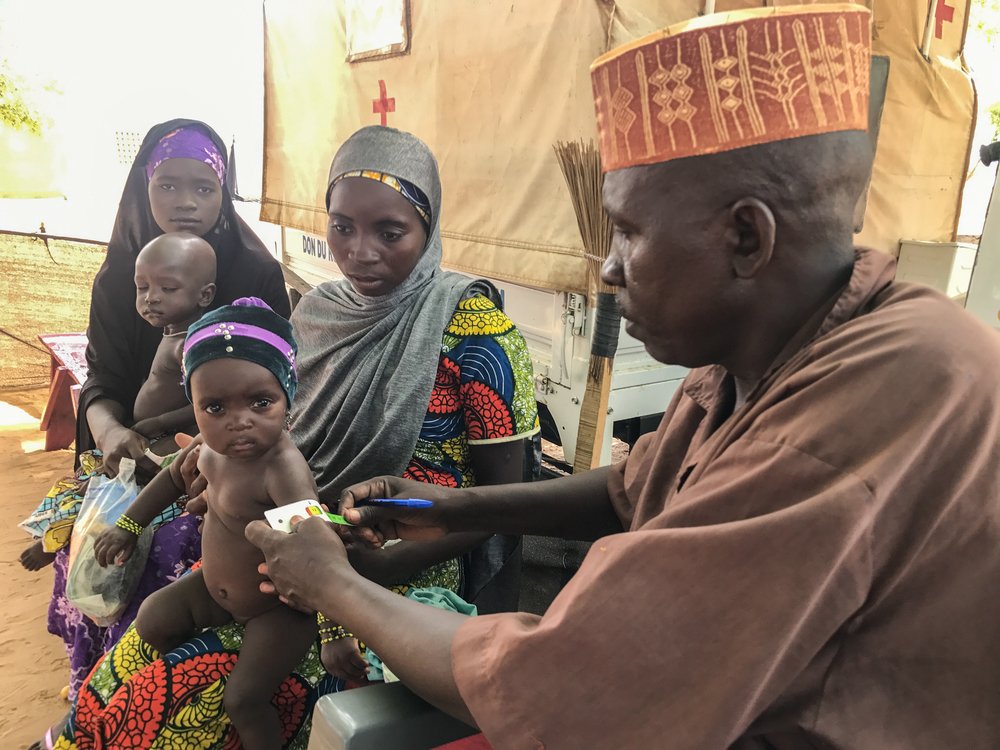 MSF/Ainhoa Larrea
Every child visiting the health centre of Tinkim is screened for malnutrition at the triage area. To that end, our team members use red, yellow and green tapes that measure the Mid-Upper Arm Circumference (MUAC) and help determine the status of the patient. This system is now also being used at the community level, even by parents themselves.

In Niger, health promotion and the national programme for integrated community-based case management of childhood illnesses (iCCM) have become crucial instruments to deal with childhood diseases, especially in rural areas. The iCCM establishes a network of community health workers chosen by their own communities, who are trained and equipped to diagnose and treat non-complicated diseases, thereby improving the chances of survival and full recovery of patients.

A big tree, a tent or a small hut can play a key role once they are designated as ‘mini health facilities’ and run by such personnel. They represent the first staging post for sick children, providing immediate diagnosis and treatment, or referring them to a health centre, saving more lives in the process. In the Magaria district of Zinder and the Madarounfa district of Maradi, for example, 172 community health workers conducted 39,015 consultations between July and September 2019.

“Prevention saves lives, as does bringing adequate treatment options closer to people in need. Childhood diseases need to be tacked in a multidisciplinary way. To that end, at the medical level it is imperative to ensure that the most vulnerable girls and boys have timely access to free-of-charge, good quality healthcare, whether in their own communities for simple conditions or at health facilities for complicated cases,” says MSF Head of Mission in Niger, Dalil Mahamat Adji. “We need to hope for the best, but always plan for the worst, upscaling our support to prevent suffering and deaths linked to malaria and malnutrition.” 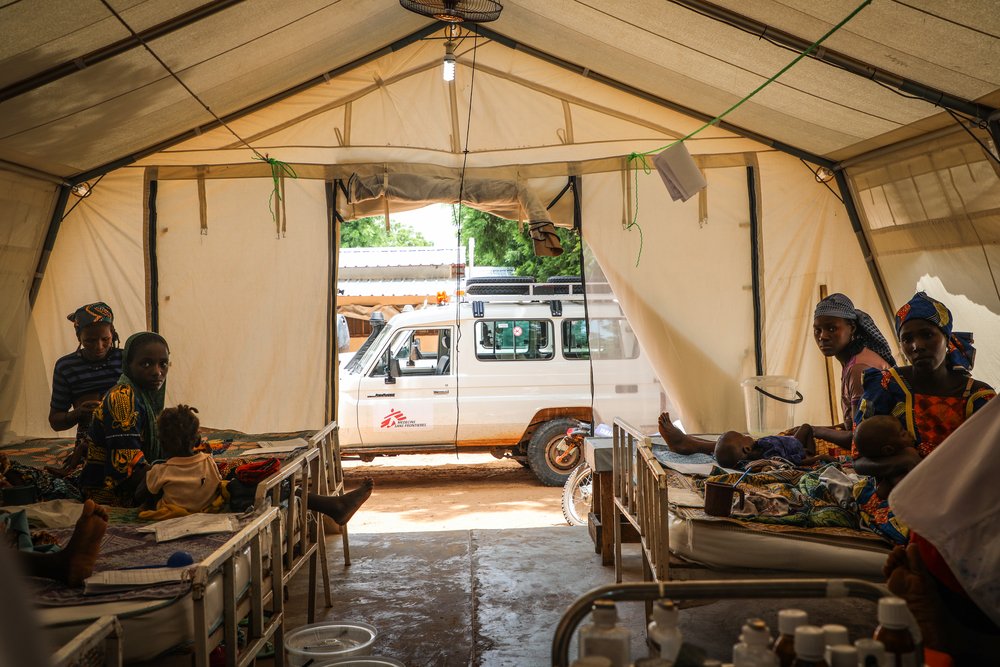 Ahead of the seasonal peak of malaria and malnutrition that typically runs during the second half of the year, MSF doubled or tripled its hospitalisation capacity in the most affected regions, and strengthened community-based prevention and treatment of childhood diseases. These include a wide-range of activities including awareness-raising on health and hygiene issues, community-based initiatives, support for seasonal malaria chemoprevention, and vaccination campaigns to improve children’s protection against diseases than can damage their immune systems.

Reducing the prevalence and mortality of childhood diseases is a shared responsibility which demands continuous efforts by stakeholders in the health sector and from those involved with food security, education and livelihoods in the most vulnerable regions. In a situation with other humanitarian needs on the rise because of conflict and insecurity, it is of utmost importance to keep working so that malaria and malnutrition don’t claim lives and all children can grow up in good health.

MSF first began working in Niger in 1985. Guided by medical ethics and the humanitarian principles of neutrality and impartiality, we now run projects in Zinder, Maradi, Diffa, Tillabéry, Agadez and Tahoua regions, with over 1,660 year-round staff and an additional 360 employees during the seasonal malnutrition and malaria peak.

Our main objectives are to reduce child mortality, to improve the quality of paediatric and maternal care, to help survivors of violence and displacement, and to assist both people on the move and local communities. We also respond to disease outbreaks and support the Ministry of Public Health to improve immunisation coverage against illnesses such as cholera, measles and meningitis. In 2018, our teams treated more than 443,000 children affected by malaria, malnutrition and other illnesses.

In addition, Epicentre research centre has been conducting field studies and surveys in the country since 2005, to improve the overall response to nutritional crises and epidemics.

OUR WORK IN NIGER >