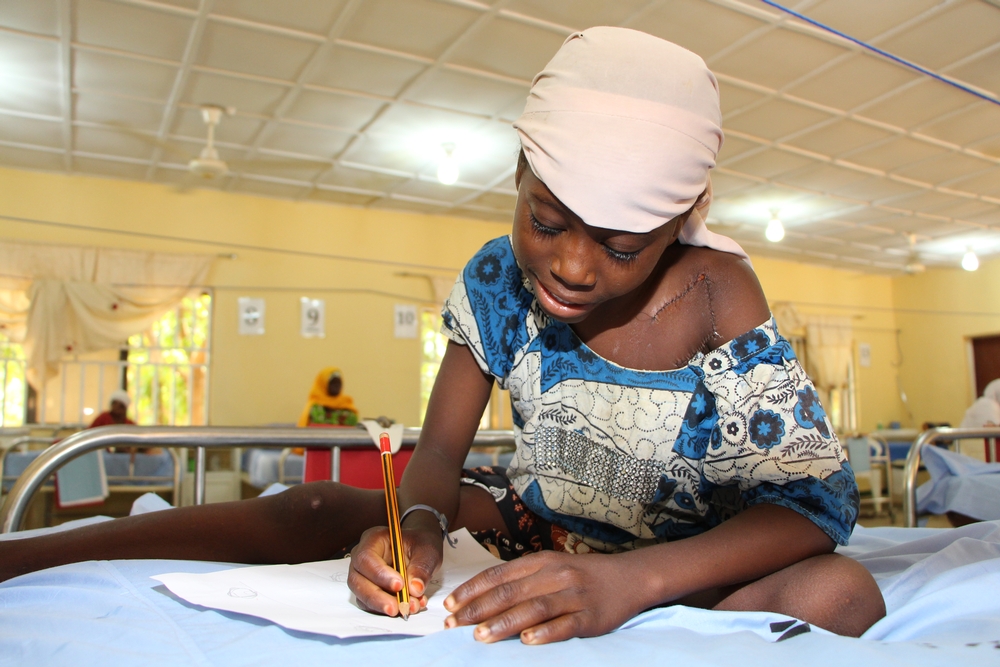 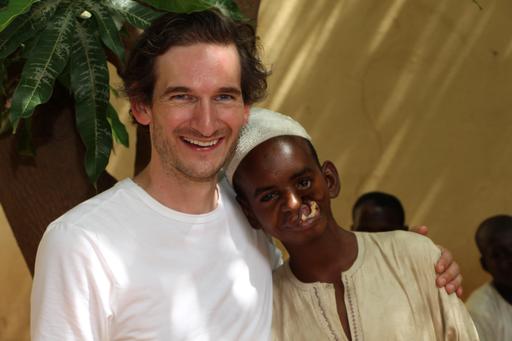 Noma is a disfiguring and deadly disease that kills thousands every year, but receives little public attention. The vast majority of sufferers are children under the age of six, who endure appalling facial disfigurement as a result of the disease.

“It can be very distressing for parents…”

"I’m a clinical psychologist and did my training with the NHS in South Wales.

My last job was in the secure unit of a prison, so quite a different environment to the one I’ve just come back from!

In Nigeria, I led the psychosocial unit, supporting patients and family members and helping them deal with the stigma around this disease.

Due to the nature of the disfigurement noma causes, patients suffer profound social and psychological effects.

Many children miss out on huge periods of schooling, and because of the way they look, they often cover up, hide themselves away, or are kept hidden by their parents. Helping a young person and their family overcome the emotional impact of the disfigurement is a core part of the counselling.

It’s hard to see children arrive like this. Because of the way they’re isolated at home, when they come to the hospital they’re really nervous. Over time, they socialise more and begin to come out of their shells, which is great to see.

We always make sure we are around for painful procedures such as dressing changes. We make sure that the children are distracted and that the parents are reassured, as it can be very distressing for parents to see their child upset or in pain.

“The operating theatre is a scary place…” 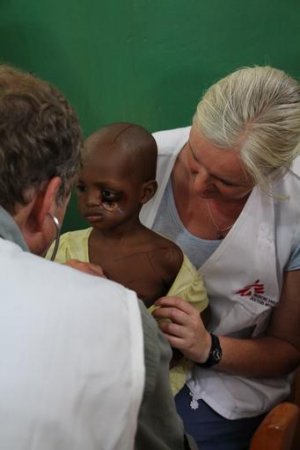 Adavize BAIYE/MSF
Story - A MSF surgical team holds a consultation with Zayyanu Murtala ahead of his surgery to reconstruct his face. In August 2015, MSF held a surgical intervention for 19 Noma patients at the Children's hospital in Sokoto State, in northwest Nigeria. Noma begins as an ulcer inside the mouth extending from within outwards, rapidly destroying the soft tissues and the bone. The disease is caused by poor oral hygiene which is exacerbated by severe malnutrition commonly associated with extreme poverty.
Many of the children are from remote villages, so the hospital is a completely alien environment.

The operating theatre is a scary place with lots of masked people, beeping machines, huge lights.

We tackle this by devising stories and activities to explain the procedures to both parents and children.

We have some masks and hats which the children can look at and try on.

We accompany children into the operating theatre, and their parents come too. And we make sure the parents are there when the child wakes up.

We spend a lot of time with families focusing on confidence building.

We talk about what the child is good at. What are their strengths? Coping strategies? What do they do well?

We try to get parents to reflect on that – with their children present – and build on those coping skills and the things they’re interested in, to empower the children to feel more confident so they can cope in the wider environment.

"We’ve been able to provide her with a place where she can learn, socialise with other children, and do what other children do"
tom hoareclinical psychologist

We use different strategies for different people. 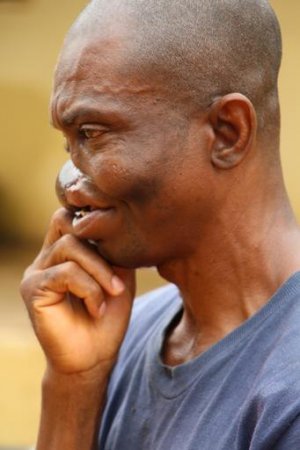 Adavize BAIYE/MSF
46- year old Okole Chukwumanige after his first surgery to reconstruct his face. In August 2015, MSF held a surgical intervention for 19 Noma patients at the in the northwest of the country. Noma begins as an ulcer inside the mouth extending from within outwards, rapidly destroying the soft tissues and the bone. Okole says, “I came to MSF for Noma surgery because I want to improve my looks and find work as a missionary.

There is one gentleman – an adult patient – who has been in the hospital for about two years, undergoing multiple rounds of surgery.

We tried to think of a way to give him a role in the hospital.

It turned out he really liked gardening, so we created a garden and gave him responsibility for it.

Now he’s growing lots of vegetables, which are being used in the kitchen, so he gets a feeling of satisfaction and he’s part of the team, rather than just someone who’s waiting to have surgery.

Lots of patients stick in my mind. There’s a girl there of six or seven who’s waiting for a set of surgeries.

When she first came in, she was tremendously disfigured down one half of her face, with almost her whole cheek missing.

She’s from an impoverished background and her parents had been taking her out begging on the streets.

She was very withdrawn and very scared about being in the hospital. But she’s had her first set of surgeries, and we’ve been able to provide her with a place where she can learn, socialise with other children, and do what other children do.

It’s really nice to see how much she has come on.

The kids with noma generally come from very impoverished backgrounds. The parents’ focus is on ‘how can we get money to survive?’ This has a huge effect on the children, because they’re kept at home and not encouraged to go to school or join in with any community activities.

You notice that many don’t meet their developmental milestones. A main focus of our assessments is to try and understand where the child is at in terms of their learning and their development – not just their cognitive abilities, but also their social abilities.

Sometimes you’ll have a 10-year-old behaving like a five-year-old – perhaps they don’t know how to share or how to play together – it’s very new for them to be surrounded by a lot of other kids. 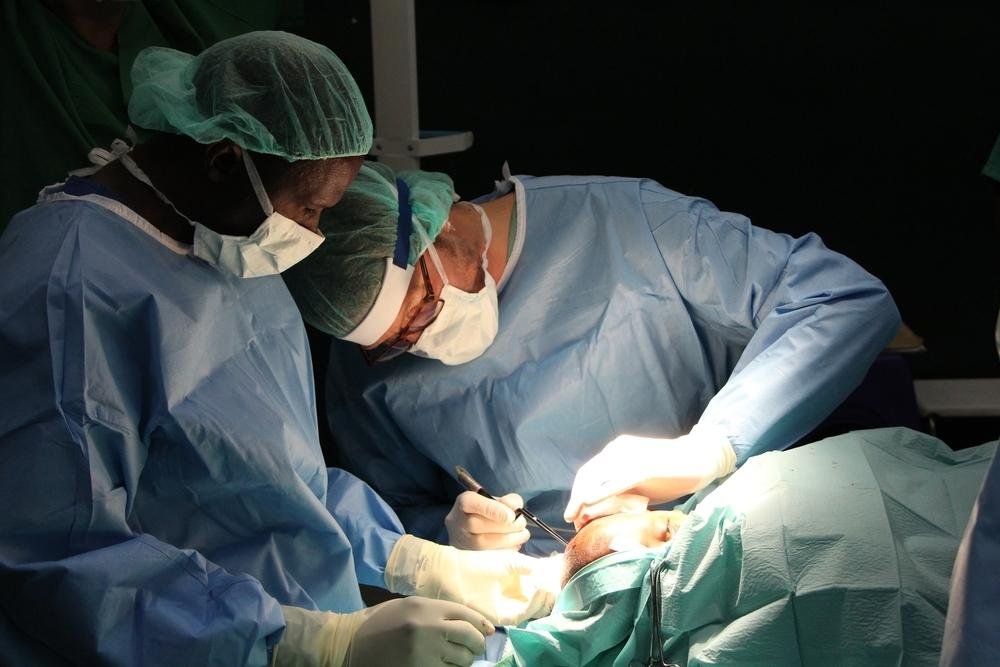 Adavize BAIYE/MSF
Story - MSF surgeons operate on 6-year old Zayyanu Murtala to reconstruct a hole in his jaw and damage to his eye, caused by Noma. In August 2015, MSF held a surgical intervention for 19 Noma patients at the Children's hospital in Sokoto State, in northwest Nigeria. Noma begins as an ulcer inside the mouth extending from within outwards, rapidly destroying the soft tissues and the bone. The disease is caused by poor oral hygiene which is exacerbated by severe malnutrition commonly associated with extreme poverty.

“A positive impact on recovery…”

And it’s had a positive impact on their recovery too. The surgeons and the medical team are really positive about it.

That said, I don’t think it’s always necessarily understood what we’re doing, but I think that if we stopped providing the support, that’s when people would notice it!”