People are facing a desperate situation in northern Syria, as limited access to clean water over the past few months has reached breaking point. A decade of war has left water and sanitation infrastructure destroyed and neglected, and today over three million people, mostly displaced by the conflict, are suffering dire consequences.

“Even when water is available and accessible to people in northern Syria, it is sometimes unsafe and contaminated,” says Ibrahim Mughlaj, MSF health promotion officer in northwest Syria.

“We are regularly confronted with the health impact of poor water quality, which often brings waterborne diseases and other health issues into the camps, such as diarrhoea, hepatitis, impetigo, scabies, and many others,” he says.

“While the northwest is currently witnessing an alarming increase in COVID-19 cases, the limited access to water also seriously hampers the hygiene measures essential for the prevention and treatment of the virus,” says Mughlaj. 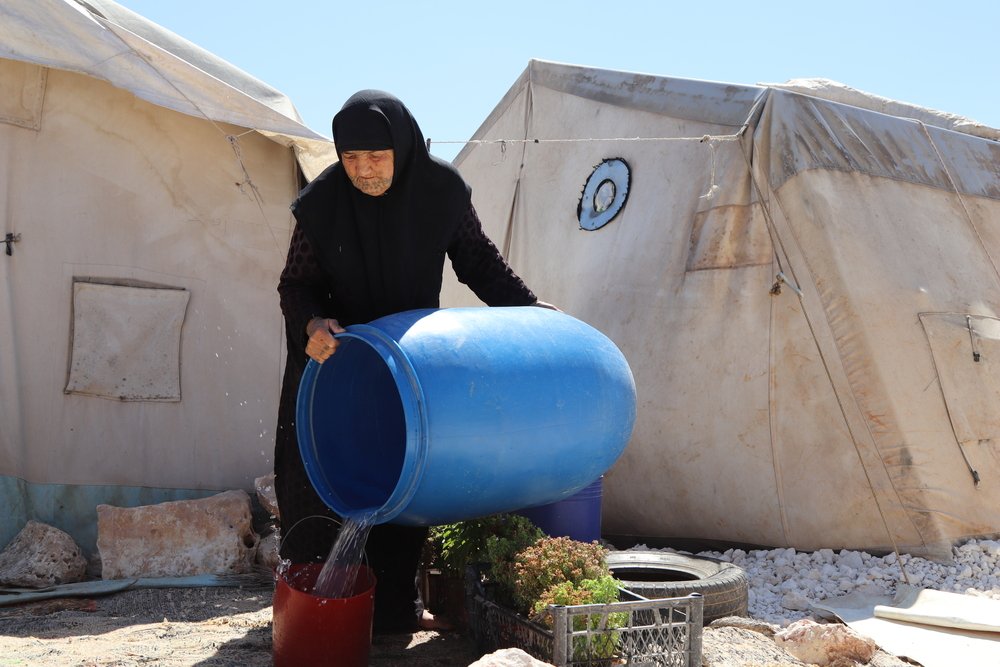 Abdurzaq Alshami
An old displaced woman filling a bucket with clean water provided by MSF in a camp in northwest Syria.

Across northern Syria, humanitarian actors are trying to fill the gaps and respond to the many needs, but the overall accessibility to water and sanitation facilities remains an issue, mainly because of the decrease in funding for such activities.

"Just between the month of May and June 2021... waterborne diseases increased by 47 per cent"

Water, sanitation and hygiene (WASH) operations currently represent only four per cent of the entire humanitarian response budget for the whole of Syria, which is less than one-third of what was spent last year for the same activities.

The impact of decreased funding

In northwest Syria, this decrease in funding has led many organisations to stop water trucking activities in several camps. 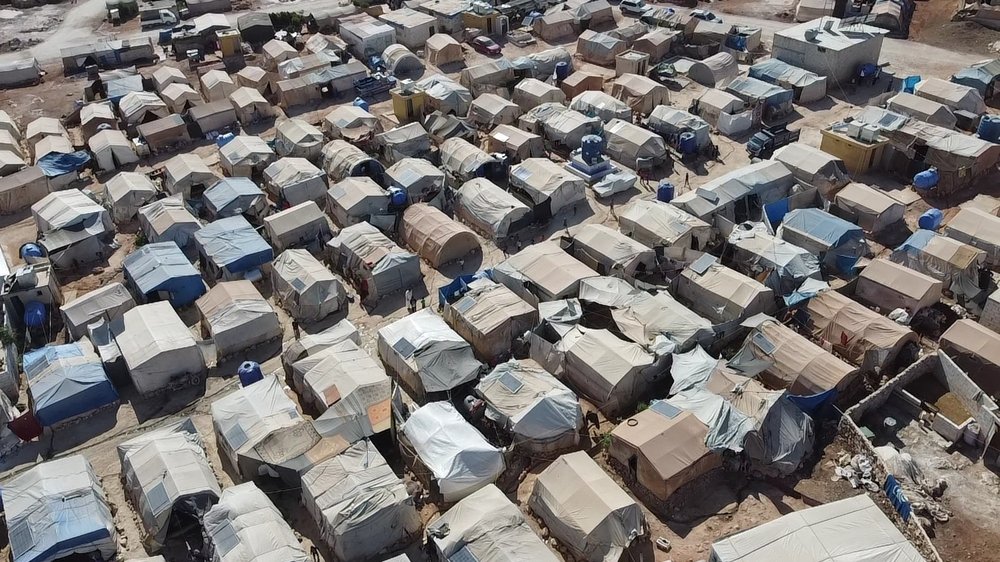 Abdurzaq Alshami
Northwest Syria is home to more than 1.7 million Internally Displaced Persons (IDPs). Most of them have been displaced by the conflict various times and are staying in displacement camps, with very poor living conditions.

Areas like Deir Hassan, for instance, have been strongly impacted by this reduction of services.

Since May 2021, the number of waterborne diseases cases increased tremendously in the area.

“Just between the month of May and June 2021, which is the period when some of these activities were stopped, waterborne diseases increased by 47 per cent,” says Teresa Graceffa, MSF medical coordinator for Syria. 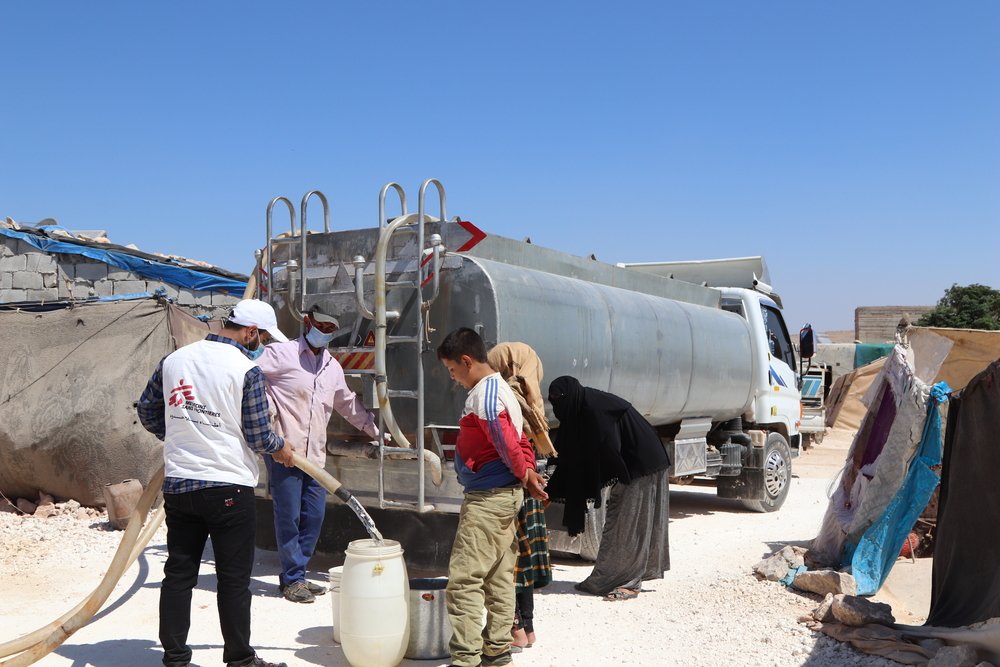 Abdurzaq Alshami
Displaced people are filling their barrels with clean water provided by MSF in a camp in northwest Syria.

In July 2021, our teams noticed rising diarrhoea cases in more than 30 camps in Idlib governorate and also detected frequent scabies cases and other waterborne diseases throughout their consultations in displacement camps.

Since the beginning of the year, 28 per cent of the total consultations in an MSF-supported hospital in Idlib governorate were reported as acute watery diarrhoea cases. 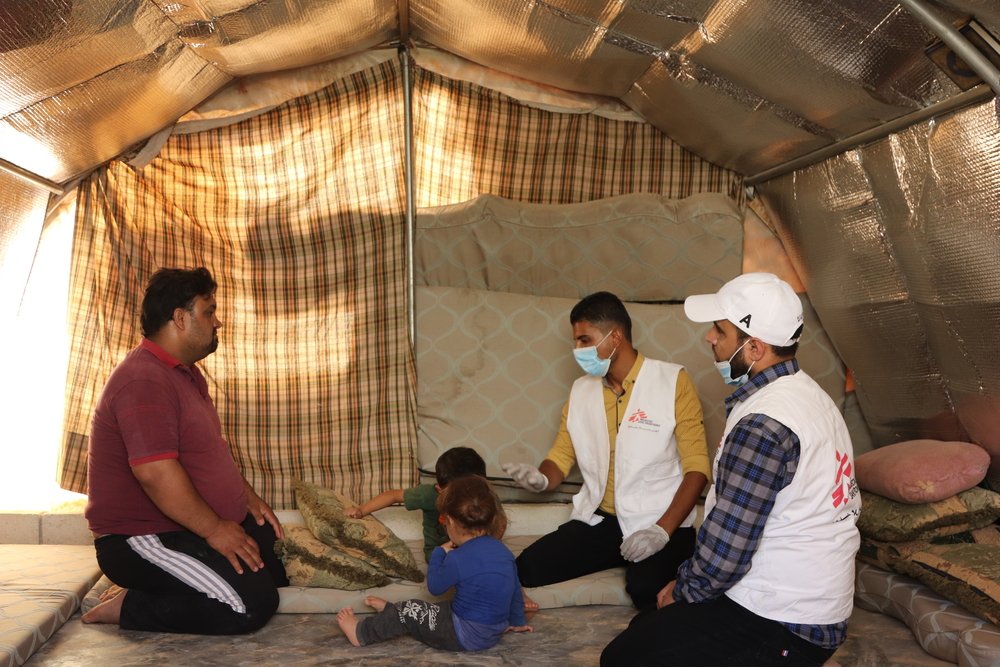 Abdurzaq Alshami
An MSF team discusses with Omar Hashem, a displaced father living in a camp in northwest Syria. "The children were affected because of the limestone in the water,” explains Omar.

As a result, we launched a temporary emergency response and installed an Oral Rehydration Point (ORP) in the hospital, to provide care for patients with mild to moderate dehydration and to inform, sensitise and educate people on how to prevent the spread of diarrhoea.

“But this is not a one-off problem,” says Dr Mohammed El-Mutwakil, MSF field coordinator, “it is a recurring challenge that our teams face due to a structural issue that only worsens with time as funding for such activities decreases.” 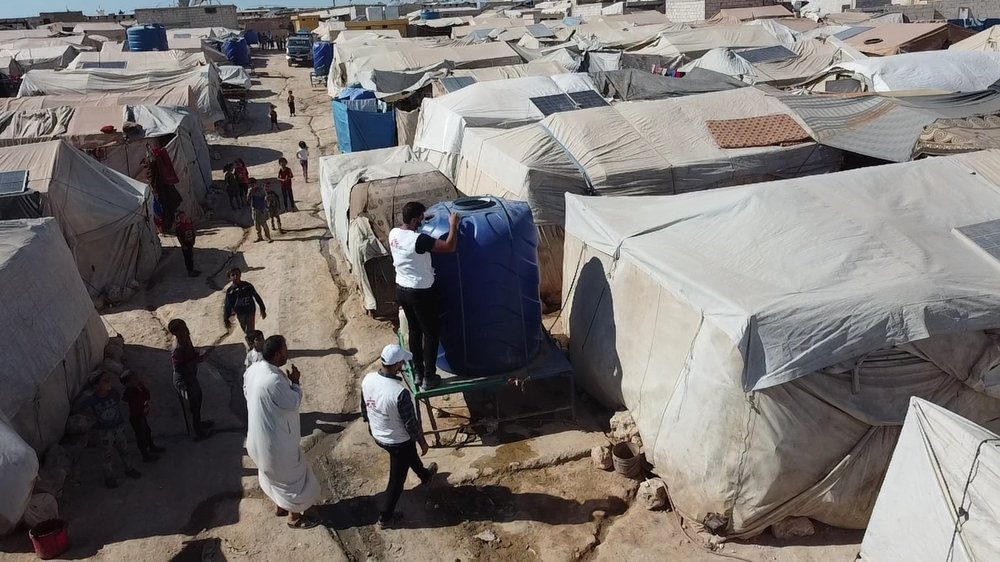 Abdurzaq Alshami
MSF regularly assesses the quality of the Water, Sanitation and Hygiene (WASH) infrastructure in displacement camps and works on identifying the gaps in the WASH services provided to displaced people in northwest Syria.

In northeast Syria, people have also been significantly affected by waterborne diseases, as well as increased food insecurity and are at higher risk of malnutrition, due to the poorer quality of water and reduced availability.

An MSF-supported primary healthcare centre in Raqqa reported that the number of diarrhoea cases in May 2021 was 50 per cent higher than in May 2020. 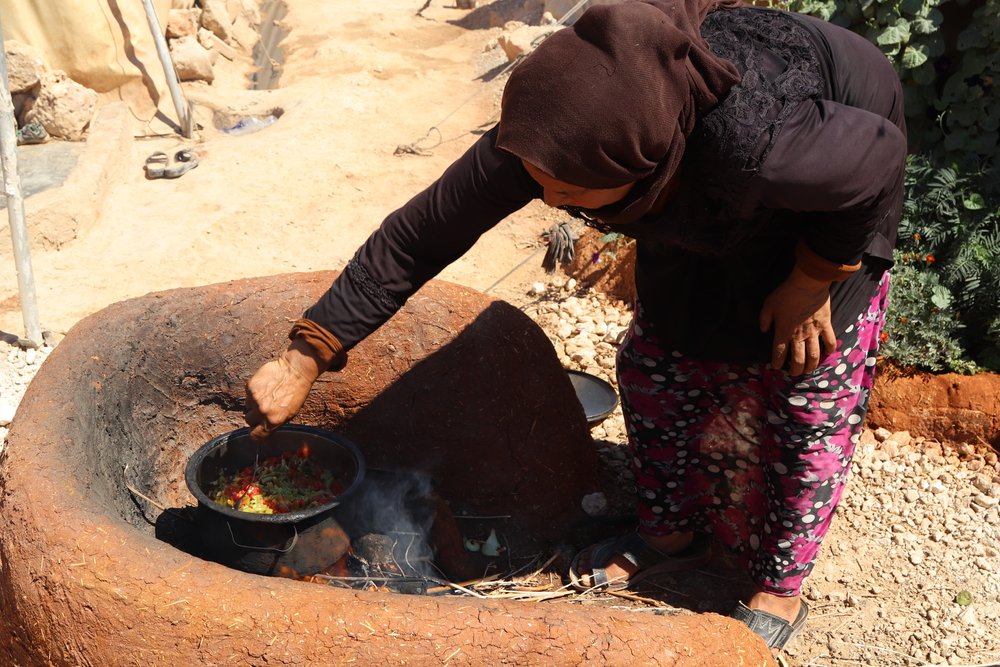 Abdurzaq Alshami
Displaced woman cooking for lunch on woodfire outside her tent in a displacement camp in northwest Syria.

In Hassakeh, one million people have faced reduced access to water for nearly two years, due to repetitive and sustained disruptions of water provision from the Alouk water station, which is under the control of the Turkish authorities. 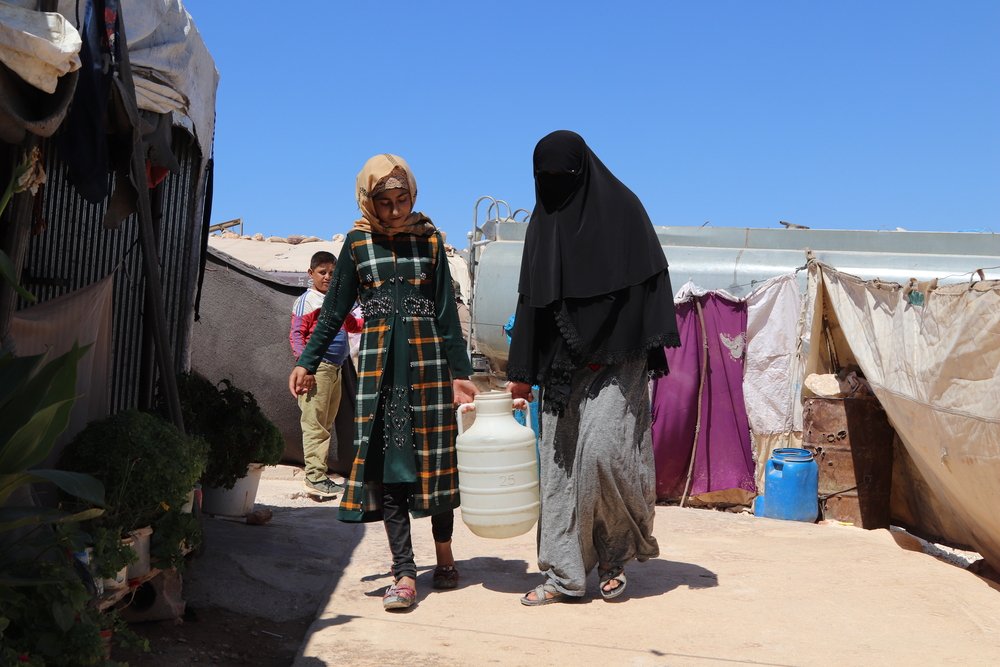 Abdurzaq Alshami
Displaced women carrying a pail of clean water provided by MSF in a camp in northwest Syria. 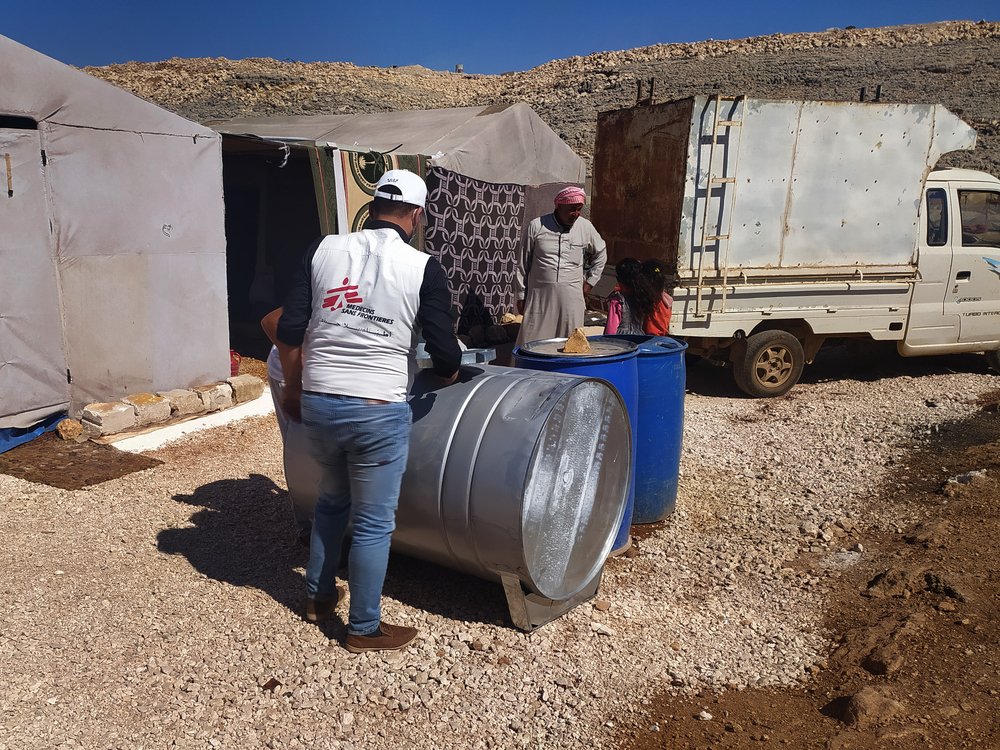 Abdurzaq Alshami
In a camp for internally displaced people in northwest Syria, MSF staff members are supervising a regular water trucking activity to ensure the provision of clean water to the families living in tents.

“Sometimes we buy water ourselves,” says Hussain Muhammad, a man who currently lives in a displacement camp in Idlib governorate.

“But when we can't, we have to wait for support from humanitarian organisations. And if it doesn’t come, during the winter we put pots under the rain to collect water,” he says. 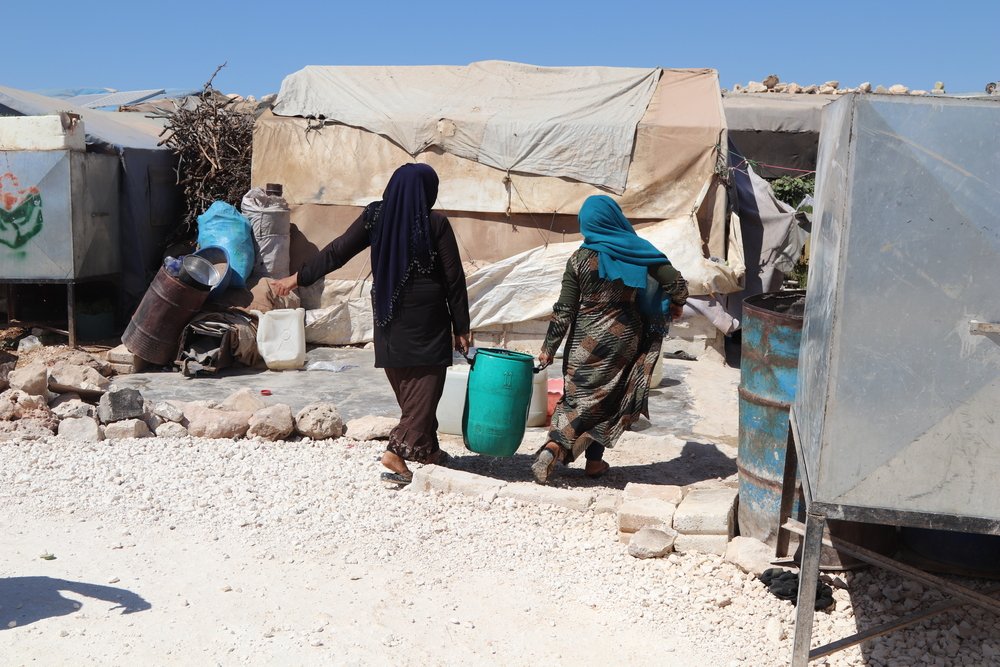 Abdurzaq Alshami
Displaced women are carrying a pail of clean water provided by MSF in a camp in northwest Syria.

“Since the roofs and tents are dirty, the water gets polluted and it becomes unsafe to drink or shower. It is limestone water and contains sand. When we used this water, my one-year old son developed a kidney disease. I was told to buy him bottled water, but I couldn't afford it.”

"Funding gaps continue to widen, the distribution of water is sometimes politicised, while MSF and other organisations cannot fill all the gaps"

In response to this acute water and sanitation crisis, our teams have developed a comprehensive water, sanitation and hygiene response, adopting a gap-filling approach to cover the needs of people in northern Syria over the 10 years of conflict. 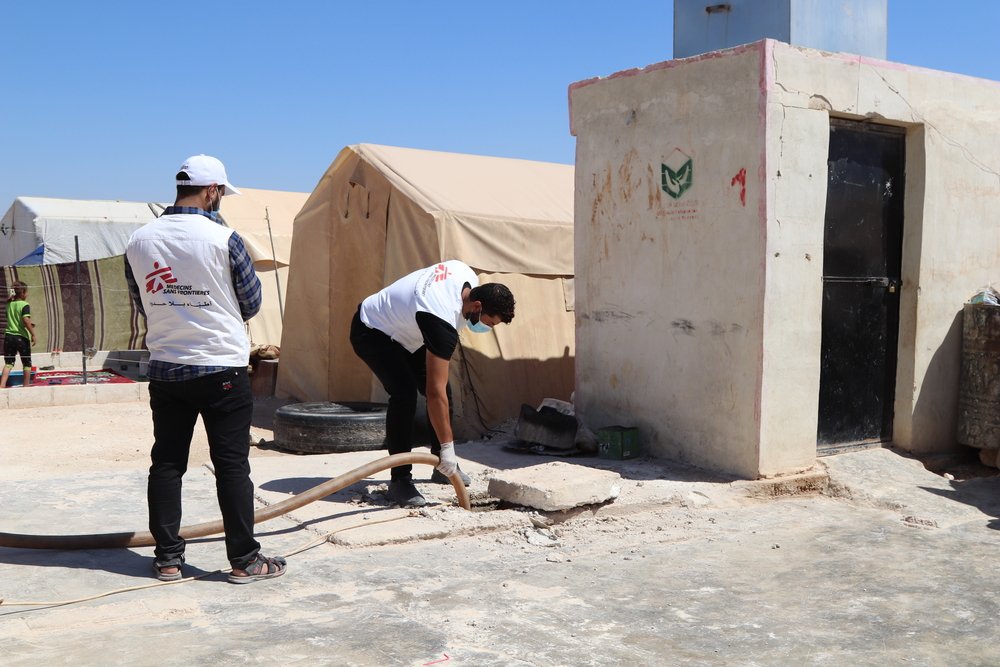 In the spring of 2021, as gaps in funding became more evident, we decided to temporarily scale up our water and sanitation activities.

“We doubled the number of camps we covered in Idlib governorate,” says Ousama Joukhadar, MSF logistics manager for Syria.

We are now running water and sanitation services in about 90 camps in northwest Syria, reaching around 30,000 displaced people. 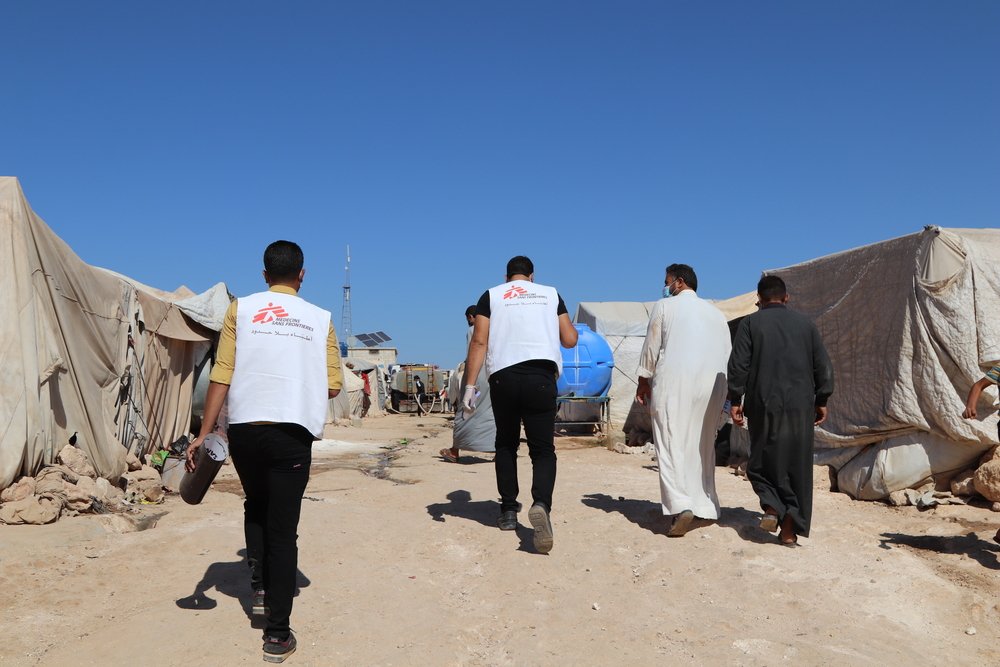 Abdurzaq Alshami
MSF Logistics and Health Promotion teams visit a displacement camp in northwest Syria to conduct Water, Sanitation and Hygiene activities, and to assess the needs of the population.

The activities carried out by our teams include hygiene kits distribution, water trucking and treatment, waste collection, water and sewage networks, latrines construction and rehabilitation, as well as community-based health promotion initiatives.

In northeast Syria, we have also responded with additional safe water trucking in Hassakeh city and an increased malnutrition response in Raqqa.

“But all these initiatives are not permanent fixes,” says Benjamin Mutiso, MSF field coordinator.

“There are still many people who suffer from the consequences of a lack of access to clean water and we find ourselves in a situation where we are unable to cover all the needs."

“Funding gaps continue to widen, the distribution of water is sometimes politicised, while MSF and other organisations cannot fill all the gaps,” says Mutiso. 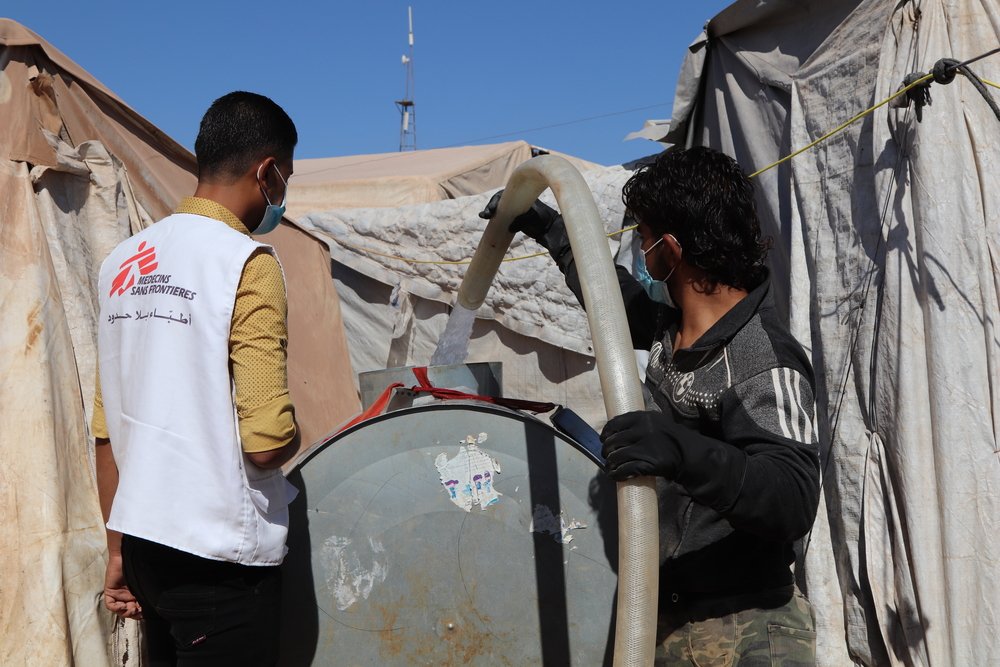 Abdurzaq Alshami
In a camp for internally displaced people in northwest Syria, MSF staff members are supervising the regular water trucking activity to ensure the provision of clean water to the families living in tents.

“People’s health is at risk, and they cannot survive if they don’t even have access to the basics. Major donors should speed up the allocation of funds and ensure the continuity of water and sanitation activities essential to the survival of the people in northern Syria.”