November 30th, 2021- Two years ago, Ahmad Mahmoud Merhi fled the bombings in northwest Syria with his family in search of safety for his five children, only to find himself stuck in a tent lacking the most basic means of decent living, and with no long-term solution in sight. “I have been living here, in this tent, with my family for the past two years. I eat, sleep, shower, cook, and do everything in here”, he says. Ahmad is dreading another harsh winter in this camp for displaced people. “We went through hell during the summer (because of the heat). But winter won’t be any better”. 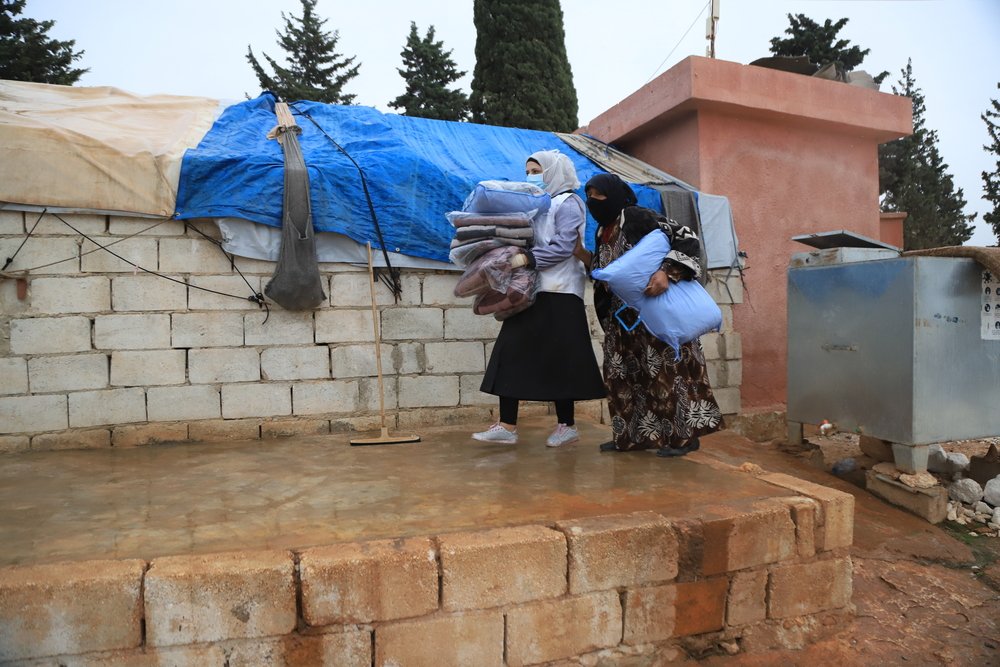 Another winter season is approaching in northwest Syria, where over 2 million people, the majority of whom are women and children, remain internally displaced. 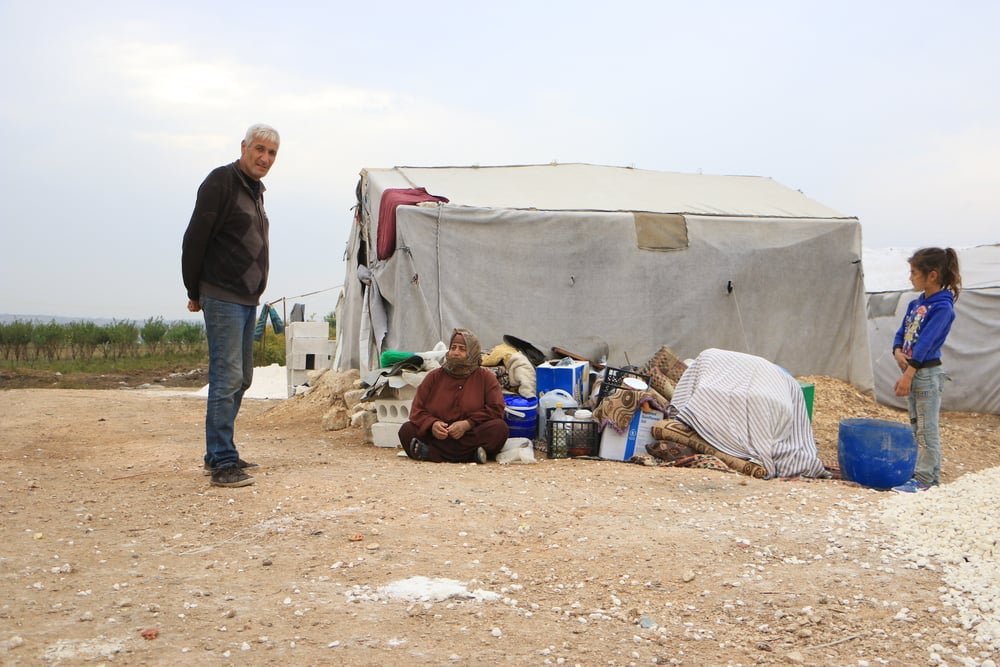 MSF
A displaced family sitting next to their luggage outside while waiting the isolation of their tent to be done.

Leaking tents, mud-filled streets and freezing temperatures contribute to a further deterioration of people’s physical and mental health and their overall living conditions. 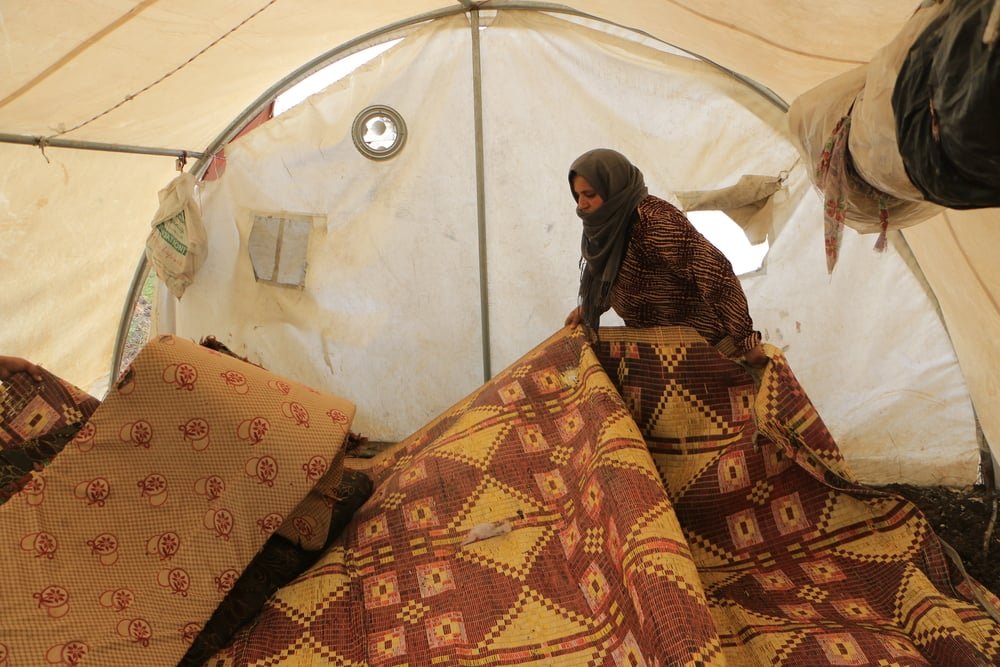 MSF
"Water and sewage leak into the tent from below and ruin the carpets. We dry it up and bring it back in the afternoon”, says Aisha Al-Hassan, a displaced woman in northwest Syria.

“Every year, the tents need insulation to be protected from rainwater and prevent leakage."

"Camps located in low-lying areas are less exposed to wind but are also often severely damaged by floods”, he adds.

In order to mitigate the consequences of the cold winter on the displaced people, Médecins Sans Frontières/Doctors Without Borders (MSF) teams are currently conducting “winterization” activities that include distributing kits of warm clothes and blankets to around 3,000 families in 18 camps. 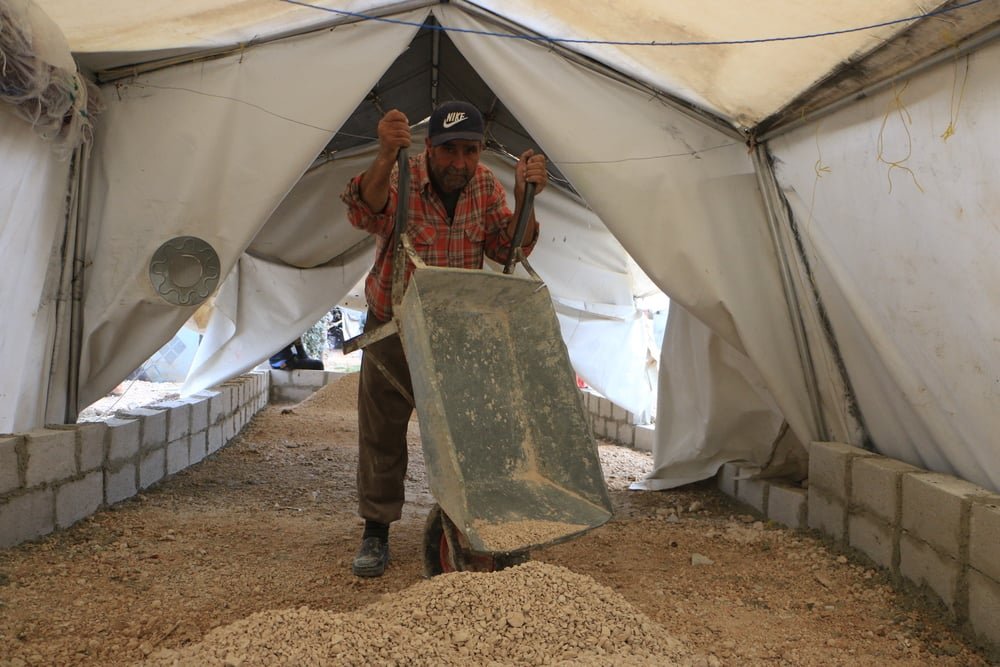 MSF
MSF logistics staff are preparing to raise the floors of tents in a displaced camp in northwest Syria.

Moreover, around 3,900 families also benefited from tent flooring, roof isolation and thermal insulation to overcome flooding and extreme cold temperatures. MSF will continue running similar activities throughout winter, including the surface water drainage in the camps.

Time is a key factor

Winterization activities usually start too late in northwest Syria, when winter is already here, and this is mainly because of the lack of funding for such activities. 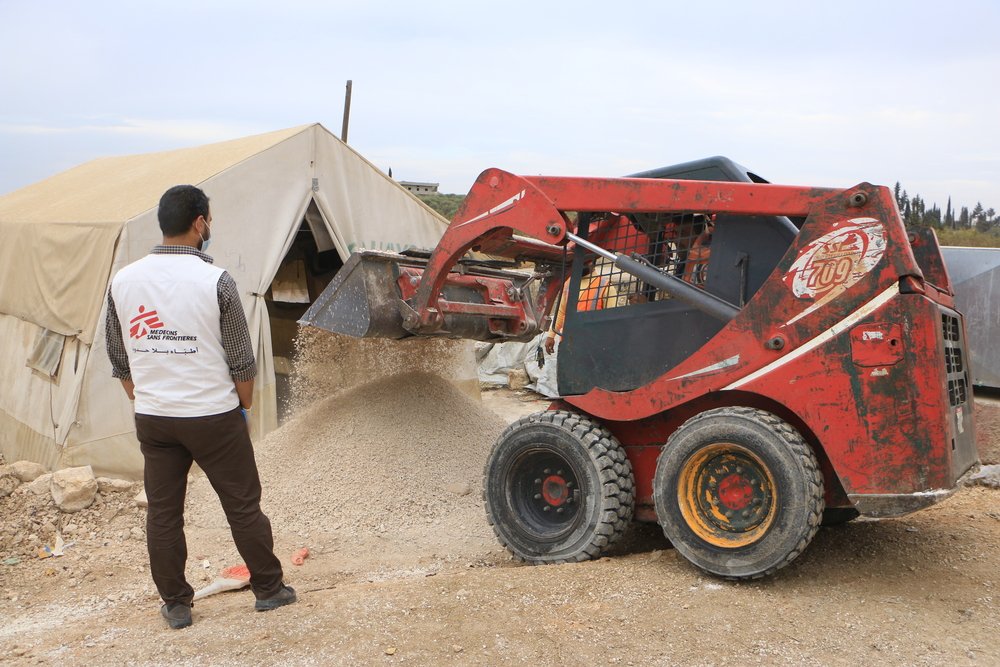 “This year, we worked hard to complete the winterization activities right before the harsh winter season starts” explains MSF Head of Mission for Syria, Yasser Kamaledin.

“We wanted the people in camps to be as prepared as possible from the beginning of the season." 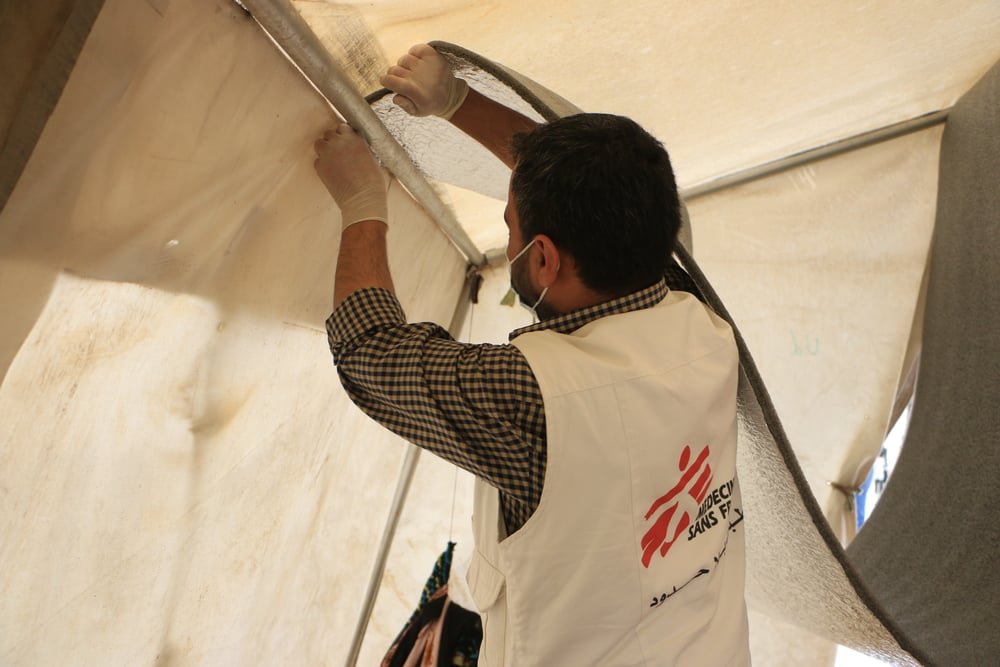 MSF
MSF logistics staff are installing tent roof isolation and a thermal insulator inside a tent.

"It is one of the most appreciated activities by the population in the camps because of the instant impact on their daily lives."

"Time is a key factor for this intervention, if it is done in the middle of winter, it is already too late.”.

"If it is done in the middle of winter, it is already too late"

Every year, MSF witnesses the direct health impact of winter through its activities in the camps.

People living in camps face the prospect of suffering from respiratory diseases, waterborne diseases and frostbites as well as complications related to smoke inhalation and burns due to the inadequate heating methods and the fuel that is stored in the tents. 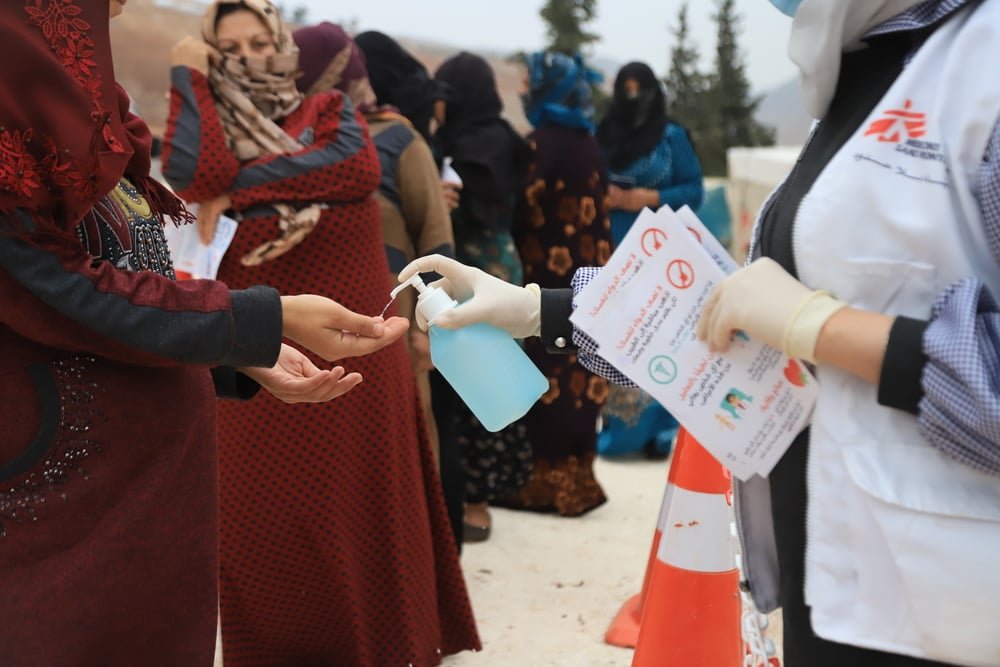 For instance, MSF has noticed an increase in respiratory illnesses by 30% between autumn 2019 and winter 2019-2020 in Deir Hassan camps, even before COVID-19 arrived into northwest Syria.

Moreover, respiratory illnesses are constantly in the top three illnesses reported in our facilities in the northwest, especially during winter. 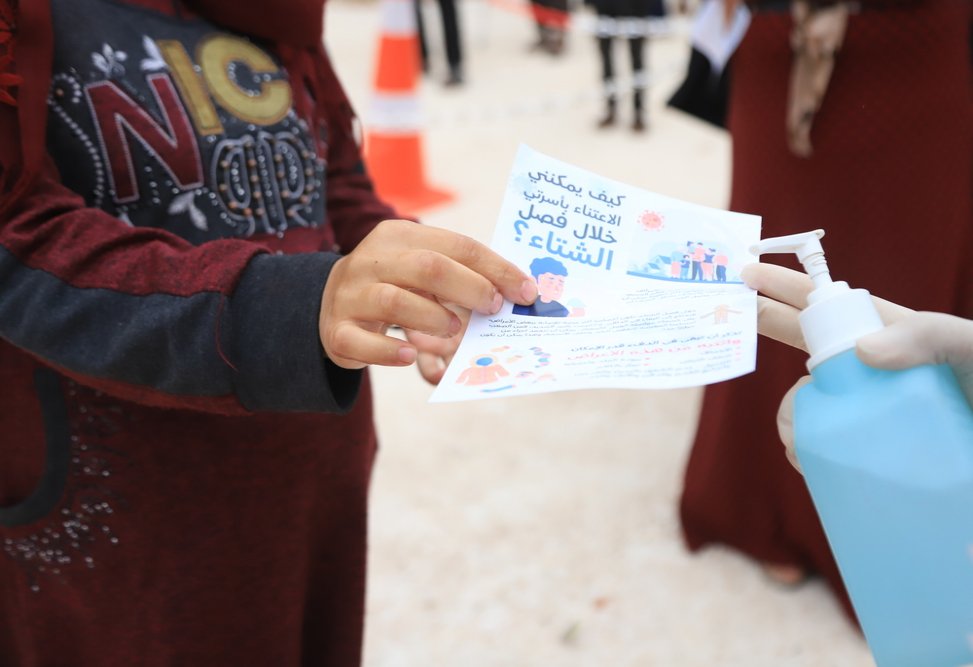 “Today was just a sample of the daily reality of displaced people. It was freezing”, says Shatha Folfola, MSF health promotion Officer, after conducting a Health Promotion session during a winter kit distribution in a camp.

"Their lips and hands were turning blue. They weren’t even wearing shoes."

“Everyone was feeling cold and we are still in the month of November. People came to take the kits and left immediately. We saw children wearing light clothes. Their lips and hands were turning blue. They weren’t even wearing shoes”. 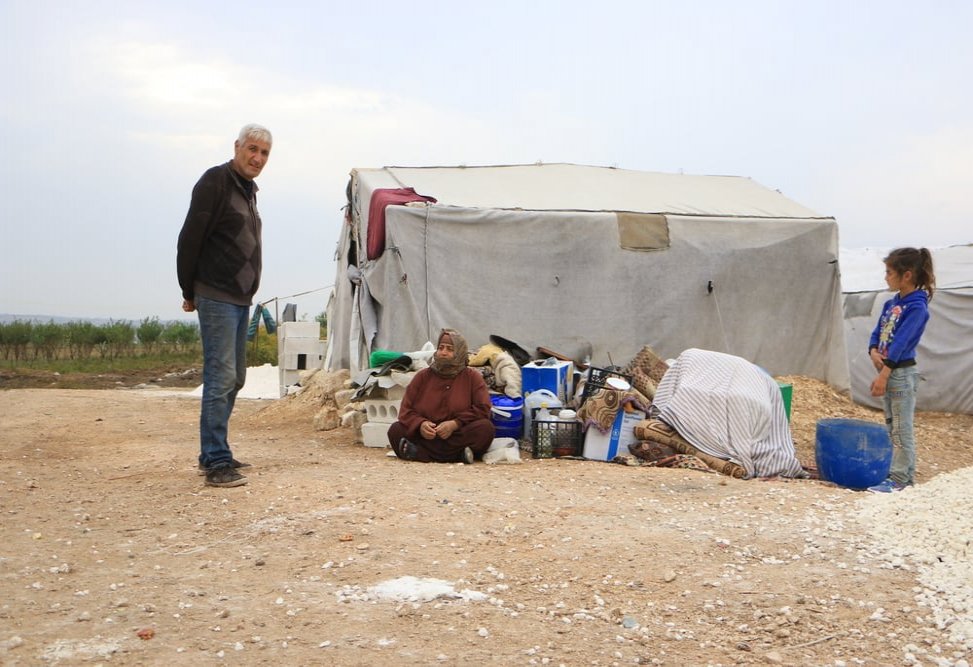 MSF
A displaced family sitting next to their luggage outside while waiting the isolation of their tent to be done.

Ahmad’s children are living similar experiences. “The cold weather is impacting my child’s health”, he says.

"But we couldn’t afford to take him to the doctor”

“My son is constantly suffering from stomachaches and colds. My other child’s temperature reached 40 degrees. Pimples spread in his mouth, hands, and legs due to the fever."

"But we couldn’t afford to take him to the doctor”. 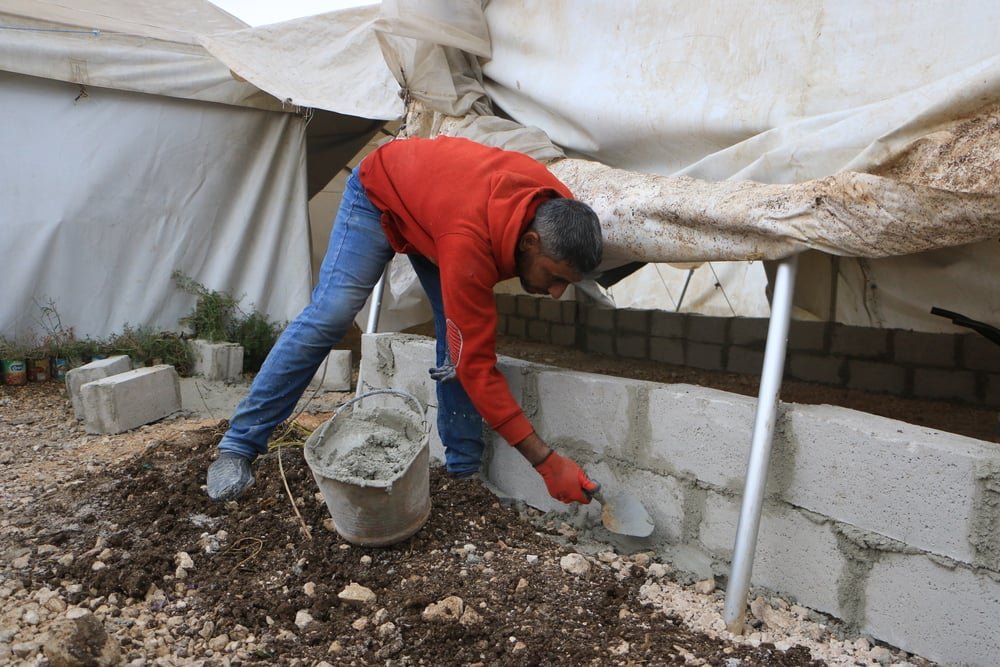 MSF
MSF logistics staff are raising the floor of a tent.

While humanitarian needs are increasing due to the protracted conflict in Syria, the funds to answer those needs are drastically decreasing.

The UN estimates that 210 million USD are required to address the essential needs of more than three million people, including both the residents and Internally Displaced People, in northwest Syria during winter.

However, only 23% of this fund is currently available. 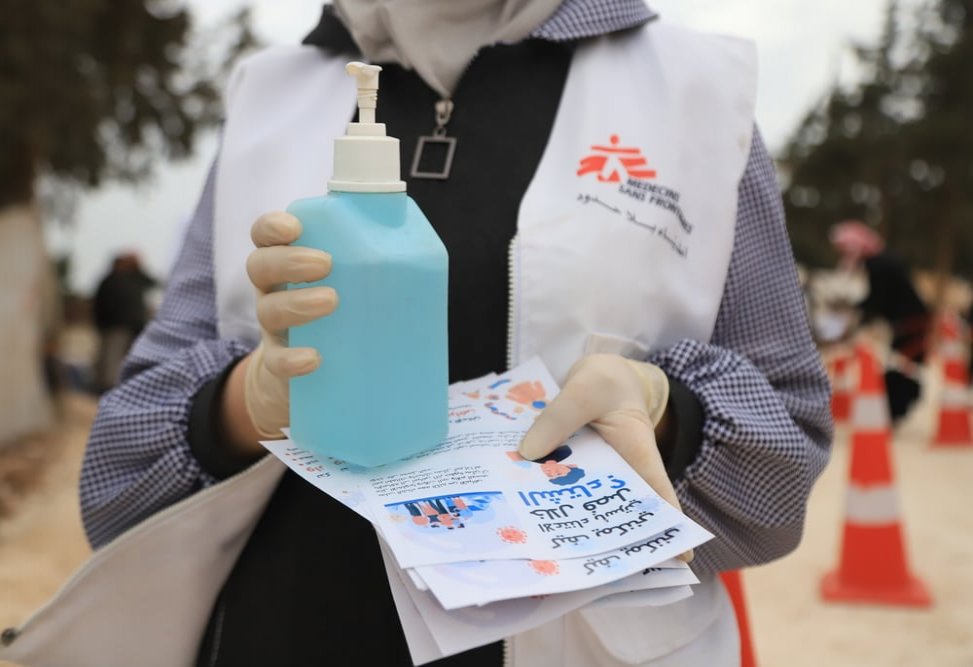 “As long as there are camps in northwest Syria, the needs will most likely persist every year” adds Joukhadar.

“MSF is not able to respond efficiently to all the increasing needs in the camps, especially during winter." 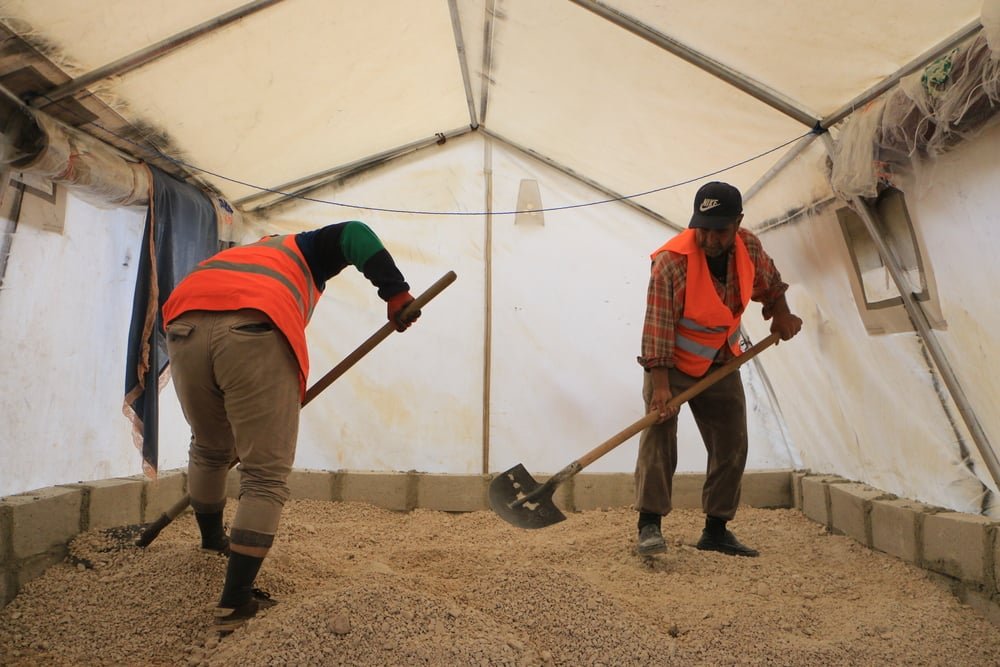 MSF
MSF logistics team are raising the floors of tents in a displaced camp in northwest Syria.

"There’s a need to accelerate the allocation of funds and implementation of the winterization activities, as early as possible, to ensure the survival of the population living in the camps in northwest Syria.”