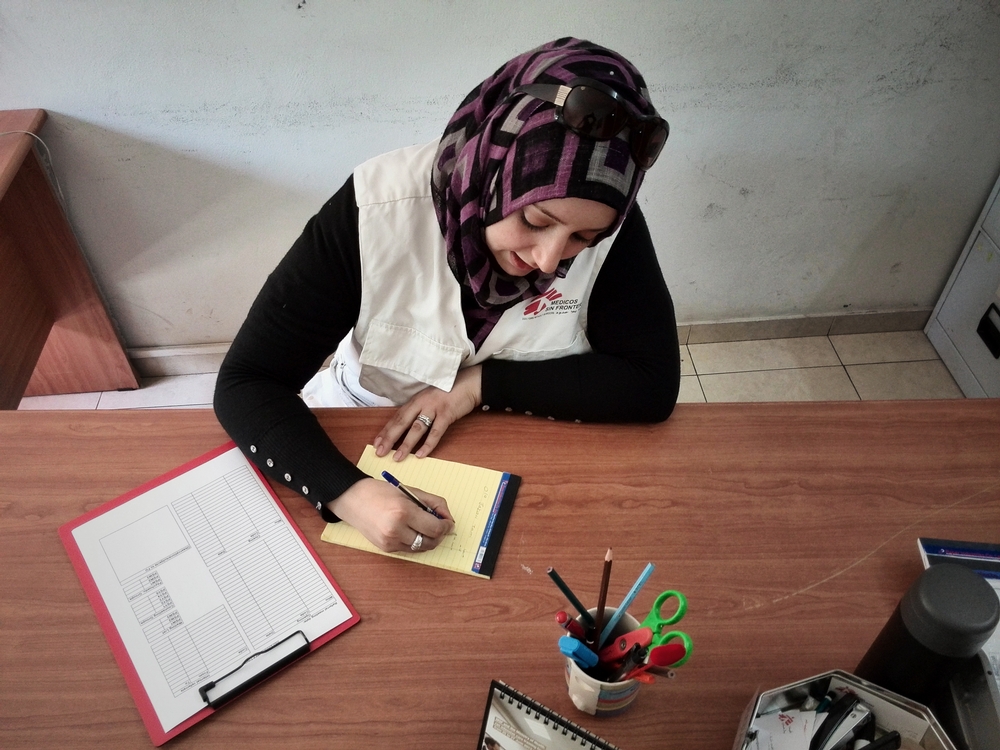 Ola Jabari, an interpreter and mental health worker for Médecins Sans Frontières/Doctors Without Borders (MSF) in Hebron city describes daily life and its restrictions in the Occupied Palestinian Territories.

A network of checkpoints keep Ola from the sea

Her name is Ola Jabari, she is 29 years old and it was always her dream to know the sea. I smile when I hear her name. In Spanish, Ola … “Yes, I know”, she interrupts, “the MSF psychologists from Spain always remind me about it”. Her name is destined for the sea (it means "wave" in Spanish).

Ola was a teacher and now works with MSF's mental health team in Hebron. She is also an interpreter. And the sea, her sea, is not so far away; only 60 kilometres separate Hebron from the Gaza sea. However, it is almost impossible to get there via the network of checkpoints, imposed by the conflict, that control people's movement. 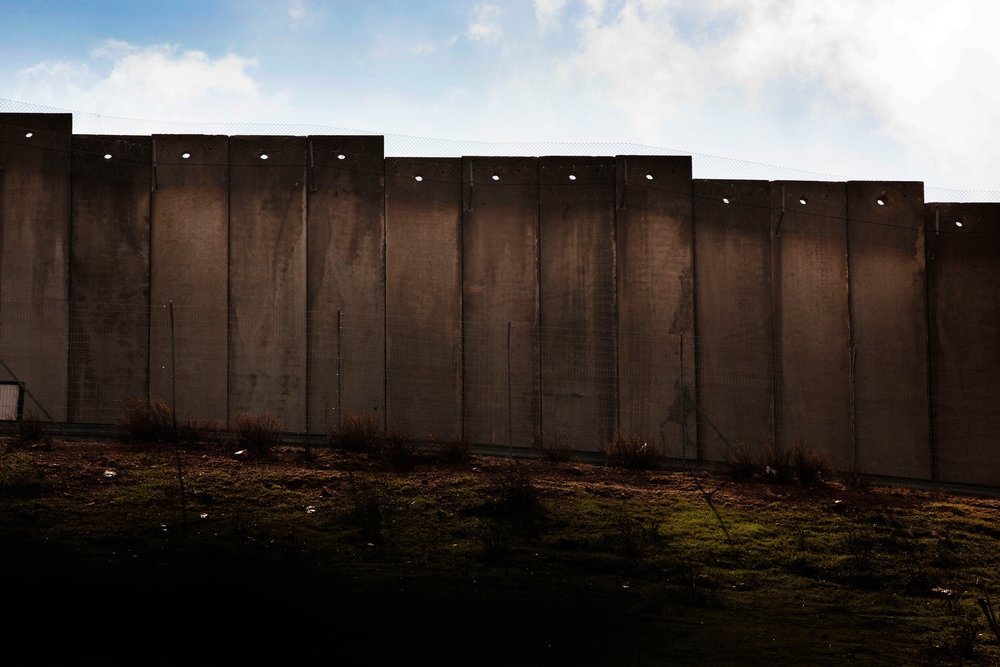 Juan Carlos Tomasi/MSF
The wall in Jerusalem, confining the movement of the population. The wall is one of the most striking sights of restricted life in the Occupied Palestinian Territories (OPT)

Occupation of the West Bank and life behind the wall

Since the West Bank was occupied, the Israeli army has maintained a massive deployment there. It is a complex system for keeping surveillance over the population, and one that goes far beyond the separation barrier.

The Palestinian population are subjected to fixed and mobile checkpoints, watchtowers, searches and roadblocks on a daily basis. Coming on top of this is the expansion of settlements in the area – considered illegal under International Humanitarian Law (IHL), but under the protection of the Israeli army.

In Hebron, the largest city in the West Bank, there are several Israeli settlements. One of these is in the historic centre, and around a thousand Israeli soldiers are responsible for the security of its 800 colonists.

Gaza: A population under seige 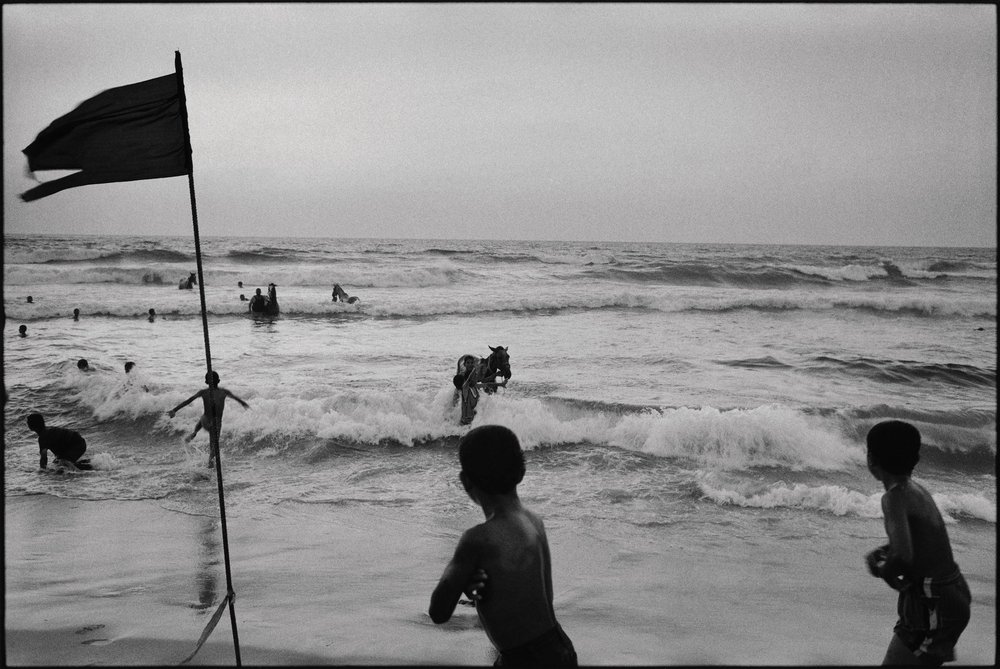 Philippe Conti
The sea remains one of the rare distractions for families living amid violence in Gaza, and a distant dream for those confined elsewhere

13 years since Ola crossed the 30km distance to Jerusalem

Another of Ola's favourite places is Jerusalem. Like many other Muslims, she especially likes the Al-Aqsa Mosque that crowns the old town.

It had been 13 years since she was last able to cross the divide between her city and Jerusalem, 30 kilometres away – the longest 30 kilometres in the world. You might take 13 years to travel them, or go an entire lifetime without ever arriving.

Thanks to Ola's work for MSF, she obtained a permit for a few hours in Jerusalem in order to attend a meeting.

I ask her what made this day so special, apart from the meeting. "More than anything, going to the Great Mosque". They say here that one prayer in Al-Aqsa is worth 500 prayers anywhere else. I ask if she wished for something in particular inside the mosque. "To return to Jerusalem with my son". 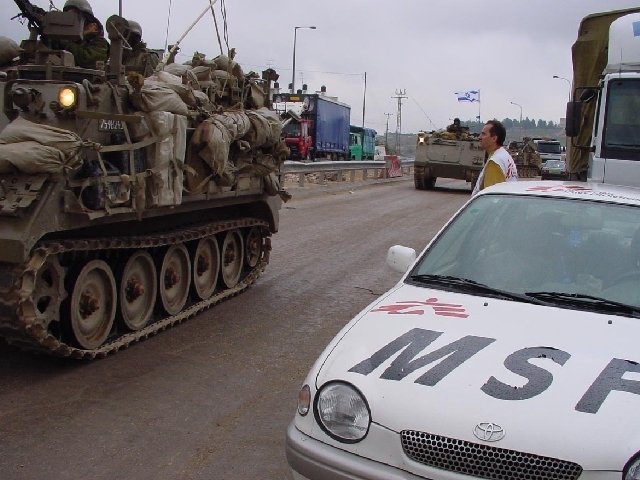 Juan-Carlos Tomasi
MSF staff wait to pass a checkpoint to get to Ramallah, a Palestinian city in the central West Bank located 10 km north of Jerusalem

Ola's son is two years old and still hasn't seen the sea or Al-Aqsa mosque. We have already said that it is a distance measured in time, not space.

Ola talks to me about all these things at the MSF project offices in her city. She speaks quickly in fluent English, as if in a hurry. And yet her movements contradict her voice, accustomed as they are to waiting, stillness and patience.

Every day, Ola listens to, translates and interprets dozens of stories from patients suffering the effects of mental health problems.

MSF has been working in the West Bank since 2000, providing medical and psychosocial support to people affected by the conflict. In the more than 5,000 individual and group consultations carried out to date, 40% of patients have been children.

Among the most common pathologies diagnosed in the last year, anxiety disorders were the main reason that 54% of patients sought a consultation.

The symptoms usually shown by patients range from excessive fear and constant worry to urinary incontinence sleep disorders and anger. Many of the patients showed at least three of these symptoms.

“The worst part is when the mothers of the prisoners talk”, she says. “I met a woman whose four sons were in prison. I can't forget the tears she wept at every word, as she talked about how much she missed their faces, their smiles, their voices, their eyes and their kindness. She wanted so much to hug them again.

I felt at that moment how a bitter sorrow exuded from her body. After those kinds of sessions in the mental health care, she would continue crying”. 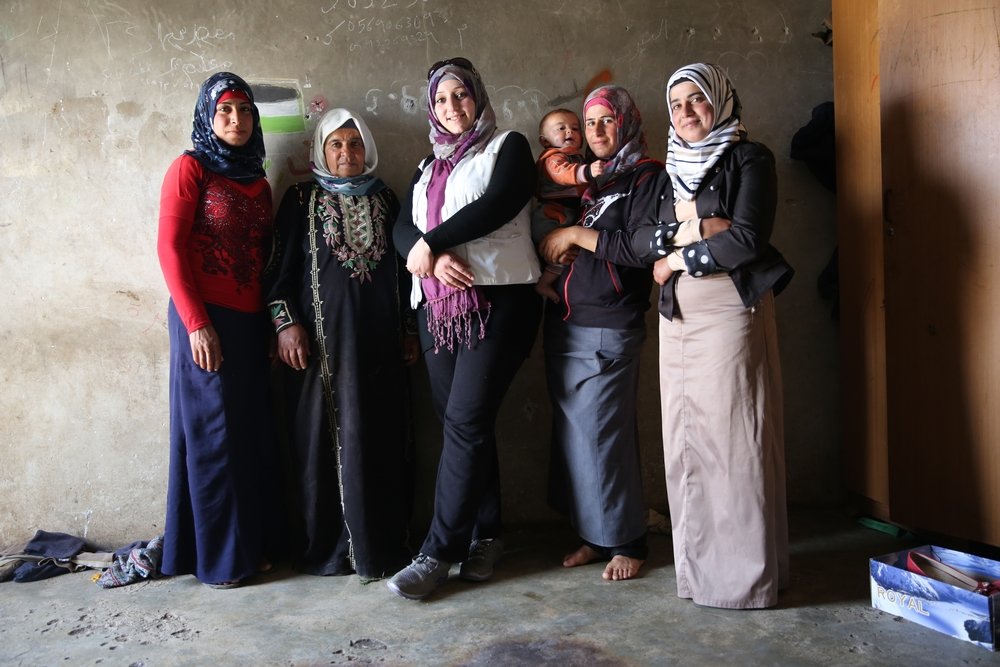 Children as young as 12 are imprisoned

As well as witnessing these situations on a daily basis, children are sometimes the direct targets of abuse.

From the age of 16 they receive the same treatment as adults.

Numerous reports published by organisations such as UNICEF reveal serious abuses committed by the Israeli armed forces during the detention, interrogation and jailing of minors.

The only colour in Hebron is the grey of the concrete

To ease the suffering of a life lived between walls, so close yet so far from the sea, and to soothe the pain of the stories she helps to translate, Ola has a medicine: her writing.

A journal of notes, of reflections made along the way, that prevent the tears of women who cannot touch their children from staining her too deeply. She wanted to take photos of herself soothing the pain away, I mean, writing.

As well as dreaming of the sea, Ola also has recurring dreams of a plot of land. Close to the famous Damascus Gate, on the walls of the old city of Jerusalem. Her grandfather had a small farm there. It was seized from him in 1967, a key year in the conflict between Israel and Palestine.

I ask Ola how she imagines the farm to be like. She repeats the words of her grandfather: "full of orange trees – sun and a sea of orange trees". I tell her that her dreams are full of light and colour. The only colour in Hebron is the grey of the concrete. 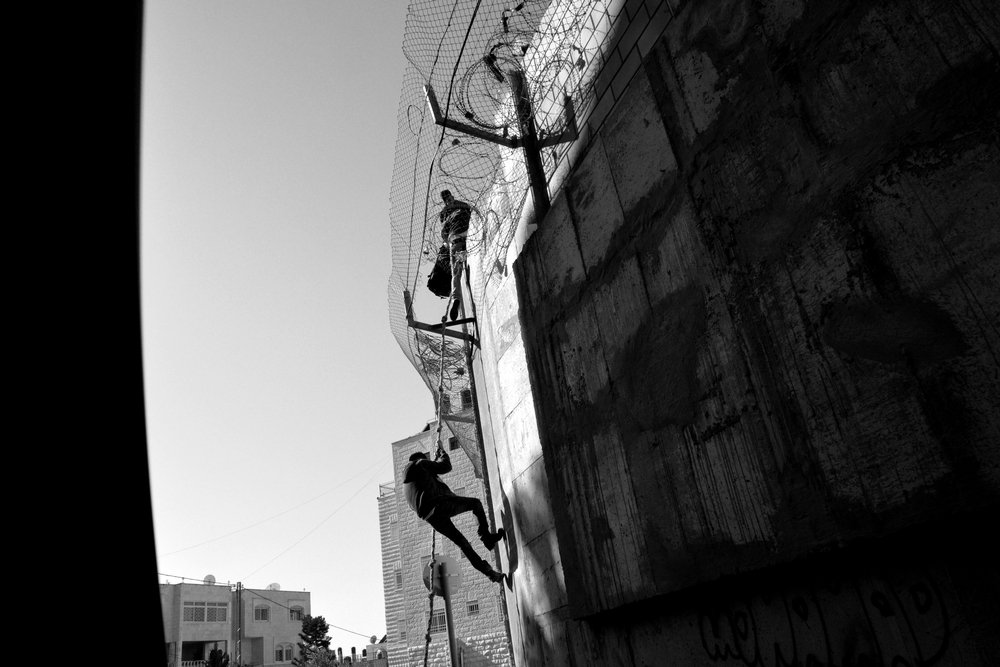 Finally breaking free of the checkpoints of the West Bank

Like many people born in the West Bank, Ola longs to move about more freely, without being observed along the barrel of a gun. Getting about is sometimes a struggle against a deadly possibility.

As Ola likes to write, we talk about books. In one novel, David Grossman's To the End of the Land, an Israeli woman called Ora (how strange) has two children. One of them enlists in the Israeli army and is called up. Ora decides to travel around her country in the vain hope that no soldier will visit her house to announce her son's death as long as she is on the road; travelling around keeps him alive. Moving around is a way of keeping hope alive.

Only when she turned 19 was Ola able to visit the sea, and that was only for a few short hours. It was the Red Sea.

She had to pass through the Israeli checkpoints and cross the Jordanian border on a trip that was again too long and tiring to be repeated often.

But, the second time was even better. Just a couple of years ago she was invited to an MSF meeting in Barcelona. "To walk freely along the Ramblas, knowing there were no checkpoints or walls, or armed people… And the sea", she says of her trip. 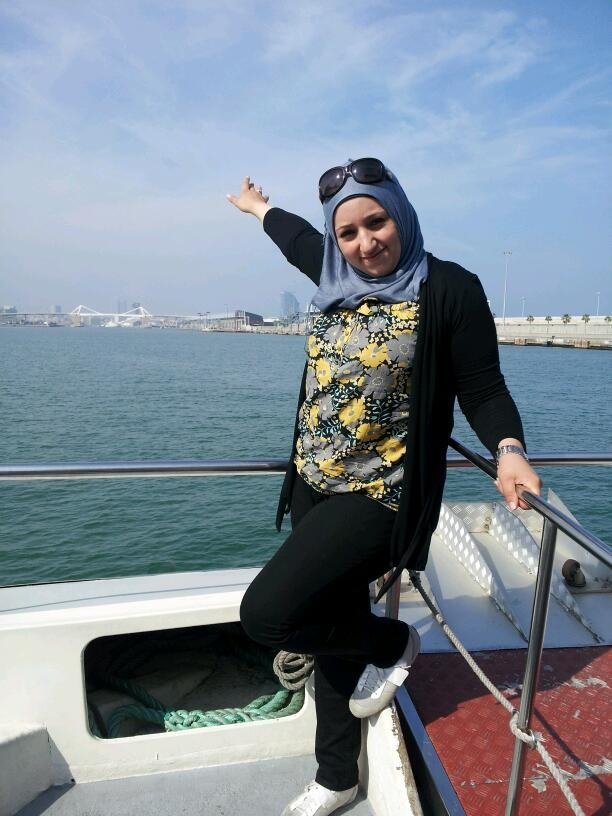 On that occasion, Ola, the interpreter from MSF's mental health team in Hebron, found her sea without borders.

Unhurriedly, and without fear of being prevented from returning to her family. She wanted to leave us proof of that with this photo where she appears almost Olympian, like someone who travels a long way in order to be themselves again.

A recognition that for many people it takes a lifetime to travel the shortest distances.

Ola belongs to the sea and not only to a land scarred with colourless concrete, walls and wire-fences.

To be born there sometimes means that a normal life, such as her own, is not possible. And the secret is to not stop moving, to demand the right to move so that hope can be kept alive.

Find out more about MSF's work in the Occupied Palestinian Territories