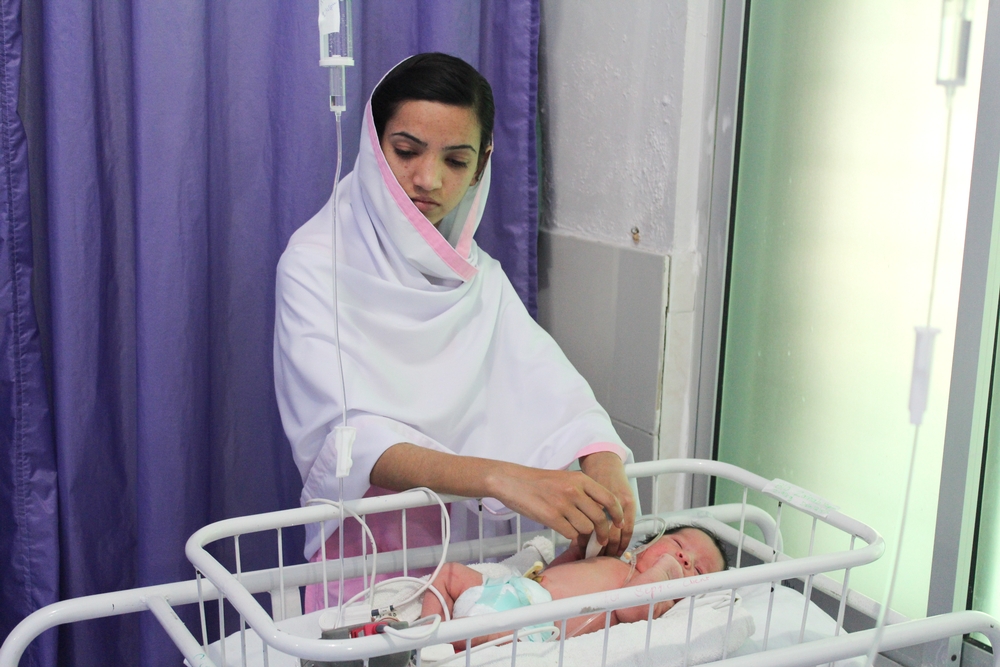 In Pakistan, the misuse of labour-inducing drugs poses serious health risks to mothers and newborns. Hoping to speed up birth or avoid costly hospital visits, drugs like oxytocin are often administered unnecessarily and outside of health facilities. Driven by the alarming evidence that came to light during an operational research study conducted at its hospital in Timergara, Médecins Sans Frontières (MSF) piloted a dedicated training for health workers to counter this dangerous misuse.

Up to 1,100 babies are delivered every month at the District Headquarter Hospital in Timergara in northern Pakistan, where MSF runs a maternity ward. It was here that 35-year-old Shazia’s* baby boy was born by emergency caesarean section. “I went for an antenatal check-up at a private clinic first, where I was given several oxytocin injections because I had started to lose some fluid. But my labour did not progress despite having contractions, and I was sent to another hospital in Bajour. The staff there saw the IV-line in my arm and sent me to Timergara, where I was operated on immediately.”

Shazia is among the 20 per cent of pregnant women who arrive at the Timergara hospital with complications, and among the 10 to 15 per cent who require a caesarean section. Pakistan has one of the highest maternal mortality rates in South Asia, and the highest newborn mortality rate in the world, with one in 22 babies dying during the first month of life. 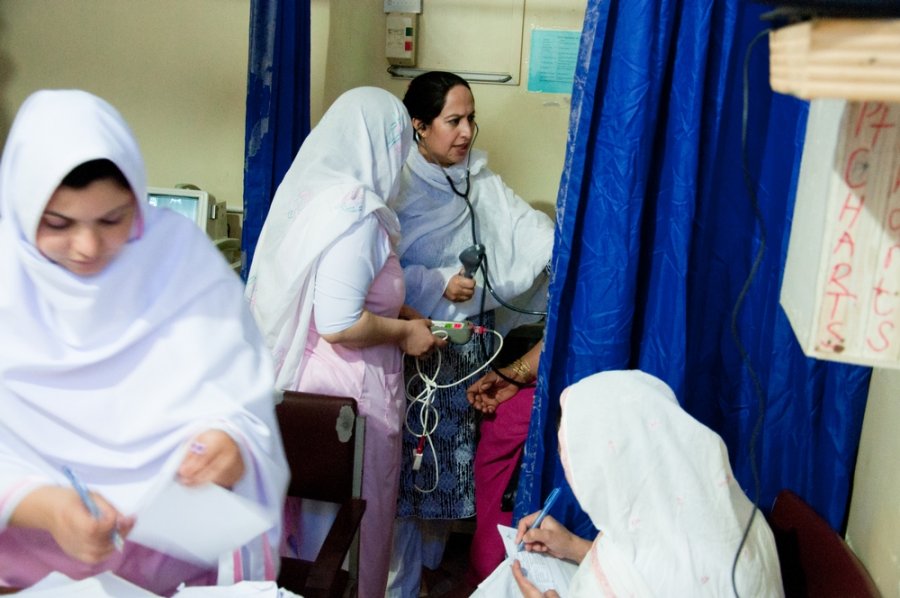 Amandine Colin/MSF
Triage area at the Timergara District Headquarter Hospital. Pakistan has the highest newborn mortality rate in the world.

It is difficult to determine exactly how many complicated cases relate to oxytocin misuse, yet patient stories like Shazia’s are the daily fare in several MSF-supported hospitals in Pakistan. In 2015, MSF’s operational research unit LuxOR conducted a study in Timergara, assessing how the unregulated use of oxytocin links to specific maternal and neonatal health complications. The study provided strong evidence on associated health risks: women with obstructed or prolonged labour receiving oxytocin prior to reaching the hospital were over three times as likely to suffer uterine rupture, and their babies at a significantly higher risk of suffering severe birth asphyxia and stillbirth.

Rehana*, who is 18 years old, lost her child after being given several oxytocin injections to induce labour at a private clinic. “When I reached the MSF maternity in Timergara I was bleeding and in great pain,” she explains. “The ultrasound showed that my uterus had ruptured and that my baby had died. I lost my child, and my uterus had to be removed.”

While patients in the Timergara study reported that it is most often traditional birth attendants and community midwives who illegally administer labour-inducing drugs, the causes of the problem are manifold and more complex. Oxytocin is a hormone used safely worldwide to stop bleeding after birth. To induce labour, it should only be administered by a doctor or gynaecologist in a health facility where mothers and their unborn babies can be monitored closely. Used correctly, the drug helps save the lives of countless mothers and children.

In Pakistan, however, oxytocin is available in many pharmacies without prescription for a mere few cents, and is a favoured means of speeding up labour and relieving pain. Mothers, in-laws, and other family or community members want babies to be delivered as fast as possible to avoid the long trips from remote villages to a hospital or to avoid treatment costs. “Women demand oxytocin even if they have no complications, and go to other facilities if they are refused,” says Dr Ambreem, an MSF midwife supporting several projects in southern Pakistan. “Often, women receive oxytocin as part of a cocktail of other drugs, or combine them with traditional treatment methods like stimulating the cervix with feathers, oils or onions. These methods are believed to induce labour,” she adds.

In turn, health workers like community midwives, lady health visitors, female medical technicians, or traditional birth attendants are put under pressure by patients’ families and in-laws, and are themselves often unaware of the health risks and the correct way to use oxytocin.

Collaborating with the Ministry of Health in Pakistan, MSF’s strategy to tackle the misuse of labour-inducing drugs therefore addresses health workers, hospital staff, patients, their communities, and the authorities alike. “We have translated our research findings and programme evidence into clear messages to advocate with authorities, and have launched a radio and social media campaign, health promotion activities in communities, and training for health workers,” explains Samuel Sieber, Policy and Practice Advisor with MSF’s operational unit LuxOR.

The modular training course on the correct use of oxytocin was piloted in late December 2018 and early January 2019 in MSF projects in Balochistan and Peshawar, and includes classroom sessions, role play, and several case studies. Over 130 midwives, doctors, hospital staff, and health authorities attended the sessions. “Participants showed great interest and improved their knowledge of the correct use of oxytocin within just a few hours,” says MSF Advocacy Manager Syed Yasir Kazmis.

But the sessions also help national authorities and MSF better understand the multi-faceted causes of the problem, with participants sharing their experiences and discussing possible solutions. “We hear of patients who wrongly believe that their babies need to be delivered on the date suggested by the ultrasound. Others refuse to go to hospital because they fear being seen without their veil, or simply because they don’t have the money to travel to a health facility,” adds Syed. 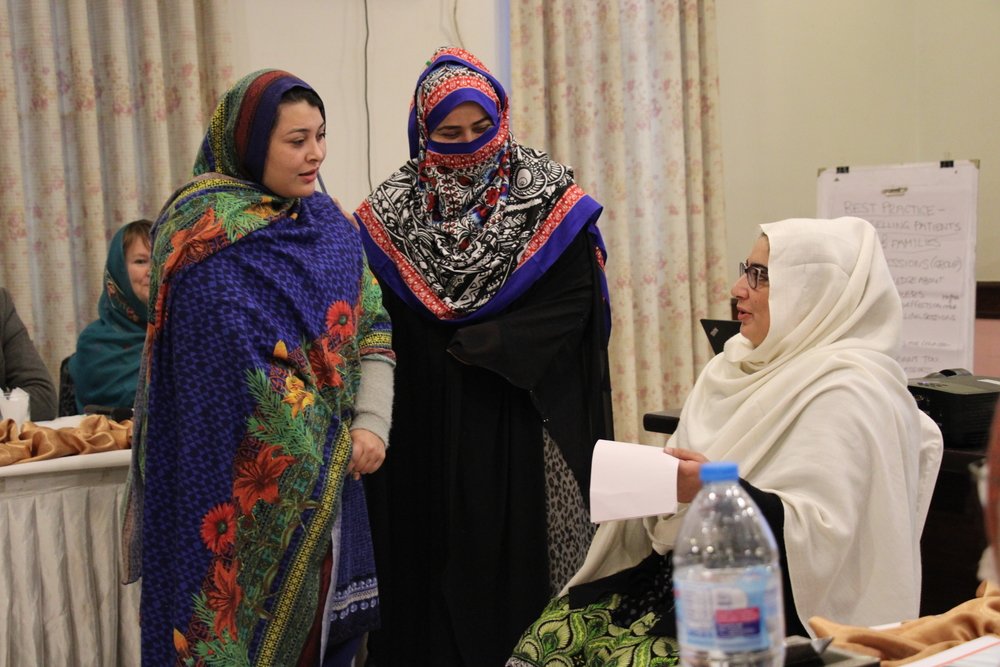 Sandra Smiley/MSF
Participants role playing at the pilot orientation session on the correct use of oxytocin in Peshawar.

With its successfully piloted training package and set of communication tools, MSF is now reaching out to national health authorities and partners in Pakistan to replicate the course on a wider scale. A series of trainings is also planned at the Timergara hospital in the near future.

MSF’s activities around the misuse of oxytocin ultimately aim to prevent tragic stories like Shazia’s and Rehana’s. “I have experienced first-hand that oxytocin is not always the best drug and should only be administered in a hospital,” Rehana tells MSF from her bed in the post-operative ward. “I now advise all my relatives to be careful with labour-inducing drugs.