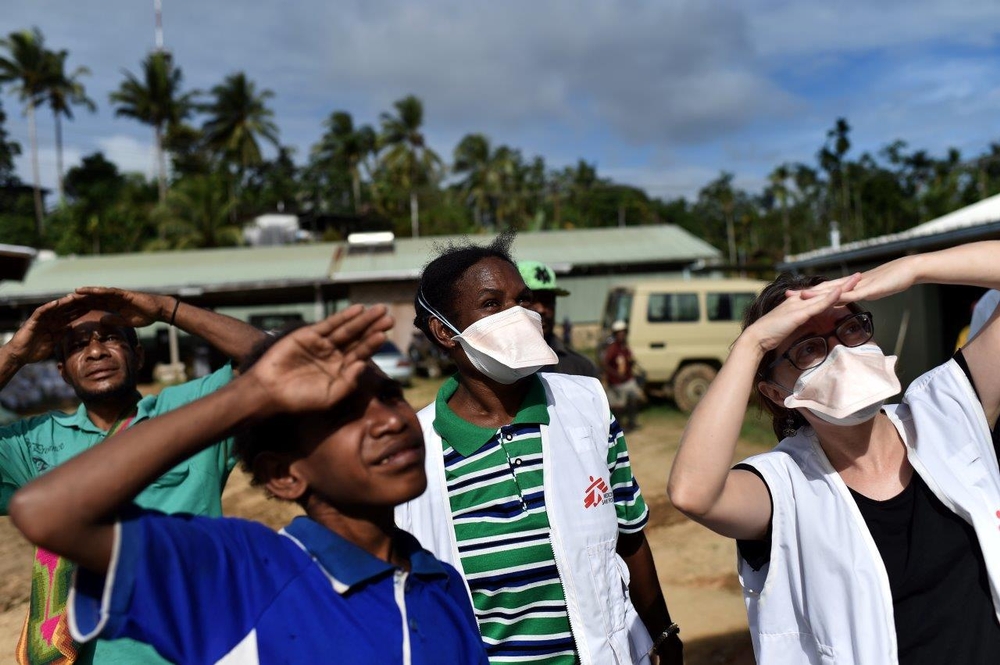 The tuberculosis (TB) prevalence in Papua New Guinea (PNG) is among the highest in the world, 541 cases/100,000 population/year, with some pockets reported to be three times higher, prompting Médecins Sans Frontières/Doctors Without Borders (MSF) to respond and reach the most affected communities.

After analysing where the greatest needs are, MSF decided to focus on the Gulf Province. This region is estimated to have very high rates of TB and possibly, a concerning rise in drug-resistant TB, along with many remote communities that have limited access to healthcare.

MSF and the local health authority started by implementing a separate TB clinic with proper infection control and patient flows.

“When MSF arrived in Kerema in mid-2014 we found that infection control in the hospital was completely out of control.” said Project Coordinator Cyrus Paye. “So we tried our best to conduct TB assessments without infecting ourselves and others”.

The team then set to work on rehabilitating some services in the Kerema general hospital, with new laboratory equipment including the GeneXpert machine to cut TB test result delays down from weeks to just 2 hours.

“The objective is to improve considerably the diagnostic capacity in order to be able to start treatment very quickly.” said Benjamin Gaudin, Head of Mission.

A new TB ward is currently under construction and will have 18 in-patient beds which will allow for the separation of TB patients from the rest of the hospitalised patients for better infection control.

The next phase of the activity would be to decentralize TB services. However geographical conditions pose a formidable barrier

The project progress has been significantly hampered by the poor condition of the roads. After months of rain the dirt road between Kerema and PNG capital Port Moresby has turned to deep clay mud in many areas. This has led to delays in construction at the hospital due to supply trucks not being able to reach Kerema.

Sean Brokenshire/MSF
The clay road is frequently impassable due to months of rain that creates a deep layer of mud. The poor condition of the roads is one of the biggest challenges that MSF faces in reaching remote communities and health centres to expand its TB programme.

It is also difficult to reach remote communities and health centres. While some villages could be reached by water, boat travel is not safe due to frequently treacherous conditions on the Coral Sea, and the presence of large saltwater crocodiles in the rivers, along with deadly snakes in the jungle. The local community is still grieving the loss of a child killed by a 4-metre crocodile in May this year near Kerema.

The difficulty in accessing the remote communities outside Kerema town led the team to think of innovative solutions. MSF and US Company Matternet trialled the use of small quadcopter Unmanned Aerial Vehicles (UAVs) to transport sputum samples of patients with suspected TB from remote health centres to Kerema general hospital for testing as well as possibly transport results and treatments back to the facilities.

ARIS MESSINIS/Matternet
A sputum sample is attached to a UAV at Malalaua health centre for air transport to the laboratory at Kerema General Hospital.

Currently the UAVs are capable of travelling at up to 60km/h with a maximum range of 28km in favourable conditions and can only carry a light payload. However it is predicted that their range will increase rapidly in the coming years as new lighter and longer-lasting batteries are developed. The UAV is able to be launched by a smartphone, with the goal that non-technical staff can operate them without assistance.

While there is still fine-tuning of the UAV system to be done during the trial phase, initial signs indicate that this may be a useful method of connecting remote health centres to otherwise inaccessible hospitals in the future.

Once the Gulf Province project is running at full capacity, there are plans to expand the programme to the national capital district of Port Moresby in 2015. The goal for MSF is to support the MoH/NTP to have an effective model or models of care in Kerema that can be replicated in other areas.

“We work closely with the authorities and stay in the line of the national strategy” said Benjamin Gaudin. “Our objective for over five years is to create a TB programme that is replicable and sustainable.”

MSF has worked in Papua New Guinea since 2009. MSF’s current projects include a Family & Sexual Violence (FSV) programme in Tari, and the National Capital District, and a TB project in the Gulf Province. Previous projects have included a FSV project in Lae, and a maternal & child health project in Bougainville.

Find out more about MSF's work in Papua New Guinea