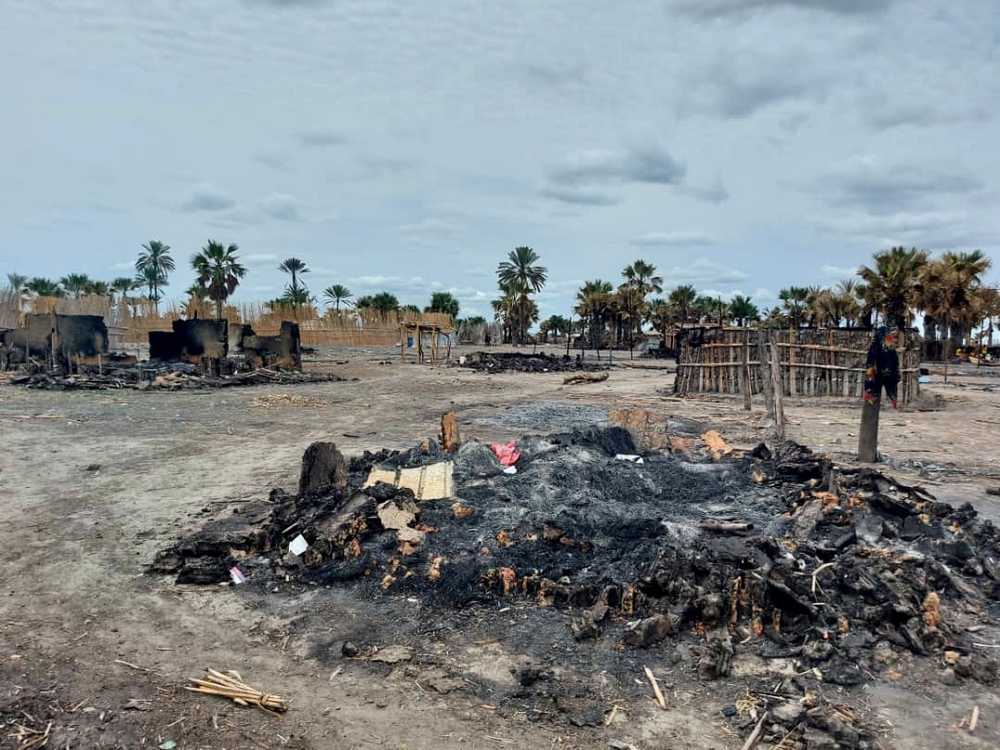 19th April, 2022- The latest violence that erupted on the 4th April 2022 in Leer County in South Sudan has resulted in the deaths of dozens of civilians, including a Médecins Sans Frontières (MSF) staff member. This is the second MSF staff member that has been killed in Leer due to extreme violence since December 2021. 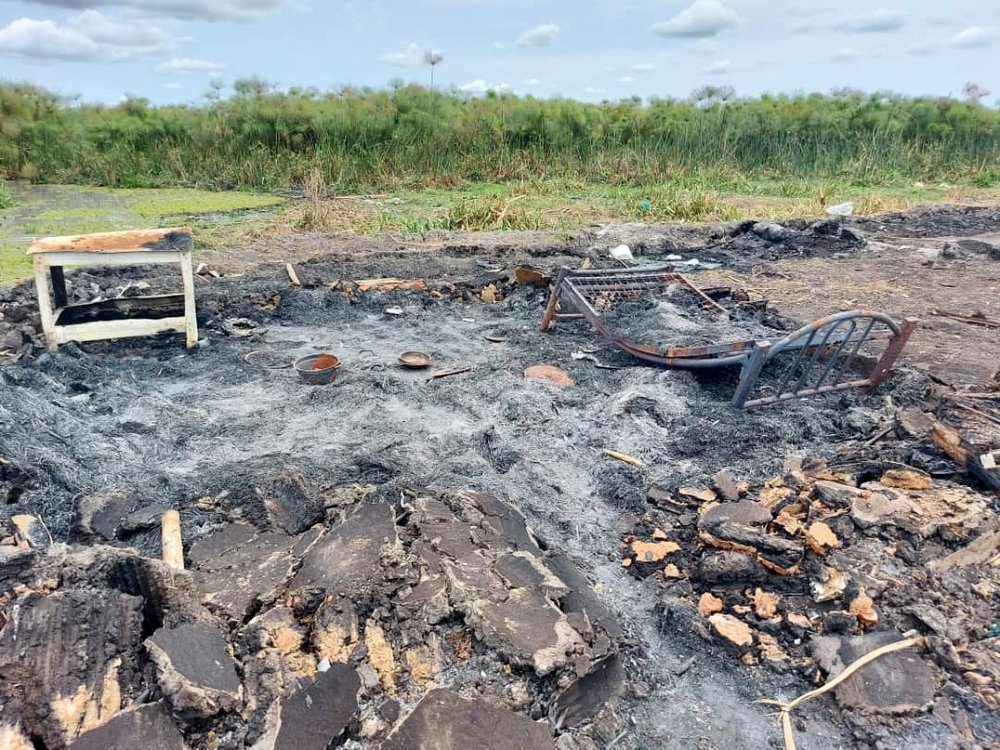 Peter Mathor Tap had been working with MSF in Leer since 2007, initially as Senior Department Supervisor at the former MSF hospital (which was destroyed twice during the civil war, once in 2014 and again in 2015), and more recently as Nursing Care Provider in one of MSF’s Community Based Health Care (CBHC) facilities. 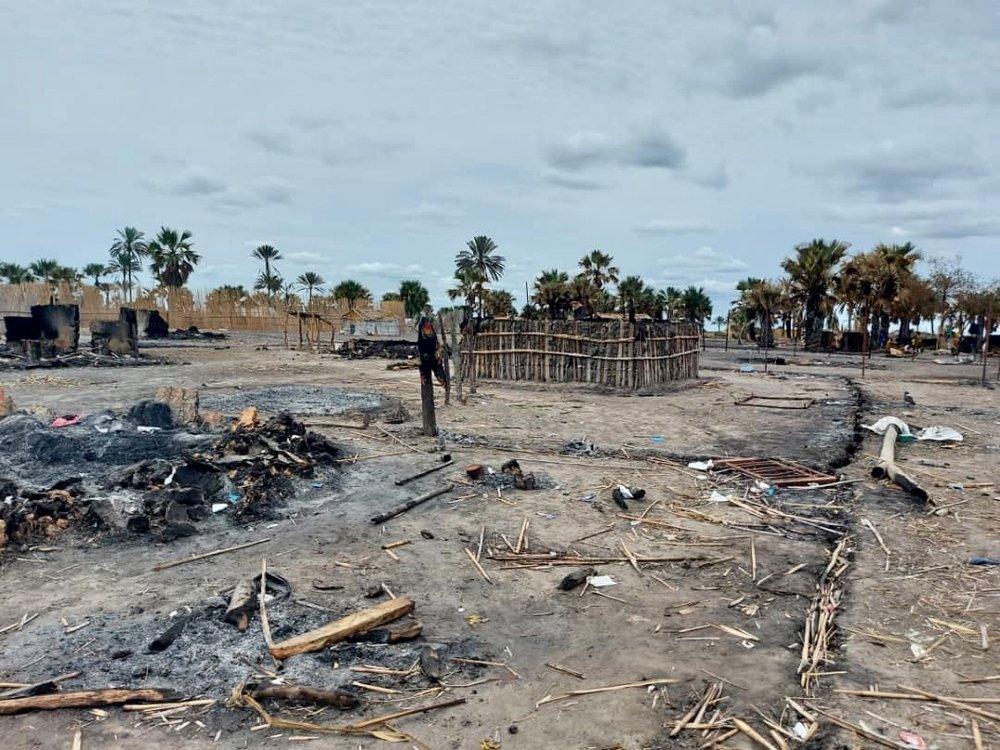 MSF/Anna Bylund
During attacks in Leer County in April 2022, armed groups destroyed villages; burning down and looting properties, causing the displacement of thousands of people. (April, 2022).

During the fighting on the 10th of April, Peter was shot and killed while he was off duty. As a child, Peter had suffered from polio, which left him with a disability and required him to use a stick to walk. This affected Peter’s ability to run away when the armed aggressors reached the area where he lived. 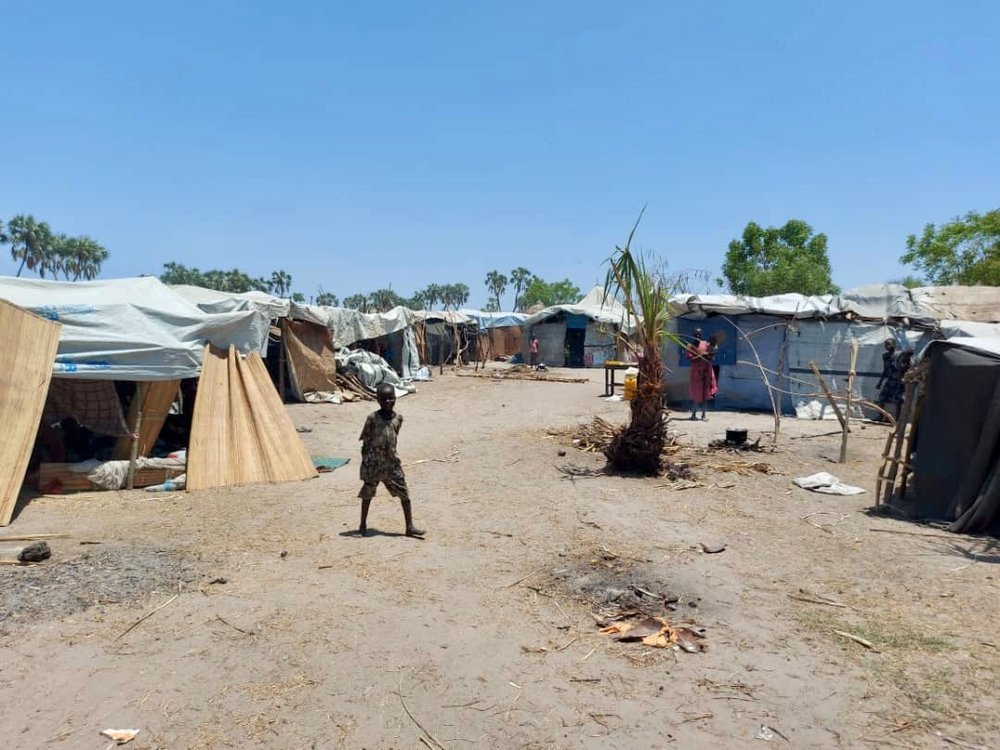 “We are shocked and profoundly saddened by the tragic death of our colleague Peter. We send our heartfelt condolences to his family and friends,” said Federica Franco, MSF Head of Mission for South Sudan. “We strongly condemn the indiscriminate violence being carried out by armed groups that have killed and injured many innocent civilians in Leer, including those most vulnerable, such as children, elderly and persons with disabilities.” 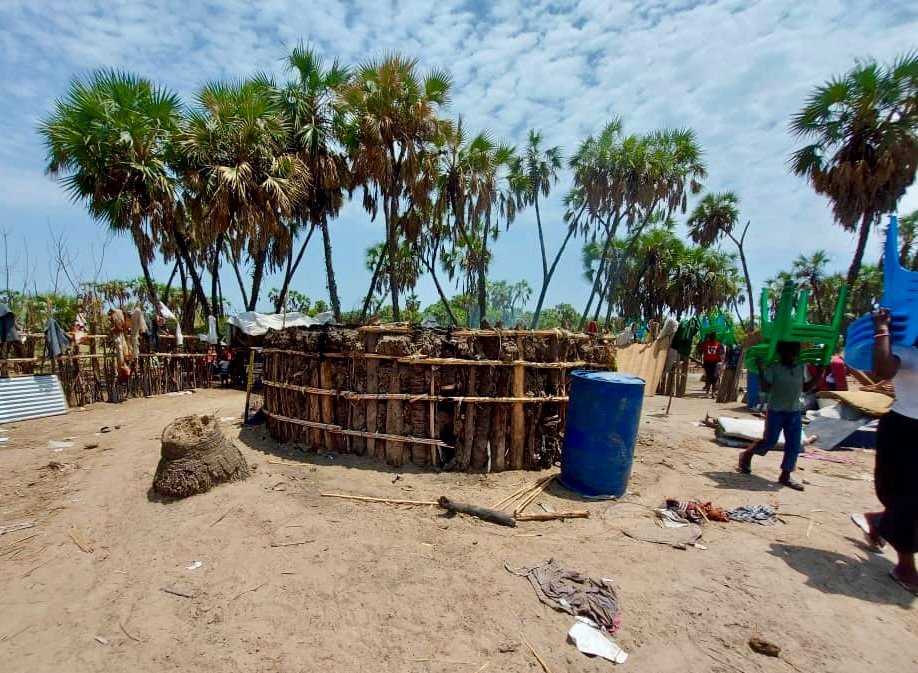 MSF
This home was set alight during the violent attacks in Leer. (April, 2022).

Since the latest fighting begun, the MSF clinic in Leer town has received more than 30 gunshot wounded, as well as several other trauma victims, including survivors of sexual violence. With the insecurity resulting in the evacuation of several humanitarian organizations in Leer, the MSF clinic has remained one of the few fully functioning healthcare facilities in the entire county, and the only facility providing advanced emergency care. 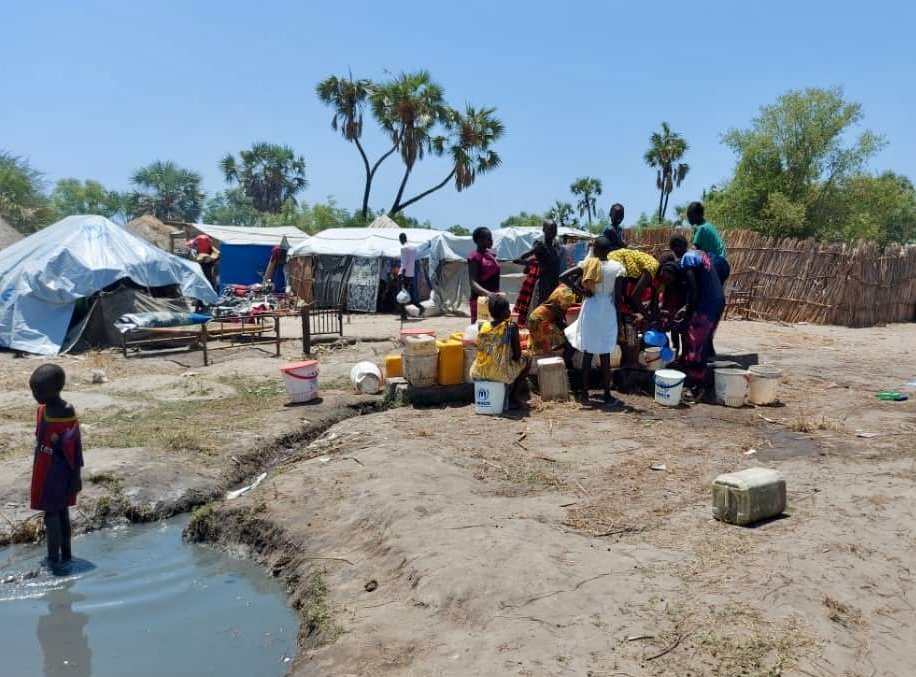 MSF
Conditions in the camps are dire, with lack of clean water and sanitation. (April, 2022).

Initial assessments report of wide scale destruction, notably in Adok, Pilleny, Thonyor and Touchria, where numerous people were killed, homes were set on fire and properties looted. As a result, thousands of people have been forcibly displaced, including MSF staff. Those displaced are too scared to return home, and with many of them having lost all their belongings, they have little to return to. Many people have sought refuge in the swamps, where they are at risk of waterborne diseases such as cholera and diarrhea as well as malaria. 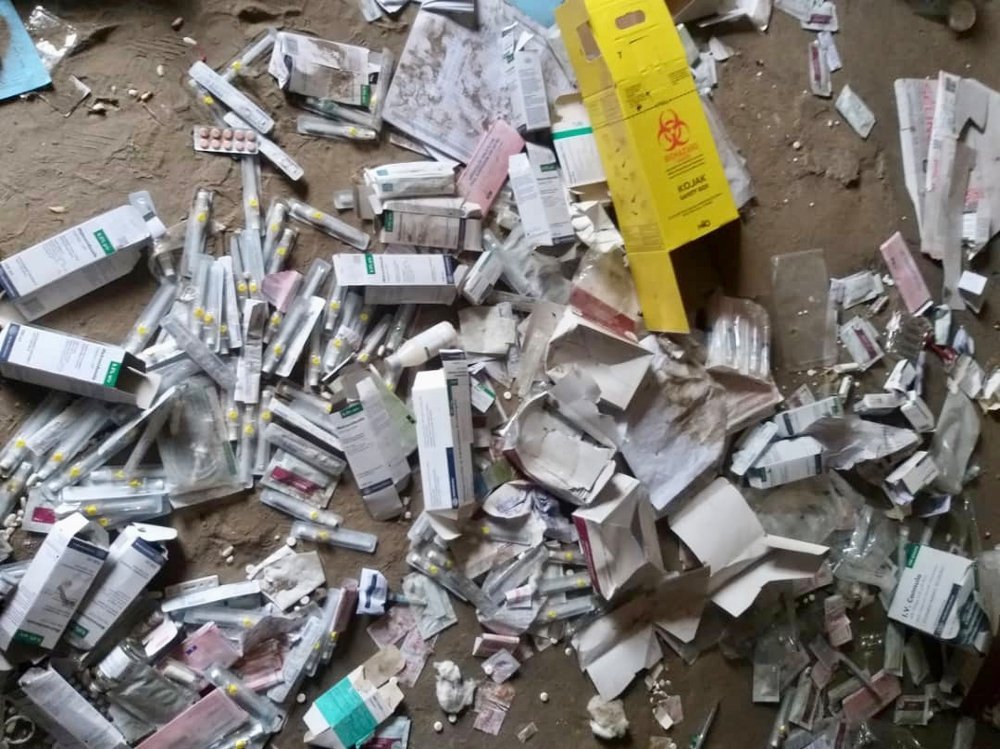 “They [attackers] were shooting and everyone ran to the swamp area because we were fleeing for our lives. People were slaughtered, including mothers, youth and young children,” exclaimed Nyadeng*, an elderly female resident of Adok. “When we came out, we found the area was burnt, they took the goats, cattle and also looted [property].”

These are challenging times for the people of Leer, who have previously experienced an endless cycle of violence and multiple displacement. Leer was one of the counties most affected during the 2013-2018 civil war, where brutal fighting took a huge toll on the community. The latest spate of attacks over the past few months has led to further death, destruction and forced displacement, as well as hindered access to aid – exacerbating an already dire humanitarian situation. 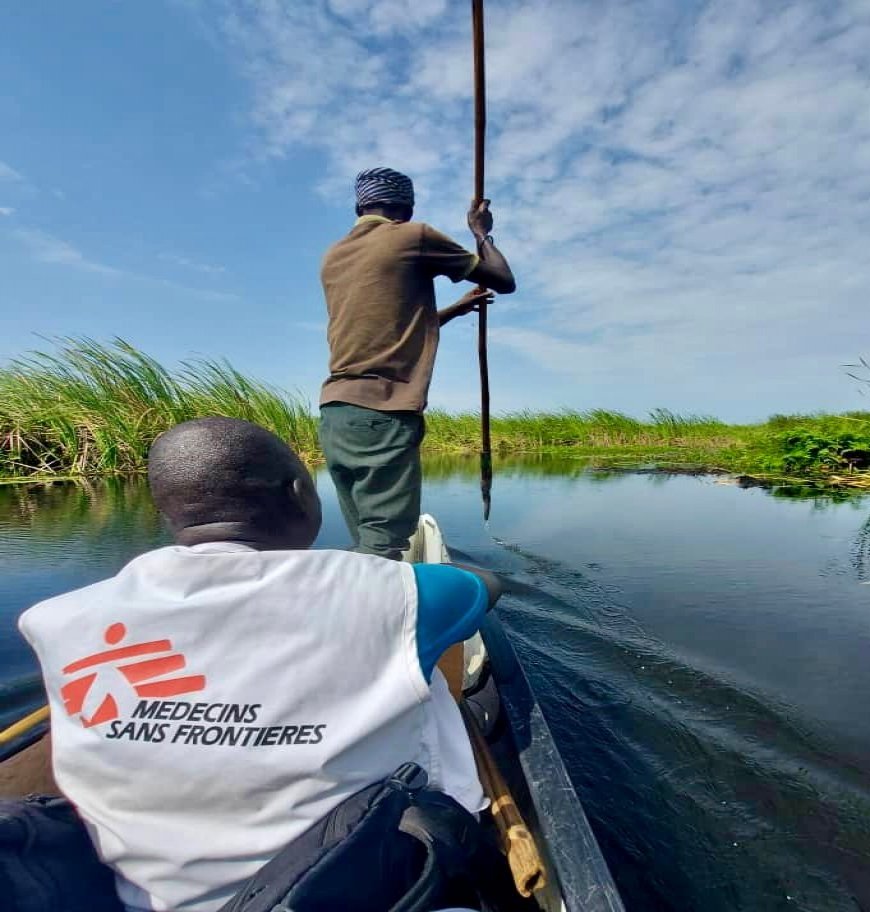 “We were hiding ourselves in the bush for five days. People are staying outside without shelter. Also, they are suffering due to hunger because they don’t have food,” said John*, a local MSF staff member who is among the people displaced in Leer. “The situation is very terrible. The people here need more support.”

The violence has also impeded the provision of vital medical services to the affected communities. Of the six CBHC facilities MSF operates in Leer County, three are now non-functional, as one facility was partially destroyed and two others were looted during these latest attacks. Despite this, MSF is continuing to ensure people can access much-needed medical care. The MSF clinic in Leer town and the three remaining CBHCs continue to operate. MSF has also begun conducting mobile clinics to the main displacement sites. 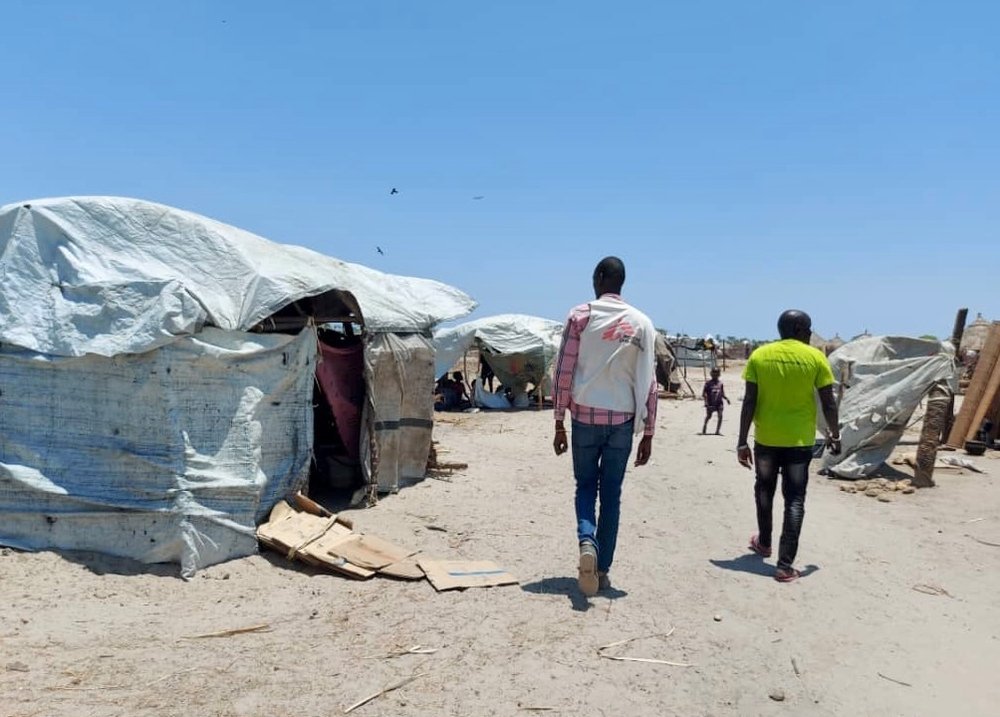 MSF/Anna Bylund
One of the largest sites where IDPs have fled is Meer Island, where MSF is providing mobile clinics to ensure access to medical care. (April, 2022).

“The level of atrocities witnessed, the persisting fear of being attacked, and the widespread destruction of medical facilities are severely affecting access to healthcare and even health seeking behaviours, as people are reluctant to travel to search for treatment,” shared Federica Franco. 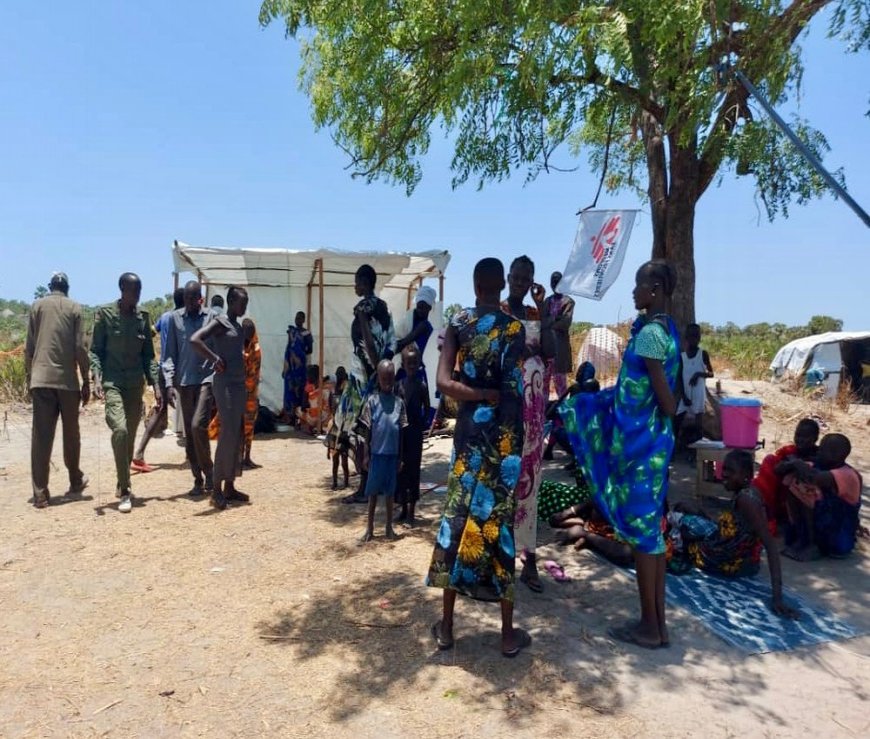 “Thousands of people displaced are in urgent need of humanitarian aid and medical care. We call on all armed groups to respect international humanitarian law and immediately cease targeting civilians and health facilities.”

*Pseudonyms have been used to protect the identity of the people interviewed.

MSF started working in Leer, Unity, in 1989 in response to a serious outbreak of kala-azar among displaced populations. Tuberculosis treatment was added to the kala-azar programs in 1993. Following the eruption of the civil war, MSF’s hospital in Leer was looted, burnt and completely destroyed in 2014. Today MSF remains one of the few organisations providing medical care to the people of Leer. MSF is responding to displaced and violence-affected populations with decentralised basic healthcare, primary healthcare services in Leer town, including emergency care, basic emergency obstetric and newborn care, and sexual and gender-based violence care, as well as community-based healthcare for hard-to-reach locations.