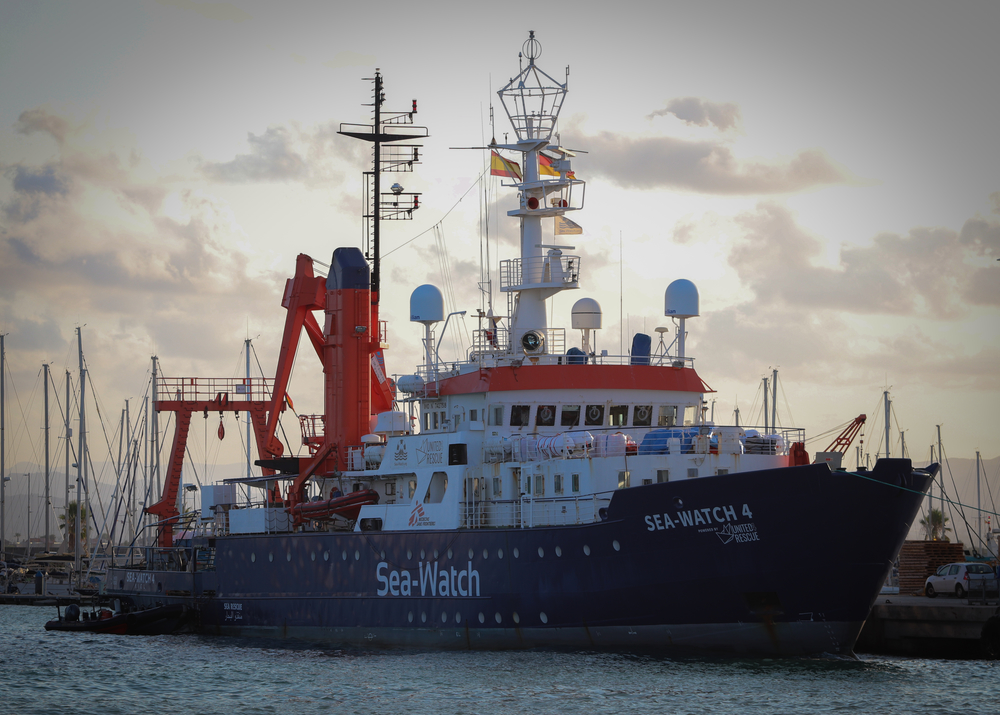 Berlin/ Burriana - Médecins Sans Frontières (MSF) is to join Sea-Watch on board the Sea-Watch 4, a new ship bound for lifesaving operations in the Central Mediterranean Sea. The collaboration has been urgently established as European member states brazenly exploit COVID-19 as an excuse to further curtail search and rescue activities, while perpetuating cycles of abuse in Libya and condemning people to drown by policies of deliberate non-assistance.

“No human being should be left to drown, to sink beneath the waves,” says Oliver Behn, MSF Director of Operations. “No human being should be forced to endure torture and suffering. Yet this is the consequence of criminal dereliction of duty by European governments. As a medical humanitarian organisation, we at MSF acknowledge the challenges presented by COVID-19; however, we see that recent state measures to discourage or block life-saving activities in Mediterranean – cloaked in public health rhetoric – are reckless and politically motivated.” 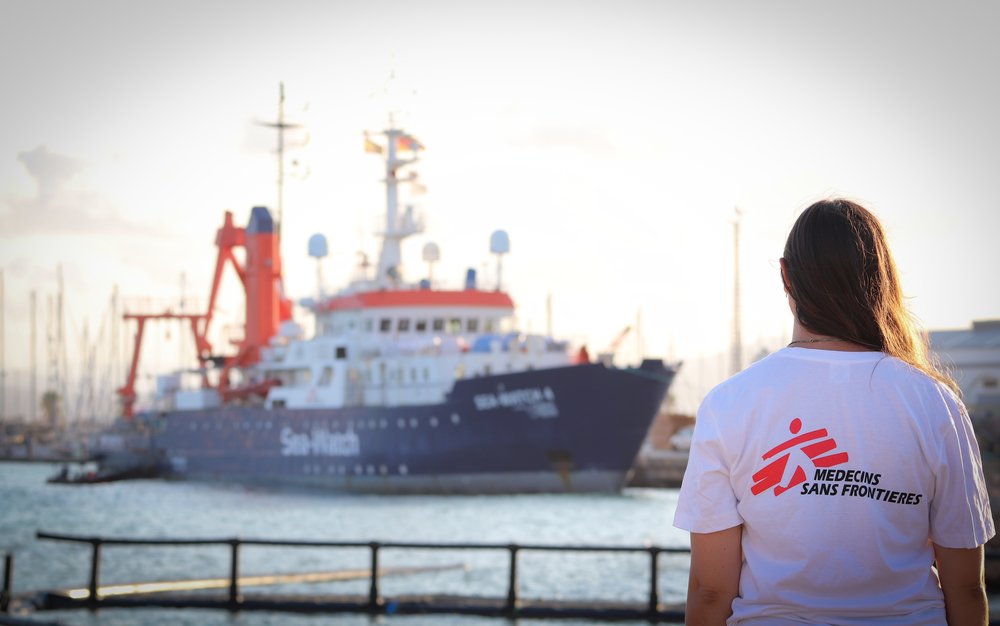 Hannah Wallace Bowman/MSF
MSF Medical Project Coordinator Barbara Deck, with the Sea-Watch 4, in the port of Burriana. MSF is set to join Sea-Watch on board the Sea-Watch 4, a new ship bound for lifesaving operations in the Central Mediterranean Sea.

“In drafting the Libyan Coast Guard, despite their questionable record, to control the borders of Europe and denying rescue to those coming from Africa, European states are sending a forceful message these lives do not matter.”

People are being left to die on the water

Over the past five months, Italy and Malta have all too often denied assistance to those in imminent danger at sea. In addition, they have closed their ports to NGO ships carrying rescued people. A deliberate and structural lack of coordination abandons people in distress at sea for hours, days, or even weeks without assistance. Libya is defined as categorically unsafe for migrants, refugees and asylum seekers by international and European institutions, including the UN, IOM and European Commission.

Yet, since the beginning of the year 5,650 people have been intercepted and forcibly returned to Libya, part of a bilateral deal financed and facilitated by the EU, while civilian search and rescue vessels - including the Sea-Watch 3 and the Ocean Viking - are systematically blocked in Italian ports on the basis of flimsy technicalities. 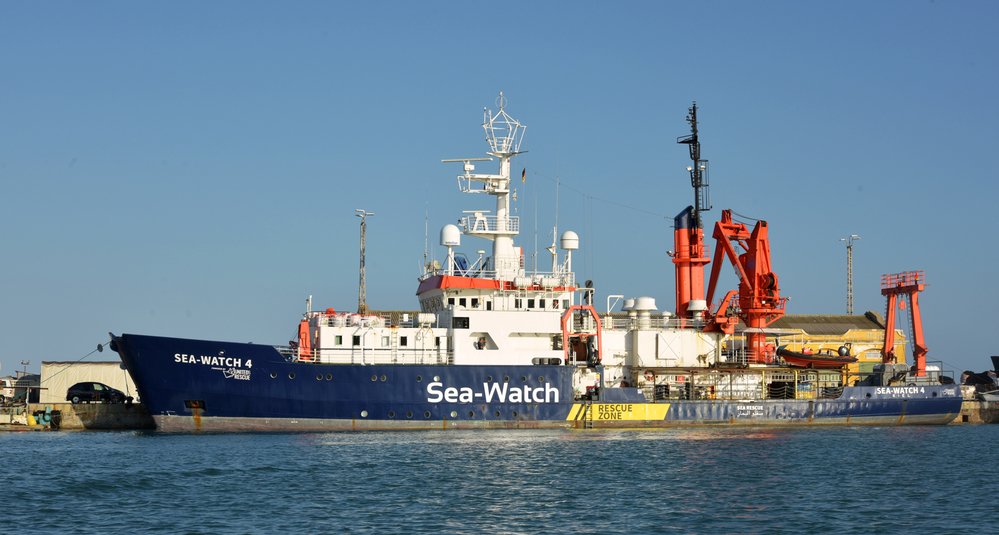 The Sea-Watch 4 in the port of Burriana, Spain, as it prepares to embark on its first lifesaving mission to the Central Mediterranean

While criminalization continues, civil sea rescue enjoys broad social support. One of these supporters is United4Rescue, with whose help the Sea-Watch 4 was purchased and is now sent into operation. Founded on the Protestant Church's initiative in Germany in December 2019, the coalition now extends far beyond church boundaries and has over 500 members.

"The Sea-Watch 4 and the broad alliance standing behind it is the civil society’s univocal response to the EU’s racist policy of rather letting people drown than reach European shores,” says Philipp Hahn, Head of Mission of Sea-Watch 4. “It is a symbol of solidarity with people on the move and a clear signal to the EU that, despite all their efforts to hinder us, we will not stop rescuing.

101 people were reported dead or missing

People are being left to die on the water, or are pushed back to the very place from which they are trying to escape, while EU border patrol aircraft watch from above, complicit in sealing their fate. As long as the EU states are letting people drown as a deterrent we will carry on, and we will have support.” 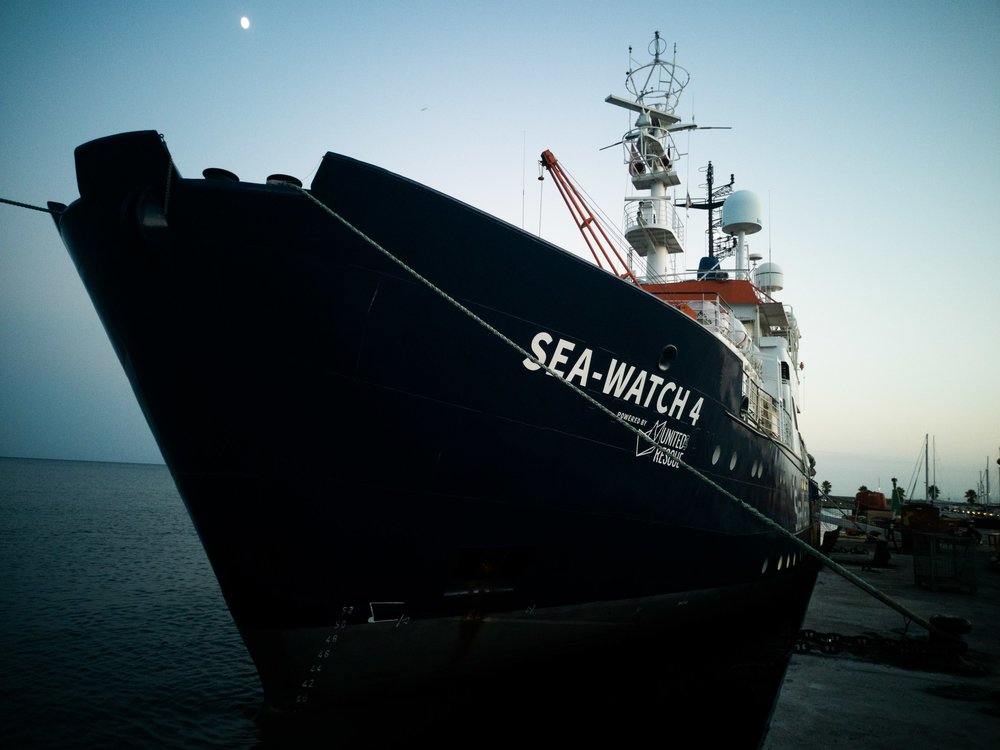 The Sea-Watch 4 in the port of Burriana, Spain, as it prepares to embark on its first lifesaving mission to the Central Mediterranean.

Many of the hundreds of people returned to captivity in Libya remain unaccounted, others are held in overcrowded conditions with poor sanitation, lack of access to food and water, and little opportunity to maintain physical distancing in the context of a global pandemic. The intensification of the conflict inside Libya earlier this year, compounded by COVID-19 put further pressure on a healthcare system already near collapse and a humanitarian emergency.

Without access to safe and legal alternatives, thousands of people attempt the deadly crossing as a last resort. Lack of search and rescue capacity does not deter people; it only makes the risks they are forced to endure, even more extreme. In June alone, at least 101 people were reported dead or missing in the Central Mediterranean – only last week 3 people were shot dead and two injured after being forcefully returned – while the number of those who tried to cross this perilous stretch in unseaworthy and fragile boats increased four-fold in comparison to the same period last year.

The former oceanographic research vessel Poseidon, now renamed Sea-Watch 4, was bought in February by Sea-Watch and the United4Rescue coalition of over 500 members, led by the Protestant Church in Germany. It has since been refitted for search and rescue operations in the central Mediterranean Sea.

On board, MSF will be responsible for delivering emergency medical care, which includes running the ship’s clinic. MSF will staff the four-person medical team, including a doctor and midwife, alongside two communications and advocacy personnel, while Sea-Watch runs the ship and the rescue operations with a partly volunteer crew of 21 people.

Together Sea-Watch and MSF will provide humanitarian assistance, such as providing food and essential items, as well as identifying people who are particularly vulnerable.

our work in the mediterranean >