Search and rescue: "All he wanted was to escape, no matter the likelihood of drowning"

Ilina Angelova was humanitarian affairs officer for MSF on board the search and rescue ship Sea-Watch 4 in August and September. She heard numerous accounts from survivors about their experiences – in their countries of origin, on their journeys across the Sahara, in Libya and at sea.

Patrick told me how he was held in captivity in Libya. One day he was taken by his captors to work in a compound owned by the commander of an armed group. The compound was close to a big road in the centre of a city, hidden behind a tall concrete wall so that no one could know what was happening inside.

Patrick – alongside other refugees and migrants – was forced to work on the commander’s house. There was one rule: they were not allowed to speak, cough or make any noise at all. Anybody who broke this rule was shot.

Of the many accounts people shared with me, this is the one I find hardest to forget. I can imagine the busy road and the city full of life, while behind a tall, impenetrable wall a group of voiceless, terrified men work in complete silence, hidden from the rest of the world, afraid they could lose their lives at any moment.

Hearing his story, I can understand why he got on the flimsy rubber dinghy in the middle of the night. All he wanted was to escape, at any cost, in any way possible – no matter the likelihood of capsizing and drowning. The fate of the more than 473 people who have lost their lives in the Central Mediterranean this year was not enough to deter him. Nor was the fact that he could not swim. 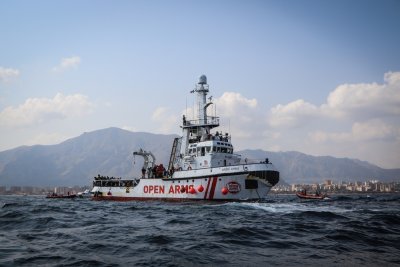 The Sea-Watch 4 was close by, at anchor outside the port of Palermo, and immediately responded by launching three RHIBs to provide assistance.

For the 354 people we rescued, the hours and days they spent at the mercy of the waves, in unstable, overcrowded boats, in the punishing heat of the August sun – and through the cold dark hours of the night – pushed many to the edge.

What they had been through was immediately visible. People arrived on deck at the end of their strength, struggling to stay on their feet or take a few small steps.

Seasick and dehydrated, some immediately collapsed from exhaustion and were unable to get up or even lift a spoonful of rice for several hours.

I spoke to a teenager whose foot was marked with a bullet wound; he was shot by a sniper while walking to get food and then refused treatment at hospital because he was a Black African

At least 150 of the survivors had endured three days and nights in a rubber dinghy with a broken engine with no food or water. Many had spent hours sitting in a dangerous and corrosive mixture of gasoline and salt water, which caused severe and extremely painful chemical burns on their skin.

Most people I spoke to in these first minutes could not even remember their age or nationality. As I asked them the question again, in another language, I was often met with a look of stunned silence. It spoke to the trauma louder than words. 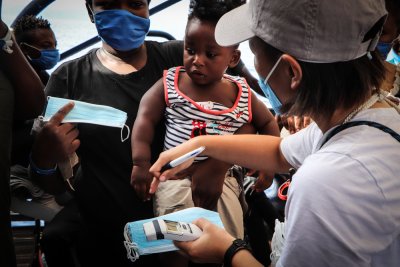 MSF/Hannah Wallace Bowman
Midwife Marina takes the temperature of people on deck of the Sea-Watch 4.

The frantic hours of the rescue operations eventually subsided, to be replaced by another set of pressing imperatives: the distribution of food, clothes and hygiene items, the provision of medical care for non-emergency cases, and the assessment of vulnerabilities and needs.

As people regained some strength and felt safe enough to do so, they came to me and insisted I listen to their experiences.

I met a young man with shrapnel still left in his body, the result of an explosion in Tripoli that killed his father and younger sister. I spoke to a teenager whose foot was marked with a bullet wound; he was shot by a sniper while walking to get food and then refused treatment at hospital because he was a Black African. I sat with a mother too afraid to let her toddler stray more than a few metres away after witnessing armed men burying other women’s babies alive in the sand.

John told me that he was doing construction work at a house one day when he accidentally broke a window. The owner of the house called his employer and asked for compensation of 500 Libyan dinars (approximately €300). 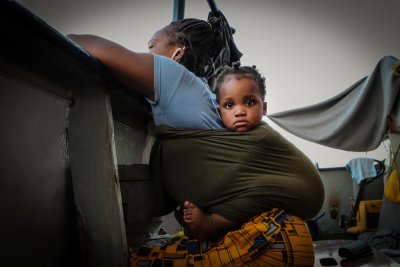 MSF/Hannah Wallace Bowman
A mum and baby look towards the shore of Sicily as they prepare to disembark from the Sea-Watch 4 following their rescue in August 2020.

The man overheard his employer’s response: “This African is not worth 500 dinars; do whatever you want with him.” And that is what happened.

The owner made another phone call and, a few hours later, the man was imprisoned for three months. He told me he was beaten, tortured and electrocuted every day.

He showed me one of his fingers which was completely disfigured from the physical abuse. All because of one broken window.

The list goes on. And on. Except it is less a list than a macabre catalogue of shameful, inexcusable acts of brutality and discrimination. Every scar, every dog bite, every disfigured and incapacitated limb serves to map the many points during their journeys at which humanity had been assailed. These are the tales of human life devalued.

We waited for authorities to assign a Place of Safety to Sea-Watch 4 for 11 days. It was devastating to see how the deliberate delay to allowing people to disembark was causing intense, unnecessary suffering for those we had rescued.

After a week, one woman came to me distraught. She grabbed my hands and asked me in a pleading, panicked voice if we were going to take them back to Libya. The absence in her eyes, normally full of empathy and warmth, told me that in her mind she was back there, in the place she had been trying to run from. She kept asking me the same question every day, many times a day, with growing urgency and apprehension:

“Tell me. Tell me! Are you going to take us back?”

Some of the unaccompanied children and teenagers lost their ability to sleep, triggered by the disquiet on board and the lack of prospects for a swift resolution. The youngest lost their appetites and stopped eating, which started to become a cause of concern for the medics. The delay was taking a toll.

As exhausted and anxious as they seemed during those difficult days, it was moving to see how people maintained their polite, caring demeanour towards the crew. The combination of round-the-clock work on deck in the scorching heat and taxing night-watch shifts had started to drain our faces of colour, leaving a depleted look that – even under layers of PPE (personal protective equipment) – was difficult to hide. 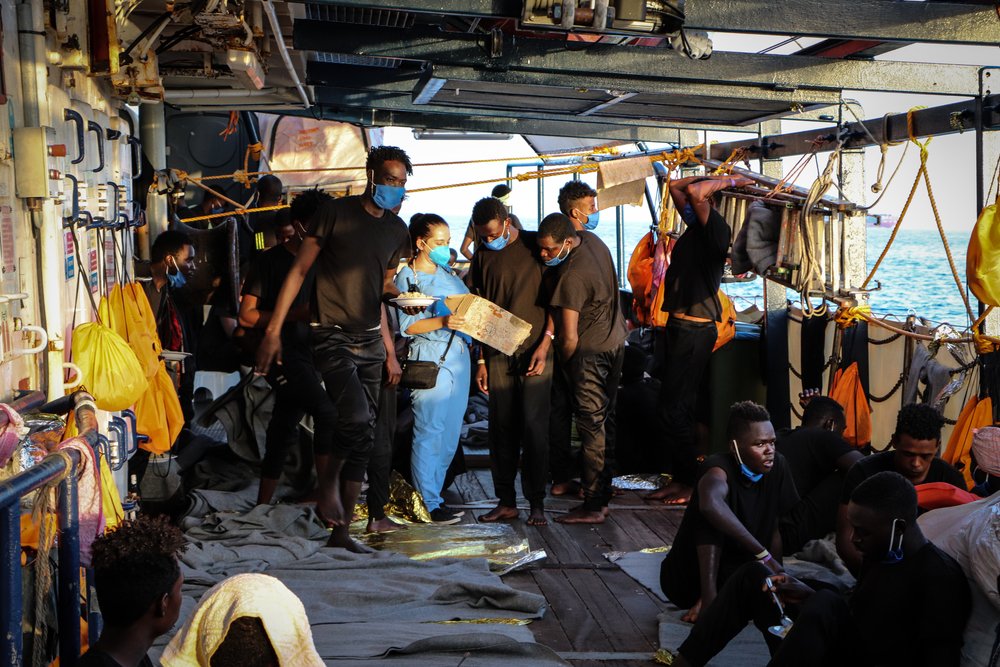 Rescued people kept offering to help with our tasks on deck, telling us to get some rest, asking if we were doing all right. Before eating, many would first inquire if we had already had a meal and repeatedly invited us to share their food.

Those moments of camaraderie and human solidarity, and the many considerate and selfless gestures, with which the rescued people took care of each other – and of us – restored a sense of hope and defiance on board, even in the bleakest of days.

On the eleventh day after the first rescue, we finally received the news that brought much-needed comfort and relief: Italian authorities had instructed Sea-Watch 4 to go to Palermo in Sicily, where the people would be transferred to a quarantine ship.

People started leaving, one by one. Because of COVID-19 prevention measures, we were unable to hug them or give a handshake, so we saluted them with silhouette hearts with our hands and waved goodbye. They waved back as they stepped off the ship and onto the ferry, having arrived, after months and years of profound adversity, in Europe.

I recognise the inconceivably high price they paid to reach this place. The months or years of exploitation, the parents, children and relatives lost along the way, the friends that were left behind or drowned, and the darkest moments of being completely abandoned, of being denied compassion and assistance. 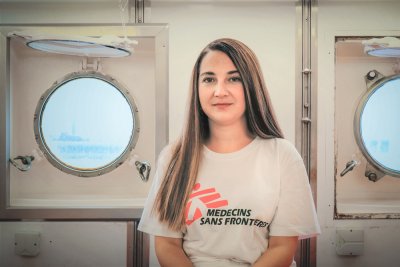 I remember all the moments with the rescued people with more gratitude and admiration for their resilience, patience and kindness – to me and my colleagues – than I ever managed to express.

In the last minutes we spent together, there were final words of gratitude and encouragement. Some people asked us to keep saving lives at sea, to make sure that no one was left behind.

We wanted to say that we would, but we knew that this was a promise we could not stand behind, that the fate of our ship was foretold. And that once we entered Italy there was little chance we would be allowed to leave again.

We were right. Fifteen days after the rescued people disembarked, Sea-Watch 4 was placed under an administrative block. The technicalities used as grounds for detention served to provide a veneer of legality to the politically motivated decision to block a fifth lifesaving asset from the Central Mediterranean in the past five months.

As I sit here now, prevented from doing my job at sea, I think of those we did not, will not, have the chance to rescue. I think of what it takes to risk your life for the chance of a secure, normal and dignified existence. I think of these people I will likely never meet and hope they too defy the odds that Europe has stacked against them and somehow make it to safety.

I remember all those still trapped in Libya, held behind the tall and impassable wall that is now the Central Mediterranean. Hidden out of sight and forced into complete silence – just like the men in Patrick’s compound –

tens of thousands of people continue to bear inhuman brutality, cruelty and injustice every single day, as Europe closes its ears and looks the other way.