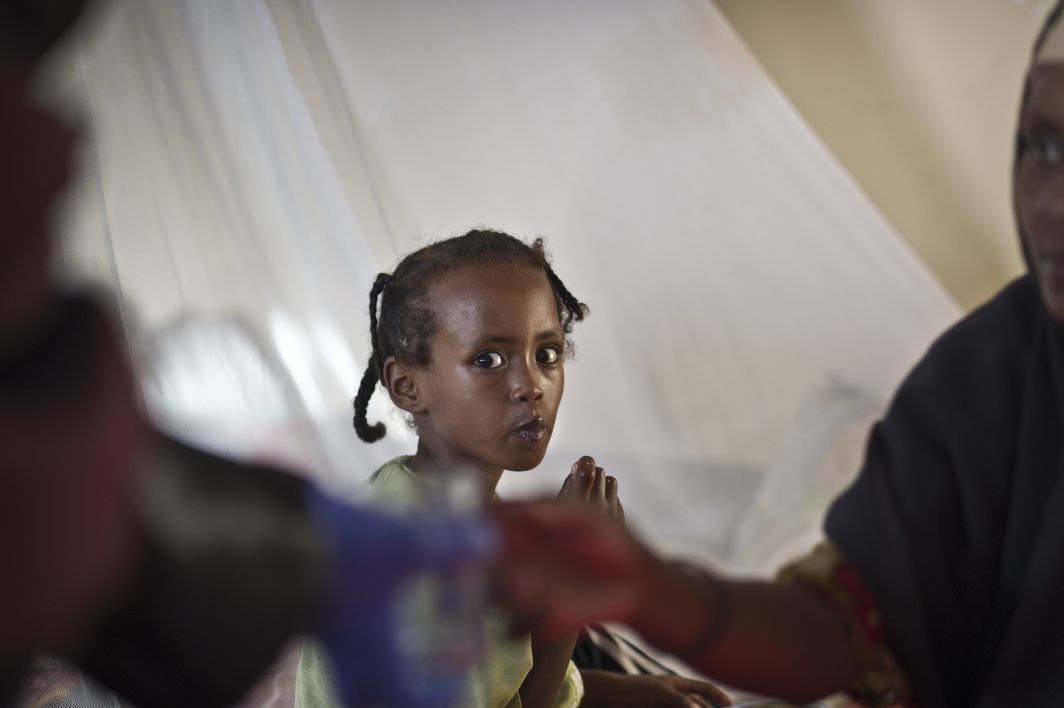 Measles. It starts with a fever, runny nose and a cough. Then a rash. For children who are not immunised this often spells disaster.

Today, in Somalia measles is among the biggest threats to the survival of tens of thousands of vulnerable malnourished children when the disease sweeps quickly through overcrowded displacement camps where malnutrition levels are high and immunity low.

“Measles is an airborne infection and conditions in overcrowded camps create the ‘perfect storm’ for outbreaks. Malnourished children under five years old are the most susceptible. They get caught in a vicious circle where measles and malnutrition wear down their weakened bodies’ defenses which can push them over the edge with complications like pneumonia and diarrhoea. The first priority in such emergencies is to vaccinate against measles and to rapidly treat all the cases you can identify,” MSF nutritionist Dr Susan Shepherd says.

MSF projects around Somalia have detected a steady number of measles cases, 3,049 cases so far since January this year, and before the onset of the nutrition crisis there was marked increase. Between May and September a total of 2,132 cases were reported – 70% of the year’s caseload in just four months.

In Hodan district, where MSF operates one of three ITFCs in Mogadishu, over 50% of the severely malnourished children cared for here have measles too. These children are isolated from other children in the ward to prevent the spread of disease.

MSF teams in southern Somalia have also witnessed measles outbreaks in Marere where they are working to treat and contain the spread while all MSF projects in Mogadishu have reported measles cases – whether in therapeutic feeding programmes or through outpatient services. For MSF it is vital that from first contact with outreach teams who detect patients with measles symptoms, they are quickly referred for treatment aimed at preventing complications such as respiratory infections from setting in.

Somalia’s legacy of war, internecine conflict, lack of development and a collapsed health system means that level of routine immunisation coverage is extremely low – the World Health Organisation puts it about 30%. This is a particular concern as MSF facilities are treating measles in older children and adults, when outreach teams find them.

MSF has already vaccinated over 50,000 children against measles since July this year despite difficulties, constraints and concerns for the safety of medical staff, mostly through outreach activities and small-scale immunizations.
Implementing mass vaccinations, the first choice to fight outbreaks, is not easy in an insecure environment like Somalia. Several vaccination teams are needed and one typical team can consist of up to 10 people who need to be recruited, trained, equipped and deployed which implies a lot of logistics support – including vital cold chain management.

To do this in Somalia today is complicated. MSF has to undertake time consuming negotiations with local leaders, authorities and even armed groups, who control certain parts of central and southern Somalia, to allow vaccination campaigns which could save thousands of lives. But it doesn’t end there. Negotiations also often have to extend to simpler things like hiring people and vehicles in a one of the most difficult places in the world to bring medical humanitarian assistance.

MSF has worked continuously in Somalia since 1991 and currently provides free medical care in eight regions. Over 1,400 Somali staff, supported by approximately 100 staff in Nairobi, provide free primary healthcare, surgery, treatment for malnutrition, as well as support to displaced people through health care, water supply and relief items distributions in nine locations in South- and Central-Somalia. MSF is also providing medical care to Somali refugees in Kenya and Ethiopia.