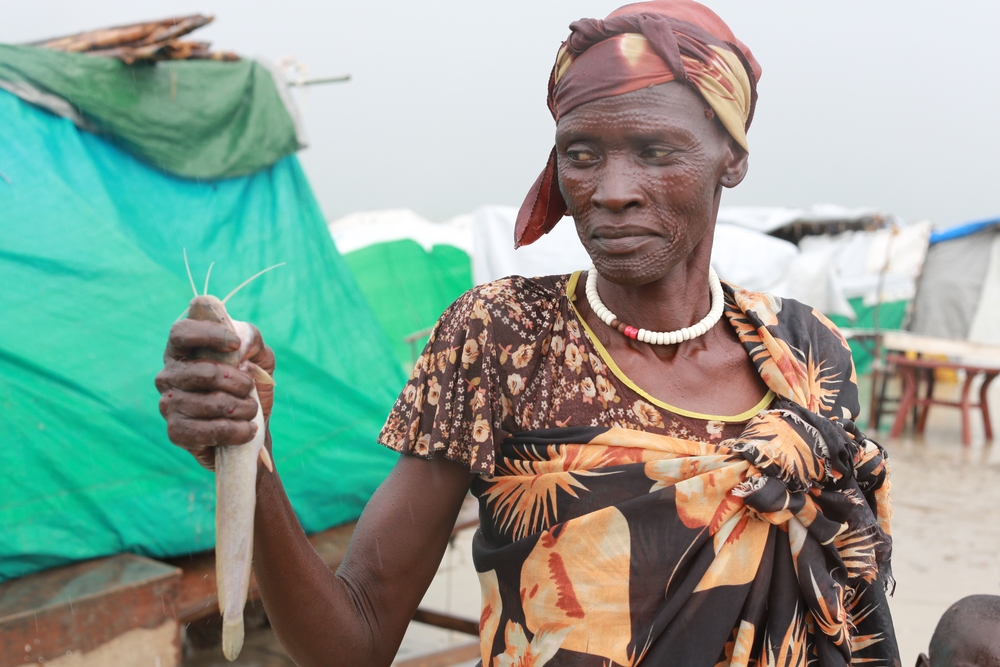 Tens of thousands of people have taken refuge in a camp near Bentiu, one of several “Protection of Civilian” camps managed by the UN's mission in South Sudan (UNMISS) and set up spontaneously after violence swept across the country last December.

Located in one of the world’s largest swamps, for much of August people were living knee-deep in floodwater contaminated with raw sewage. Many slept standing up, their children in their arms. Those venturing outside the confines of the camp and into the conflict zone risked violence and rape at the hands of armed men. Vanessa Cramond, MSF’s Emergency Manager, describes the situation now that the floodwaters are receding.

Daily life in a displacement camp

Within the UN ‘protection of civilians’ site, we’ve seen a significant reduction in water levels after a two-km drainage canal was completed and drainage systems were improved. There are still flooded areas, but most people’s shelters are now dry. Road access within the camp has also vastly improved and people are pleased.

Behind the barbed wire, daily life goes on. People are busy trying to secure their shelters by building mud walls and small ditches. Soil was selling for five South Sudanese pounds (around $1) a wheelbarrow to people wanting to raise the floor in their shelter, but now it’s been made freely available by UNMISS troops as a by-product of the excavation.

Concerns for safety of women and children

In general, there seems to be less harassment of women and children who venture outside the protected area in search of charcoal or firewood to cook their daily ration of lentils or sorghum. In addition to guarding the camp itself, UNMISS troops are now running “firewood patrols” three times a day along the main route from the camp into town about 5km away. Some women have set up little businesses inside the camp selling the extra wood to others who are too scared to venture outside. This has allowed them to generate some income. However, MSF still has some concerns about the safety of women and children beyond the walls of the protected area and continues to monitor the situation closely.

Recently we’ve seen people return to the camp with fresh guavas, papayas, lemons and okra that they’ve collected from the gardens of abandoned huts around Bentiu town. On occasion, there has even been some fish available that has been caught somewhere on the outside. Despite this, the surrounding area remains heavily militarized and the situation is tense. In the town itself, abandoned NGO offices have been taken over by armed men, most shops and markets are closed, schools have been turned into brothels or breweries. Boy children in oversized uniforms, armed with shiny new assault rifles, are a common sight.

We’re concerned about civilians who live outside the camp and cannot access our services. To this end we recently set up an outreach clinic in Bentiu town itself. From now on, an MSF team have a regular presence  in the looted former hospital building in an attempt to reach any women and children remaining in the villages immediately surrounding the town and provide them with primary healthcare services.

We remain vigilant about disease outbreaks, the crowded camp environment poses risks to young children especially for communicable diseases such as measles. Over the last few months, several children have died from complications related to measles infections, so last week MSF with support of other health actors carried out a vaccination campaign and immunized more than 14,200 children both inside and outside the camp. We screened for malnutrition and observed positive signs of improvement among the children we encountered.

Six weeks ago, 7% of the children we screened (by measuring their mid-upper arm circumference, MUAC) were severely malnourished. That’s now reduced to 1.3%. We believe the improvement is down to the provision of clean drinking water and improved healthcare and nutrition services within the camp together with the regular general food distributions. It’s encouraging that over the last 3 weeks we have not had any deaths in the  MSF hospital attributed to malnutrition.

But for all the improvements, we remain cautious. We’re still in the rainy season and, with the next heavy downpour, the flood water may return. This low-lying area is really not sustainable for people to live on. And when the rainy season ends, there could be problems providing clean water to people living in the camp. With no political solution to the crisis in sight, the people here face an uncertain future.

MSF teams are providing healthcare to 40,000 people sheltering in the UN ‘protection of civilians’ site near Bentiu, a town in South Sudan’s Unity state, one of the areas most affected by conflict. At present, MSF runs a hospital within the camp with maternity, paediatric and tuberculosis wards. There’s also an emergency department and surgical care.