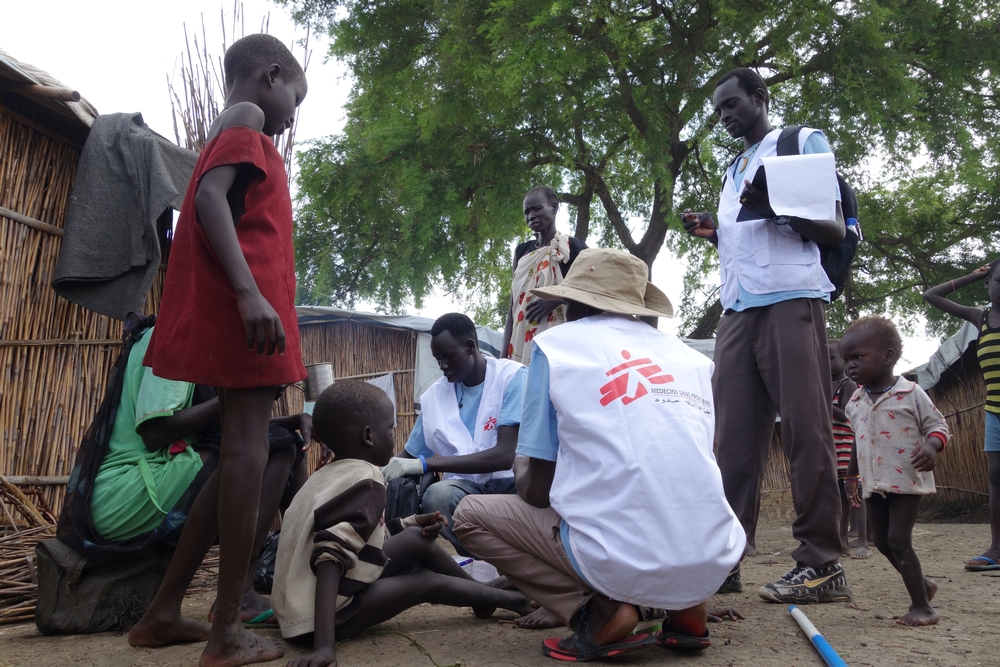 It is 7:30 in the morning and Paulino watches as four white Land Cruisers pull into the UN Protection of Civilians Site (PoC) in Bentiu, South Sudan.

He’s one of 210 community health workers congregated next to a Médecins Sans Frontières (MSF) clinic inside the crowded displaced persons camp, ready to respond to a devastating outbreak of malaria.

The population of the Bentiu PoC has more than doubled since May, when an upsurge in fighting and violence forced tens of thousands of people from their homes.

Those who made it here are relatively safe from violence outside, but diseases and illness have cost countless lives inside the camp over the last year. The present outbreak of malaria is taking a particularly devastating toll.

Across the PoC, MSF has been treating up to 4,000 malaria patients weekly at its healthcare facilities and has seen at least three to four people dying from malaria every day. Most of them are children.

Unloading the Land Cruisers, Paulino and the rest of the outreach health workers hope to prevent some of those deaths by taking the fight against malaria to the household level.

Separating into 70 groups, each team stuffs matching black backpacks with boxes of anti-malarial drugs and a few handfuls of PlumpyNut sachets – a peanut butter based therapeutic food. Shouldering one of the bags, Paulino and his colleagues stride into a nearby block of homes.

The flat, rectangular camp is strangely symmetrical. Straight canals filled with murky drainage water divide it into a series of square-shaped neighbourhoods packed with rows and columns of small, tarp-roofed shelters. 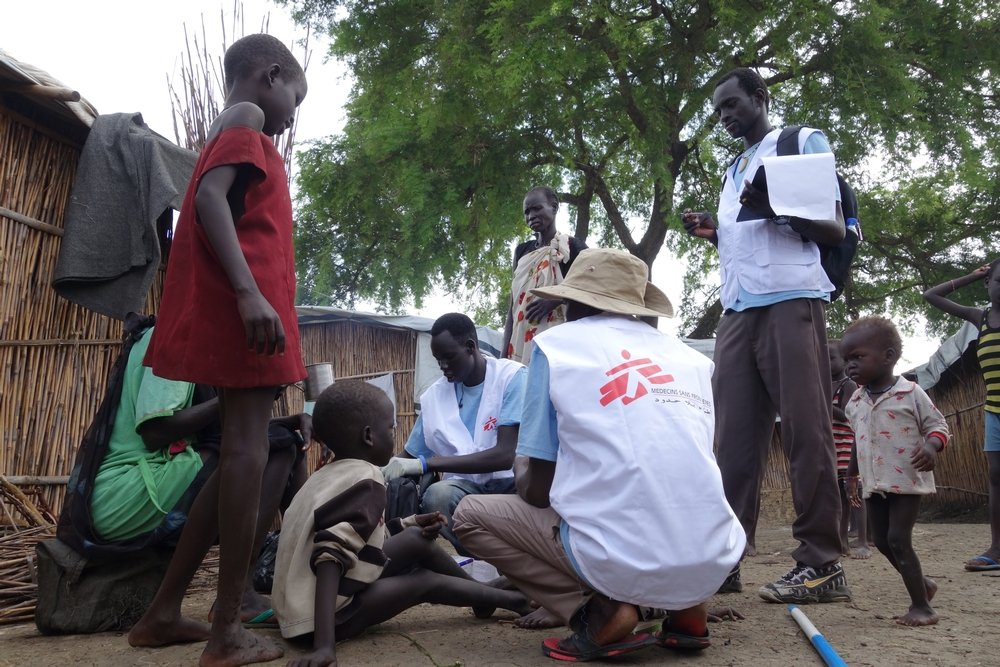 Each shelter is home to anywhere from five to a dozen people. For four days already, Paulino has been going house-to-house, talking to parents and caregivers, identifying and treating children presumed to be sick with malaria.

There are few landmarks, and even less shade from the sun, but Paulino easily navigates the gridwork of displaced humanity. He knows the camp well because he lives here too, having also fled his home because of fighting months ago.

When he arrives at his designated section of homes, Paulino walks up to the corner shelter, about nine meters square, and calls out kindly to a woman who’s huddled over a cook fire inside, surrounded by five children.

“We are here with MSF and UNICEF because of the malaria outbreak,” Paulino says in his native language.

He explains that teams like his are checking children under five years old to provide timely access to malaria treatment before the infection becomes life-threateningly severe.

The woman nods knowingly – almost everyone in the camp has several friends or family members who’ve suffered from malaria in recent weeks, and most know at least one person who’s died.

Increased nutrition and provision of medicine

As the children filter out the door, Paulino squats to their level and greets them, measuring their height with a stick to approximate their age. He touches their foreheads to test for fever and asks the mother whether any of them have been sick in the last few days, but have not received medical attention.

Two of the five children meet the criteria, and Paulino’s UNICEF colleague Gabriel takes an anti-malarial tablet from his bag, crushes it in a teaspoon and mixes in a small portion of therapeutic food. 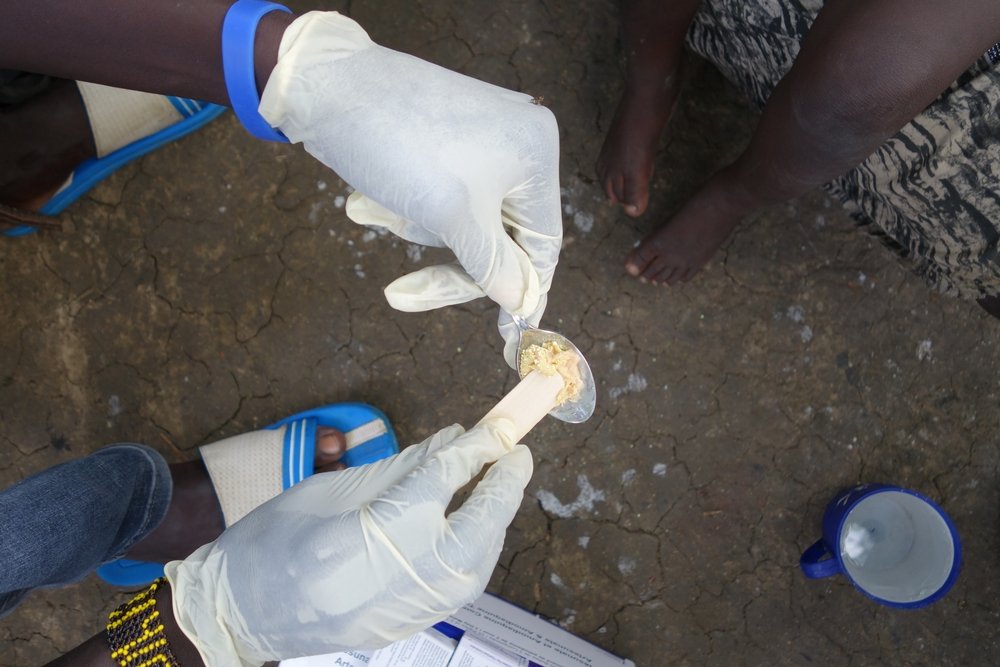 MSF/Jacob Kuehn
For the younger children, Paulino's team crushed the artisunate pills and mixes the powder with a ready-to-use therapeutic food, to help them take their medicine

“They like PlumpyNut, so we use it to help them to take the medicine,” explains Paulino, as he serves the paste to the youngest patient.

They repeat the process for the other child and then Paulino explains to the mother how to complete the three-day treatment regimen for her two children, handing her enough pills to ensure the treatment eliminates the malaria infection.

Paulino and his team continue in this way for hours, spending about 10 minutes at each home before moving to the next.

Back at the MSF clinic where Paulino’s team started their day, it’s now high noon and the hot South Sudanese sun is blasting down on a young boy being carried into the canvas structure over his mother’s shoulder.

The child’s name is Mut and his body is desperately hot, running a fever of almost 40 degrees Celsius. Inside, an MSF nurse pricks the boy’s finger and confirms the malaria diagnosis with a rapid test.

She attends to the boy, giving him pain medication and his first dose of antimalarial medication and laying him down to rest in the shade on the tarp floor beside his mother, Nyapar.

“All my children have had malaria recently,” says Nyapar, explaining that when she brought Mut to the clinic she was terrified he would die.

She’s been living in the protection camp for over a year and a half since fleeing her village with her children, travelling only at night to avoid armed groups which she says were attacking civilians and raping women. Now that she lives in the PoC, she earns money by making long treks outside the camp to gather firewood for sale, a dangerous job that takes her away from the relative security of the camps.

The money helps support her kids, but it’s a difficult existence. A few years ago, she had a husband and six children. Now, she is a single mother of three. They all died of disease.

Thankfully for Nyapar, her son Mut quickly show signs of improvement as his fever drops by two degrees within a couple of hours. With any luck, he’ll be better soon.

But a couple kilometers away, at the MSF hospital located on the outskirts of the camp, many children are in far worse condition. The hospital is a network of tents, each filled with up to twenty hospital beds filled with patients, sometimes two children in a single bed.

At one end of the facility, the maternity ward is packed with mothers who’ve recently welcomed a new child into their families. A few tents away, the intensive care unit is filled with mothers fearing they’ll lose one.

In the intensive care ward, most of the children have severe malaria infections with accompanying, life-threatening medical complications.

Two-year-old Chigoa is no exception. Sitting in on a cot, her mother Jagaiy is relieved as her youngest daughter appears to showing signs of initial improvement. 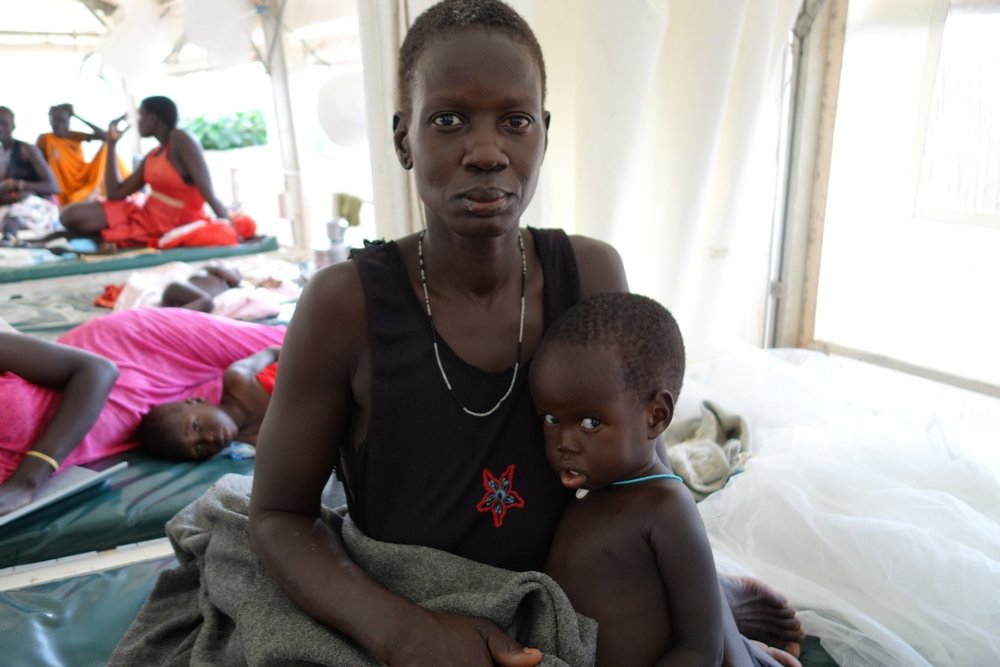 MSF/Jacob Kuehn
Jagaiy sitting on a hospital bed with her two-year-old daughter Chigoa, who appears to be recovering well after a severe, life-threatening case of malaria

Chigoa was brought in three days ago with sustained convulsions, high fever, diarrhea and severe anemia. MSF medical teams worked intensely to save Chigoa’s life; providing intravenous anti-malaria drugs, anti-convulsants to halt her seizures as well as a blood transfusion.

Thankfully, little Chigoa is now on the road to recovery, but too many children have not been so lucky.

Children most at risk in Bentiu

About twenty meters away, out the back of the hospital compound, too many child-sized body bags rest in the MSF morgue; from those too sick, too late for MSF teams to save. Others were brought to MSF already dead.

MSF is working urgently to reduce the number of malaria deaths in the PoC by expanding access to healthcare in the camp; opening three new emergency child health clinics and three malaria points in the last eight weeks. 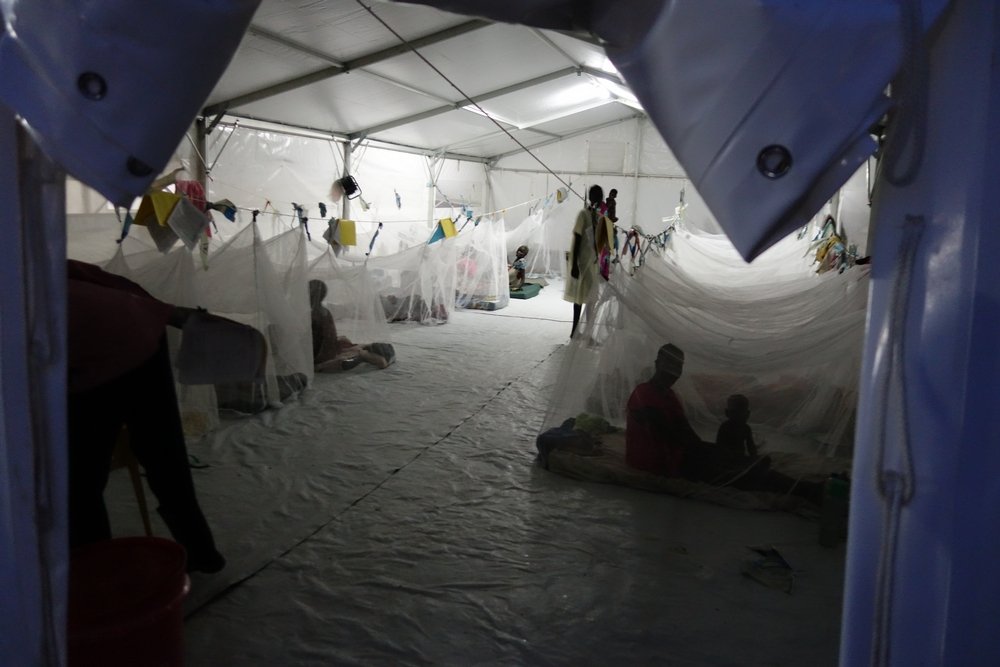 It’s already helped reduce the number of children showing up at the hospital in dire condition. MSF’s hope is that the door-to-door malaria campaign Paulino and his colleagues are carrying out will help even more.

In the camp’s narrow pathways, Paulino completes his visits to another row of houses. It is late afternoon and his team has been providing treatment to dozens of children ever hour.

Sweat is now pouring down his face, but the pace continues. Paulino knows every patient he treats for malaria now helps to reduce their risk of developing a severe, life-threatening case. It’s helping to save lives.

Find out more about our work in South Sudan