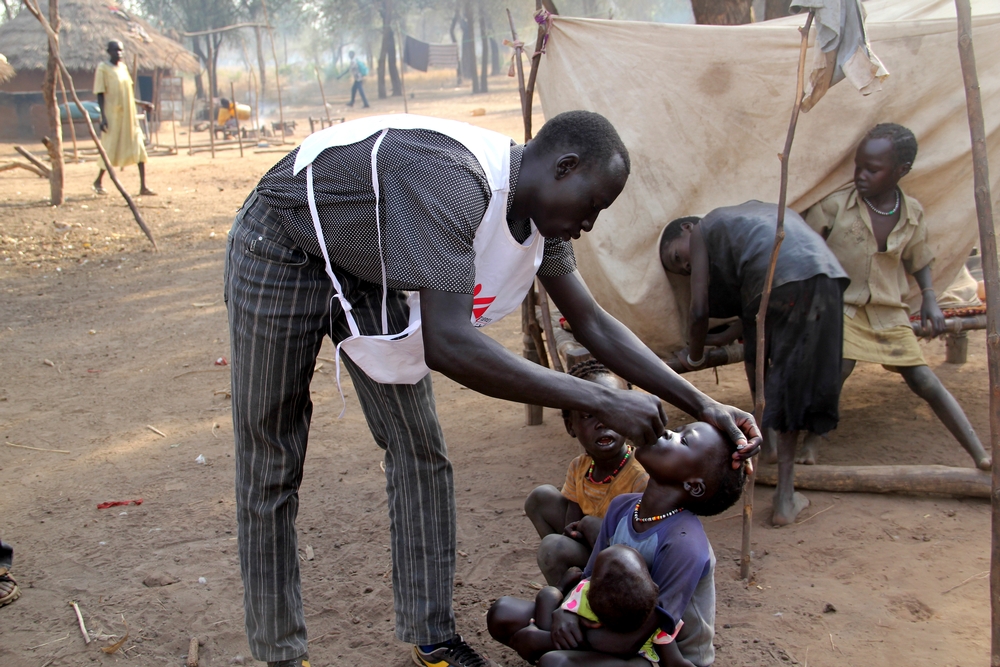 More than 315 cholera cases have been recorded in South Sudan since the Ministry of Health (MoH) officially declared an outbreak in the capital, Juba, on 15 May 2014.

In other locations around the country there have been suspected cases that are awaiting laboratory confirmation. Medical humanitarian aid organisation, Médecins Sans Frontières/Doctors Without Borders (MSF) immediately responded, organizing multiple donations of essential supplies to support MoH health facilities.

“Following five months of intense conflict, dire conditions in many camps for displaced people, and a worsening rainy season, we are concerned about the impact of the disease,” says Mr. Brian P. Moller, MSF Head of Mission in South Sudan.

“Yet cholera can be simply and effectively treated if caught early enough. MSF’s priority is to ensure a quick and efficient response to contain the outbreak as much as possible, working on both the treatment of patients and the prevention of the disease.”

Corinne Baker/MSF
A young child is vaccinated against cholera in Jamam refugee camp during an oral vaccination campaign in South Sudan in 2013.

In Juba, over the last week, MSF has been providing essential supplies to a number of small MoH clinics in the city, but in particular to Juba Teaching Hospital, currently the only cholera treatment centre.

At the same time, MSF teams began constructing a 50-bed cholera treatment center (CTC) in Gudele district, one of the areas most affected by the outbreak. This CTC will be fully operational this weekend, with the capacity to expand to 100 beds, when necessary.

The organization also plans to open other CTCs in the capital to increase treatment capacity in the coming weeks.

In the IDP camps in Juba, where MSF has been providing healthcare since December, emergency teams have already identified CTC sites in the event of outbreaks there, and are also carrying out health promotion activities.

In the rest of the country, where suspected cases of cholera have been reported, MSF is responding in several states.

In the camp for displaced people in Malakal, Upper Nile State, MSF pre-emptively set up a CTC, after vaccinating around 17,000 people there against cholera in April and May this year.

In the same state, MSF sent an emergency team to Kaka, about 40km from Melut, to assess the situation in a local clinic, and to donate equipment and supplies.

The organization is also preparing a contingency plan in Melut IDP camp in case of a cholera outbreak. In the displaced camp in Bentiu, Unity State, MSF is providing assistance to an ongoing cholera vaccination campaign and is prepositioning cholera related supplies.

In Lakes State, in Minkamman, where MSF has been providing assistance to an estimated 80,000 displaced people since December, the organization has carried out a supplementary cholera vaccination campaign in the camp.

This campaign is targeting displaced people who may have missed previous vaccine rounds conducted earlier this year.

Two rounds of the vaccine are necessary for it to work effectively, yet even then it’s estimated to provide only a 65% chance of protection from the disease.

It is, however, one of the few methods, along with improving conditions, water supply and sanitation, of preventively giving a vulnerable community a better chance of avoiding an outbreak.

MSF is also providing 500,000 litres of chlorinated water per day on this site, which is key to reduce the transmission of the disease. The teams on the ground are ready to set up a 20-bed isolation ward and a CTC in case of an outbreak.

Cholera is an acute intestinal infection caused by bacteria – Vibrio cholerae – found in unsanitary environments. The diarrhoea and vomiting brought on by the disease quickly lead to severe dehydration and can result in death.

Cholera can be simply and effectively treated provided the treatment is started early enough.  Treatment involves replacing the lost water and electrolytes such as potassium and sodium by rehydrating the patient with oral rehydration solution or, for the more serious cases, intravenously.

MSF has been providing medical humanitarian assistance in what is now South Sudan for over 30 years. After fighting broke out in Juba on 15 December 2013, and then in several other states, MSF increased its capacity to rapidly respond to emergency medical needs in the country.