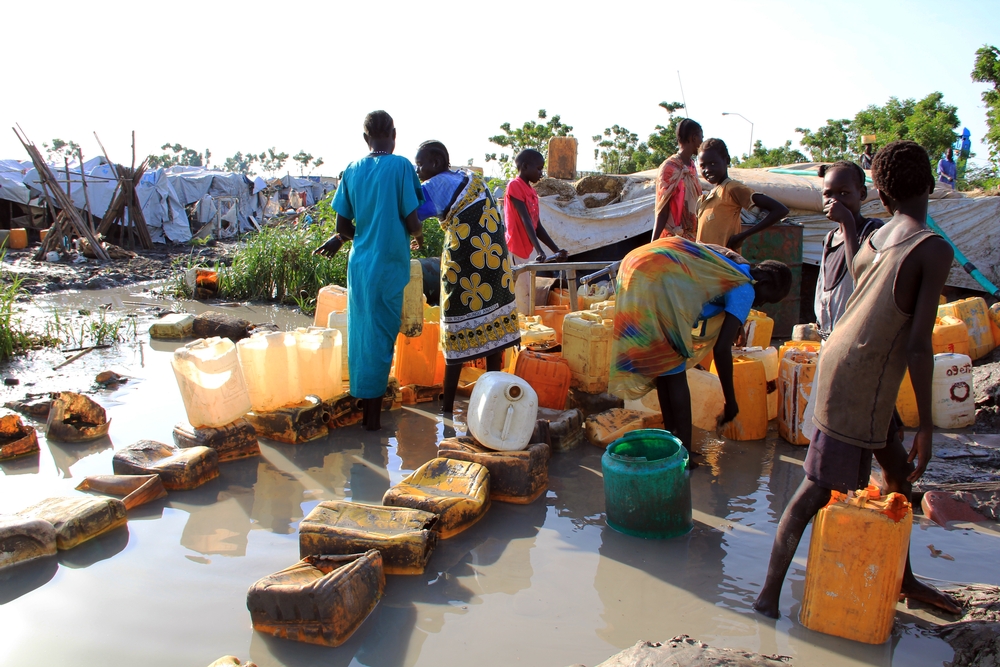 Overcrowded and substandard living conditions are jeopardising the health of people sheltering in the UN’s Protection of Civilians site in Malakal, South Sudan.

Patient numbers at MSF’s hospital in Malakal are three times higher than they were five months ago, while the number of sick children under the age of five has increased five-fold.

“The sickness of our patients is directly related to the overcrowded and deplorable conditions in which they are living,” says Monica Camacho, MSF programme manager for South Sudan.

“More space must be immediately allocated to the people seeking shelter, and aid organisations must urgently improve the provision of basic services and necessities.”

Some 48,000 people are currently living in the Malakal Protection of Civilians (PoC) site, after more than 16,000 people arrived in July and August, fleeing conflict and hunger.

Many came from areas where no aid had been available for months. Most people arrived with nothing. 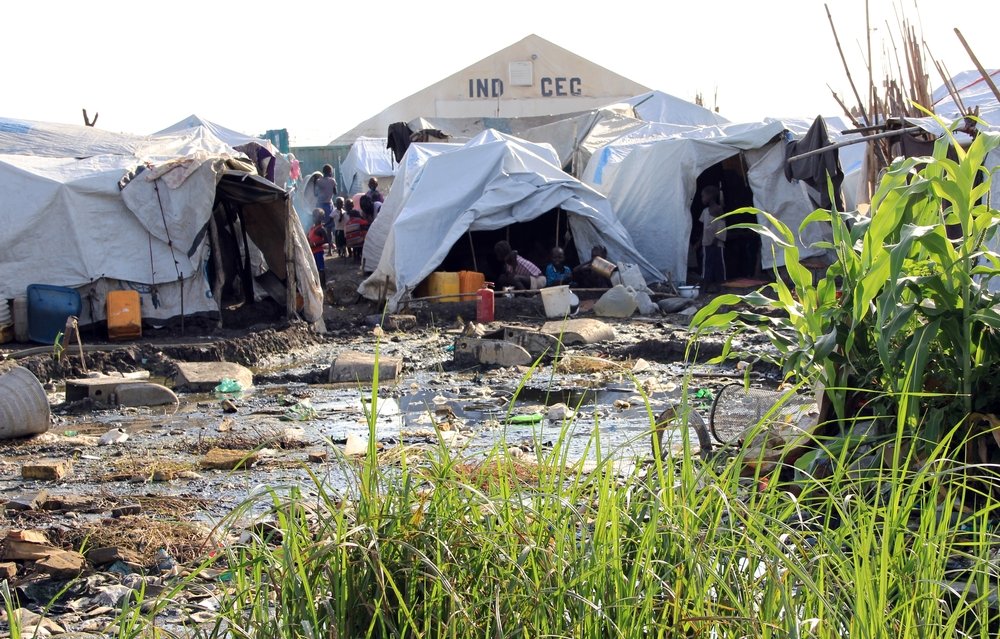 Jacob Kuehn/MSF
Standing water is a recipe for the spread of illnesses, especially malaria. Since the new arrivals came three months ago, the number of children MSF has provided with medical consultations each week has increased five-fold.

In recent weeks, the MSF hospital has been filled beyond capacity with children suffering from life-threatening pneumonia, malaria and other illnesses.

With the onset of the cold season, pneumonia is a particular concern given the crowded and unhygienic conditions.

The number of patients treated for severe respiratory tract infections has already tripled since September. MSF fears these trends may worsen unless conditions are improved.

Those with the worst living conditions are the thousands of new arrivals, whose makeshift shelters are set up in marshy areas of the camp not designated for habitation.

Access to clean water and sanitation are inadequate, and children play in the mud surrounded by barbed wire and rubbish. 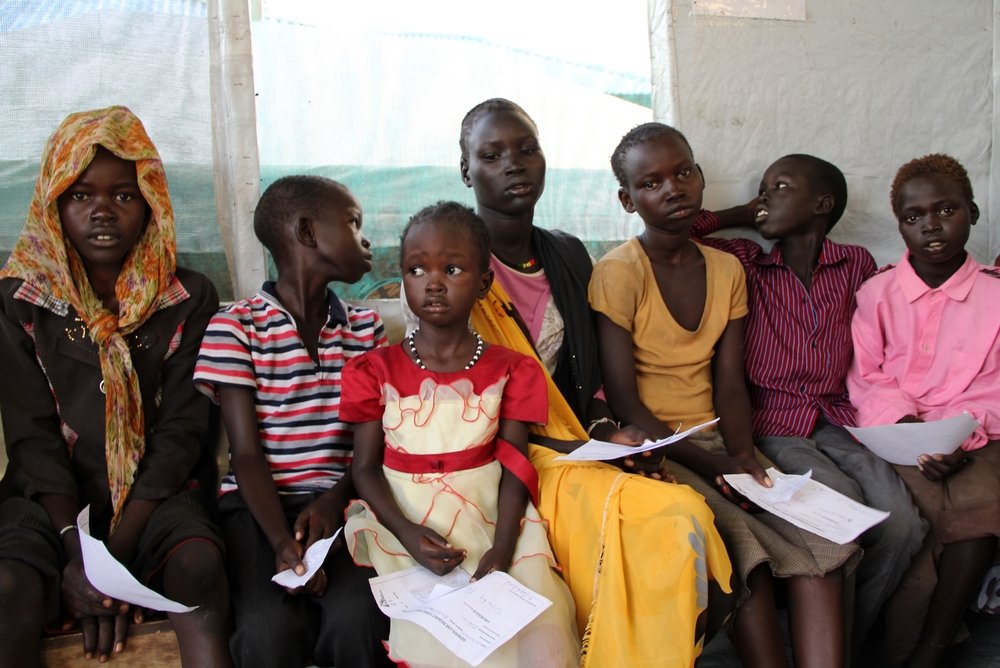 Jacob Kuehn/MSF
Children waiting outside the MSF emergency room. As the camp becomes increasingly overcrowded, the total number of patients treated by MSF has more than tripled since June.

Seven thousand new arrivals, mostly women and children, have been relocated to a ‘contingency area’. They are living in communal tents, shared by more than 50 people, with less than 4.5 m2 of living space per person, far below the 30 m2 required by international humanitarian standards.

Living conditions and sanitation are inadequate throughout the entire camp. The UN has designated about 0.5 km2 for the displaced people to shelter in, despite their numbers being equivalent to the population of a small city.

The overall living space for the population is barely more than 10 m2 per person, which includes pathways and other spaces not used for habitation.

Access to clean water is also below acceptable levels and many families lack access to essential items such as blankets. 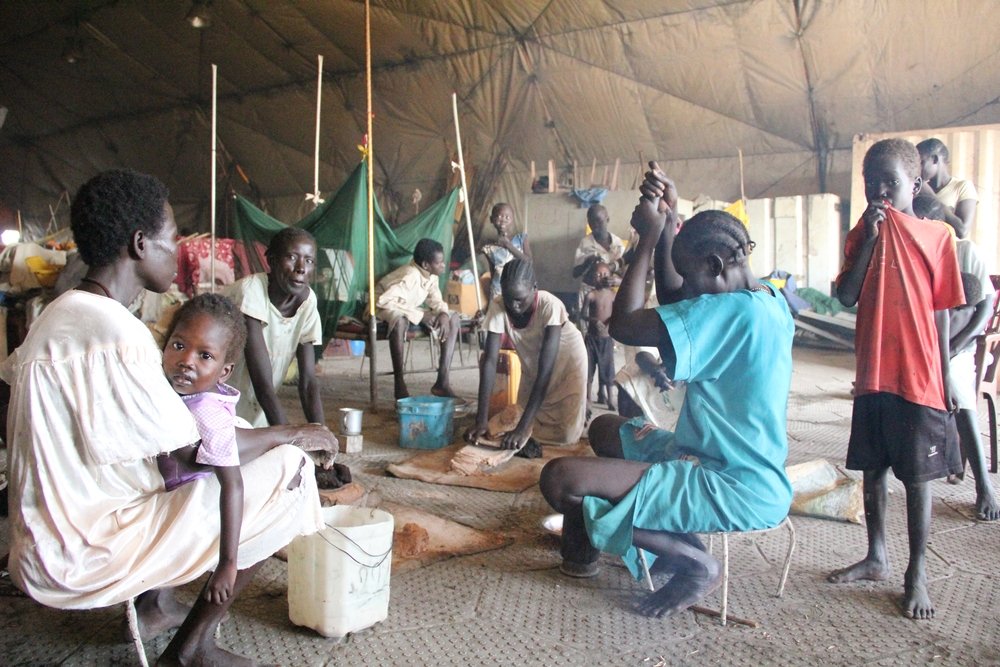 Jacob Kuehn/MSF
Inside the UN Protection for Civilians site, where nearly 48,000 people are sheltering from the conflict, violence and malnutrition. These residents occupy an old warehouse, waiting for more suitable shelter.

People have been sheltering in the PoC site in Malakal since conflict erupted in December 2013.

The population of the site has more than doubled this year, following an influx of 10,000 displaced people in April and a further 16,000 in July-August.

MSF operates a 50-bed hospital in Malakal, including a 24-hour emergency room, as well as a separate emergency room inside the PoC site.