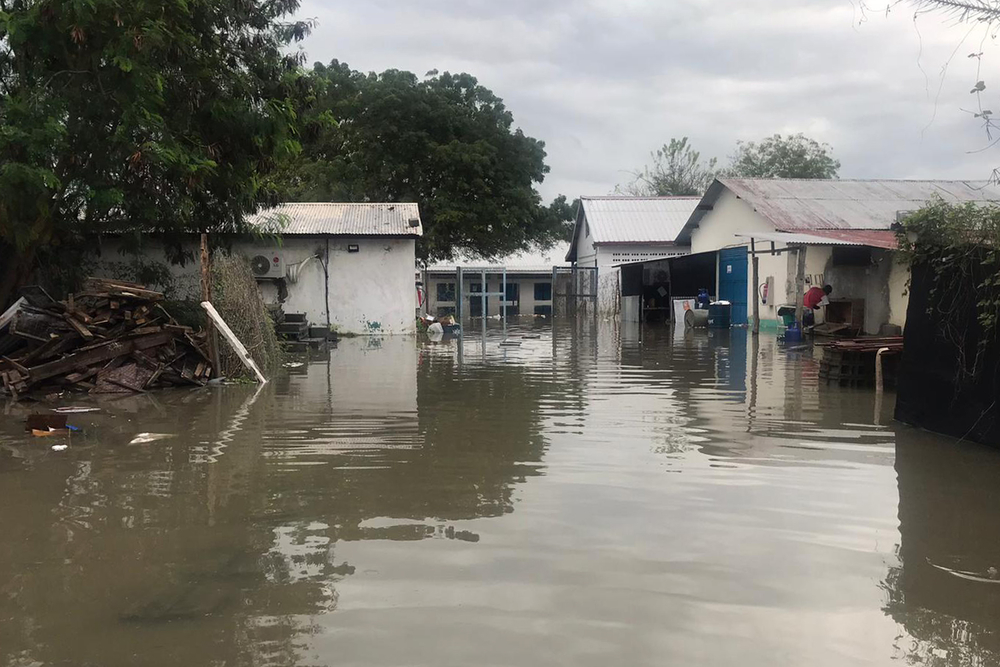 South Sudan: “The only way to move around the hospital now is by boat”

MSF medical team leader Benedetta Capelli is just back from Pibor, in South Sudan, where rising floodwaters have engulfed MSF’s hospital and much of the surrounding area. She spoke to us on 24 October 2019.

“Our hospital in Pibor is on the outskirts of town, about 100 metres from the River Gumuruk, with the river creating a loop around it.

October usually marks the end of the rainy season in South Sudan, and we haven’t had much rain in recent weeks. But with rain falling in neighbouring Ethiopia and Kenya, two weeks ago Pibor river suddenly started to rise rapidly.

Flooding is nothing new in Pibor – there were major floods in 2013 and 2017 – so we had a plan in case the MSF compound was at risk. But we had no idea how serious this was going to be.

We had already moved the isolation area to higher ground in September. On 13 October we also moved the adult ward, children’s ward and therapeutic feeding centre.

When the water started to creep towards the operating theatre, we had to close it. We lifted the most expensive – and heaviest – equipment to an area we hoped would stay dry, hoping to preserve it.

Next under threat were our warehouses. We did our best to move as many items as we could to a water-free zone.

By now we were seriously worried. Every day the water continued to rise by a further 10 to 20 cm.

We all started to fear that our efforts were in vain. For our South Sudanese staff, the distress was doubled. Just as our compound was disappearing underwater, their own homes were being flooded, so they also had their families and their houses to worry about – a double stress for them.

The moment we saw the water infiltrate the new ‘safe’ tents, we decided to look for another location for our hospital.

The authorities found us a space in Pibor’s marketplace, and over the following days we dismantled the hospital and moved it, piece by piece, to the new location. 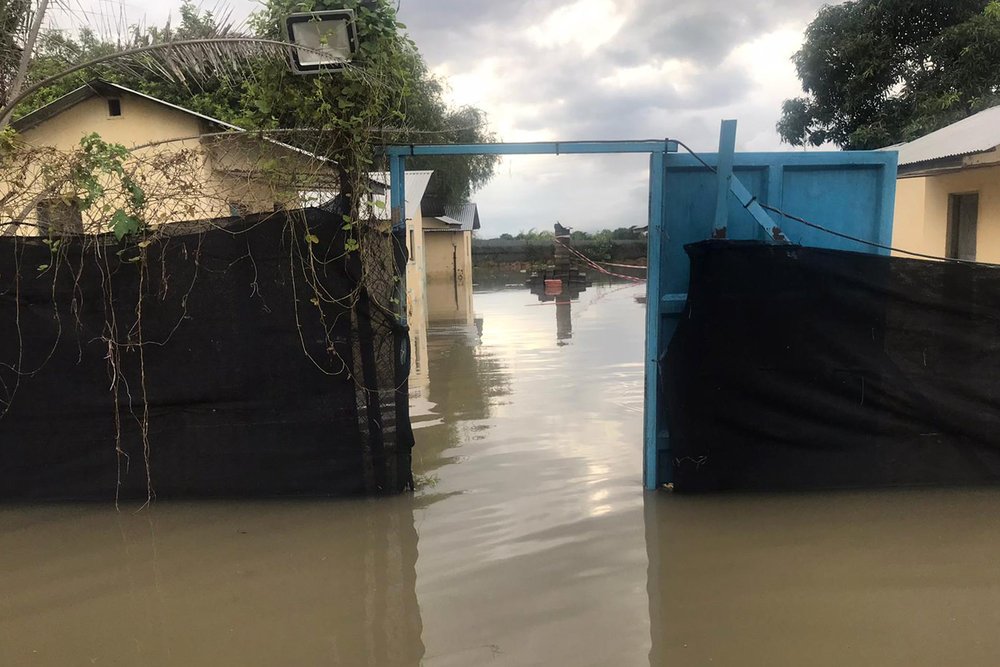 We created an area with tents for all the main medical activities, but with a reduced number of beds – there simply wasn’t space. Last Friday [18 October] we finished moving the remaining patients – nine in total – to the temporary site.

By now our team was exhausted, so we sent most of the international staff to the capital, Juba, to recuperate, leaving a skeleton team of three – one medic (me), one project coordinator, and one water and sanitation expert who arrived from Juba, supported by our local staff.

We no longer felt comfortable sleeping in the MSF compound. The water was coming from all sides now. On our final night there we all slept together in the highest-up container. We had to paddle in a plastic boat to reach the toilets. In fact, the only way to move around the hospital now is by boat – the compound has literally become part of the river.

At the temporary site in the marketplace, our team is providing about 60 outpatient consultations each day, as well as antenatal care, inpatient care and deliveries. But we are worried about the site and how we can care for the most severe patients – both existing patients and new ones who are arriving.

The site has no electricity and is knee-deep in mud. We lost a lot of items to the flood – we now have just one oxygen concentrator. We have enough drugs to last a week, unless many more new patients arrive. We are waiting for more drugs from Juba, but transport – now only possible by helicopter – is challenging. The helicopter landing strip is just a thin strip of land surrounded by water.

We have no surgeon, so can’t perform emergency caesareans. As a midwife, I know that if a woman has a uterine rupture, both she and her baby could die, leaving her existing children without a mother.

We’ve lost our cold chain, so can’t carry out vaccinations. In a place like Pibor, where vaccination coverage is uncertain due to people moving around and the lack of health facilities, this could be a time-bomb. 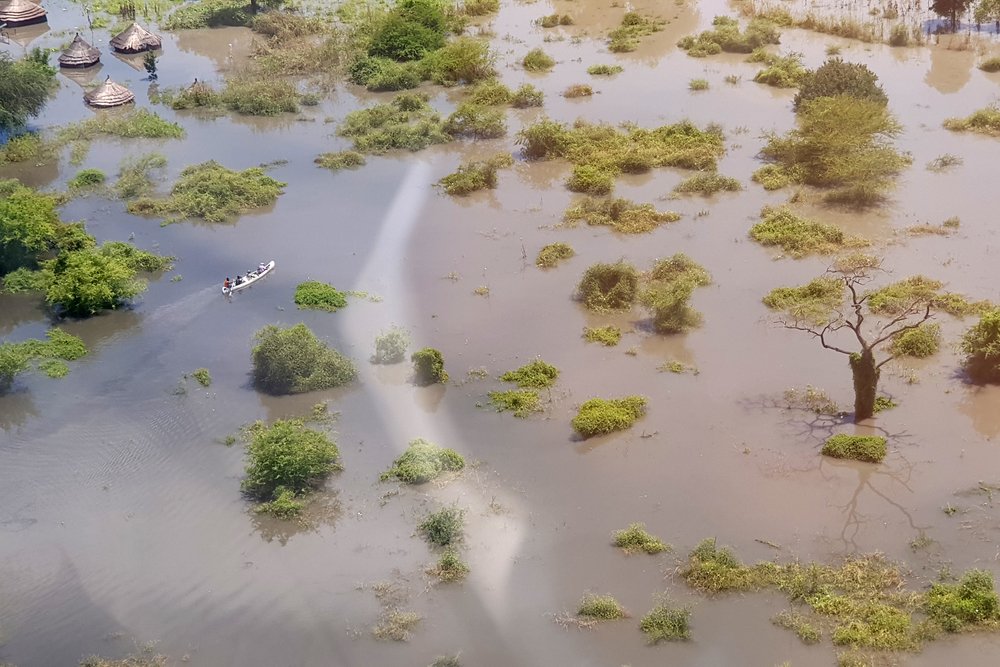 MSF
On an aerial assessment from Gumuruk to Lekongole, where MSF runs two primary healthcare units, people can be seen moving via canoes as their tukuls are completely submerged.

Most people in Pibor are semi-nomadic: they follow their herds in the dry season and settle in town in the rainy season. They are still around the town, but 90 percent of their shelters are under water. They are staying in a site above the waterline, but it has no latrines and there is only one working borehole for the 50,000 or so people in Pibor.

Waterborne diseases are a major health concern – and cholera is the biggest fear. A measles outbreak was already underway, and we are worried that cases may increase. We also expect an increase in respiratory tract infections, malaria and snakebite. We may also see future outbreaks of childhood diseases related to the current lack of vaccinations.

Our next step is to find a location to install an emergency hospital partly equipped with an inflatable tent – but the spot we identified yesterday [23 October] is already under water.

We have no idea how long the floods will last – in 2017, the floodwaters took three months to subside – and right now the water is still rising. There are so many challenges and we cannot do this on our own – we desperately need other organisations to respond.

When I left Pibor yesterday, the town and its surroundings looked like a lake. Flying over the flooded grasslands, I could see the green of the grass overlaid with the reflection of the sun and the clouds in the water. On the surface it looked beautiful – but it’s not at all beautiful when you think of all the people forced from their homes and all those cut off by the floodwaters.”