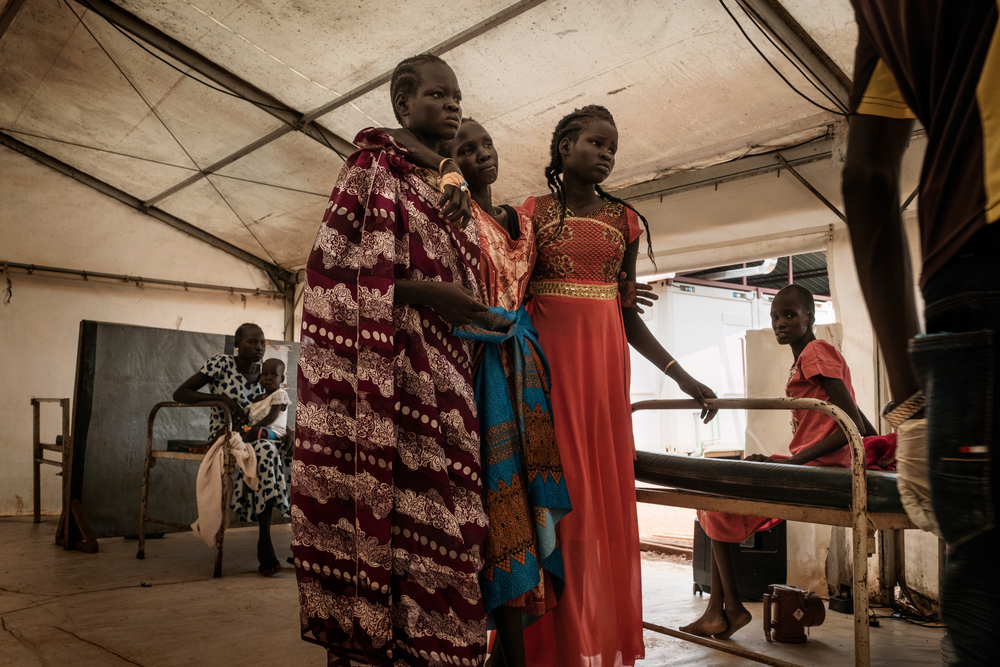 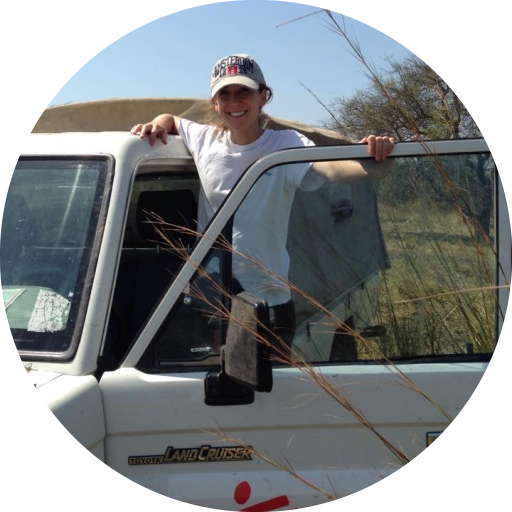 Melissa Arons was on her first mission with Medecins Sans Frontieres/Doctors Without Borders (MSF) as an Outreach Nurse in Lankien, South Sudan. She was impressed by the strength and resilience of the women in South Sudan and shares her impressions in her blog post.

A woman walks into the labor ward, straight through to the delivery table. Five minutes later her baby is born.

Two hours ago, she was in active labor and told to stay in the hospital for monitoring, however she went to the market to do some last minute errands.

Women in South Sudan are fierce and resilient and this is seen every day when they labor with no expectation of pain relief, carry construction supplies across thorn-filled dirt paths and pump and carry endless jerry-cans of water to their families.

The media reports on the blood-filled disputes of men – cattle raids, failed peace agreements, lost boys and family feuds; meanwhile, the persistent hard work of women holds South Sudan together. Woman here are powerful. They are hard workers and amazing mothers of many, MANY children.

It’s not uncommon for a woman in her late 30’s to have 10 children. It’s a source of pride, protection, and an insurance policy against a very high infant mortality rate. And of course, having many children means that the all-important exchange of cattle will continue to drive familial relations.

In the age of hypno-birthing, scheduled C-sections, epidurals, music therapy, pain medications, and air conditioned, clean and cushioned private labouring rooms for women lucky enough to be living in the ‘right’ country, options like these are simply not available here.

In South Sudan, a woman can be seen as strong if she has her first baby at home, surrounded by family. If both survive the process of labor, there is perceived status to be attained. It's a game of chance, and the odds are not in the favor of women. 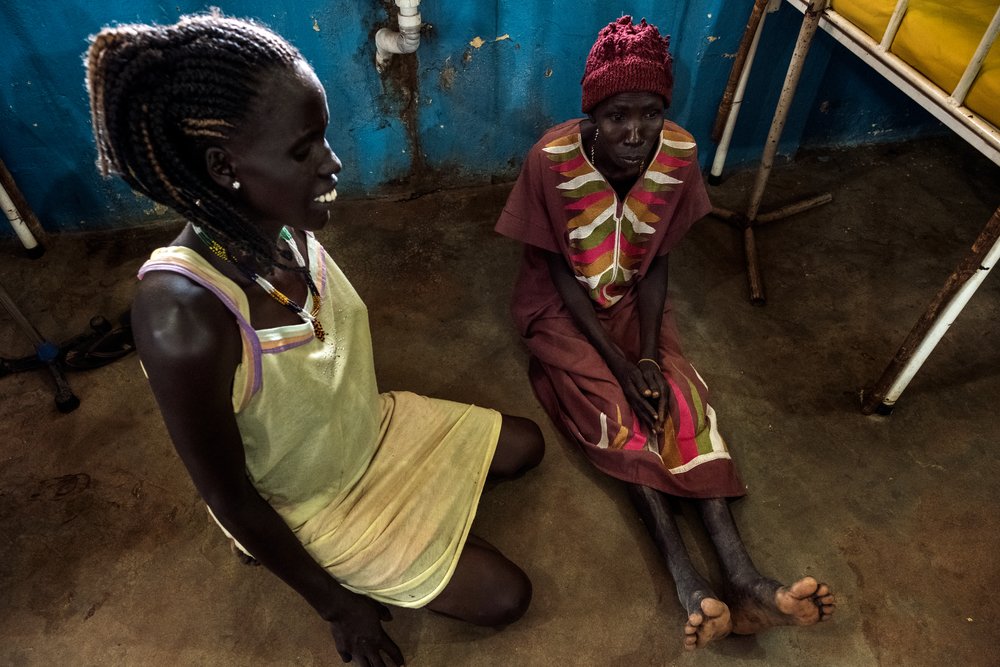 Peter Bauza
Atok Kual Deng, 26 and pregnant, has walked with her mother Aker Ajer a whole day and a night to reach the MSF clinic.

South Sudan has one of the highest maternal mortality rates in the world. Women with complications will labour for days before making the journey to Lankien hospital, sometimes because of the wet season and distance, and sometimes because of customs or lack of a care-taker for the other children.

Despite repeated community meetings with Traditional Birth Attendants (TBA), outreach messages, and trainings on the importance of delivering in a hospital, the majority of women have children at home. Still, many women do come to the hospital for check-ups, vaccinations and delivery. Change comes slowly and things are improving.

In Nuer culture, women are solely responsible for gathering and carrying water. Every morning and afternoon women and girls are lined up at the boreholes. It’s not uncommon to see six-year-olds in line. Not only is it physically exhausting to fill numerous water jugs ever day, they must also carry the water home. Baby balanced on one hip, on their head a heavy jug, in their other arm a second heavy jug. Michelle Obama’s arms have nothing on these ladies.

While most residents utilise the two main water pumps in town, some continue to use pond water because of proximity. Schistosomiasis, giardia, worms, cholera, hepatitis E and other infections from contaminated drinking water, poor hygiene practices and lack of sanitation remains common-place despite efforts from MSF and other NGOs.

MSF has built and maintained one of the two main boreholes in town and has assisted in the completion of the second, which is run off of solar power. Solar power is surprisingly one of the main (and only) sources of power for Lankien residents. With less time spent pumping water, it gives the women more time and energy for activities like collecting supplies.

There are limited construction resources in Lankien and each type of tree is used resourcefully. The Neem tree is used for medicinal purposes and most commonly seen for brushing teeth. The acacia tree, the same tree that houses the sand-fly that spreads Kala Azar, is used for tukul [hut] and fence building. 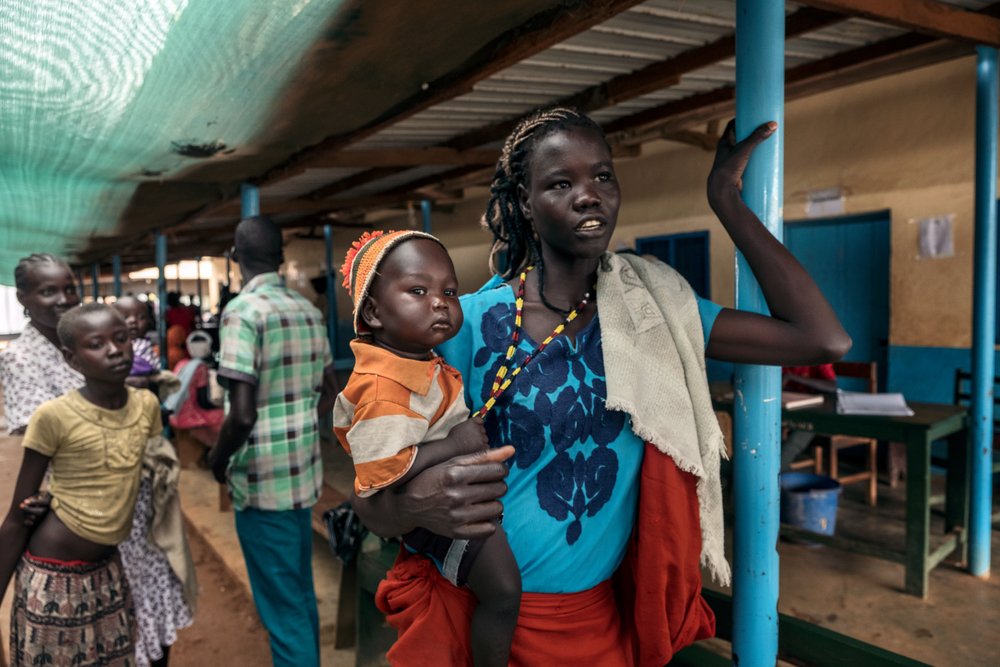 Peter Bauza
Anger Garang and her son Chier Ajon (1year) at the vaccination control at the MoH (Ministry of Health).

Fetching water and housing materials, having and raising children, and cooking and cleaning fills their days. Still, they smile easily and are quick with a joke. My Nuer is improving, and with it I can better understand their sense of humour. (I was a bit dismayed to find out my nickname does not mean ‘sweet girl’ as I was told, but rather ‘hunchback’).

Nuer women are typically long legged and high cheek-boned with ebony flawless skin like the famous Alek Wek and Nykhor Paul. Their natural build gives them a long stride so similar to a runway strut. Africa is home to the tallest and shortest humans on earth; the South Sudanese being the tallest, and the Pygmies of central Africa the shortest.

While malnourishment is rampant, scales like Z-score are less informative because of their naturally tall and elongated physique. This must be considered when screening the population for nutritional status.

Education opportunities and employment are extremely limited in South Sudan, especially for women. Marriage and raising children are the main events in a woman’s life. Fittingly, these events are celebrated with dance, singing and sometimes sorghum alcohol and celebratory gun fire.

With life expectancy for South Sudanese women only in the mid 50’s, and with their lives so frequently uprooted from insecurity, there’s no time for an old woman to sit back and relax.

Women who dance when their children are cured of Kala Azar and women that shout greetings every morning in the hospital; they are filled with excitement and attitude.

At every age, women in South Sudan are strong and beautiful. 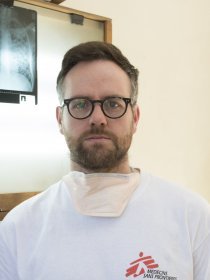