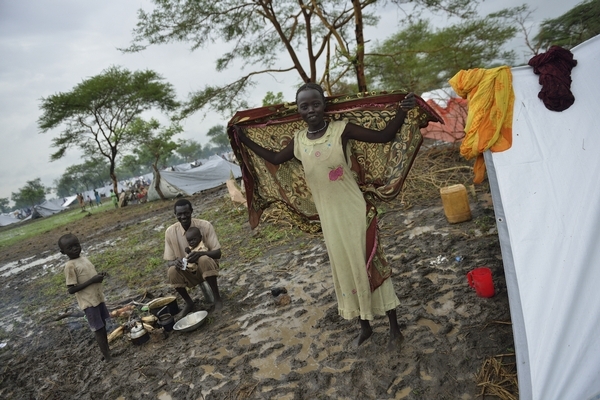 The death rates were derived from rapid epidemiological surveys carried out in the Jamam refugee camp in Maban County.

The surveys were carried out prior to the onset of heavy seasonal rains that have flooded the camp and significantly increased the risk of illness for the already weakened refugees.

All agencies involved in the relief effort, led by the United Nations High Commission for Refugees (UNHCR), must find better options for the people living in Jamam. Failure to do so will almost certainly lead to more misery and deaths.

“These people have fled terrible violence in Sudan and lost family members during their arduous journeys for safety, and now they are sitting exposed in refugee camps on a flood plain and dying from preventable diseases due to horrific living conditions,” said Tara Newell, MSF emergency coordinator in Jamam.

Having arrived with stories of violence and harrowing conditions in Blue Nile, refugees in South Sudan’s Upper Nile State, in many cases already ill, have arrived in a place that is unsuited to accommodate a hundred thousand refugees.

A baked mud wasteland in the dry season and mostly a swampy flood plain in the rainy season, there are few islands of dry ground and it is extremely difficult to locate places to drill for boreholes.

The refugees met with inadequate shelter and sanitation facilities, far less than minimum standard quantities of clean water, and now the rising flood water is deepening the crisis.

After heavy rains, the majority of Jamam camp - one of three refugee camps in the area - flooded last Thursday night.

The latrines have overflowed, contaminating standing water, which is not fit for human consumption while there is a general shortage of potable water.

Over the last two weeks, MSF medical teams in Jamam have treated at least 2,500 people for diarrhoeal diseases, respiratory diseases, malaria, and malnutrition.

As the rains increase, more and more people are falling ill, especially from malaria and hypothermia. Young children are the most vulnerable.

“Our clinic is already filled with children suffering from pneumonia, diarrhoea, and malnutrition,” said Dr. Erna Rijnierse, working with MSF in Jamam. “If they stay in these sorts of conditions, there could well be profoundly distressing consequences.”

One death per 10,000 people per day is the emergency threshold, defining this as a severe situation. For Jamam camp alone it means that every day around eight children are dying. Sixty-five percent of deaths were reportedly due to diarrhoea.

The rains will also further exacerbate unhygienic conditions in the camps, creating ideal conditions for the further spread of disease. The soaked earth is already making transport exceedingly difficult to all the refugee camps in the area.

To meet the immediate lifesaving needs of the refugees, roads and airstrips must be improved to facilitate the transport of aid personnel and heavy equipment in order to adequately achieve a comprehensive level of assistance needed by this highly vulnerable, exhausted population.

“The living conditions in Jamam are now simply unacceptable,” said Newell. “What’s needed is for all agencies involved, led by the UNHCR, to join together to come up with a solution that can remove these refugees from the health risks associated with the dire living conditions in the camp. We have to proceed with a great sense of urgency.”

The organisation is also distributing basic survival items like plastic sheeting, blankets and jerrycans, operating water and rehydration points, monitoring the mortality and morbidity among newly-arrived refugees and provided emergency assistance to refugees who were moving from the border towards and between camps.