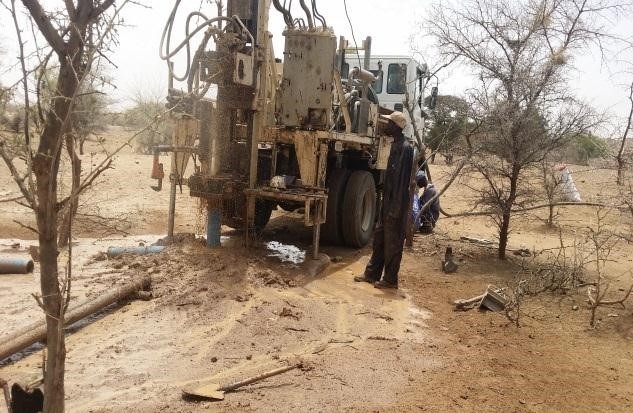 Since mid-January approximately 61,000 Darfuris have poured out of Jebel Mara, North Darfur and settled in the nearby Sortoni camp. This is part of a larger exodus caused by the Sudanese government’s attempt to re-establish control over Jebel Mara.

The wellbeing of those looking for safety in camps like Sortoni is threatened by insufficient supplies, poor conditions and criminal attacks. Médecins Sans Frontières (MSF) has been working in the camp providing medical services, water, sanitation and non-food items for the newly arrived.

The 61,000 civilians fleeing the fighting in Jebel Mara for the camp of Sortoni are at times finding themselves in dangerous situations. Currently camp residents are not receiving sufficient water and many are now searching for alternative sources outside the camp.

Some of the wells that they are using are contaminated, and in the last four weeks there have been eight deaths of residents due to diarrhoea, which is most likely due to the drinking of this bad water.

Interventions by INGOs in Sortoni camp to provide water to the approx 60,000 IDPs have fled Jebel Mara after the Sudanese Government has started a military campaign to squeeze out rebels.

“Lack of clean water is the main concern,” explains David Therond, MSF’s head of mission. “International and local NGOs, as well as the Sudanese authorities, need to do more to truck clean water into the camp."

"We have large numbers of people living in the most basic conditions and they are only receiving about 5 litres per day, significantly less than the 10 litre minimum the United Nations recommends for healthy living."

Some of the other international organisations present have tried to drill boreholes in this harsh environment but so far they have come up with nothing. The only solution to date is to truck water in from neighbouring areas, which is logistically both difficult and dangerous.

MSF has recently increased its trucking to 64,000 litres a day, but, when combined with what the other NGOs are providing there is still a massive shortfall of 286,000 litres a day.

“There are other challenges facing the population,” says David. “Food distribution can be sporadic and the rations given to the residents can be insufficient. We are finding cases of malnutrition among the children, something that should not happen once they are receiving aid.”

Interventions by INGOs in Sortoni camp to provide water to the approx 60,000 IDPs have fled Jebel Mara after the Sudanese Government has started a military campaign to squeeze out rebels.

Disturbingly, reports of sexual violence are spreading. Given the cultural taboo that exists against young women reporting such attacks, it is thought that it is a sign of a much wider problem. Criminal gangs are also preying on the new arrivals. The authorities need to restore order to the areas around the camp.

MSF is continuing to contribute to the relief effort. The organisation is principally using its expertise to provide primary, secondary and reproductive health services to the population.The risk of communicable diseases like measles is of real concern as they can spread very quickly in an environment where people are living so closely together.

Part of the medical organisation’s response has been a blanket measles vaccination campaign for children under five years of age.

MSF has also started to include in its activities the expanded programme on immunisation, a course of vaccines that protects children against polio and administers the BCG combination.

“The camp needs to develop an infrastructure to cope with the influx of people,” says David.

The water and food that people are receiving is totally insufficient and we fear that a larger health emergency is around the corner if the non-governmental and governmental organisations don’t start stepping up.”

Read the latest news from Darfur