“I live in a tent that I reinforced myself,” says Dagnew, a 40-year-old man from the northern Ethiopian region of Tigray, now staying in Al-Tanideba refugee camp in Sudan. “My neighbours came running to me because their tents were destroyed. We slept 20 people in my tent last night. We have to help each other.”

"I was afraid for my life last night"

"My tent was flattened by the wind,” says a 28-year-old Tigrayan man named Aftoum.

“I had one wooden pole and I put it up inside the tent and held it all night to make space for a bed under it so my friends can have some space to sleep." 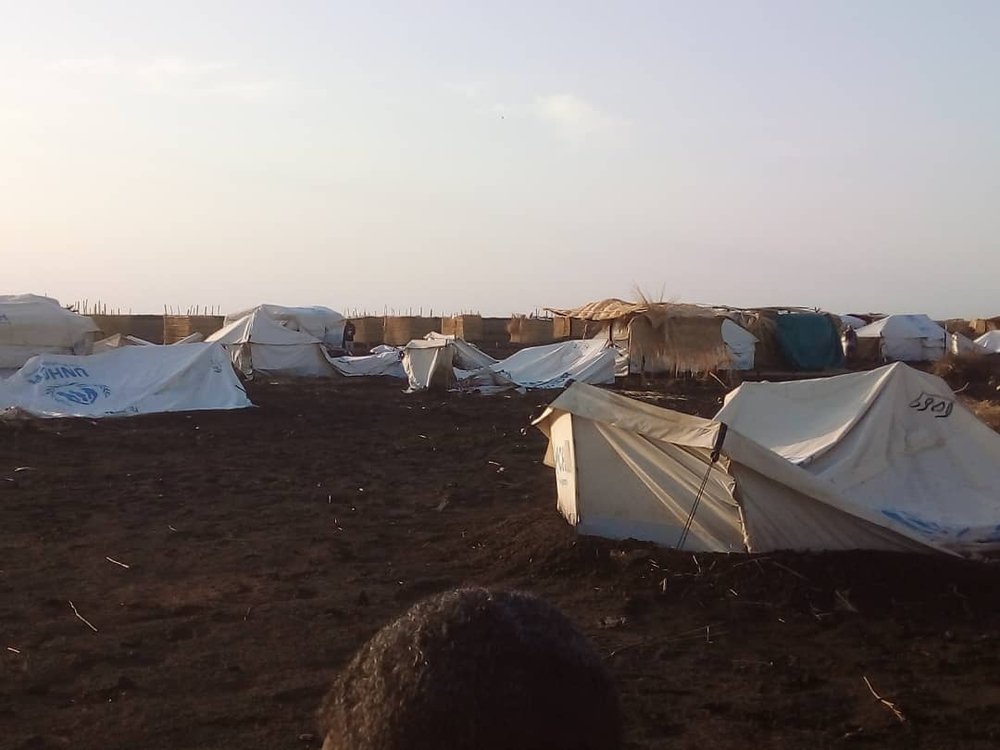 /MSF
The strong winds during the rainy season in the camp destroyed most of the tents in Al Tanideba camp.

"All of my neighbours' tents went down and I'm worried about them.”

“I was afraid for my life last night,” says Rigat, a 25-year-old woman, also from Tigray.

“I left my tent because it got destroyed and I ran with some belongings to my grandfather’s tent, which he reinforced."

"When I arrived, there were 20 people inside. All the neighbours came to my grandfather's tent because it was still standing."

"But we could not sleep – there was no place to lie down. So we just sat there and waited for dawn." 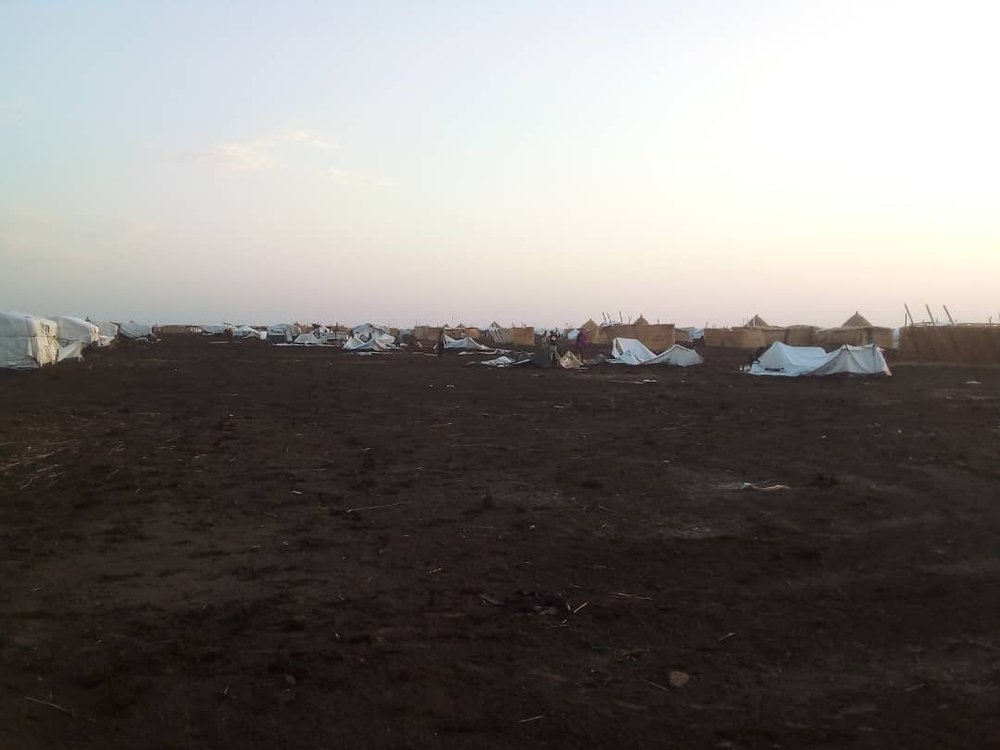 Tents haphazardly scattered in the camp after the strong wind that hit the camp.

"I really don't want to stay in this camp but I know I can't go back to Tigray either. I don't know what to do."

This is how refugees described their experiences to MSF teams after the second strong winds of the rainy season hit Al-Tanideba camp, in Sudan’s Gedaref state, on 7 June.

"Three weeks after the first storm, which destroyed 200 tents, a second storm on 7 June destroyed the remaining tents in the camp"

Al-Tanideba is one of two official camps in the state, which together host some 40,000 refugees who have sought safety from the conflict in Tigray. 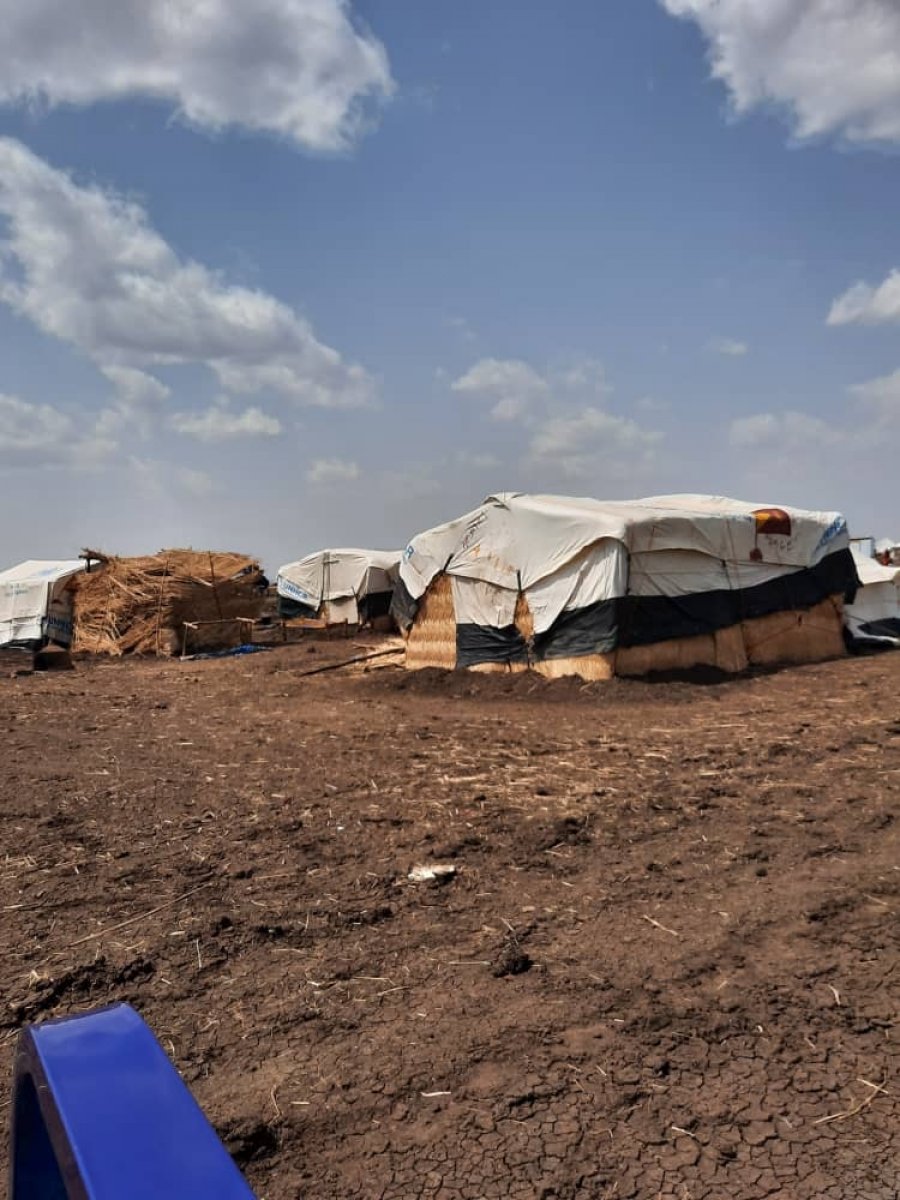 MSF/
Some of the reinforced tents in Al Tanideba camp. The only tents that survived the extreme winds. Some refugees had managed to reinforce their tents in advance, but most lacked the material and funds to do so.

Three weeks after the first storm, which destroyed 200 tents, a second storm on 7 June destroyed the remaining tents in the camp.

Some refugees had managed to reinforce their tents in advance, but most lacked the material and funds to do so and are now sharing tents with others or in communal shelters.

MSF’s clinic in the camp was also damaged by the storm despite having taken measures to protect it.

“The metal roof was damaged, the emergency room is not functional, the partitions fell down and the biggest partition is broken,” says MSF project coordinator Sergio Scor. 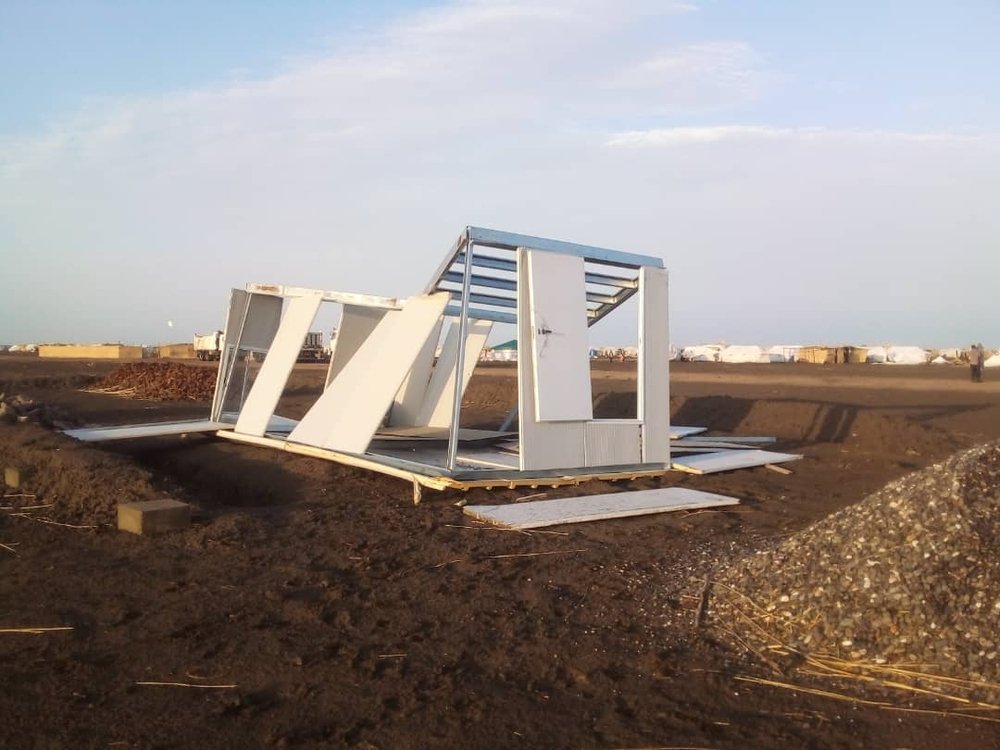 MSF/
The extreme wind effect in the camp.

“The pharmacy was flooded, but thankfully the medication and the boxes of supplies were all safe on pallets and metal shelves."

"The damage to MSF’s clinic can be repaired, but what was heartbreaking was hearing people screaming and seeing them running around the camp seeking shelter in the middle of the night.”

The site selected for Al-Tanideba camp is built on ‘black cotton’ soil, a clay soil, which is hard and cracks during dry season but in a rainy season becomes a pervasive, wet sticky and muddy.

MSF has already raised the alarm at all levels – from camp management and aid agencies to governments and donors – about the risks of extreme weather conditions associated with the rainy season in this part of the state.

“We all knew that the main issue of the camp is the extreme wind during rainy season, and failure to prepare for it in a timely manner by aid organisations has left many refugees with no choice but to leave the camp"

There is an urgent need to carry out extreme wind and flood prevention activities, reinforce tents and latrines. 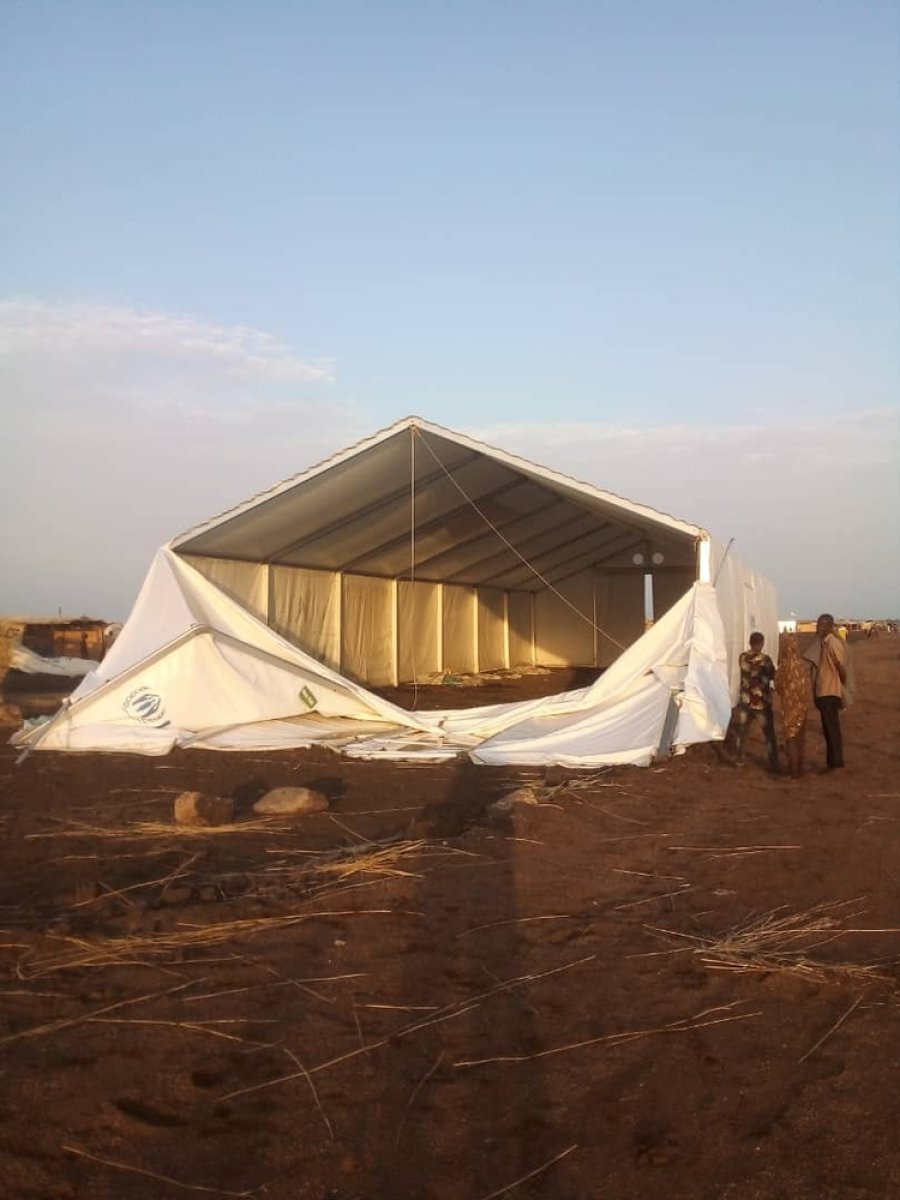 MSF/
A UNHCR rubhall damaged by the wind in the camp.

“These measures were supposed to be implemented several months ago, even before the arrival of refugees at the camp,” says MSF head of mission Jean-Nicolas Dangelser.

“We all knew that the main issue of the camp is the extreme wind during rainy season, and failure to prepare for it in a timely manner by aid organisations has left many refugees with no choice but to leave the camp." 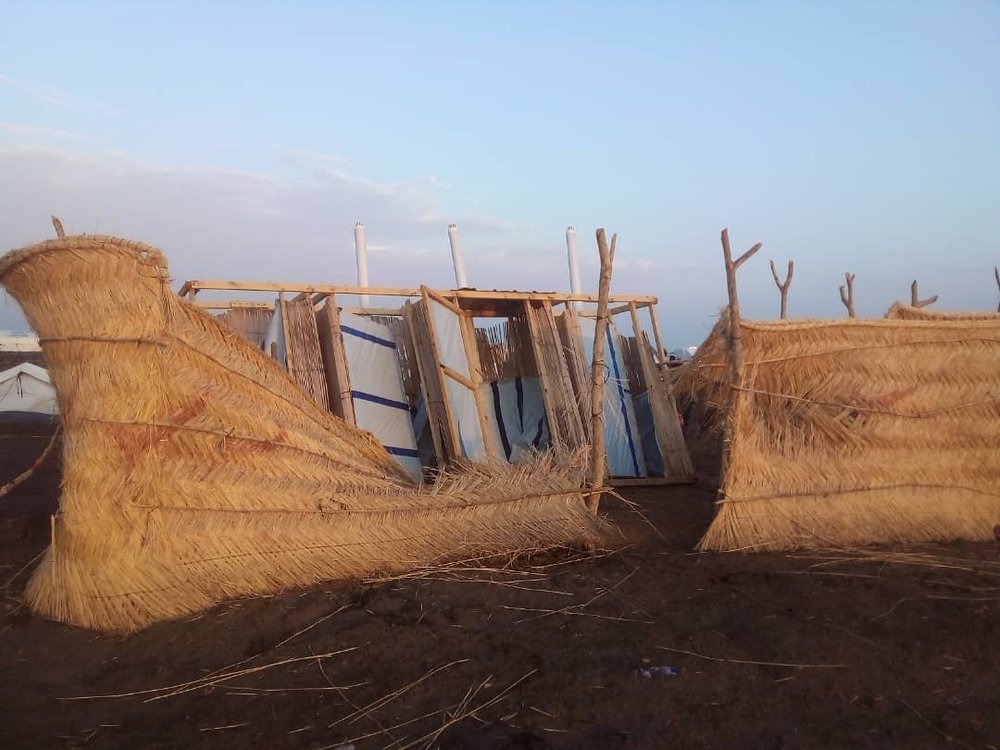 MSF/
A superstructure of latrines in AL Tanideba camp that was destroyed by the strong winds in June, 2021.

"We will continue working to support people in the camp but it is too late to repair the psychological pressure inflicted by the damage to their tents and possessions.”

"They go out of pure despair"

A flyer distributed in April warning of the risk of damage to tents and belongings during the rainy season, followed by the first storm in early May, created panic within the camp.

Many refugees have expressed a wish to leave the camp citing their concerns about the rainy season.

Each day, dozens of people leave, some are heading for Hamdayet, the crossing point between Sudan and Ethiopia, from where they return to the conflict area of Tigray, others are going to Hashaba in the state.

However, most of the refugees are heading for Libya where they will risk their lives attempting to reach Europe.

“I have four friends who went to Libya; the last call I had with them was two months ago,” says Ben, a 24-year-old man living in Al-Tanideba camp.

“They know the danger, I tried to tell them many times, but we cannot blame them. Look at this place, they go out of pure despair.” 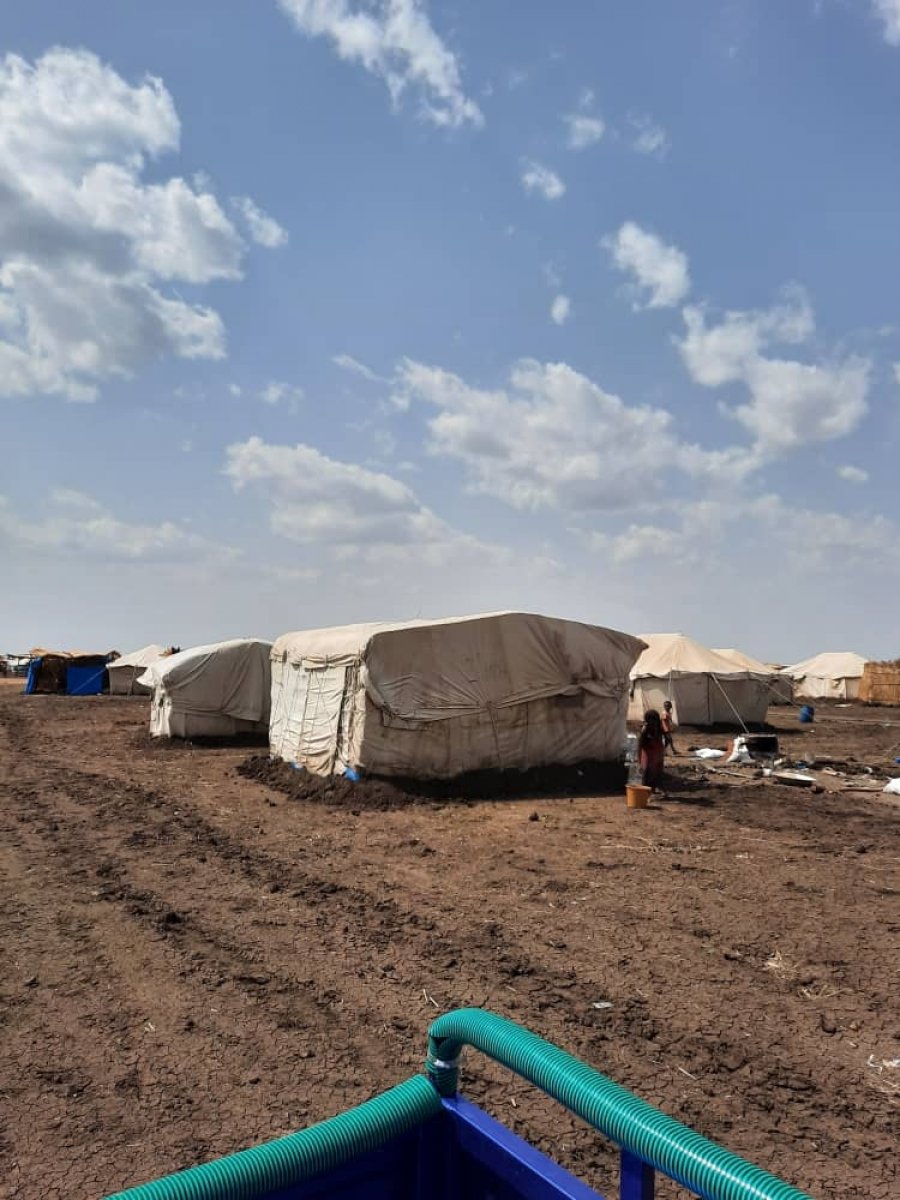 MSF/
Some of the reinforced tents in Al Tanideba camp. The only tents that survived the extreme winds. Some refugees had managed to reinforce their tents in advance, but most lacked the material and funds to do so.

MSF has been working in Al-Tanideba camp since December 2020.

MSF water and sanitation teams have constructed latrines and an emergency water treatment plant for the refugees.