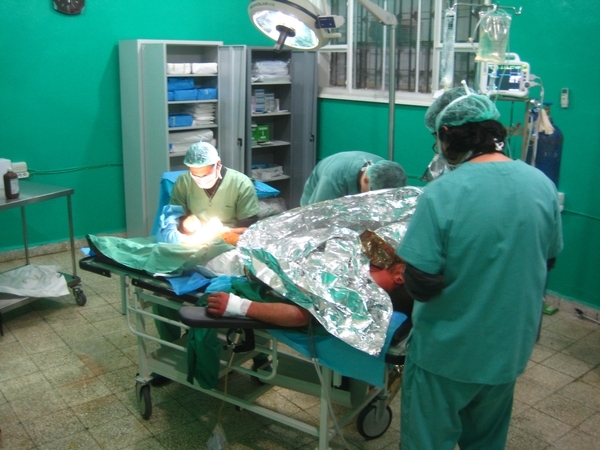 At least 20 people were killed and 99 were injured when warplanes bombed a market in Azaz, northern Syria on 13 January, according to the international medical organisation Médecins Sans Frontières/Doctors Without Borders (MSF). Twenty of the wounded, all of them civilians, were treated in an MSF medical facility.

The attack on the market in Azaz, near the Turkish border, was particularly devastating as it came just two weeks after airstrikes hit the city’s health facilities, making it almost impossible for medical staff to cope with an emergency on this scale.

The injured were transported to medical facilities elsewhere in the region, including an MSF field hospital in the Aleppo area. Five people were dead on arrival at MSF’s field hospital, while 20 wounded, including five children, were treated in the same facility.

“The cars and ambulances kept on coming and patients flooded the hospital,” says Adriana Ferracin, an MSF nurse in Syria. “We received many patients with limb amputations, head injuries and bleeding eyes and ears.”

At hospitals elsewhere in the area, including Kilis hospital on the Turkish side of the border, 15 people were dead on arrival and 79 received treatment for their injuries.

The city of Azaz, in the Aleppo region, has been bombed several times in the past few months. In December, warplanes bombed a public hospital, thus diminishing their capacity to provide medical services to the population, and making many people fearful of going to hospital for medical care.

“Even after the airstrikes on medical facilities in the Aleppo region, local doctors and nurses remained committed to providing medical care and are doing their best to help the population,” says Shinjiro Murata, MSF head of mission in Syria.

Focus on pregnant women, children and the most vulnerable

MSF’s field hospital in the Aleppo region – one of the three it is currently running in Syria - provides emergency, obstetric and primary health care. The focus is on pregnant women, children and the most vulnerable. In the past month, there were 110 surgical operations and 70 deliveries, while 1,500 patients received treatment.  MSF witnessed an increase of pathologies with the onset of the winter and remains concerned about the access to treatment for patients with chronic diseases.

Violence is hitting an already vulnerable population with a limited access to medical care and food. The spiralling prices of essential supplies such as bread, wood and clothing are further worsening the population’s living conditions. Many people are unwilling to go to hospital, out of fear that they will be targeted by airstrikes, and prefer to seek medical care in clandestine structures.

MSF staff have also witnessed the consequences of violence in the neighbouring province of Idlib. A team that returned recently from a northern city in this region which was repeatedly bombed over recent months reported that the only medical facility still functioning there is a secretly run clinic, staffed by local people and a few Syrian health workers.

MSF is working in three hospitals in the north of Syria, in areas controlled by armed opposition groups. MSF medical teams are providing emergency care, surgery, maternal care and are carrying out regular consultations. Between June 2012 and early January 2013, MSF teams conducted more than 10,000 consultations and performed more than 900 surgical interventions. MSF is also providing medical and surgical services to Syrian refugees in Jordan, Lebanon, and Iraq.